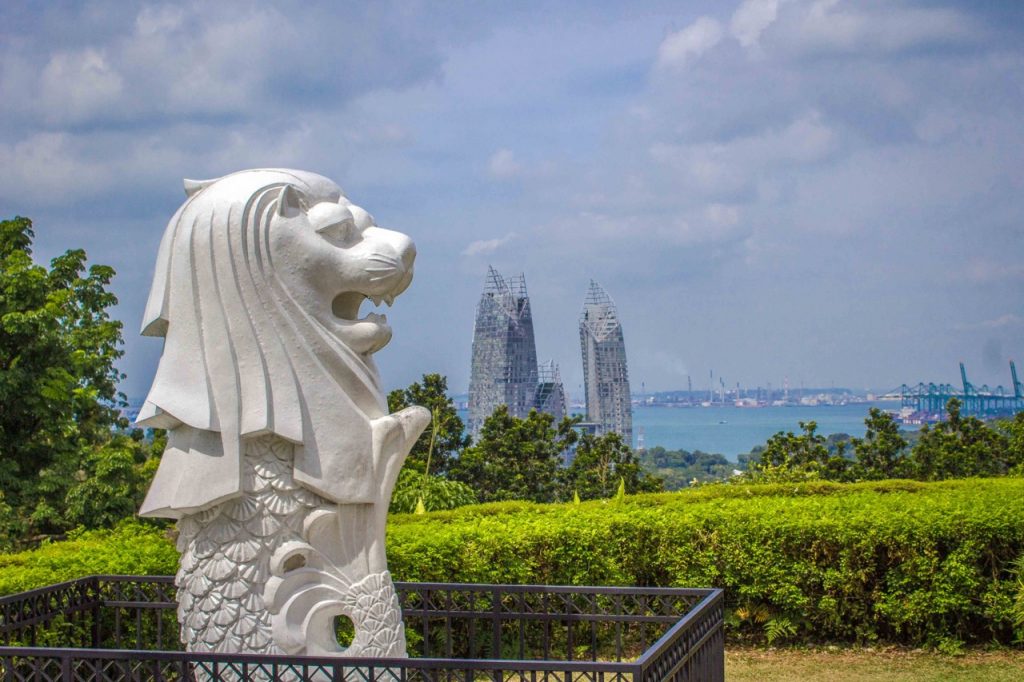 Unlike the rest of Southeast Asia, Singapore is a pricey country to visit: expensive hotels, expensive restaurants (eat at the hawker centers instead!), and expensive attractions.

But we found quite a few ways to save money in Singapore while we were there, which isn’t too hard when one of our favorite activities is usually free: hiking. Besides, when you’re visiting one of the most densely populated cities in the world, few things feel better than a quiet moment in nature, away from the crowds.

Apparently, the locals feel the same way, because there are quite a few great hikes in Singapore: East Coast Park, Macritchie Park’s Treetop Walk, the Changi Coastal Walk, and Bukit Timah Reserve, to name a few. But none are as beautiful, varied, and convenient as the Southern Ridges trail.

The six-mile-long trail starts by ascending Faber Peak, one of the tallest hills in Singapore, and then follows a series of elevated walkways, paved trails, and dirt tracks a few hundred feet above the bustling city before ending at the lush Kent Ridge Park.

Palatial botanical gardens, fascinating art and architecture, and panoramic views of the city-state make the Southern Ridges trail a unique outdoor adventure and one of the best hikes in Singapore. So save some cash, breathe the fresh air, sweat a little, and get out on the trail.

This first section of the Southern Ridges trail involves schlepping over 200 feet up a series of concrete stairs to the summit of Faber Peak. The foliage is pretty dense in this section, so there’s not much to see until you reach the top.

But once you’re there, the forest opens up, revealing some amazing, unobstructed views of Singapore’s downtown skyscrapers and, on the other side, the glistening blue waters of the harbor. If you haven’t become acquainted with them already, this will also be your first chance to see the ubiquitous Merlion statues. 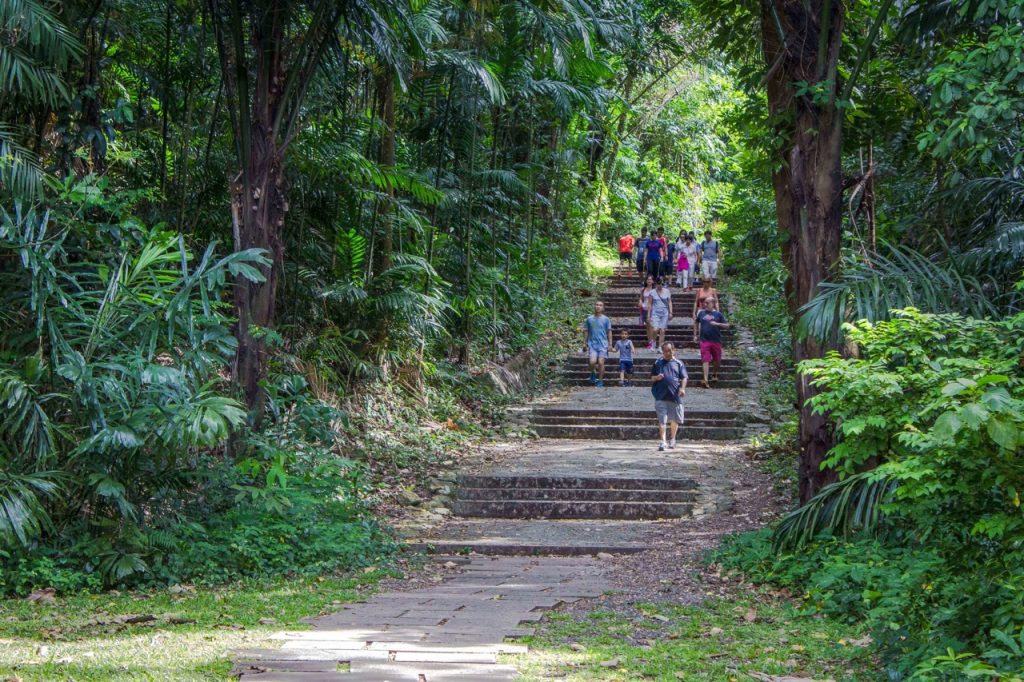 Other than hiking the Southern Ridges trail, the main reason most visitors come to Mount Faber Park summit is to ride the cable car. Gondolas take visitors from Faber Peak down the hill to the Harbourfront Centre and across the water to the resort island of Sentosa and its many attractions.

I didn’t do the ride, but it was fun to watch the little black cars seemingly float through the air toward the harbor. From the cable car station at the summit, it’s a peaceful walk along the top of the ridge down to the famed Henderson Waves. 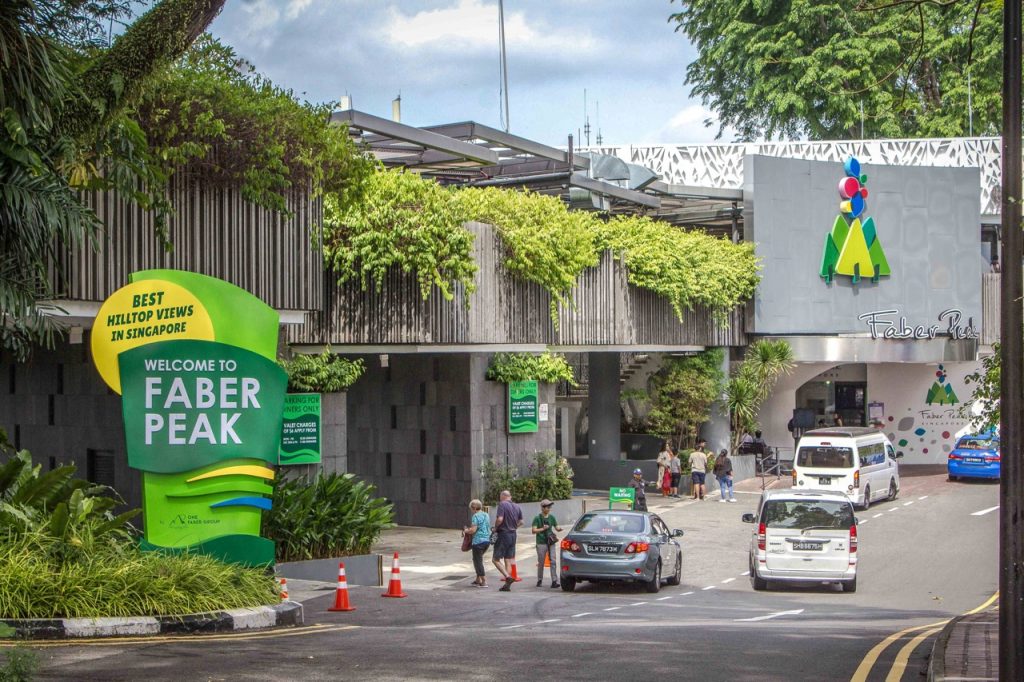 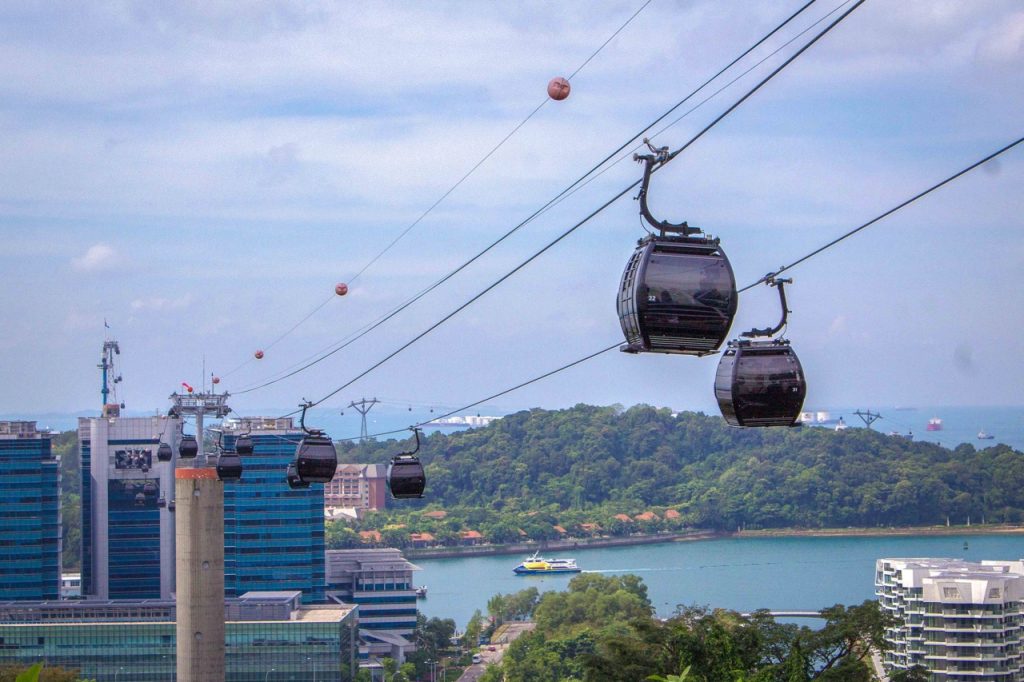 This section is the main reason the Southern Ridges trail is rated as one of the best hikes in Singapore. Installed in 2008, the nearly thousand-foot-long Henderson Waves hovers a hundred feet above the ground. The space between the curving metal supports and the more-or-less flat deck provides shelter from the frequent rainstorms and blistering sun the area is known for. If you visit in the evening (7:00pm-2:00am), those beautiful curves are illuminated by the warm glow of LED lights.

The Henderson Waves is a fairly short section of the trail, but it does leave a lasting impact by demonstrating how something as simple as a walkway can be transformed into a piece of art worth traveling across the city for. Features like this are part of what makes hiking in Singapore such a unique experience. 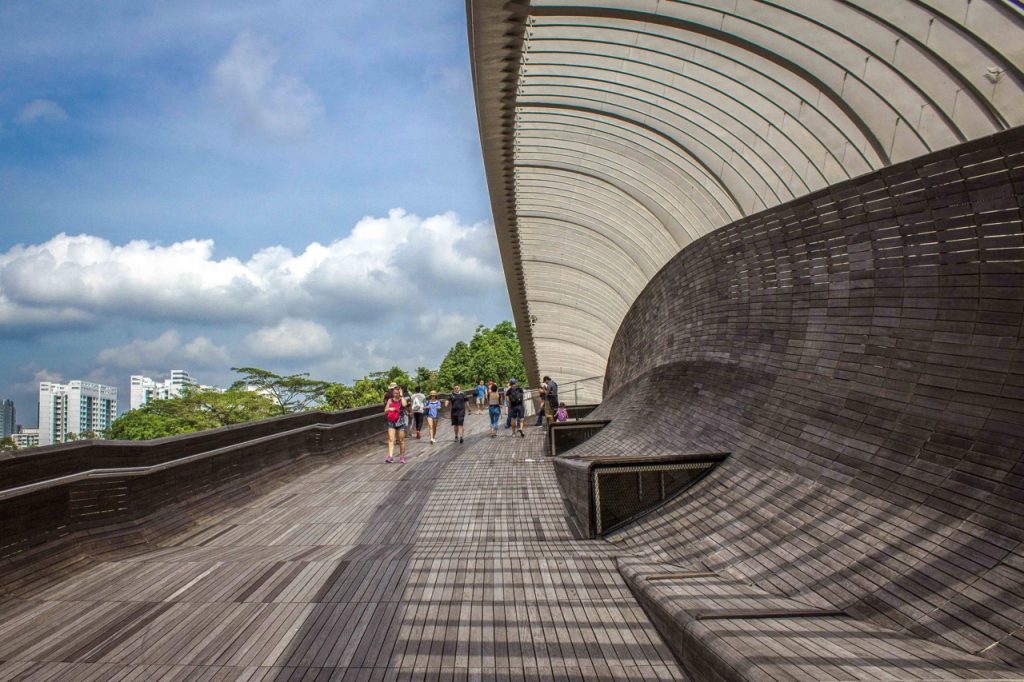 Following the Henderson Waves is the nearly mile-long Forest Walk, a series of metal catwalks that wind their way through the forest canopy. Most visitors love this section for the city views that are visible through the gaps in the foliage. Staircases connect the catwalk to ground-level trails at several points, and exploring the area on the ground is a completely different experience. 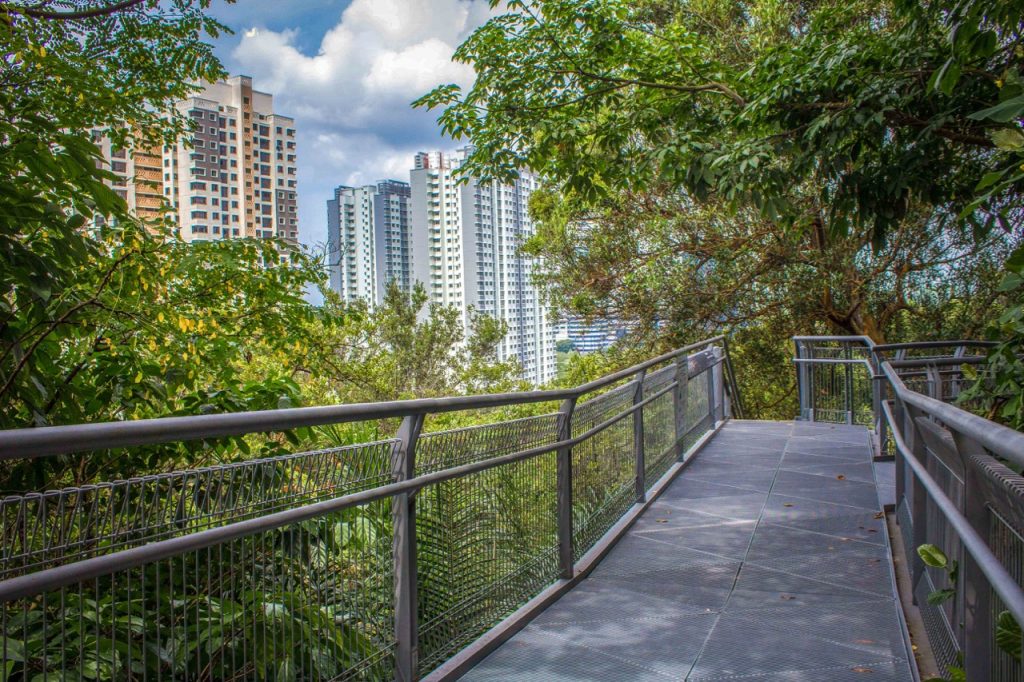 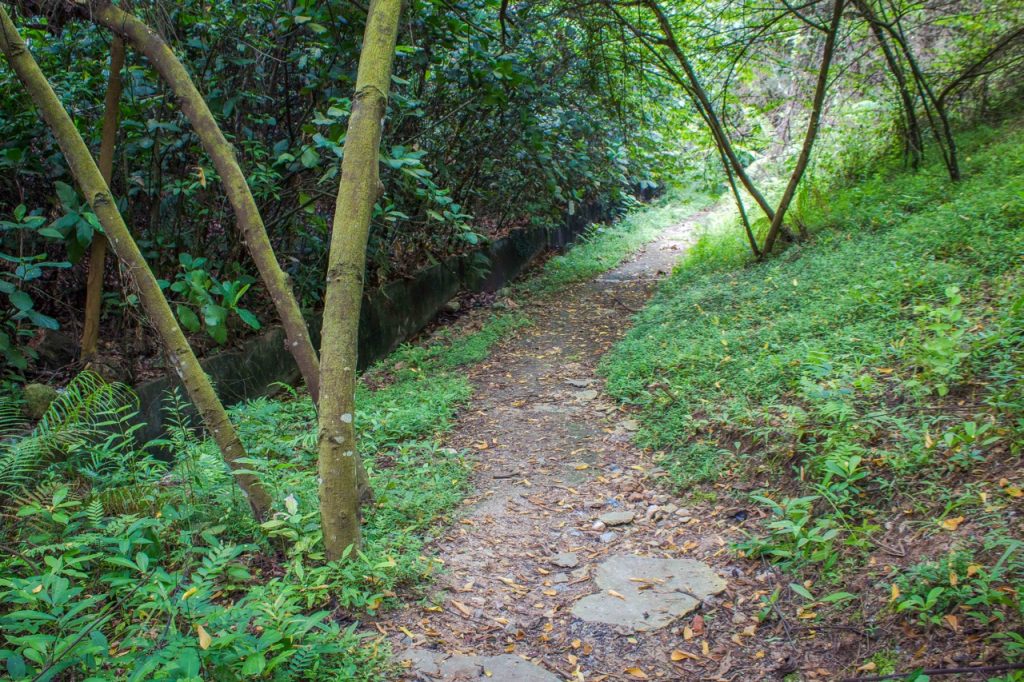 After the Forest Walk comes one of the Southern Ridge trail’s other famous landmarks, the Alexandra Arch. This 250-foot steel-framed bridge connects the busy Hyderabad and Alexandra Roads; but more than just a practical walkway, it’s a work of art, designed to look like a leaf opening in the wind.

The top overlooks Gillman Barracks, a hip neighborhood home to a number of restaurants and art galleries. The bridge is also the gateway to HortPark’s botanical gardens.

They don’t call Singapore “The Garden City” for nothing – the city-state is dotted with green spaces full of colorful flowers and elegant native plants. Many of these botanical beauties start their lives in the greenhouses in HortPark, where a variety of plants from around the world are grown. Lining the pathways through HortPark are vertical gardens, which demonstrate how plant life can be incorporated into the city’s skyscrapers. 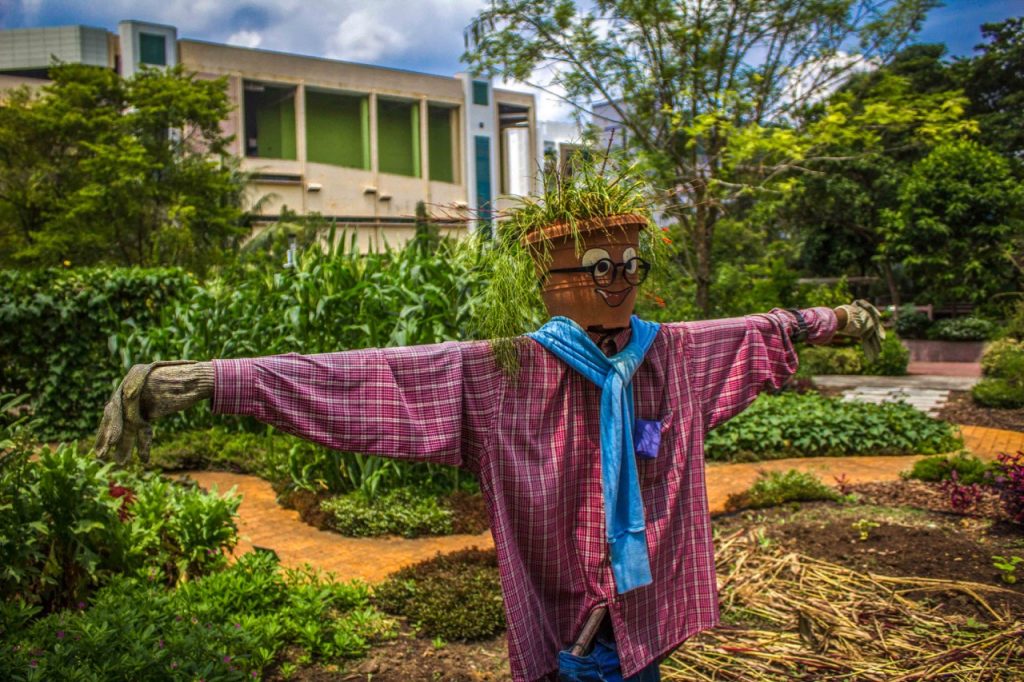 I enjoyed looking up at the vertical gardens and putting my nose to the glass of a few of the greenhouses, but I didn’t get to spend enough time poking around the park. If you have more time, there are interesting-looking guided tours of the botanical gardens and workshops that teach the gardening techniques used in them. 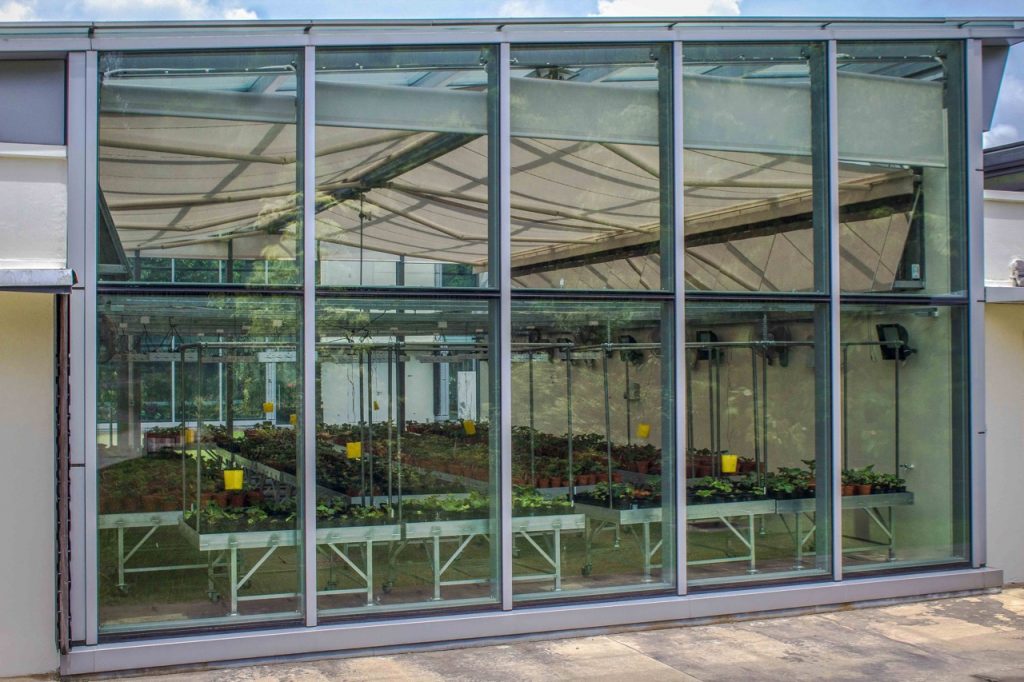 The HortPark section of the Southern Ridges trail ends with a bit of a climb to reach the next part, the Canopy Walk. However, before embarking on that section, it’s worth visiting the free Reflections at Bukit Chandu Museum, directly adjacent to the Canopy Walk’s metal staircase. A walk through the museum is a sobering experience, contrasting the suffering that occurred there 75 years ago with the tranquility of the surrounding parkland.

As a stereotypical ugly American who grew up taking history classes focused on the battles our country was involved in, I knew next to nothing about Singapore’s role in World War II. Thankfully, the museum details the Battle of Singapore and the brave exploits of Malayan and Singaporean troops against advancing Japanese forces. 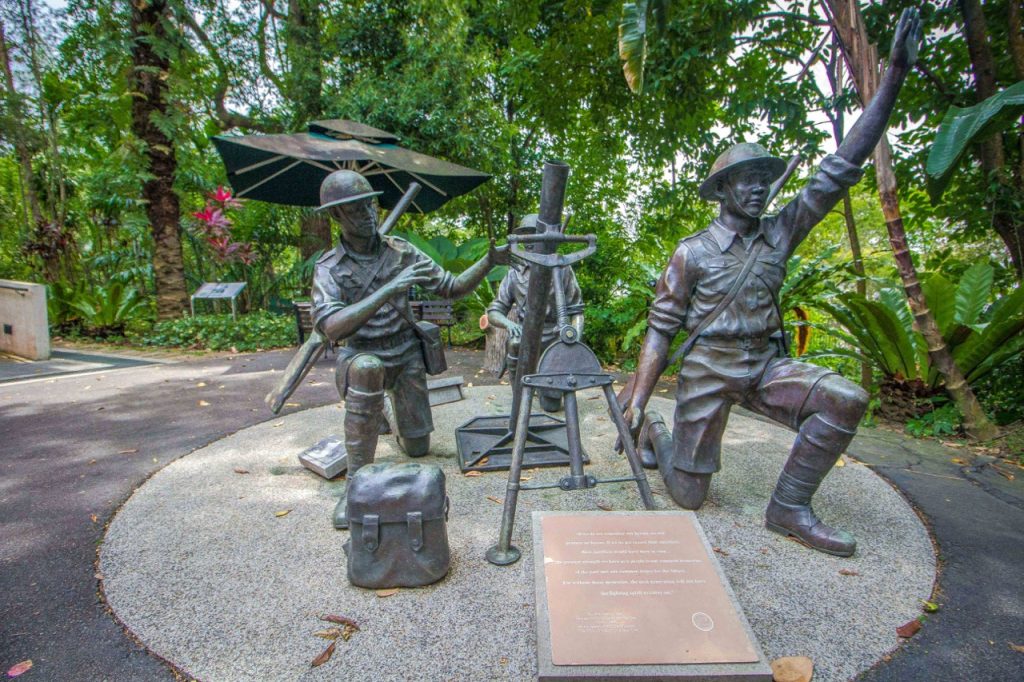 The museum is quite small, packed inside an early 20th-century colonial home, but it’s beautifully laid out to relay the historical significance of the battle. An introductory video explains how Japanese forces entered the city on bicycles, with Singapore’s immaculately paved roads allowing them to take over the country in just one week. Other exhibits play readings of soldiers’ journal entries, which convey both their devotion to their country and fear of its demise. 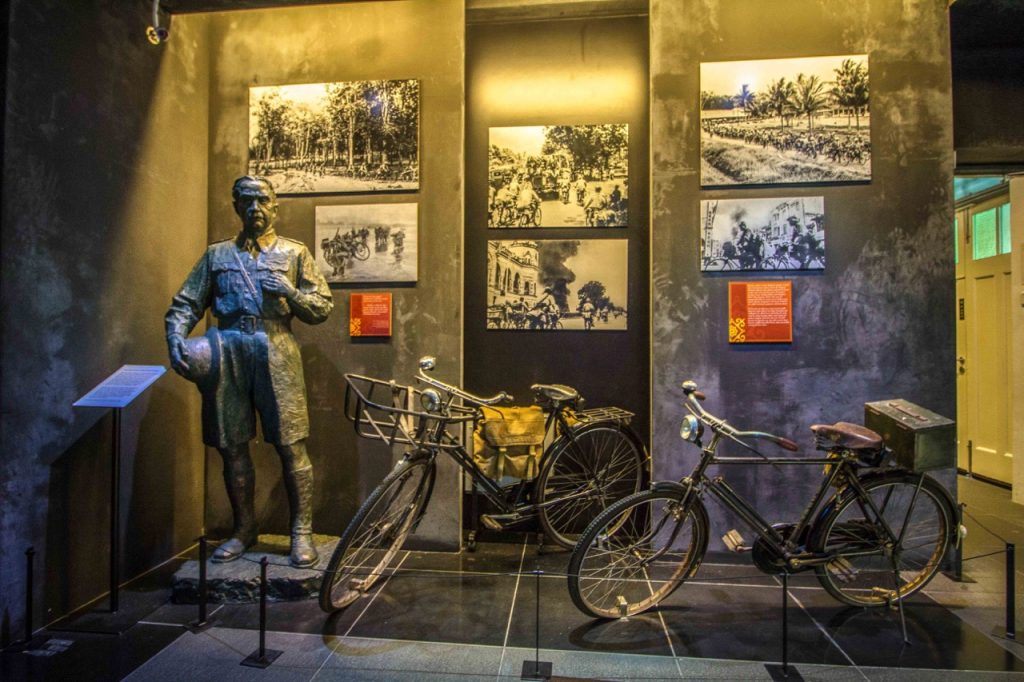 The Canopy Walk from the Bukit Chandu Memorial to Kent Ridge Park is another favorite section of many hikers visiting the Southern Ridges trail. Unfortunately, it was closed for repairs during our brief stay in Singapore, though it’s since reopened. It looks like it has some great views, but so did the rest of the hike, so it wasn’t too big of a disappointment. 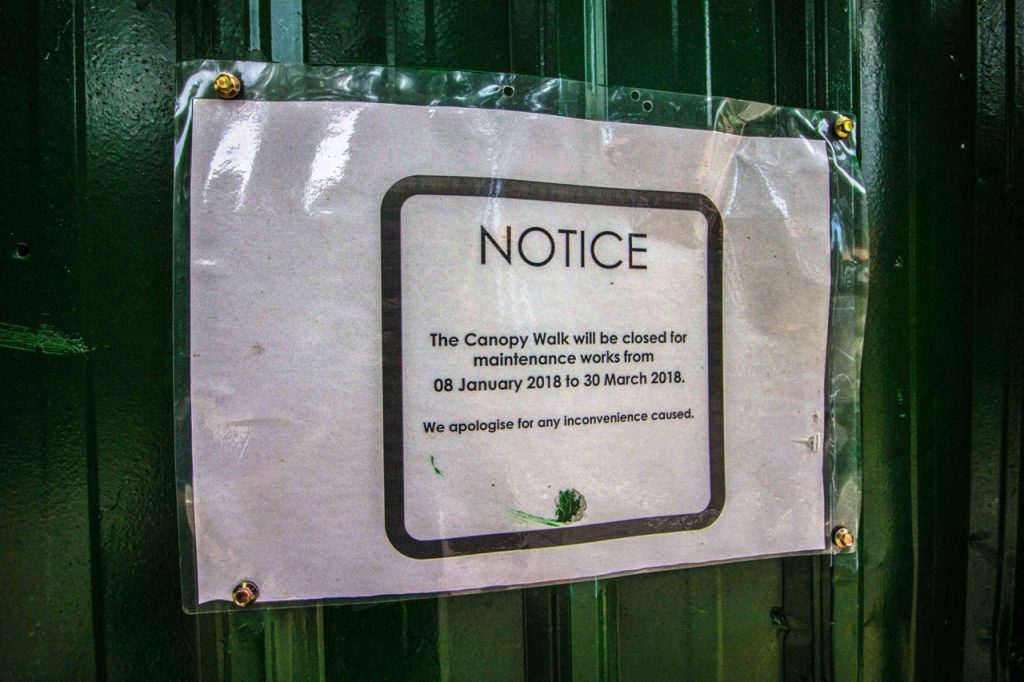 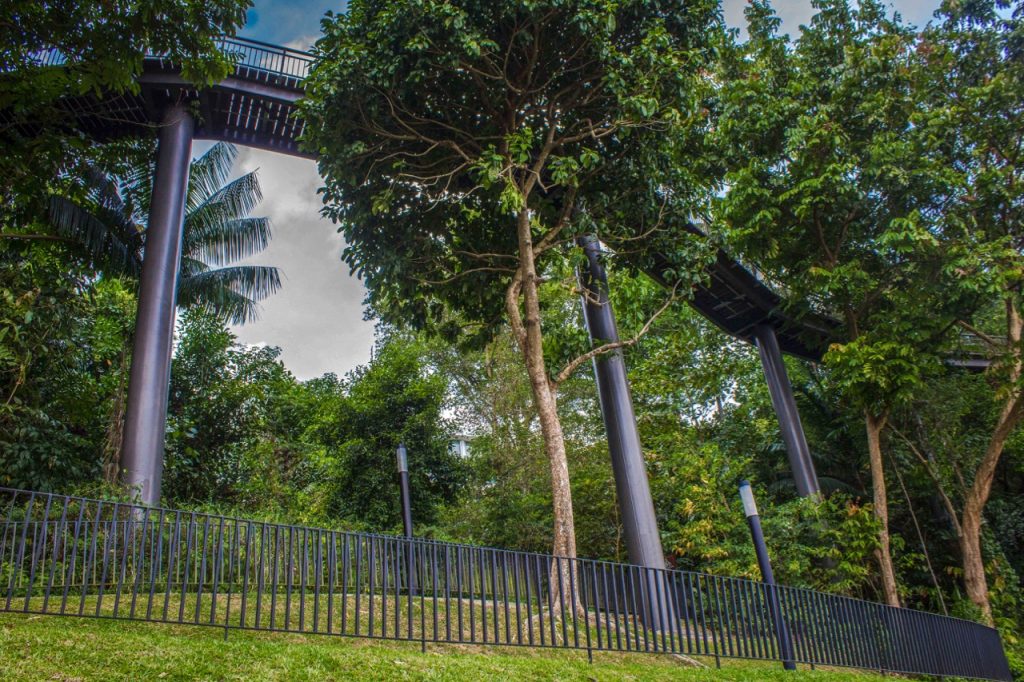 Despite being the largest park in the chain of green spaces that make up the Southern Ridges trail, there’s not much to see at Kent Ridge Park. It’s a large grassy area with a few shaded pavilions, which does make it an excellent place to settle down for a picnic. Having tramped six miles through the forest, a rest would be in order. Unfortunately for me, it started raining not long after I got there, so I quickly headed back to the train. 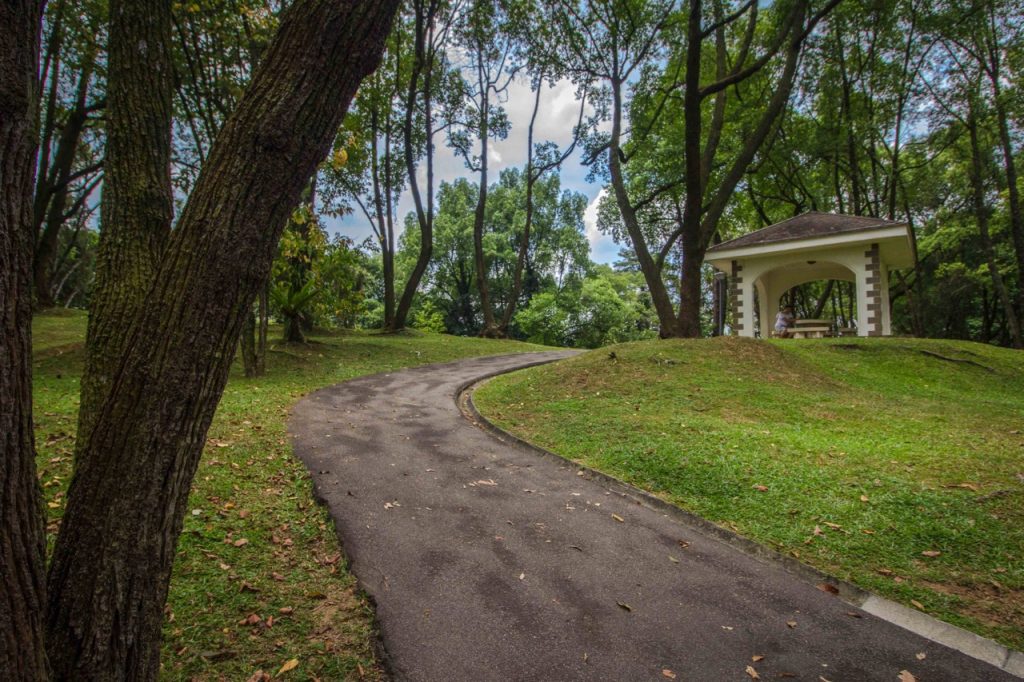 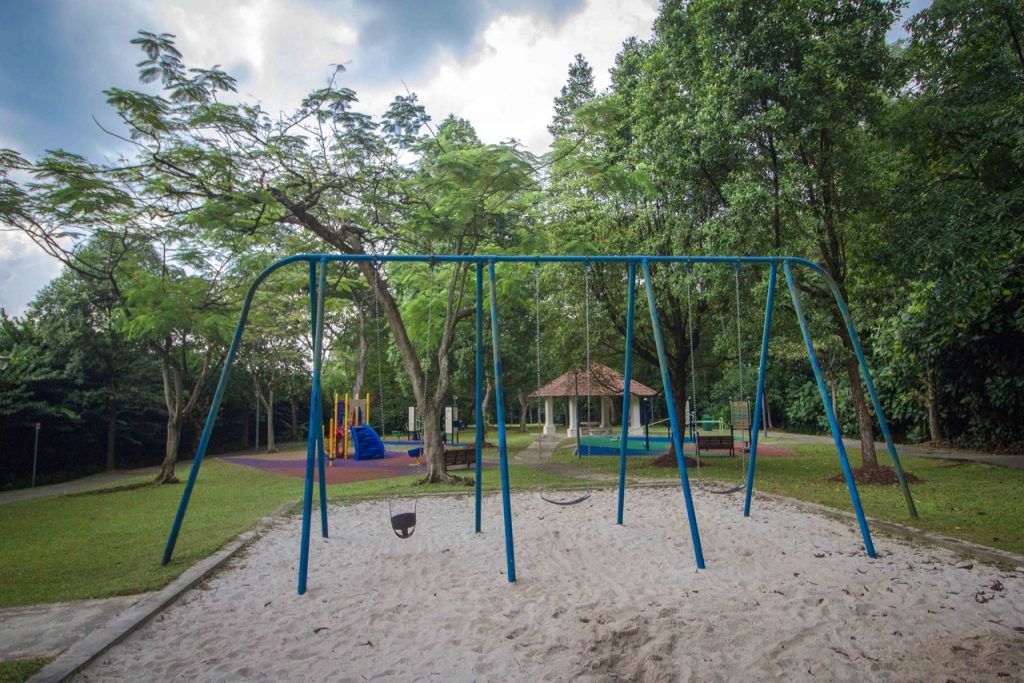 From Kent Ridge Park, you can also meander southward on South Buena Vista Road and then east on the West Coastal Highway until you reach the Haw Par Villa MRT stop on the Circle Line.

If you’ve got the time, visit Haw Par Villa. It’s a free museum-cum-theme park, and the famous Ten Courts of Hell illustrates the gruesome concept of Buddhist Hell in the most interesting (and campiest) way possible.

Planning Your Hike on the Southern Ridges Trail

Start your hike as early as possible to avoid the hottest part of the day. Much of the Southern Ridges trail is shaded, but that’s of little comfort when the humidity is close to 100%. Remember to bring plenty of water, too; there are a few drinking fountains along the way, but it’s best not to rely on them.

Hiking the Southern Ridges trail is super convenient with Singapore’s ultra-modern public transportation system, the MRT. With five train lines crisscrossing the city, it’s probably no more than a fifteen-minute walk to the train station from wherever you’re staying.

Most people hike the Southern Ridges trail from east to west, like I did (starting at the trailhead at the bottom of Faber Peak and ending at Kent Ridge Park). To get to Mount Faber Park, ride the MRT’s Purple or Circle Line to the HarbourFront station. Use the elevated walkways to cross the busy street and head up the hill where you’ll see signs for the Marang Trail to Faber Peak.

The Joy of Hiking in Singapore

Urban development so often seals us off from nature, cloistering us in concrete jungles away from the fresh air and open spaces that keep us healthy. With a few notable exceptions, like Central Park, cities are usually built without much regard for these necessities, a problem that seems to be even worse in Southeast Asia. Though we’ve enjoyed visiting the parks in Bangkok and elsewhere, the concept of hiking in most of the region’s cities would be laughable. 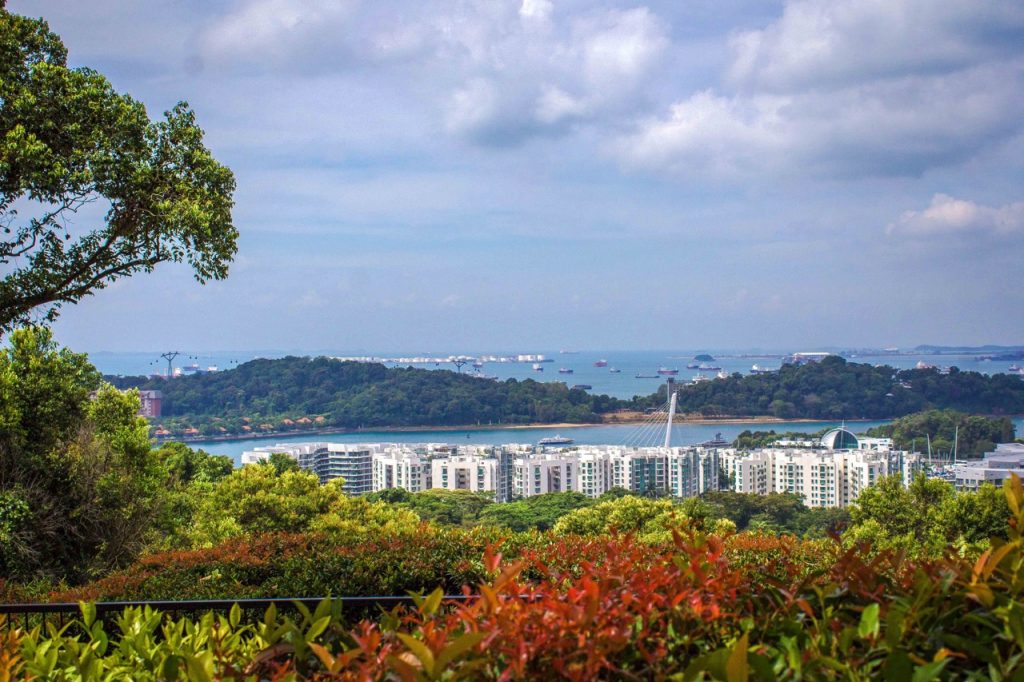 Fortunately, Singapore is an exception, even though the island is one of the most densely populated areas of the planet. Sizable sections of nature have been carved out and protected, and often complemented by unusual art and architecture, making hiking in Singapore the perfect escape from city life.

Do you have any favorite hikes in Singapore? 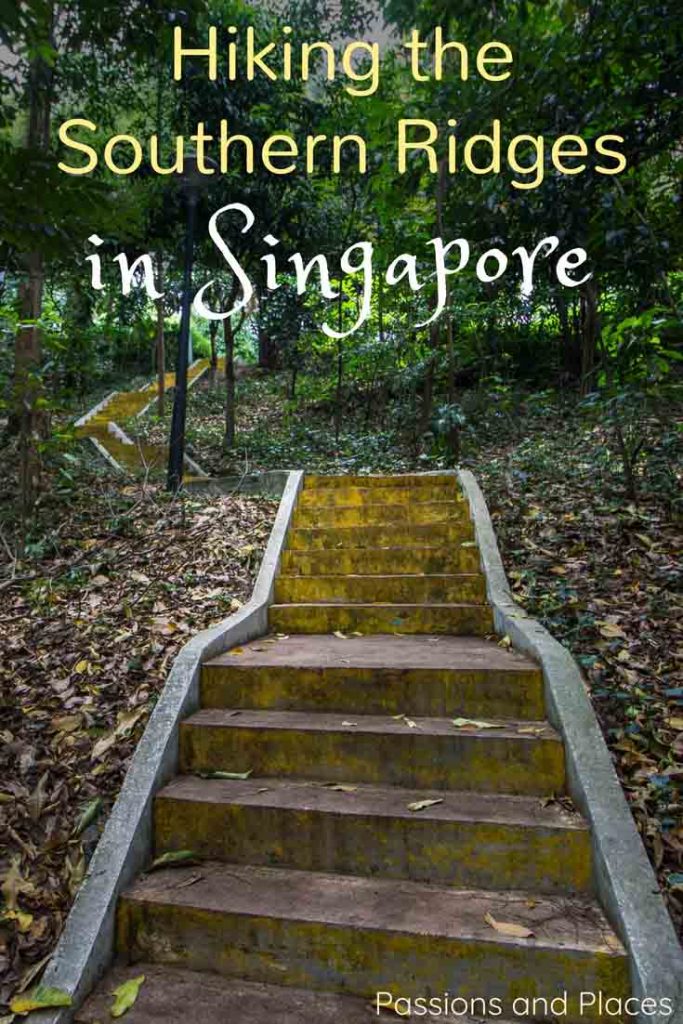 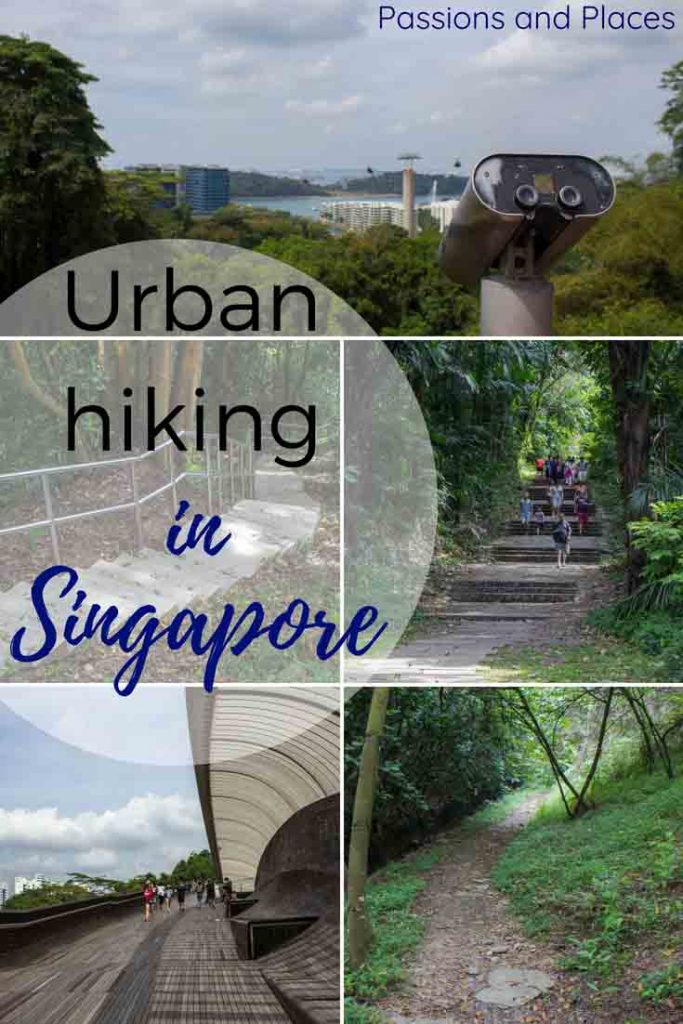