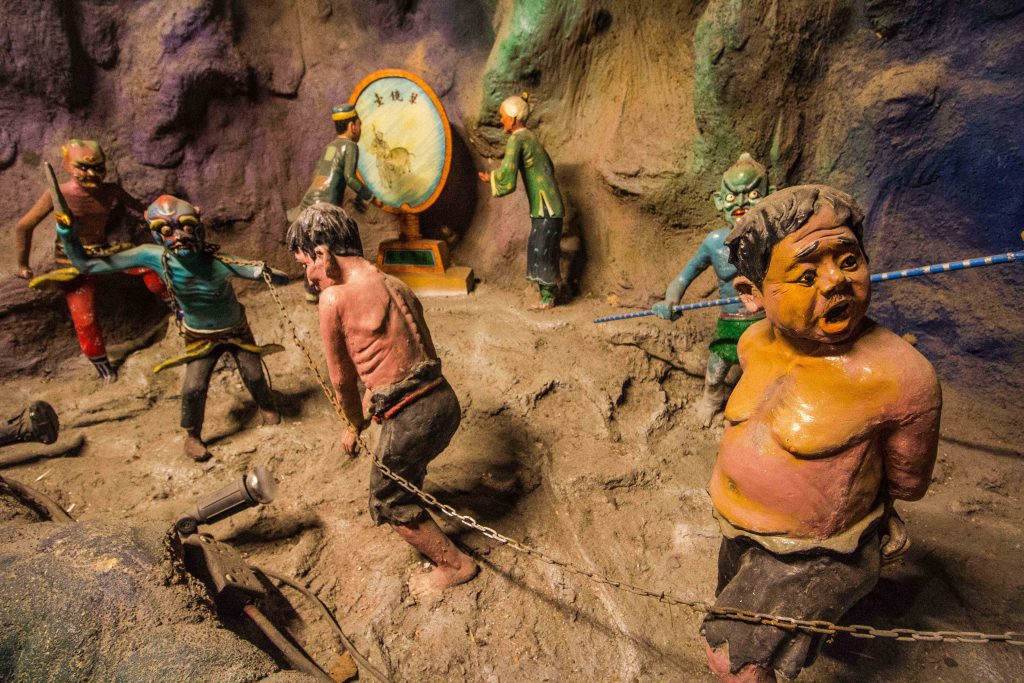 If you like to seek out offbeat things to do when you travel (or you just have a strong morbid curiosity), you’ll be delighted to hear that Singapore has a museum all about hell. Buddhist hell, to be exact – all ten courts of it.

Built in the 1930s in an effort to impart traditional Chinese values on the Singaporean population, Haw Par Villa has become a favorite stop for Atlas Obscura-loving travelers looking for a taste of the weird. The park is filled with quirky statues depicting characters from Chinese mythology, many of which look like something out of a Chucky Cheese nightmare.

This bizarre museum-cum-theme park was the brainchild of the Chinese brothers who founded Tiger Balm (the camphor- and menthol-infused muscle rub that’s considered the cure for just about every ailment in Asia). Having earned a fortune in business, they endeavored to make a lasting mark on the growing city-state’s moral compass.

After opening in 1937, Haw Par Villa saw just one decade of visitors before the Japanese invasion of Singapore during World War II, when the park and its buildings were converted into a lookout post for soldiers watching over the harbor.

After the war, Haw Par Villa underwent a makeover to repair the damage done by the Japanese, and it was then that school groups started flooding in, as the brothers had intended. But by many accounts, the creepy exhibits are not remembered fondly by the children who visited.

In the mid-1980s, the Singaporean government took ownership of the park and, after doing some restoration and creating an acrobatics exhibit, began charging a hefty fee for admission. There was a steep decline in visitors over the next ten years, until the government decided to make admission free in 1997.

Today, guided tours are available for about $10, but there’s no fee for exploring on your own, and visiting free attractions like this is one of the best ways to travel on a budget in Singapore. The majority of the park’s visitors are there for just one reason anyways: the Ten Courts of Hell exhibit, which doesn’t require a guide to understand.

The ten courts depict the Buddhist concept of the afterlife, and it’ll turn everything you thought you knew about Buddhism upside down. There’s no peace, meditation, or jolly Buddhas to be found here – just blood, guts, and various instruments of torture.

From the outside of Haw Par Villa, there’s no indication of the gruesomeness that dwells inside. With brightly-colored statues and small canopies to shade weary tourists, it looks more like the exterior of a mini-golf course.

A few hundred feet later, though, the weirdness begins: a large statue of a crab’s body with the head of a boy – he’s smiling, which only makes it worse. A little farther, and you come upon the entrance to the Ten Courts of Hell inside a large concrete cavern. Let the punishments begin…

The Ten Courts of Hell

The exhibit’s First Court of Hell isn’t really hell as we’d normally think of it, but more of a courtroom, where a king presides over the trial of each soul. Those who have committed only good deeds in their life (not sure who these goody-two-shoes are…) take a trip over a golden bridge, and those who’ve done more good than bad walk over a silver bridge. 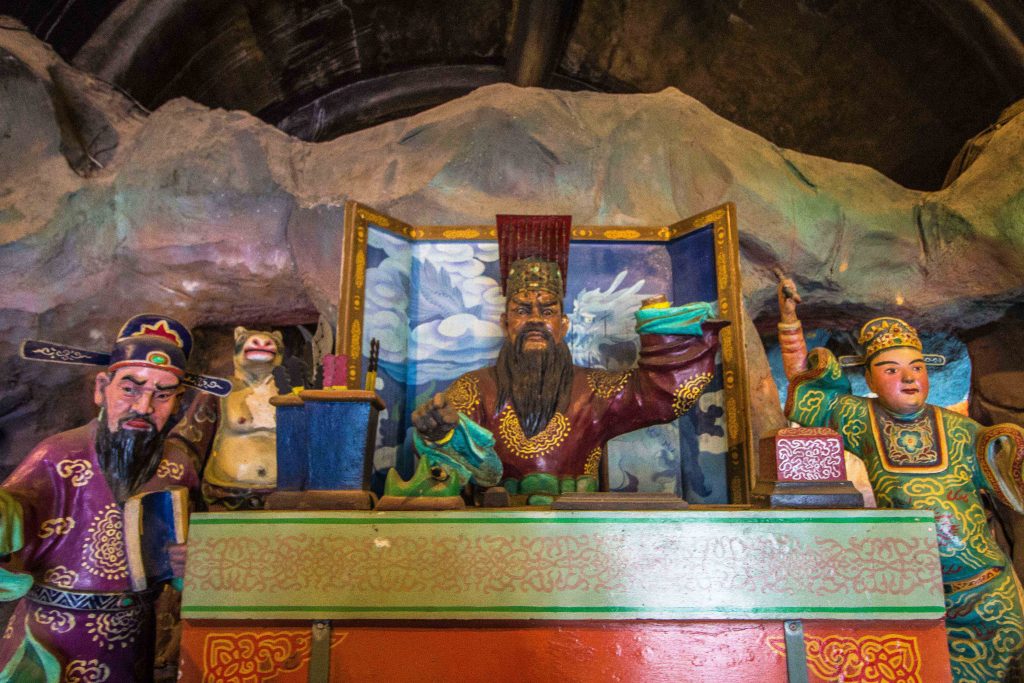 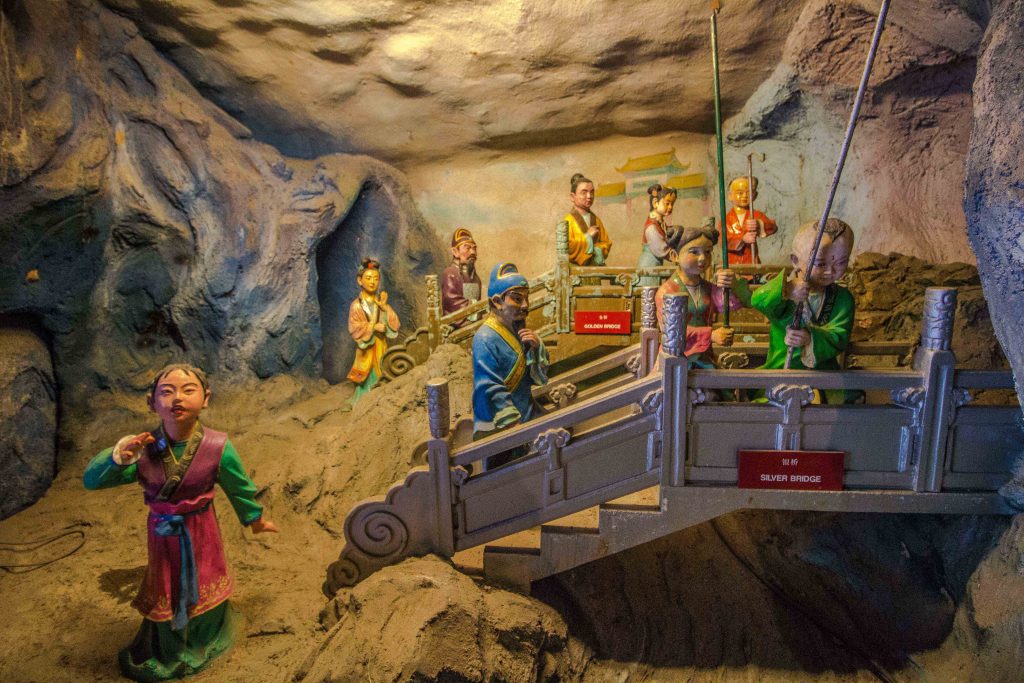 However, the many whose sins outweigh their good deeds are the subject of the rest of the Courts of Hell. They must repent for their sins, and it seems it has to be in the most disturbing ways possible.

Each of the remaining courts depicts the specific punishment ascribed to different types of sins. Most of the sins mentioned in the exhibit are fairly minor: rumor-mongering, disobeying one’s older sibling (filial piety is big), and misuse of books (what does that even mean?), for example.

However, these relatively small slights are inexplicably mixed in with capital crimes like murder and rape, and all of them result in torture and immense pain for the sinner. 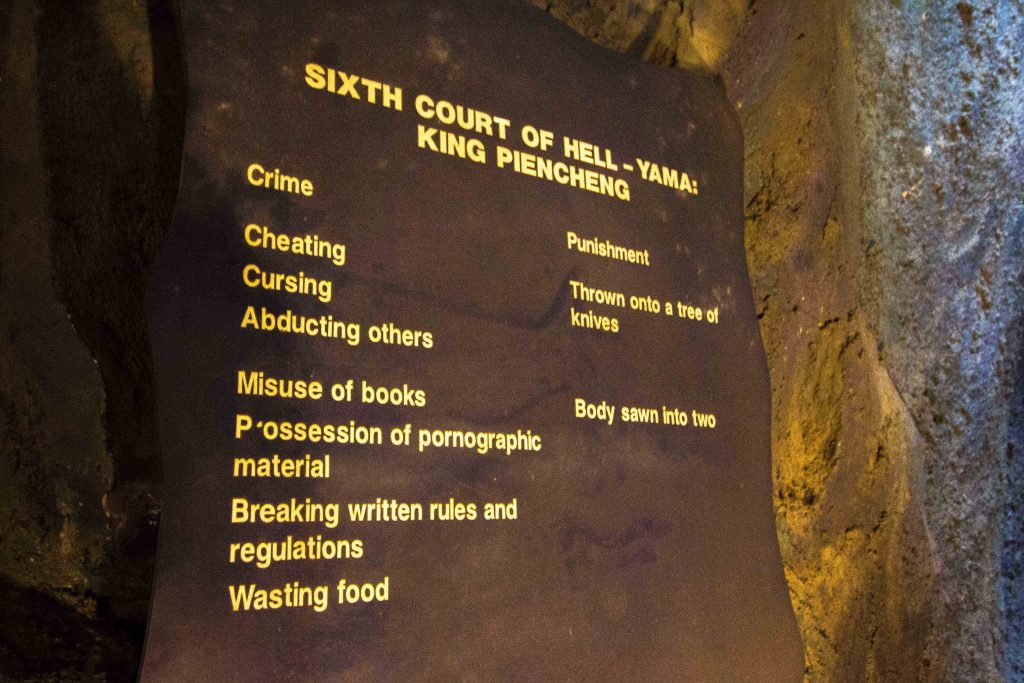 Robbers are thrown into volcanic pits, prostitutes are drowned in pools of blood, gamblers are frozen in blocks of ice. Those who’ve been ungrateful to their elders will have their hearts torn out, and your body will be sawed in two if you’ve committed that vague “misuse of books” sin. Confucian principles meets Dante’s Inferno. 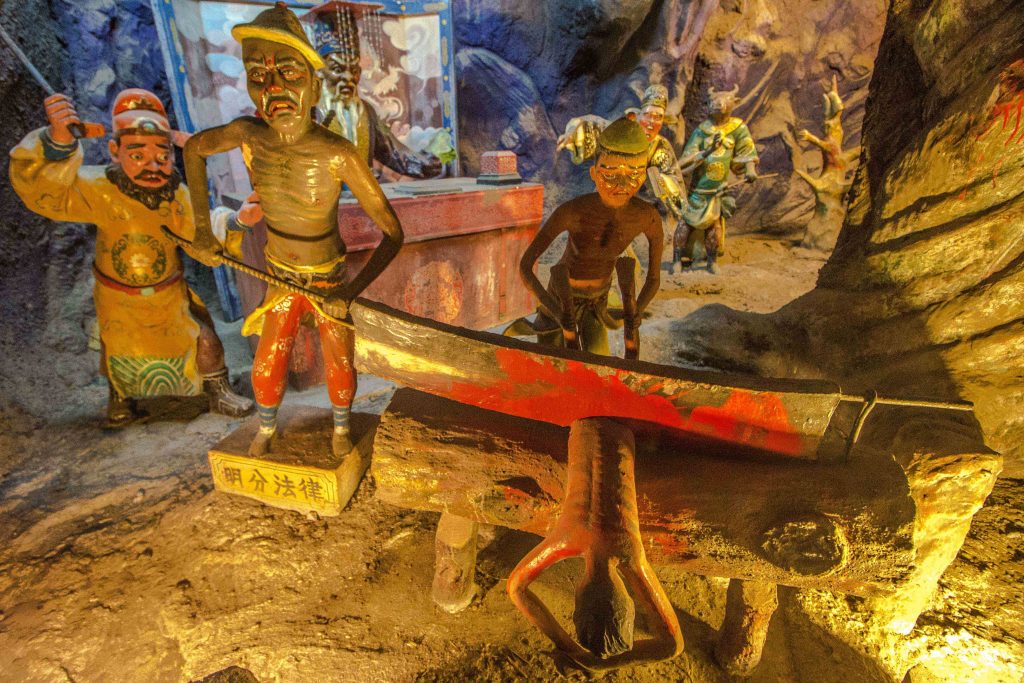 It’s only in the final of the Ten Courts of Hell that any of this brutality links back to the beliefs we usually associate with Buddhism. This is where the suffering stops. Unlike the Christian concept of hell, Buddhist hell is not for eternity. Burning in a lake of fire is a punishment used to re-educate your soul, not to condemn it until the end of time.

In the tenth court, an old woman presents the sinner with a magical tea that allows them to forget the life they’ve lived and move on to the Wheel of Reincarnation. Even though they don’t remember it, their behavior in this life determines how they’ll be reincarnated, whether it’s as a human or some type of lowly animal.

But even for the worst sinners, Buddhism always offers another chance at redemption and another opportunity to reach enlightenment. 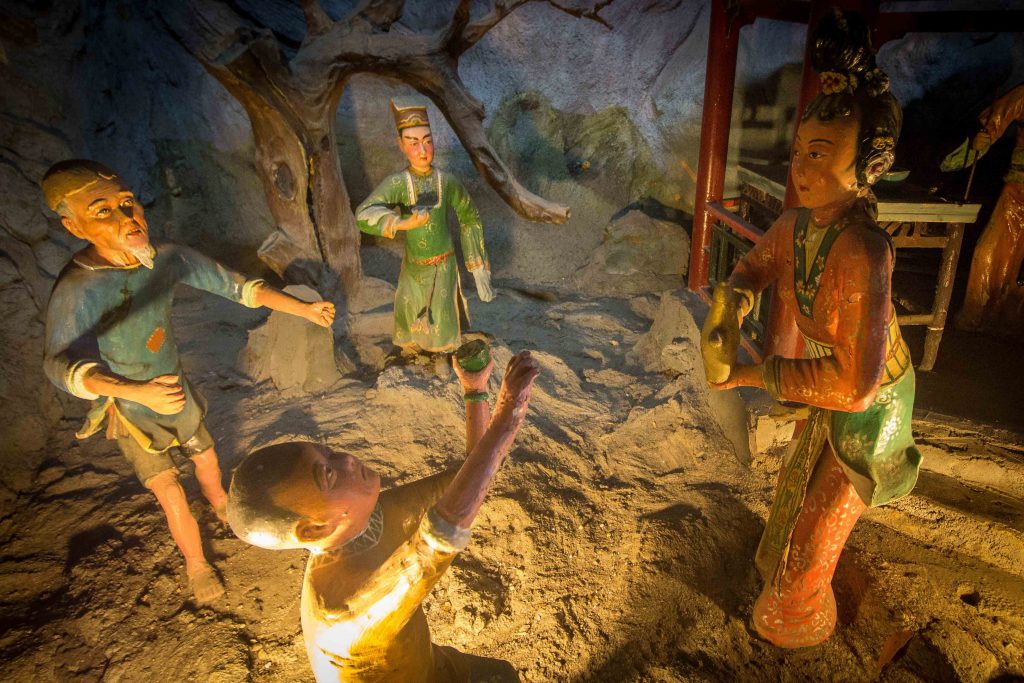 A generation ago, Haw Par Villa was a popular place to take children in the hopes of scaring them into behaving. It was a different time when people weren’t as sensitive to the way viewing such a traumatic exhibit could affect young and impressionable minds.

These days, the park is much more popular with photographers and travelers seeking out some kitsch and weirdness in the largely sterile city-state of Singapore. That’s not to say it’s lacking in value, though.

A society’s concept of hell and the punishments therein is a window into the collective psyche. In Dante’s Inferno, each circle of hell is said to be filled with souls more wicked than the last; yet prostitutes and hypocrites fall in the eighth circle, while murderers are only condemned to the seventh. Kind of makes you think about how society valued human life in the 14th century.

Haw Par Villa takes a similarly confusing moral stance, with the sin of cheating on an exam condemning you to the eighth court and having your intestines pulled out, while rape only merits the seventh court and being thrown into boiling oil. I’m not sure if this is an oversight, an actual reflection of values, or just a sign that the intended audience was schoolchildren. 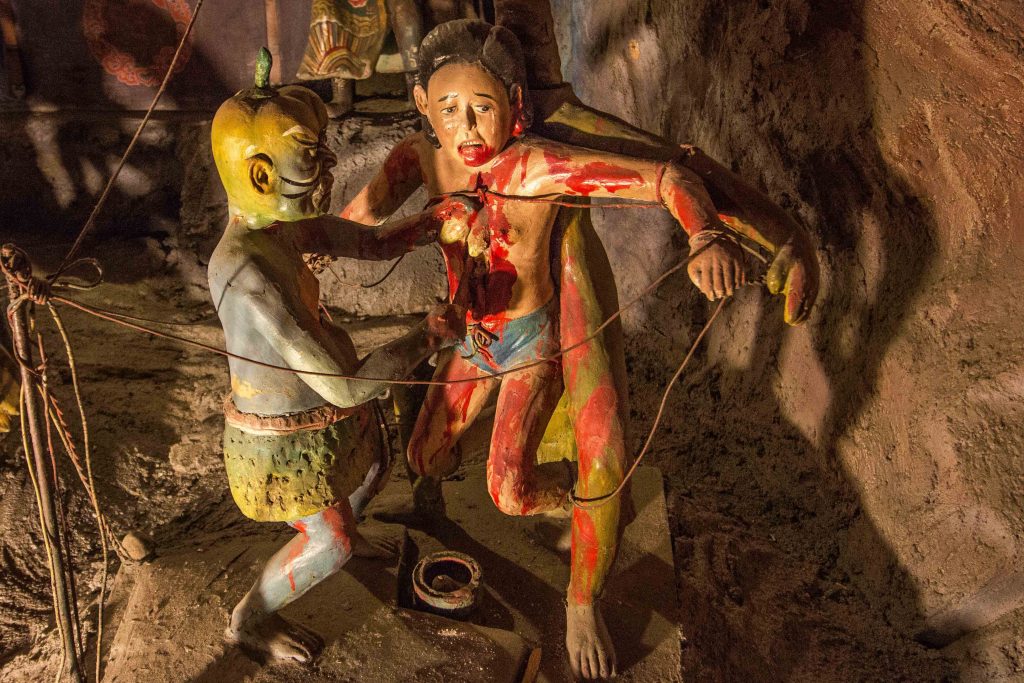 The Future of Haw Par Villa

Despite some level of popularity as an offbeat tourist attraction, declining attendance has put the future of Haw Par Villa in jeopardy. As such, the museum is making efforts to reinvent itself, and will eventually incorporate the Ten Courts of Hell into a larger “Hell Museum,” which should be more about information and less about spectacle. It will educate visitors about the concept of death, compare various cultural and religious views on the afterlife, and examine how they reflect the population’s values and beliefs.

If you’re up for it, the theme park is located just a few steps from the Haw Par Villa stop on the MRT’s Circle Line and a short walk from Kent Ridge Park and the Southern Ridges hiking trail. The Ten Courts of Hell exhibit is open every day from 9:00am to 6:00pm.

Would you be interested in seeing the Ten Courts of Hell? 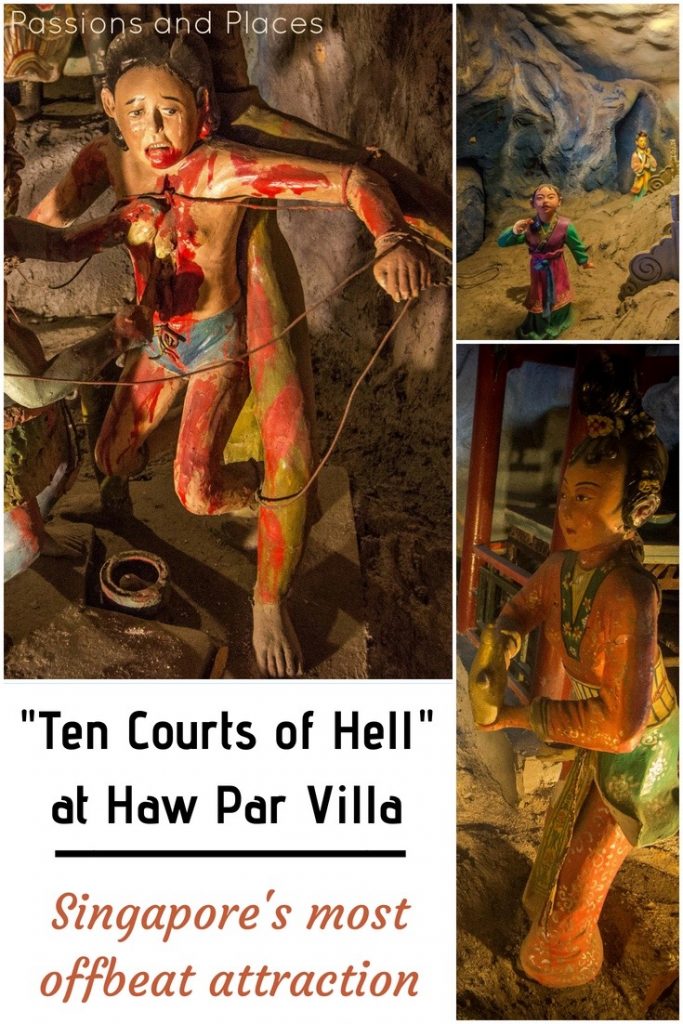 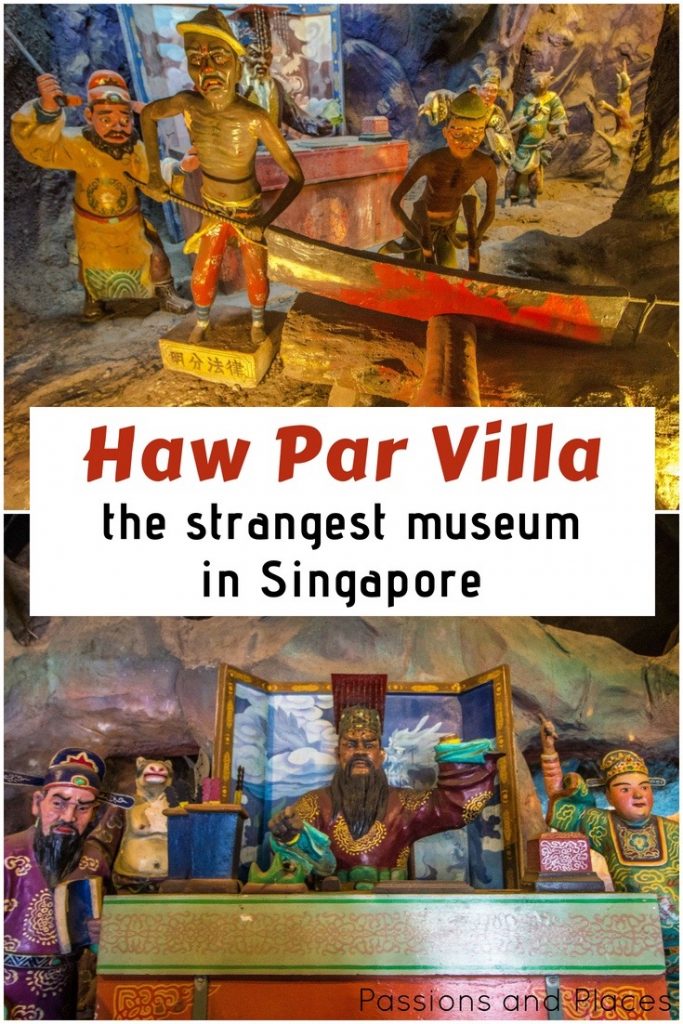