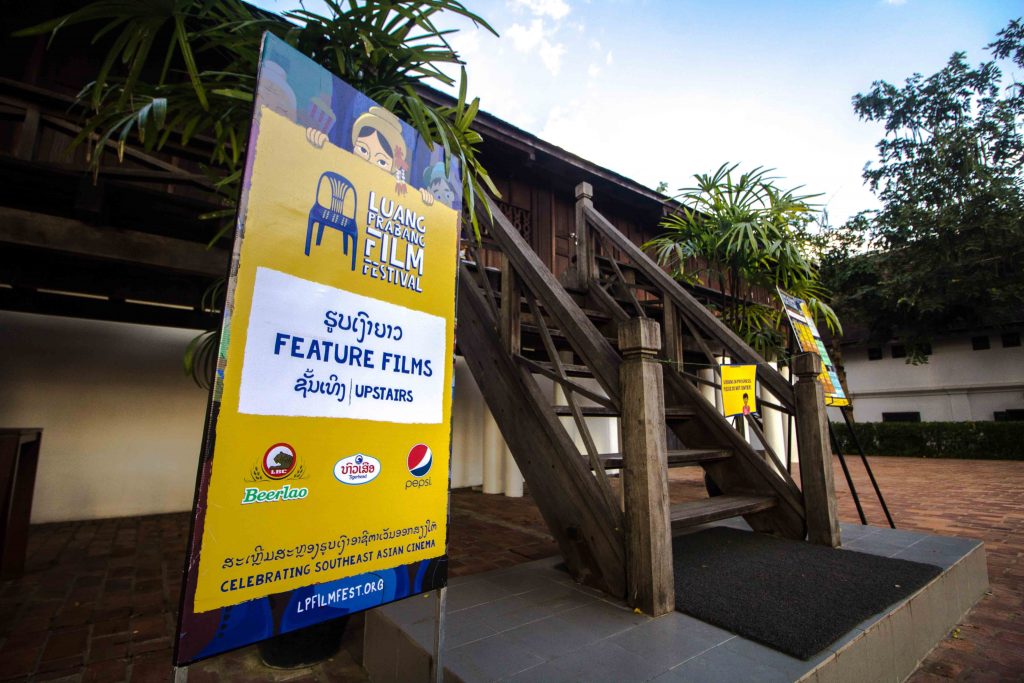 When we returned to Luang Prabang earlier this month, we planned to do a few different things, but catching a movie (or several) definitely wasn’t one of them. The most popular town in Laos doesn’t even have a movie theater (there are just two in the whole country), and the Laotian film industry produces fewer than five films a year, most on minuscule budgets.

But thanks to some serendipitous timing, our stay in Luang Prabang coincided with the town’s annual film festival, a weeklong event that screens movies from all over Southeast Asia. The whole thing is free and open to the public, and in a country that has few chances to go to the movies, the enthusiasm during the festival is contagious.

This was the eighth iteration of the Luang Prabang Film Festival, founded by an American photographer and media professional who lives in the town. Despite having a population of just 56,000 people, Luang Prabang has long been a major cultural center. A UNESCO World Heritage Site now makes up half of the town, recognizing its historical significance and well-preserved traditional and colonial architecture and making it the perfect setting for a cultural event.

A celebration of Southeast Asian cinema, the Luang Prabang Film Festival was founded to showcase films coming out of the region’s ten countries. In addition to raising awareness of Southeast Asian films, it aims to provide an opportunity for Lao people to see their own culture represented on the big screen and to watch movies they might not otherwise be able to access.

The festival’s organizers also hope to inspire and support local filmmakers in an effort to help boost the country’s nascent film industry, even providing training and offering grants through the Lao Filmmakers Fund.

In the spirit of education and celebration, the Luang Prabang Film Festival is not a competition, though one Audience Choice Award is given each year. Another unique aspect of this festival is that over half of the films shown have the filmmaker in attendance, and they often do a Q&A session after the screening.

Though the festival is organized largely by a team of Americans, regional experts guide the film selection process. Filmmakers, festival organizers, film critics, and journalists from each country in the region (except Brunei, it seems!) nominate films from their country for consideration.

All the movies are screened in their original language with English subtitles. We heard that some of the films at past festivals were shown with Laotian subtitles, but unfortunately, that didn’t seem to be the case this year.

This year, the festival screened 32 feature films, as well as a number of short films, and held cultural performances, panel discussions, and film workshops.

Each evening of the festival, the town’s popular Handicraft Market transformed into an outdoor movie theater able to accommodate 1,500 people in plastic chairs. While all the activity of the market is a little distracting, it more than compensates by acting as the world’s greatest concession stand. 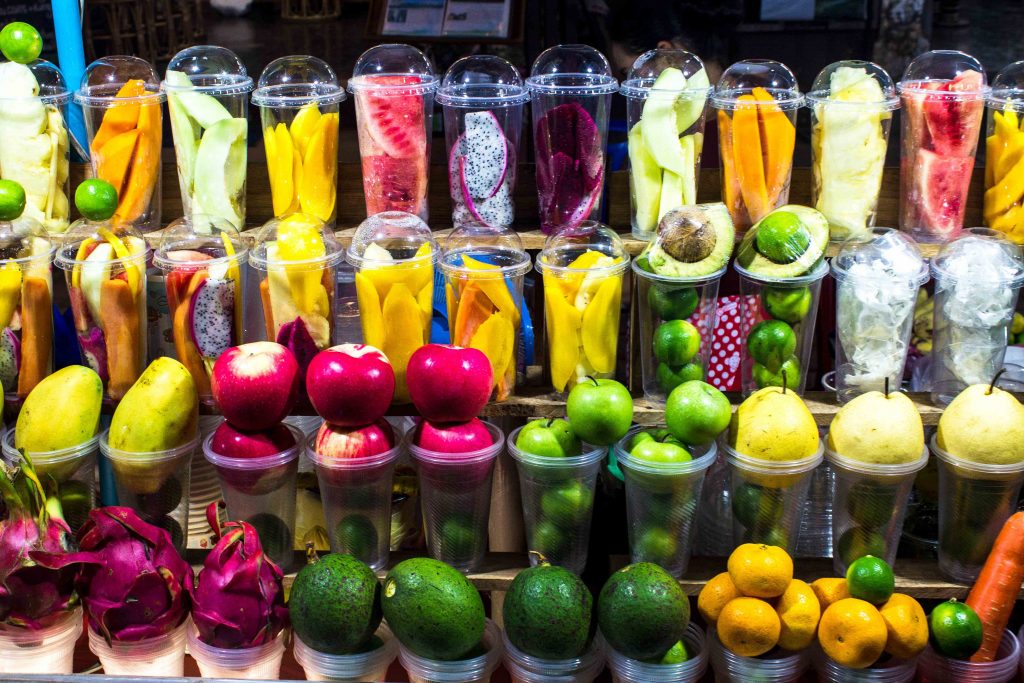 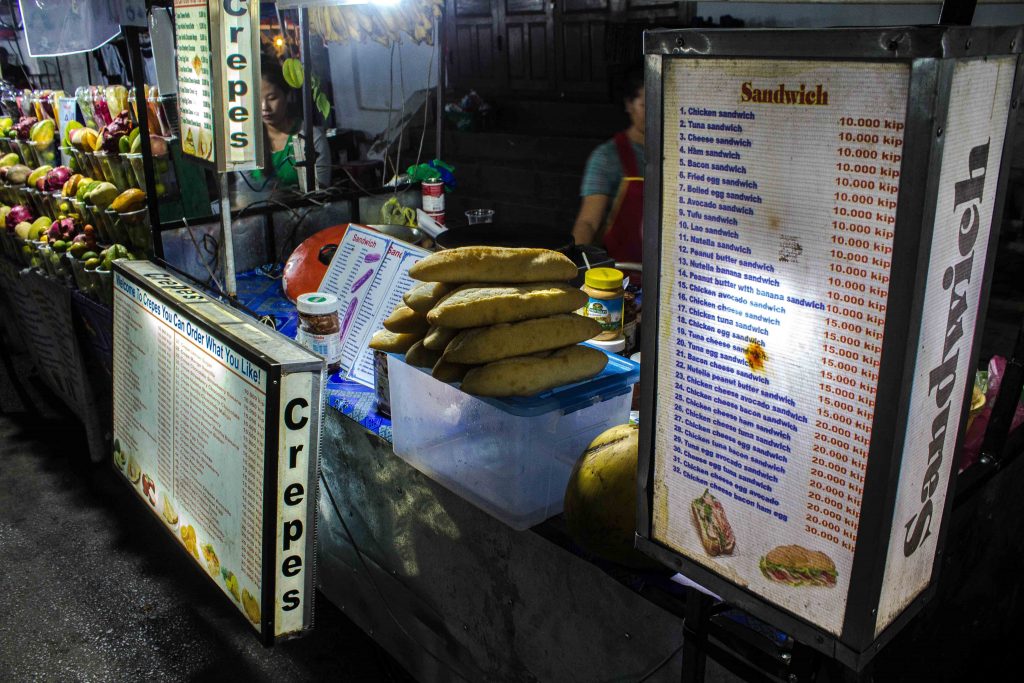 Every night before the evening films, a concert or dance performance took place. The first concert we saw was a little slow, but the other performances we caught were definitely memorable.

Groups of dancers in white tuxedos and sparkly booty shorts came out to loud music, dancing, running up and down the aisles, and riding bicycles around the small stage (it was quite the sight). After a couple songs in Lao, they switched over to English, belting out songs like “Happy” and “Shape of You,” which seems to be beloved here. 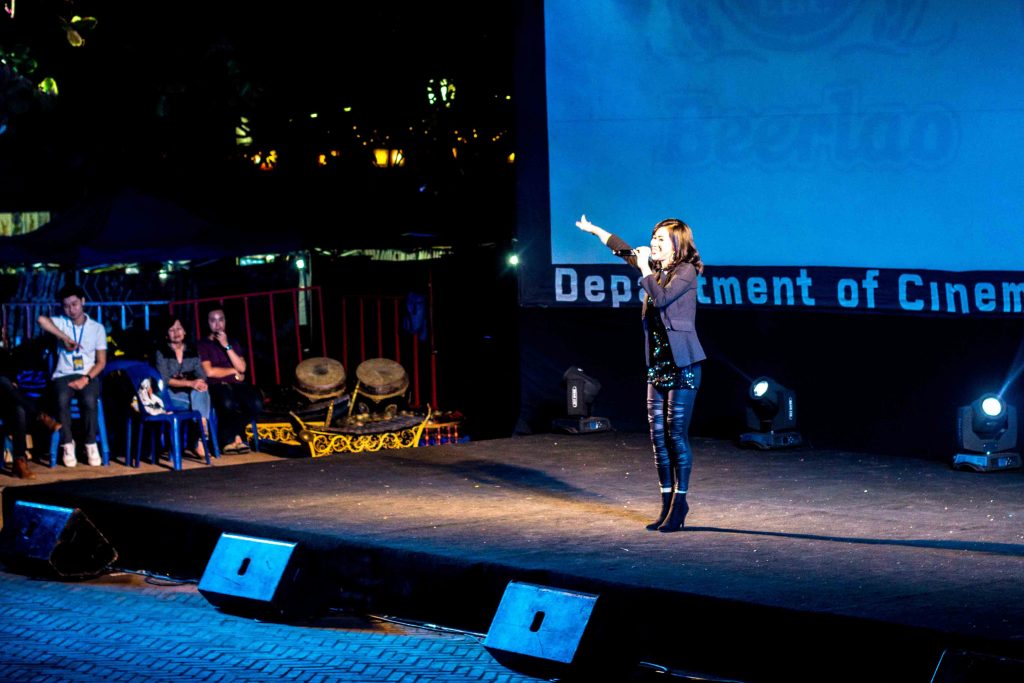 Daytime screenings were held at the Sofitel, a posh five-star hotel where the rooms are upwards of $250 a night (the height of luxury in Laos). On the nights we attended the festival, the 1,500-seat outdoor venue was packed, largely with local people. But the hotel’s venue, a wooden building filled with slipcovered seats, held just 75 people.

Despite the free tuk-tuk that shuttled festivalgoers back and forth between the two venues, the film we saw there had only 30 or so people in attendance – all Westerners. 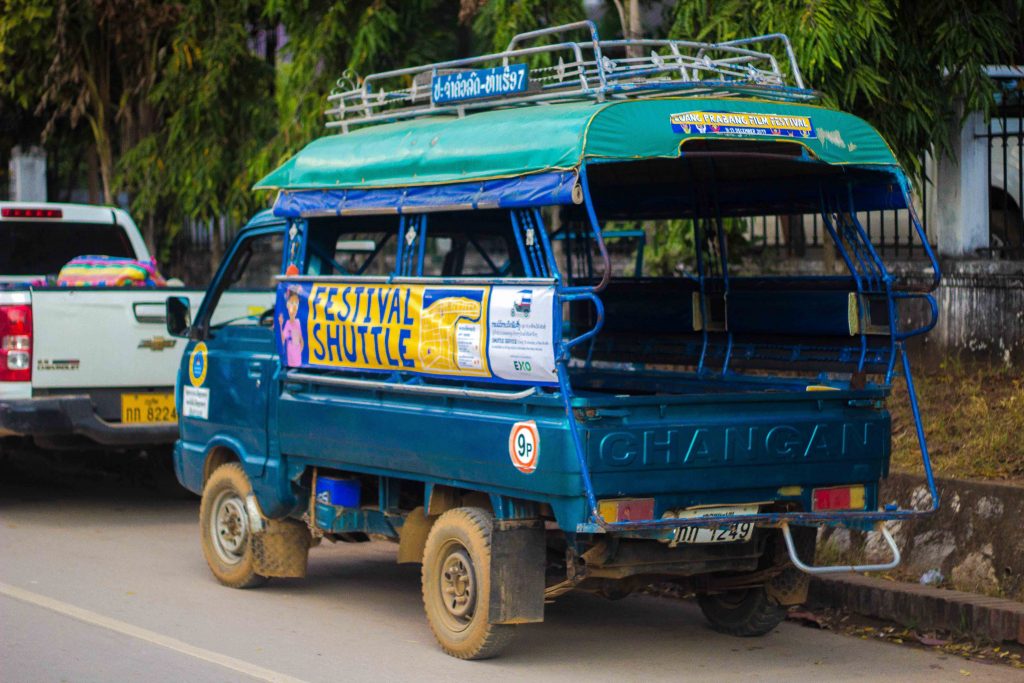 Other attendants have expressed concern that local people might feel uncomfortable coming to a luxury hotel, which would certainly explain the difference in attendance between the daytime and evening events.

Films Screened at the Festival

The movies screened at this year’s festival varied considerably, with plotlines as familiar-sounding as a story about teenaged parents forced to live on the streets and as unlikely as a tale of a Thai rock-and-roll fan who finds a time machine in the forest and travels to the past to save his country from its techno obsession. However, many of the films focused on social issues specific to Southeast Asia, such as the horrific conditions faced by refugees from Myanmar. 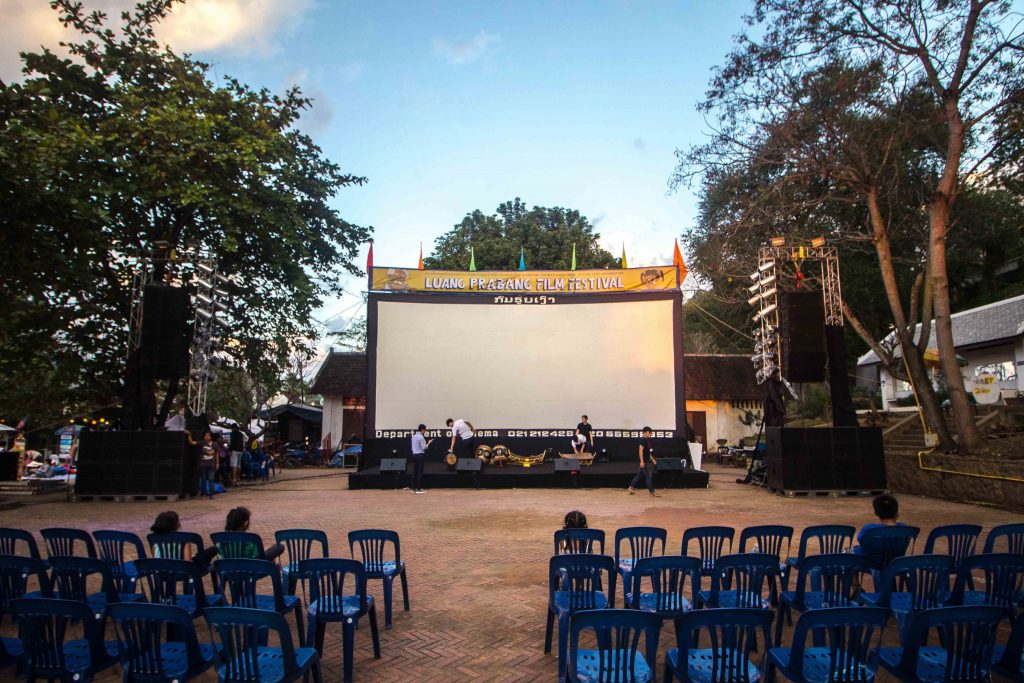 We caught three screenings during the festival, of films from three different countries: Thailand, Laos, and Cambodia, coincidentally all countries we’ve visited this year.

Though unknown to us, Bad Genius was Thailand’s highest-grossing film this year (earning over $3 million), and was in consideration for submission to the Oscars for Best Foreign Language Film. The film centers on a very bright but relatively poor girl who enters an elite private school. In order to pay her school fees, she devises a system to help her rich classmates cheat on their exams.

Most of its actors were unknown before the movie’s release, but their performances, as well as the story and cinematography, were incredibly engaging and suspenseful. To a Western audience, some of the scenes do feel a bit cheesy and overdramatic, but it really just adds to the experience.

Knowing that the Laotian film industry is in its infancy (the first film not funded by the government only came out ten years ago) and that Laos is significantly less developed than most of its neighbors, we weren’t sure what to expect from the screening of a Lao film. But even with no expectations, Khuannang was…confusing. And the sometimes nonsensical subtitles didn’t help.

For some reason, the festival described the movie as being about human trafficking, but it really wasn’t. Early on, the main character is briefly kidnapped, and then rescued. But the main plot, completely unrelated to the kidnapping, is a meandering and pretty unengaging love story, if you can call it that. Still, it was really interesting to see how Khuannang differed from the previous night’s Thai film, which largely resembled a well-funded Hollywood movie.

This movie also surprised us, but with its dark quality rather than its production value (which was considerably higher). Apparently, it would be wrong to assume that Southeast Asian films wouldn’t be as ruthless as those from Hollywood, where viewers are desensitized to death and violence on the big screen.

In Mind Cage, a psychiatrist in the Cambodian capital disagrees with a traditional healer from the countryside about how a patient should be treated. You would never guess how the story unfolds, so here’s a spoiler (and a trigger warning): the traditional healer goes on a killing spree, psychologically tortures the psychiatrist and his family, and finally, through a twist, forces the doctor to inadvertently kill his own wife.

Unable to deal with the trauma, the psychiatrist ends up catatonic in a mental hospital, and the healer gets away. As the lights went up, we were in shock – this movie was darrkkk.

There were a bunch of other interesting-looking movies we’d have loved to have seen if time had allowed, particularly the festival’s two documentaries. Blood Road (which is available for free online) follows an American mountain biker and her Vietnamese riding partners as they cycle the Ho Chi Minh Trail and reconnect with their family history along the way.

The other documentary screened, Railway Sleepers, is a nearly dialogue-less film that examines life on a Thai train as it travels 1,100 miles from the country’s southern border to Chiang Mai in the north – which sounds like a must-see for lovers of train travel like ourselves.

We never imagined how much we’d enjoy the Luang Prabang Film Festival, and we’re definitely going to be on the lookout for other festivals in our future travels. If you know of a good one, tell us in the comments!

Have you ever attended a film festival? 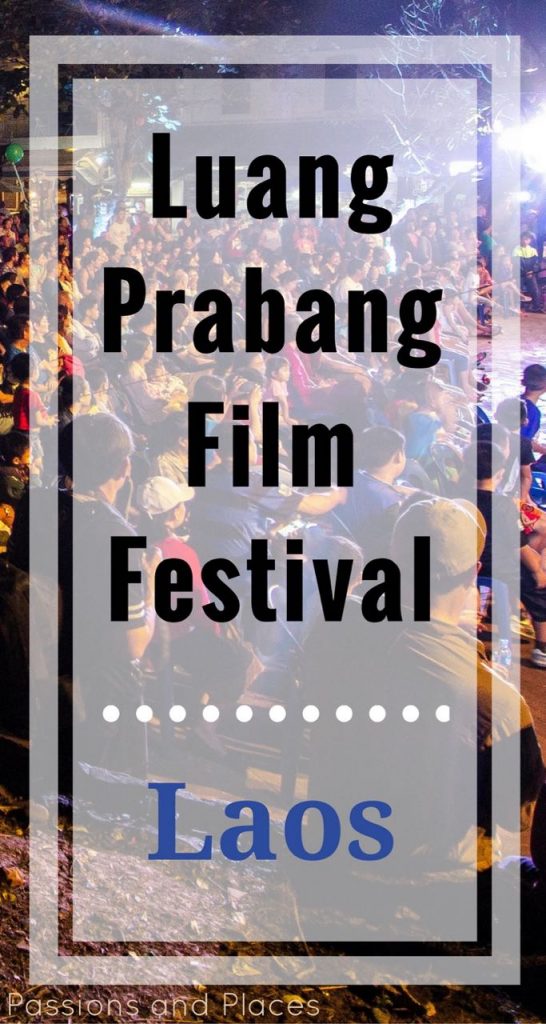 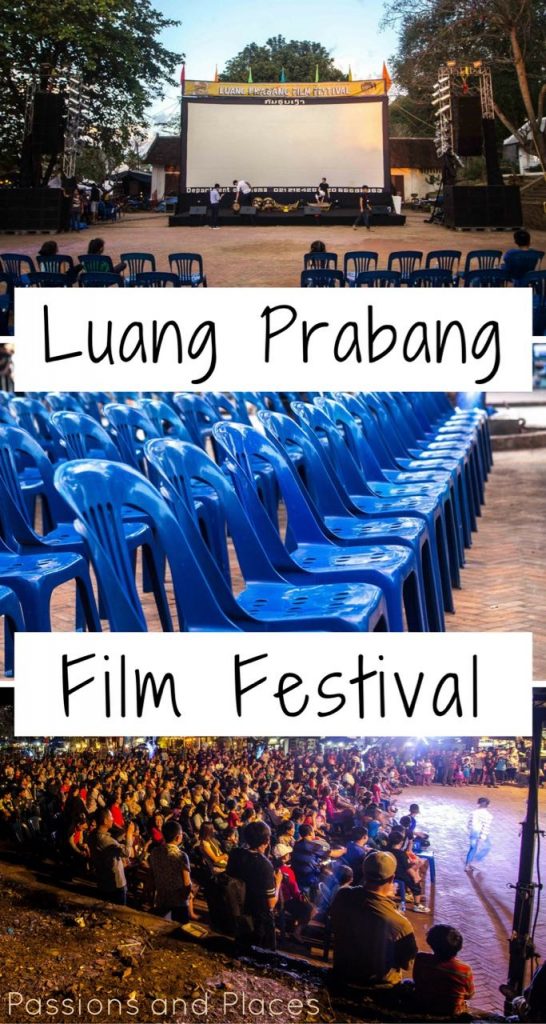