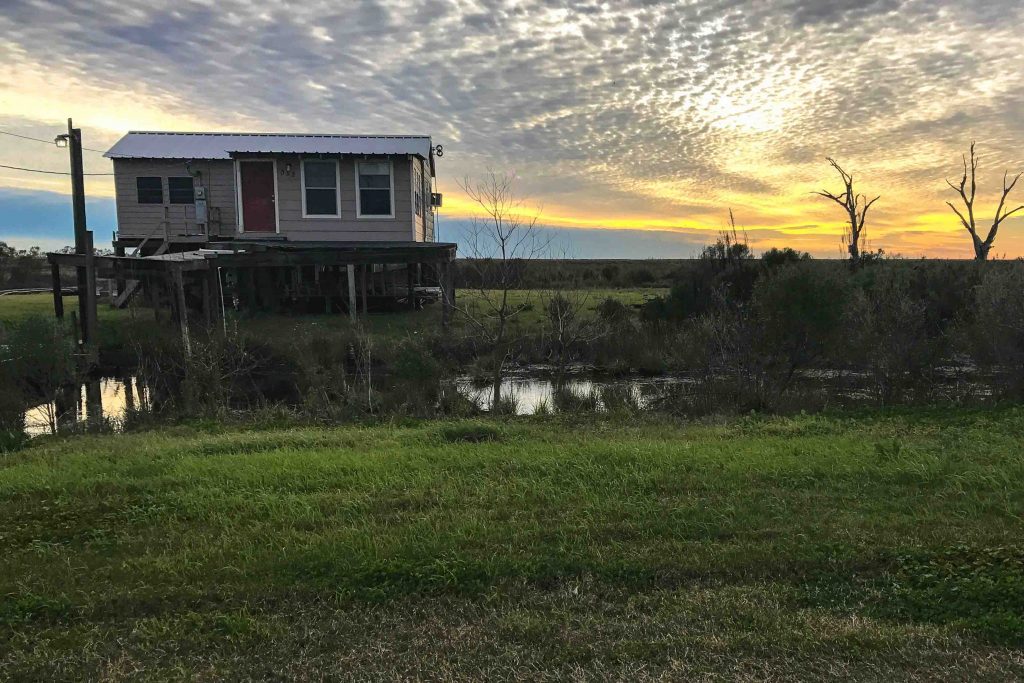 What good is a road trip if it doesn’t take you off the beaten path, to places you’d never see without your own set of wheels? Our road trip through the South started in New Orleans, where we found there’s much more to see than just Bourbon Street.

But we knew we’d also want to experience more of the state than just one famous city, and the rest of our road trip through Louisiana didn’t disappoint.

To see more of Louisiana, we headed south, first with a stop in the capital of Baton Rouge. Louisiana is home to the tallest state capitol in the U.S. – and these are the things road trips are made of, no? 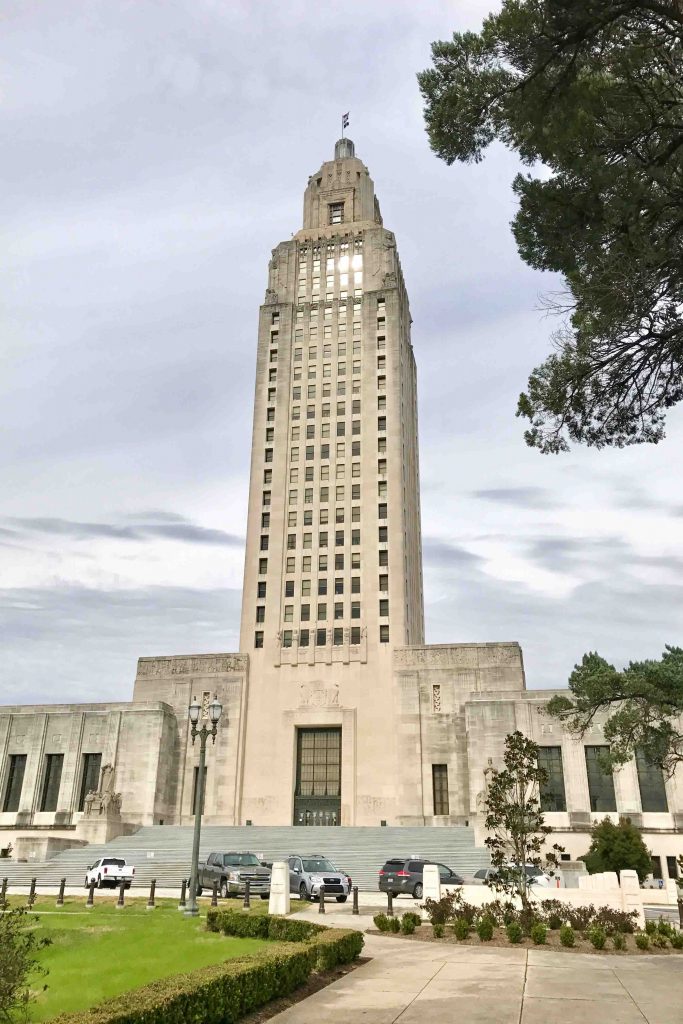 Honestly, we were expecting a little more of interest about current politics out of our visit to the capitol building. But we did see a pencil stuck in the ceiling of the Senate chambers, a piece of leftover shrapnel from a 1970 bombing. 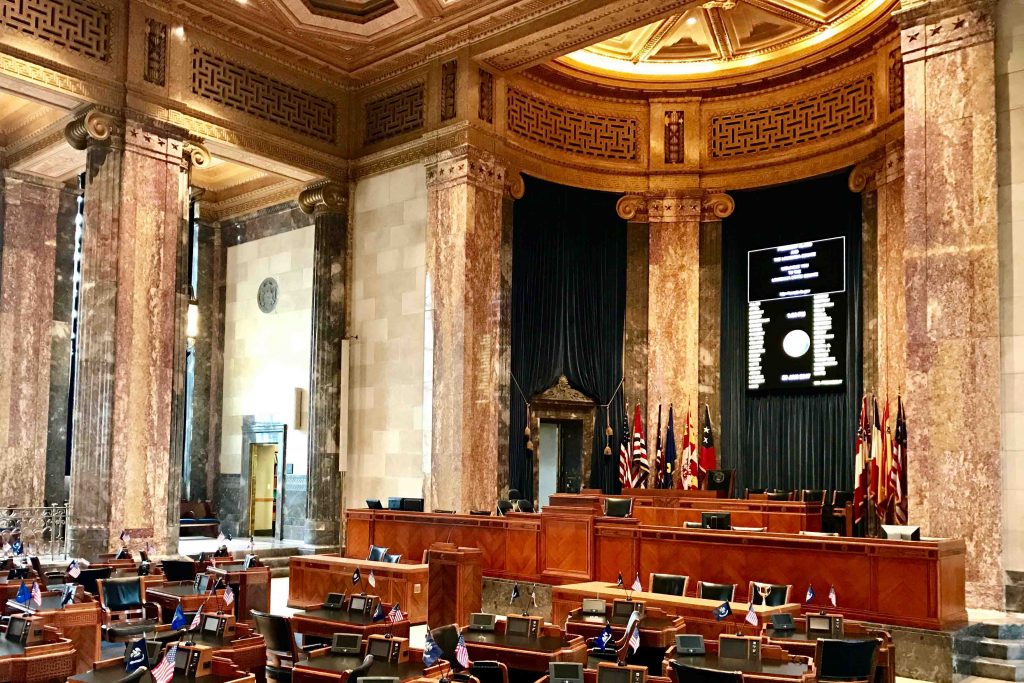 The 27th floor of the capitol building houses an observation deck with sweeping views of the city and the Mississippi River, and it’s definitely worth going up to. There’s also a clear view of a nasty oil refinery – interestingly described in the capitol’s brochure as Baton Rouge’s “prosperous petro-chemical corridor.” 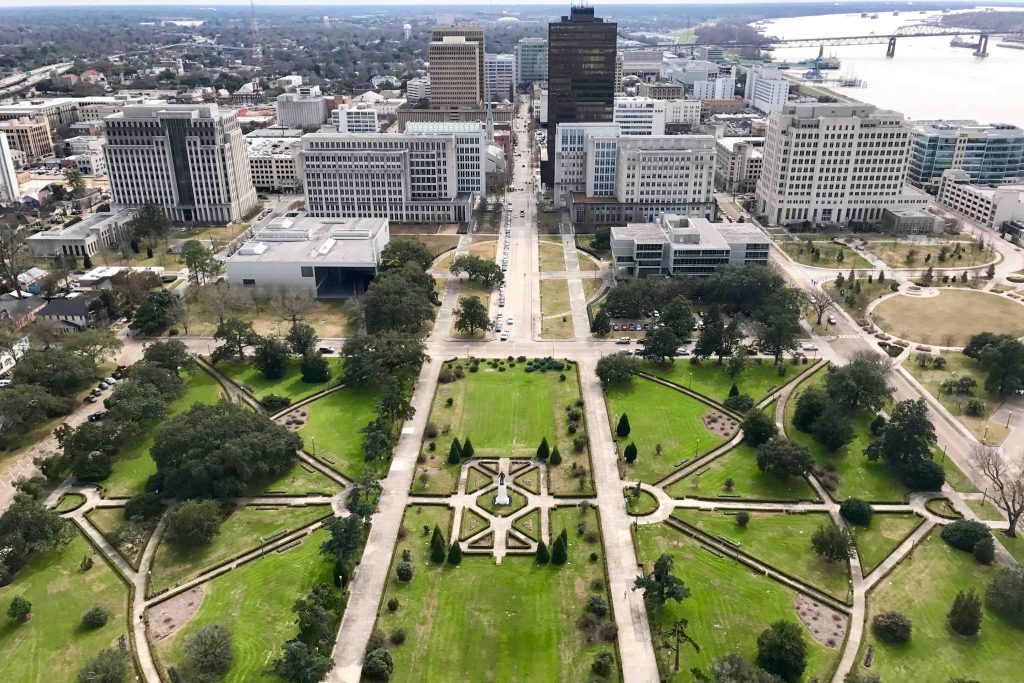 The highlight of our short time in Baton Rouge, though, was actually the old state capitol, which is now a museum. As a bonus, the building looks like a castle, and we certainly weren’t expecting the beautiful stained glass dome inside, either. 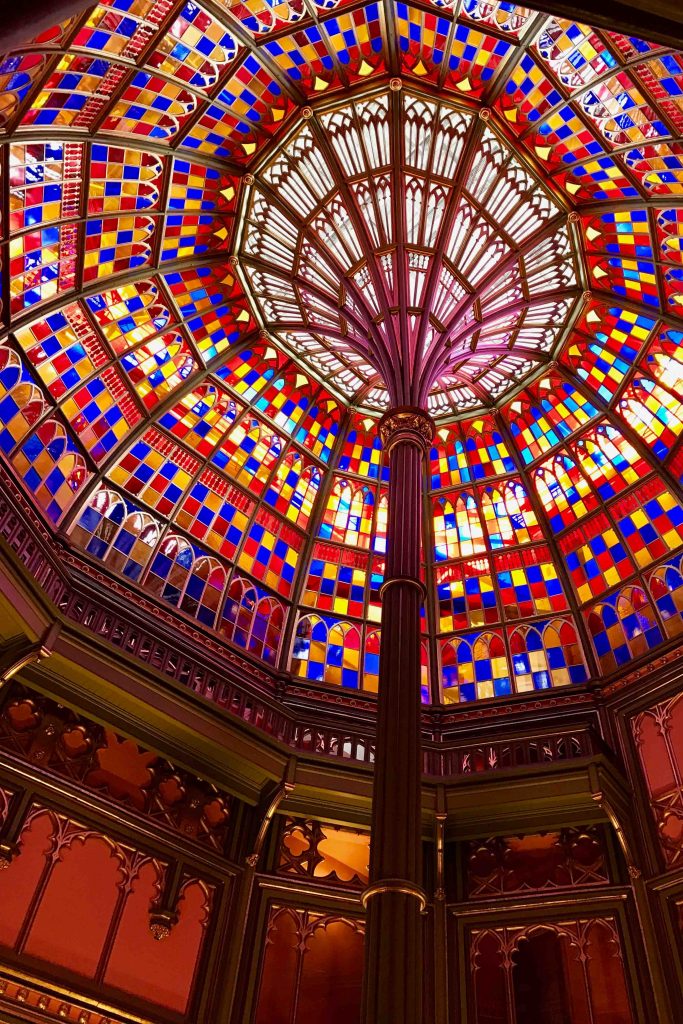 One of the more impressive exhibits in the museum highlighted the state’s past governors, detailing the political beliefs and major accomplishments of (and sometimes controversies surrounding) each one.

But most interesting was the extensive exhibit on Huey Long, a divisive populist politician who served as Louisiana’s governor and then U.S. Senator in the 1930s. And who nicknamed himself The Kingfish, because we can’t not mention that.

Long fired hundreds of state officials who opposed him, started his own newspaper to boast about his achievements and lambast his critics, used his political power for personal financial gain, and was nearly impeached for bribery, abuse of power, and other charges – but remained beloved by a segment of the population. The exhibit made a point of presenting the pros and cons equally, but the whole thing just sounded very familiar.

With just a half-day in Baton Rouge, we didn’t have time for much else, but we did make one more stop on the way out of town. Looking for a jolt of caffeine before the drive, we found it at a surprisingly hip coffee shop, Magpie Café.

So, you’ve likely visited or thought of visiting New Orleans at some point and have at least heard of Baton Rouge, but Houma? Our next stop, a town we didn’t even know how to pronounce, was farther from the beaten path.

Houma is the gateway to Louisiana’s bayou country, where the land begins to meld with the water – and frankly, that’s pretty much the only thing we knew about the town going in. Our stereotypes of the bayou conjured up images of poverty and isolation (it’s not a flattering stereotype, but it’s one that many people unfamiliar with the area have), but we wanted to see what it’s actually like.

As it turned out, Houma is pretty similar to any other mid-sized town you’d find throughout the South or even the Midwest, complete with a Wal-Mart and several big box stores and chain restaurants – though there are plenty of restaurants where you can get fried mussels and hush puppies instead, if you want more local flavor.

One of the biggest highlights of our brief stay in Houma was our Airbnb rental there, one of the best Airbnb experiences we’ve had (and that’s saying a lot, because we’ve stayed in quite a few Airbnbs and almost always loved them!).

Our hosts were amazingly open, kind, and friendly, and shared so much with us about their lives and experiences in Louisiana. As a Houma-born-and-bred freelance writer and a relationship counselor originally from California who are into travel, minimalism, and tiny houses, they did nothing to advance our stereotypes of Louisiana. But they did make us delicious homemade-from-scratch biscuits on our first morning, so maybe some of the positive stereotypes are true (biscuits really are just better in the South!).

Our first stop in Houma was the Bayou Terrebonne Waterlife Museum, a small museum with a $3 admission. Its self-guided tour explains the economic activities of the bayou: shrimping, fishing, and oil. It tells all about how these different industries have interacted with each other and affected the people of the bayou area over the past century and a half. 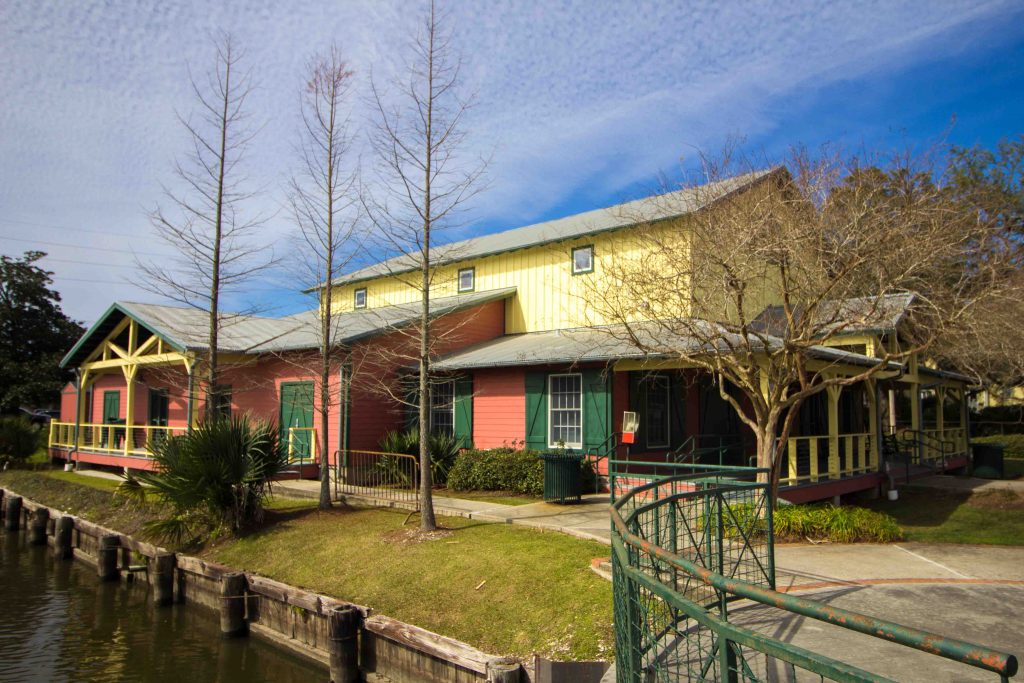 Our biggest takeaway was that the seafood industry that once thrived in this part of the state and provided a livelihood for its people is now threatened; climate change, dredging, and oil and gas pumping have resulted in massive erosion in Louisiana. Alarmingly, this part of the state is currently losing a football field’s worth of land every hour.

The museum provided a good introduction to the issues facing people in the bayou, so it made a great start to our day. After we were done there, we headed out of town (though with more time, we would’ve checked out Southdown Plantation as well). After all, we’d really come to Houma to see the bayou beyond it. 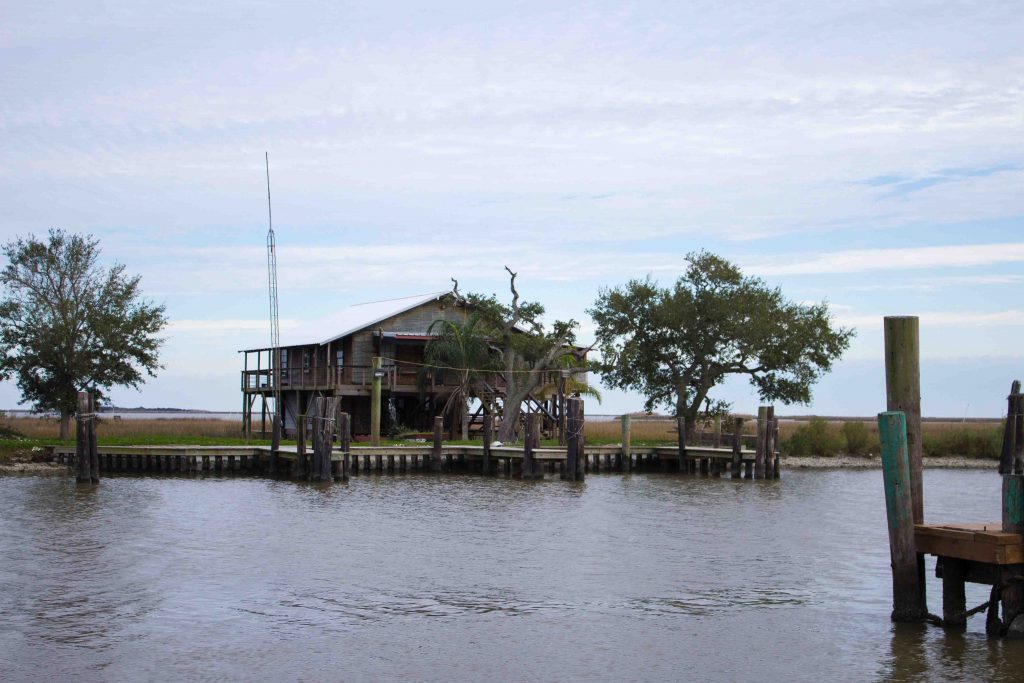 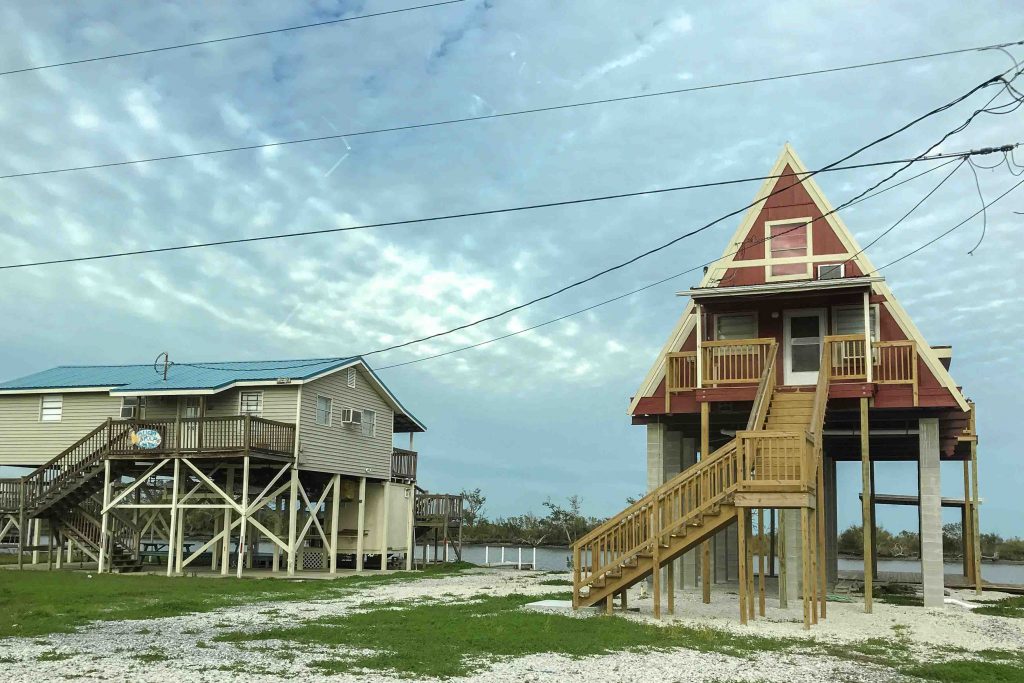 Our interest in the Louisiana bayou was piqued a few years ago after watching Beasts of the Southern Wild, which was directed by a Houma resident. Filmed in nearby Montegut and set on Isle de Jean Charles slightly farther out in the bayou, it depicts a town (“The Bathtub”) that is isolated from the world by its location beyond the levees. Far removed from the rest of Louisiana, the living standard portrayed in the film is at a level many people would be surprised to see in the U.S.

We spent the rest of the day driving around the bayou, curious to see what it was like and whether it bared some resemblance to the film. Of course, we grappled with whether we were engaging in poverty tourism, which was definitely not our intent. Due to the utter lack of visitors in the bayou, it’s a far cry from something like South Africa’s township tours, which have come to define poverty tourism.

We didn’t take photos of people or gawk at them going about their daily routine. We just smiled and waved, and chatted with the people who seemed interested in talking to a couple of outsiders. We were simply out to see a part of America that is often bypassed and forgotten. While most of us are familiar with the poverty of the Rust Belt and Appalachia, many of the issues in the bayou seem to get ignored.

Oil in the Louisiana Bayou

What we found in the bayou was an area dominated by seafood and oil, with more industrial infrastructure than we were expecting. The oil industry has brought about major changes in the area, and the importance of oil to Louisiana’s economy is a double-edged sword.

An extensive road network has been built beyond the levees to feed the support system needed for offshore drilling, and we were surprised by the number of businesses – mostly hotels and bars – located past the levees. But the influx of money has also had an impact on the politics of the state, and continued the cycle of corruption that was seen under Huey Long. 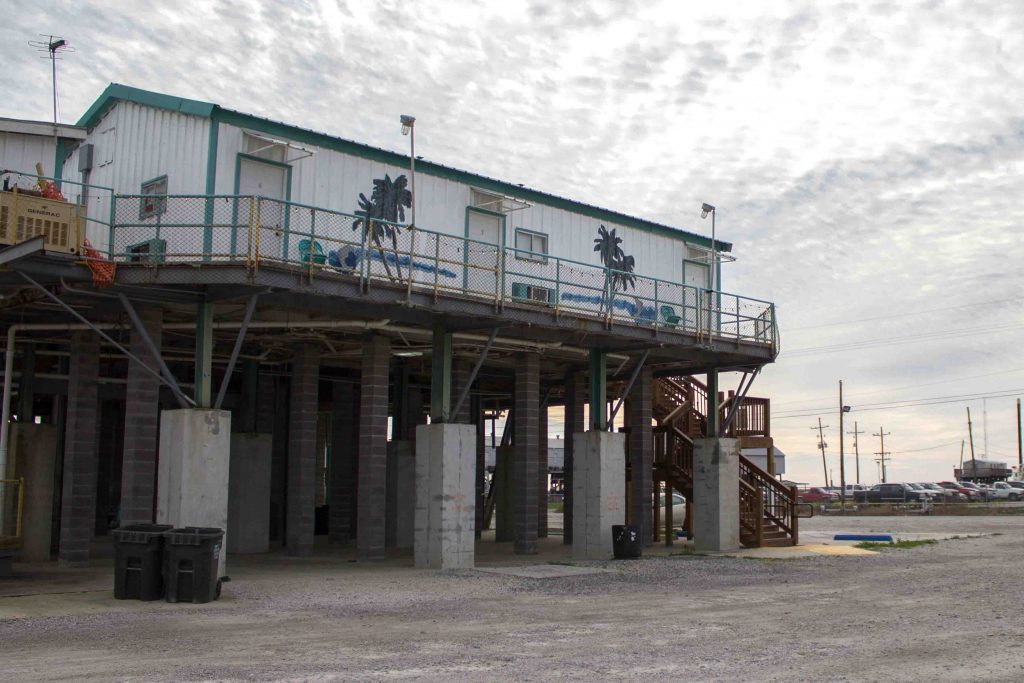 Once we reached Isle de Jean Charles, our last stop of the day and the setting of Beasts of the Southern Wild, we found little sign of oil wealth.

In the past, the island measured five miles wide and eleven miles long; today, it’s only a quarter-mile wide and two miles long, as the rest has already sunk into the ocean. It’s built around one main road that stretches its entire length, and all of the houses sit alongside it. Some of them are repurposed mobile homes, elevated on stilts for protection against the encroaching waters. 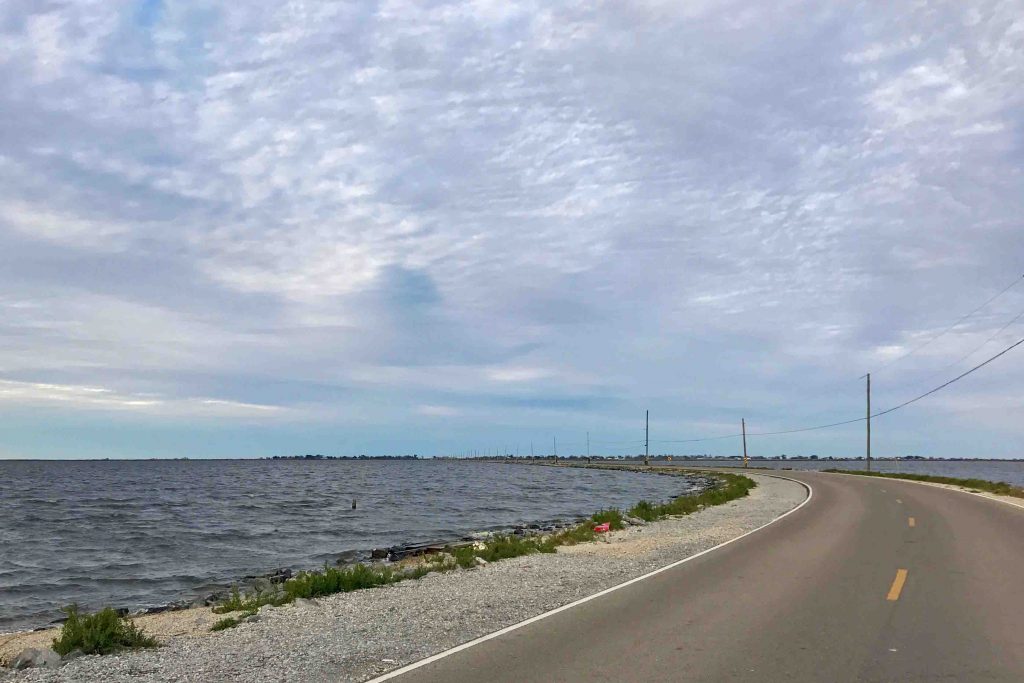 From what we saw, the area is indeed poor. But to the residents who live there, both Cajuns and members of the Biloxi-Chitimacha-Choctaw tribe, it’s home. They have pride in their community and have resisted efforts to be resettled, even as the land continues to sink into the ocean.

The signs posted throughout the island pretty clearly illustrated what the director of Beasts was talking about when he said, “There’s a group of people, and a world, that knows they’re under threat constantly, but they’re totally entrenched in living there, and they’re not going to leave.” 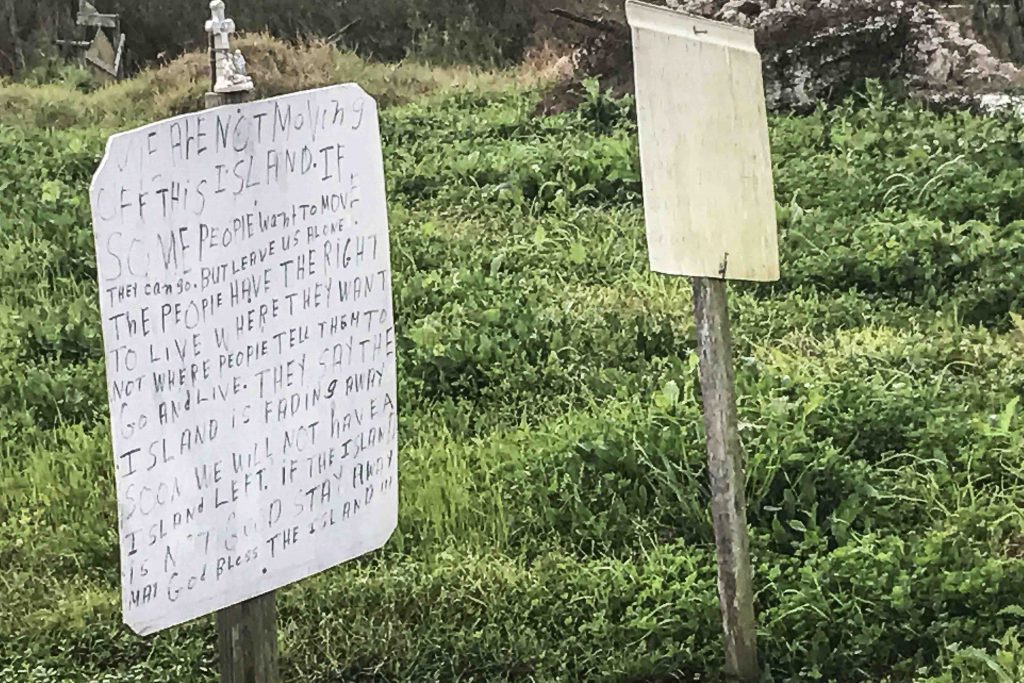 Perhaps what most people know about the bayou is that it’s the home of the Cajun people (and their food and music). Lafayette is truly the heart of Cajun country and the best place to experience it, but at 100 miles from Houma, there was no easy way to fit in into our itinerary.

Instead, we learned all about Cajun history and culture at the Wetlands Acadian Cultural Center in nearby Thibodaux. It’s an excellent free museum run by the Park Service, and hosts frequent events like a French language group and Cajun music jam sessions. 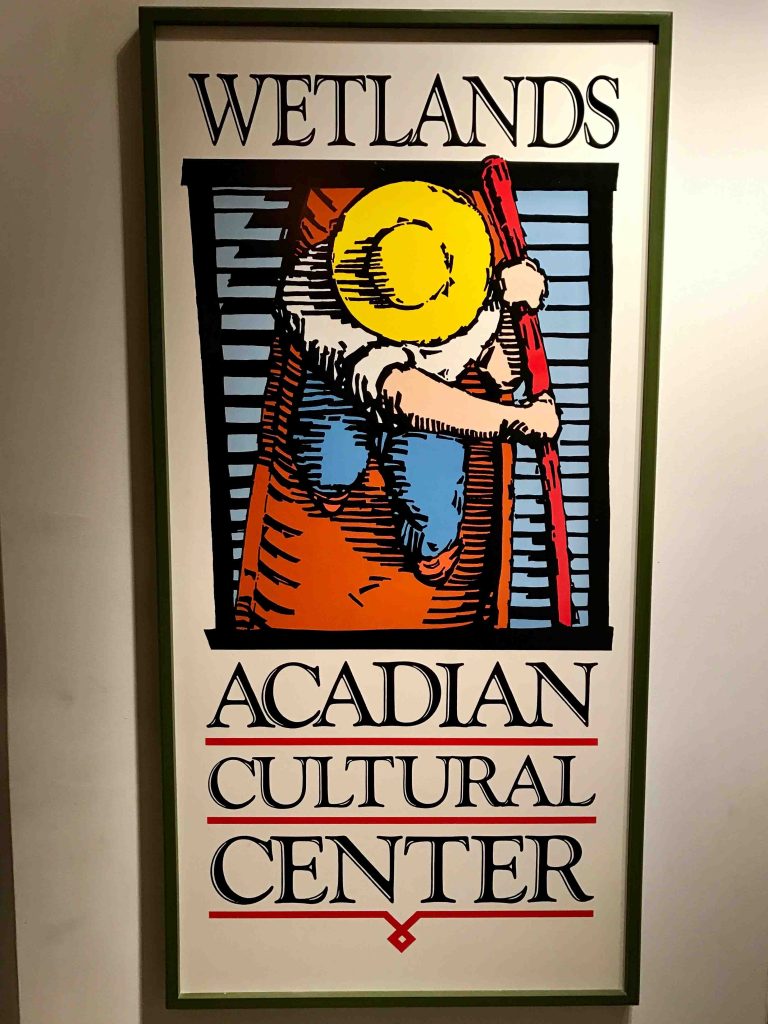 The museum chronicles Cajuns’ historical migration and their way of life in southern Louisiana. These French-speaking Americans emigrated from what are now known as Canada’s Maritime Provinces (New Brunswick, Nova Scotia, and Prince Edward Island) to Louisiana in the mid-1700s. Their collaboration with French forces in Quebec got them expelled from the area when Britain triumphed in the Seven Years War and occupied the territory.

For more than 200 years after arriving in present-day Louisiana, the Cajuns remained a marginalized community due to their language barrier and geographic isolation from the rest of the state. However, since the 1960s, Cajun culture has become much better known among the general population, leading to their assimilation into mainstream society. While this has certainly brought greater economic prosperity, it has also led to a fading of the traditional Cajun way of life.

After taking in all of that history, we were hungry, and luckily the Thibodaux Main Street Market was happening that morning. We picked up some fresh kettle corn sold by an Evangelical organization that covered their bags in gospel messages (which made a pretty good road trip snack), and a jar of pumpkin butter (not an ideal road trip snack, but it made for delicious toast later on). 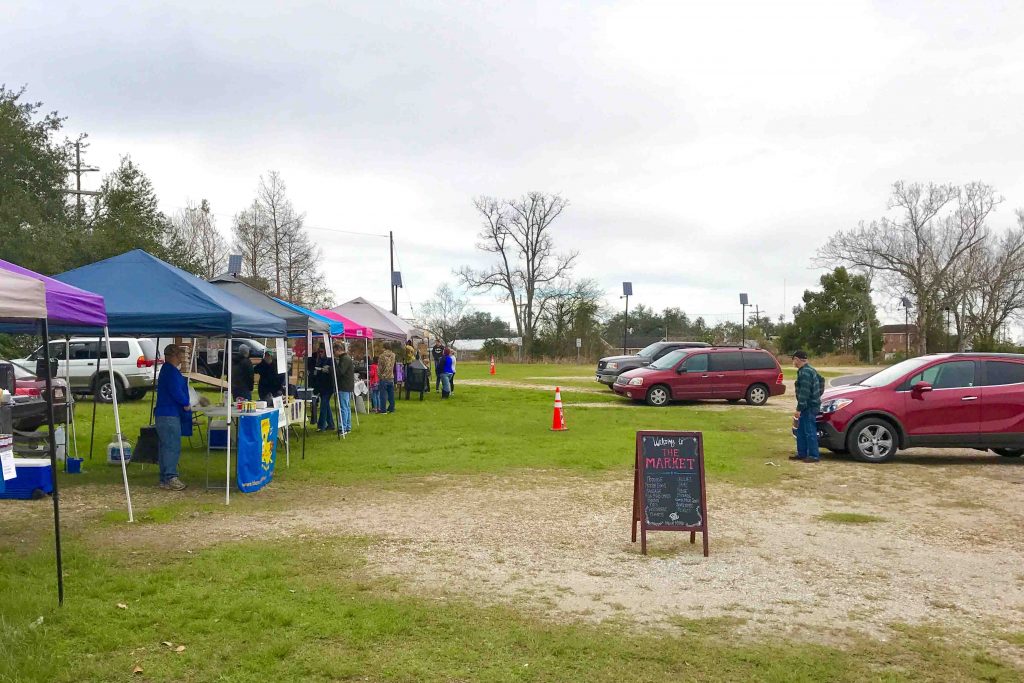 As we were in need of more serious sustenance than sugary popcorn, we stopped for lunch at the Weeping Willow Café, a surprisingly hipster-ish coffee shop. Then we were back on the road and off to Mississippi! (Sadly, our road trip through Louisiana did not take us through Kentwood, home of the Britney Spears Museum, though it would certainly have been a worthy detour.)

What would you be interested in doing on a Louisiana road trip? 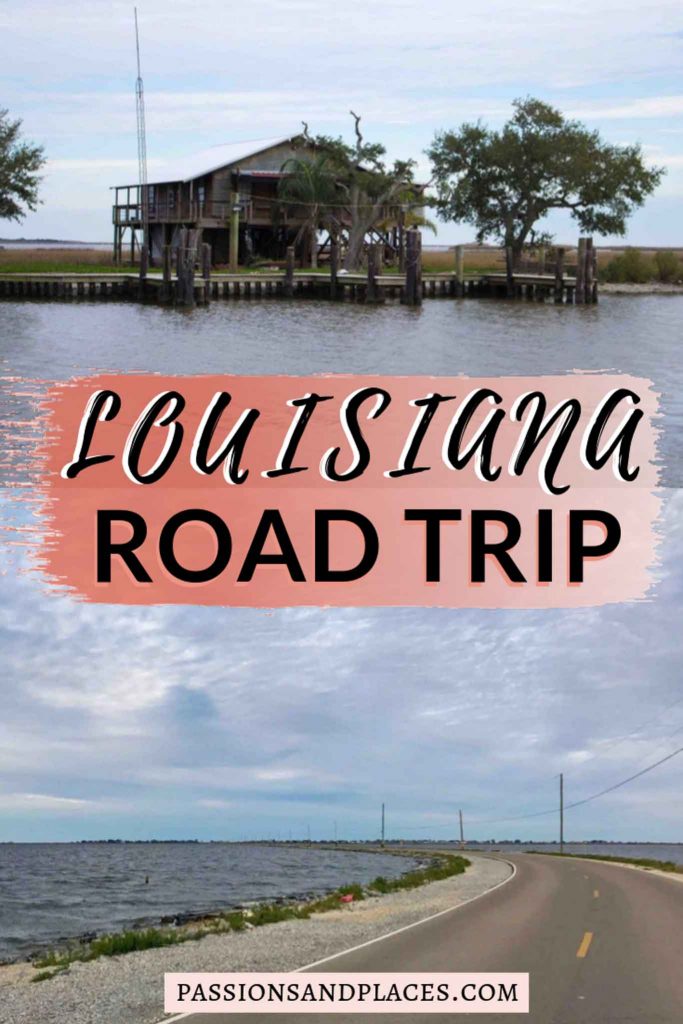 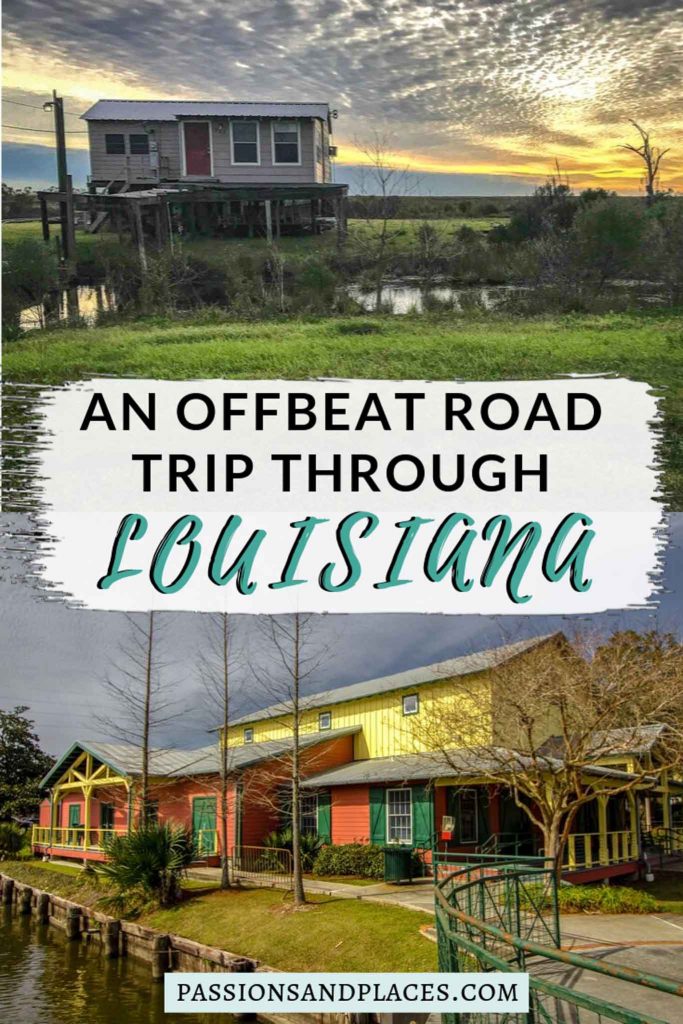 Of course, a few days of driving around hardly makes us experts on Cajun culture, Louisiana politics, or issues facing bayou country. This post is based on our own experience, but please correct us in the comments if we’ve missed or misinterpreted anything!