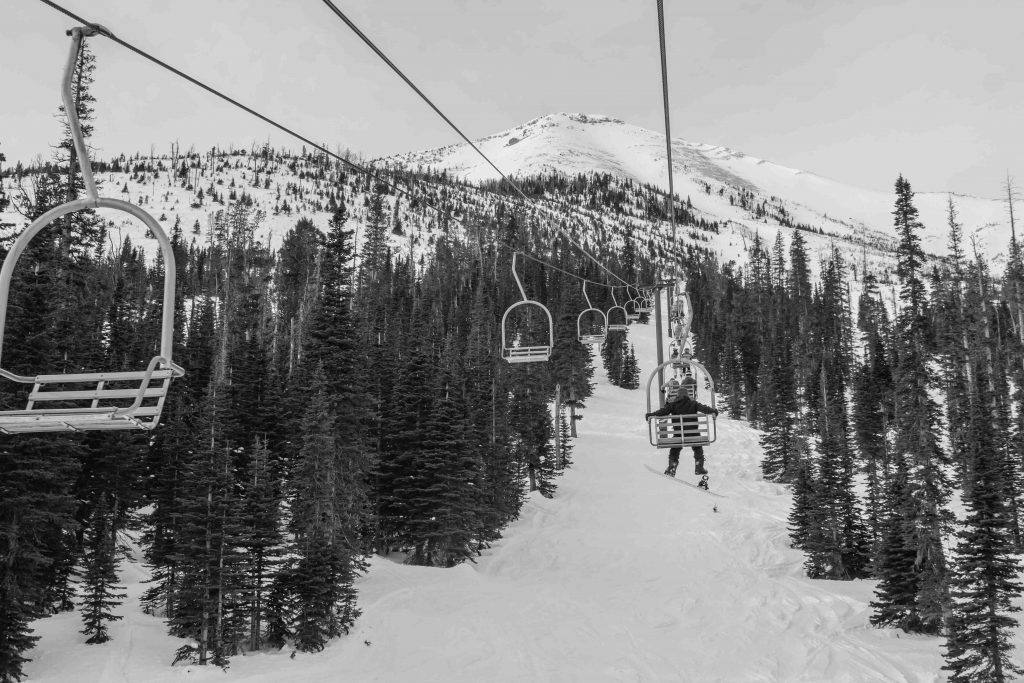 The all-inclusive ski trip was a staple of ‘80s and ‘90s movies like Better Off Dead, Ski School, and Out Cold, where the hotel rooms were lavish and stone fireplaces warmed the lobbies. They featured images of places like Aspen and Park City – resorts where a family might go on vacation once a year, easily spending a week’s salary or more in a single weekend.

Of course, our home state of Montana is no stranger to the types of luxury ski resorts that appear in movies; Big Sky Resort held the title of largest ski area in America for two years starting in 2013 (until Park City reclaimed the title).

This is not the skiing experience I know from childhood and young adulthood, though. Living in Montana, skiing was something that could be done almost every weekend, not only because of the obvious proximity, but also because the hills we went to were lighter on the amenities and easier on the wallet (I’ve never even skied at Big Sky!).

While the expensive destination ski resorts are the best known, they’re hardly the only option for a Montana ski trip. Plenty of smaller mountains, without the big lodges and the day spas and the timeshares, are wonderful places to ski or snowboard, too, and are well worth a trip if you’re on a budget.

These are mountains that don’t get the press they deserve – ones visitors should be checking out if they want to get a local experience and not spend a week’s salary for a couple days on the hill. So if a glamorous weekend at Big Sky isn’t in your budget, consider checking out one of these lesser-known ski areas in Montana instead.

Ahhh, my hometown ski hill. The mountain where I learned how to pizza, French fry, and link my first turns; I have some really fond memories of this place. Showdown is nestled in the Little Belt Mountains, an hour drive from Great Falls.

It’s relatively small at 640 acres and with just three chairlifts, but it more than makes up for its diminutive size with a lack of crowds and a hill that’s easy to navigate. There are very few horizontal traverses, which are a curse to boarders and skiers alike. It’s also a great hill for beginners, with less than a third of the trails rated as expert terrain. 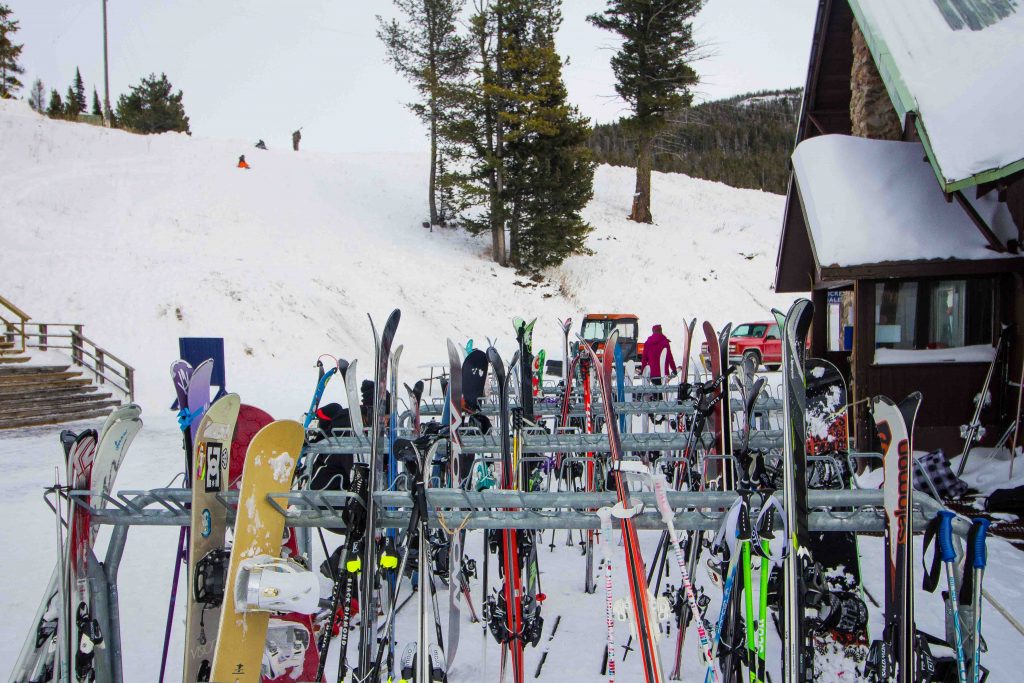 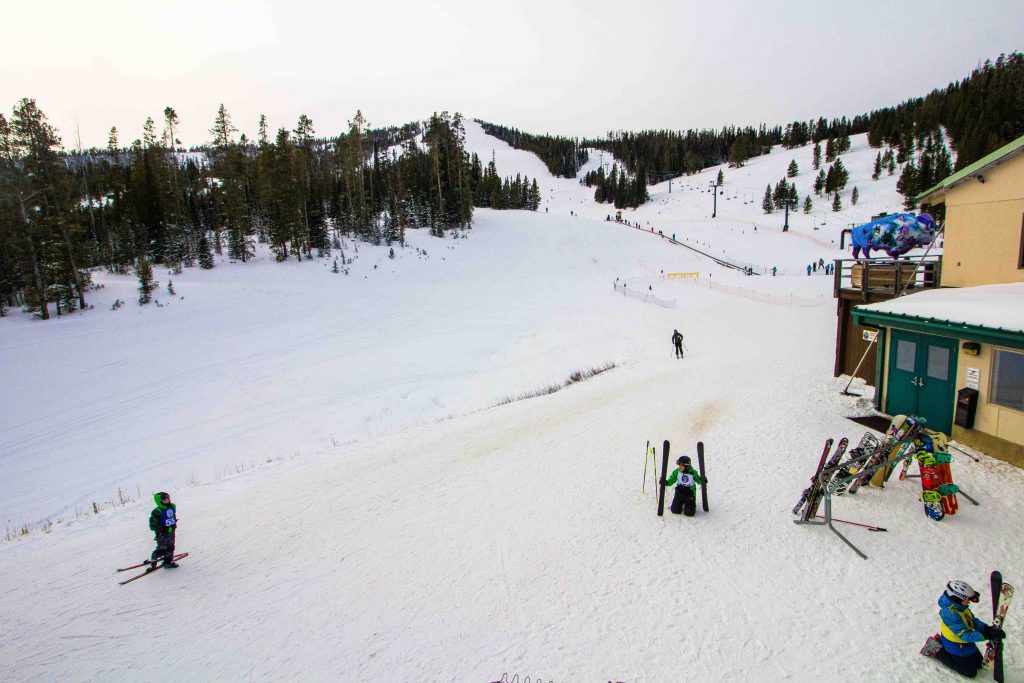 Over the past decade, Showdown’s lodge has only received minor improvements; you’ll still see retro skis bolted onto the wall (and still get mediocre cafeteria-style lunches). That’s not a bad thing, though; it’s not pretentious like some of the better-known resorts. Besides, the focus is on being up on the mountain, not chilling in the lodge. 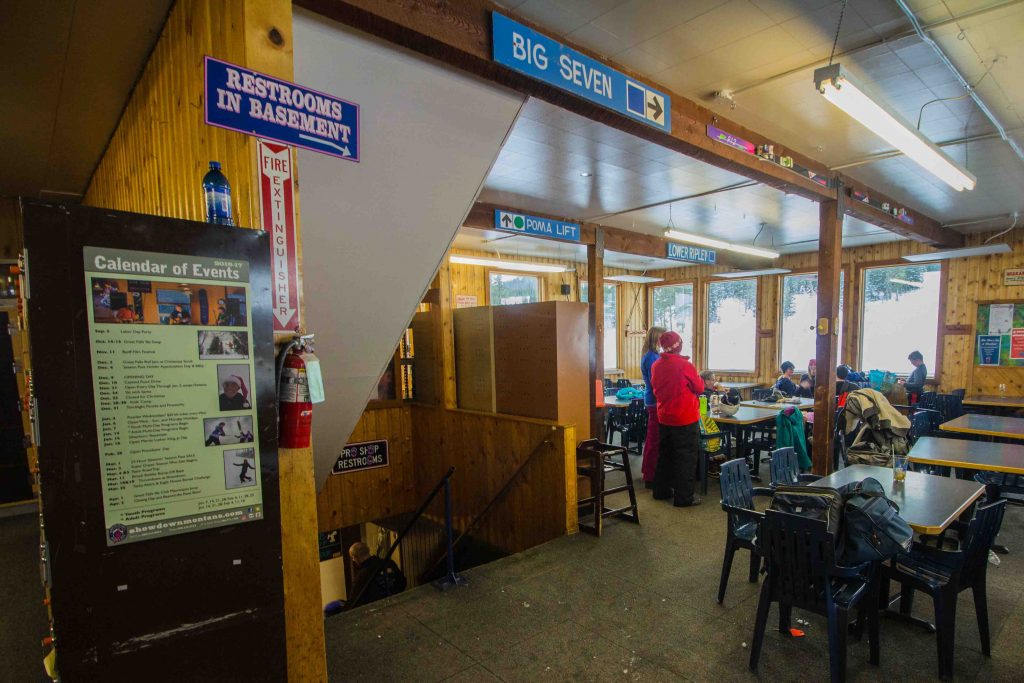 Don’t let the name fool you: Teton Pass is actually the smallest ski area on this list and the furthest from being a resort. During my childhood, it was seen as the domain of farmers – a place where you were more likely to see a skier in full Carhartt coveralls than a Patagonia jacket.

The 1.5+ hour drive from Great Falls, the nearest major town, keeps the crowds at bay. It’s well worth the drive, though, as the hill is part of the Rocky Mountain Front (and adjacent to the famed Bob Marshall Wilderness), one of the most strikingly beautiful places in Montana. 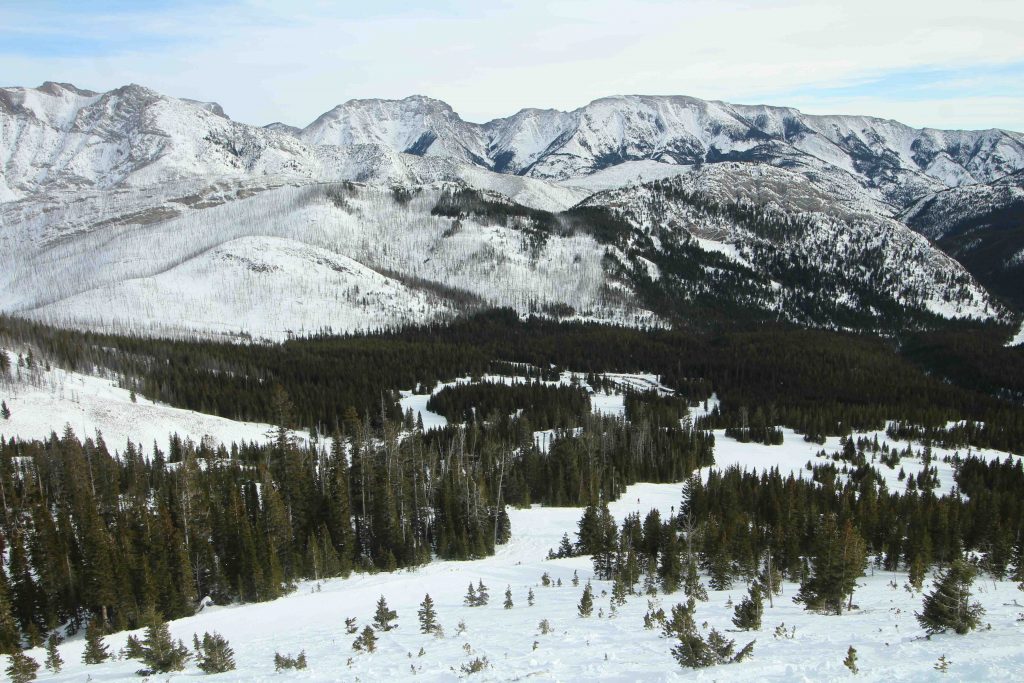 In 2010, Teton was acquired by a New Zealand businessman, who’s been steadily making improvements to both the hill and the lodge. It hasn’t lost any of its farmer charm, though, and remains a super down-to-earth place to ski.

It only has one chairlift, and despite other improvements to the hill, it’s just a metal frame with wood planks for the seat and backrest. The lodge is quite small, but it’s charming, and the food is excellent – and not ski hill-excellent, but truly restaurant-excellent.

Another thing that’s interesting about Teton Pass? You can rent the hill – the whole hill! I have no idea how much this costs, but it just might be your best shot at getting a private ski hill for a day. 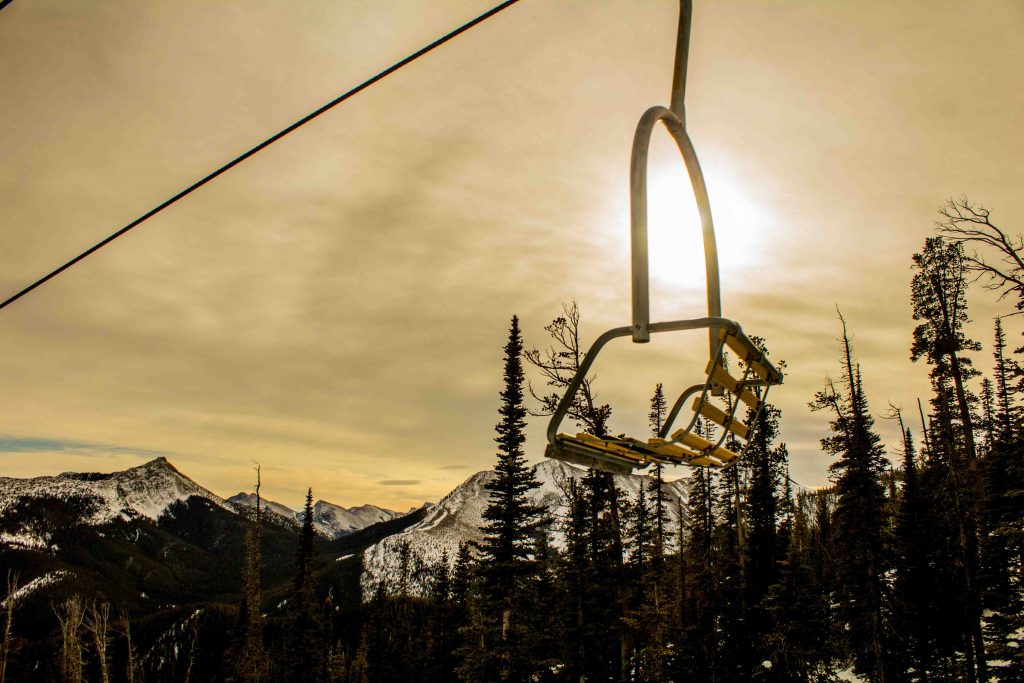 Snowbowl is a surprisingly underdeveloped ski area with only two double chair lifts, though expansion is in the works. It’s only a half-hour drive from Montana’s second-largest town, which should make it more popular, but it’s not a beginner-friendly mountain. There aren’t many green trails, and you have to follow a very specific route to use them.

It’s unfortunate that Snowbowl isn’t more accessible to beginners, because the University of Montana has nearly 13,000 students living less than 15 miles away – and many of them would certainly be interested in skiing or snowboarding.

But, Snowbowl is a great destination for advanced skiers, and even experienced intermediates, and the lack of crowds only makes it a better experience for those who can navigate the challenging terrain.

It would be remiss of me to not mention just how great the town of Missoula is, too. Once you’re done shredding the slopes, you can enjoy an arts and entertainment scene of a caliber you wouldn’t expect for an isolated mountain town in Montana. Plus, there’s an assortment of amazing restaurants in Missoula, not to mention over 10 craft breweries, a winery, a cidery, and multiple distilleries.

Montana’s first ski area to open each season and the last to close, Great Divide has one of the most extensive snowmaking operations in the state (unlike in New England, Montana ski areas only make snow to fill in patches when needed, not to cover the mountain). Snowmaking at Great Divide is necessary, though, as it gets less snow and more sunshine than any of the other hills on this list. 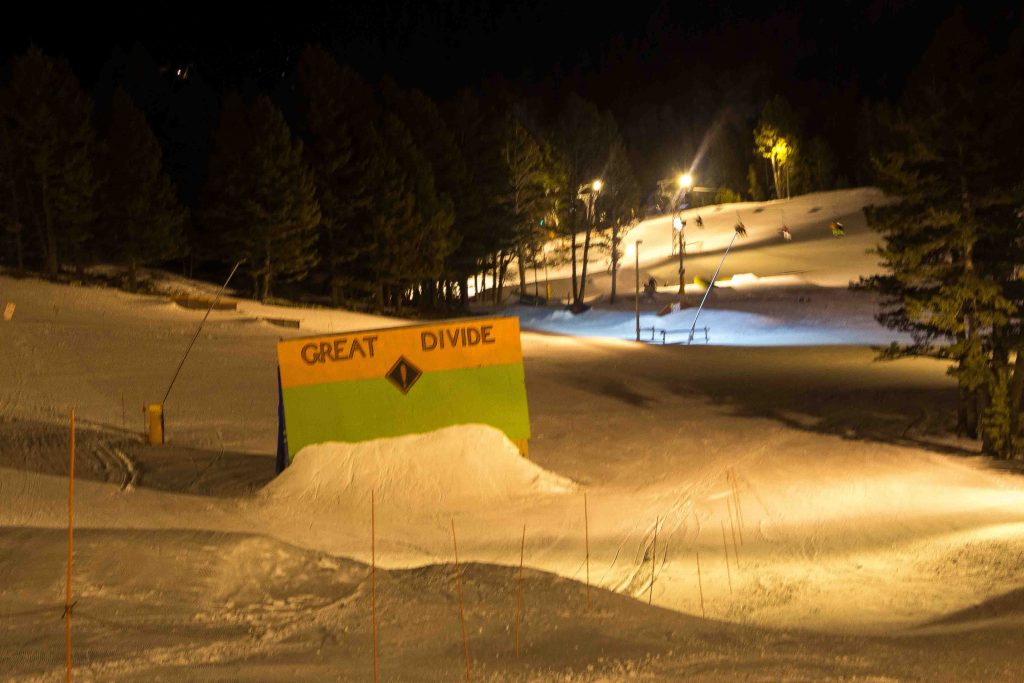 Great Divide is one of the larger ski hills in Montana, with 140 trails (the longest of which is three miles) and five double chair lifts. It’s one of the shorter mountains on this list with a base of 5,730 feet, but with the sheer number of trails, you’re not likely to get bored here.

Like the two ski areas listed above, the lodge retains a retro feel without too many extra amenities, but the sundeck outside the lodge hosts BBQs and live music whenever the weather is nice. It’s also one of Montana’s more easily accessible hills, just an easy half hour drive from Helena. 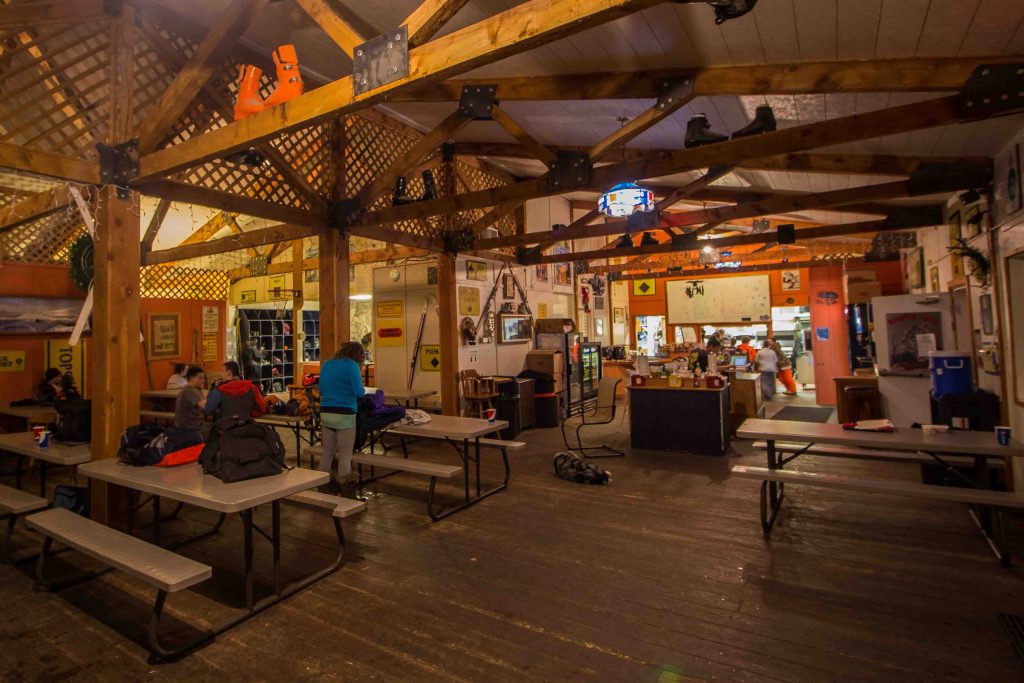 By far its most exciting feature, and the main thing Great Divide is known for locally, is Friday Night Under the Lights, when they light up the mountain and you can ski from 5:00-9:00pm for just $12. Great Divide is the only one on this list with night skiing (Whitefish Resort also has it); only three runs are lit, but you can’t beat the price – or the experience!

Or host a private night-skiing event on Thursdays or Saturdays for up to 150 people. I don’t know who does this, but it sounds pretty fun – and apparently it gets booked up fast. 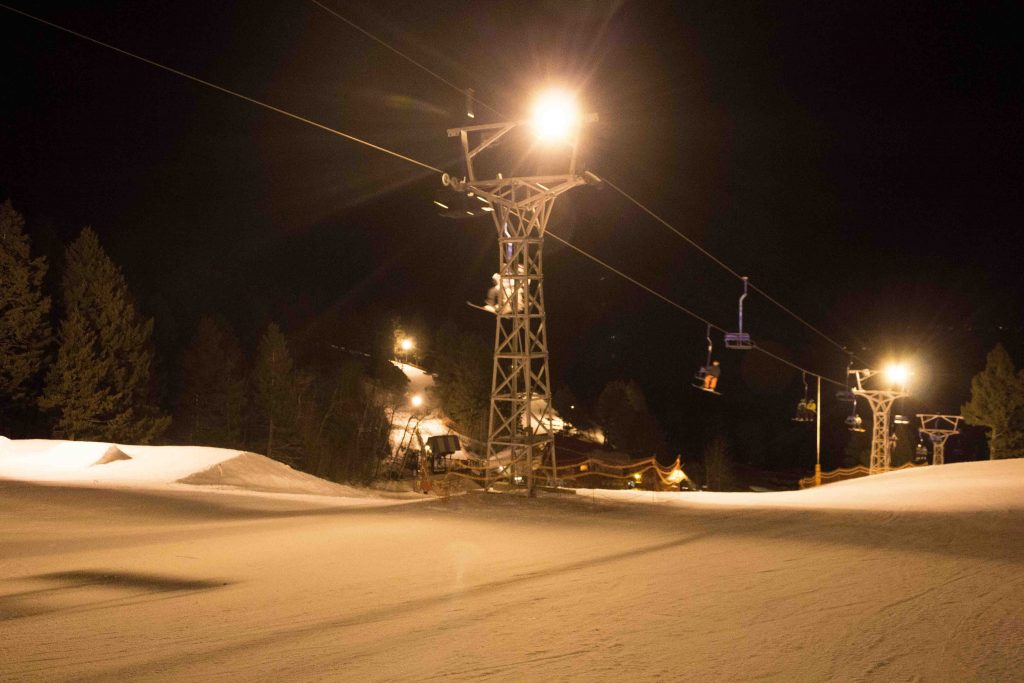 Discovery is definitely one of Montana’s gems. With no large towns nearby, just charming little spots like Anaconda and Phillipsburg, it doesn’t see too many visitors. It’s situated in what I think is one of the most beautiful places in Montana, the Anaconda-Pintler Wilderness.

Discovery also boasts some of the steepest lift-served terrain in the state, with a number of true double black diamonds (sorry, New England, those are not real double blacks…). Plus, much like Showdown, it lacks horizontal traverses between lifts and is easy to navigate.

The chair lifts may look a bit old, but it gives the mountain some character not seen at more developed resorts, and it helps keep the costs down, too ($52 lift tickets).

I might be biased, but Bridger Bowl is definitely my favorite ski area…anywhere. I went to college at the nearby Montana State University in Bozeman, which some students definitely choose for its proximity to the ski hill. And they arrange their schedule accordingly: class in the morning, skiing in the afternoon – five days a week. 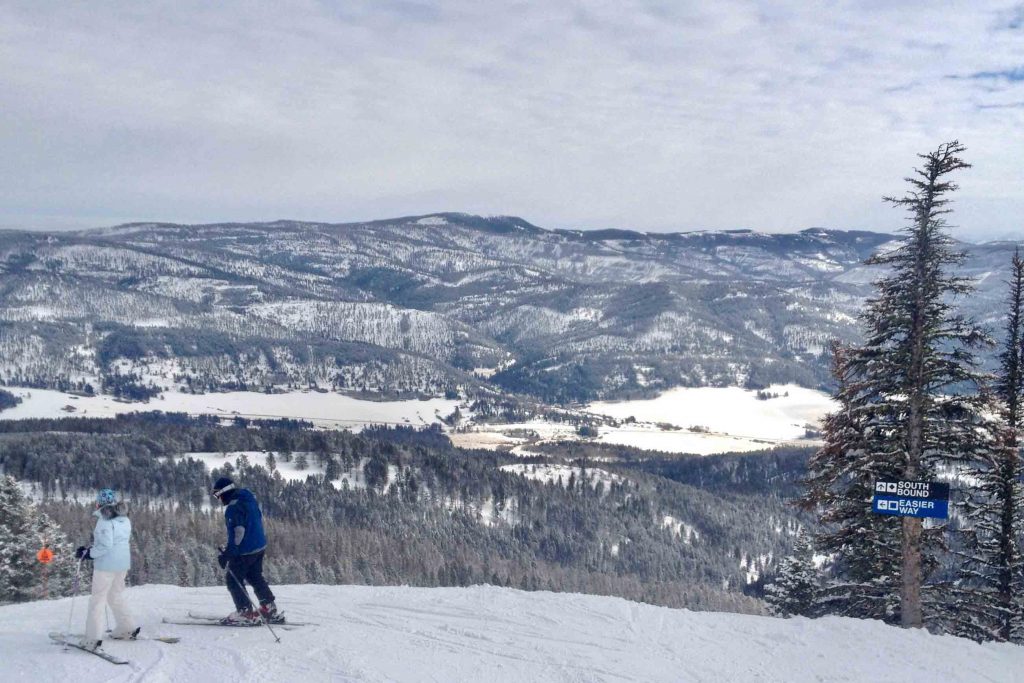 Compared to the other ski areas on this list, Bridger is big and pretty developed. It has eight chair lifts (including a quad), many long runs (the longest being three miles), several double-black diamond runs, and “The Ridge,” a renowned section of expert-only terrain consisting of steep chutes and rock cliffs that run across the top of the mountain.

Bridger’s also known for the quality of its “cold smoke” snow – the fluffiest, driest powder and the very best for skiing. It’s the opposite of the ice and slush often found on the East Coast. The hill also has three lodges, including one midway up the mountain for when you just can’t make it all the way down the run for your beer and chili.

Bridger straddles the line between being a “locals-only” hill and a destination resort. Only the lack of on-hill accommodations puts it in the local category – and the price tag (well under half the cost of Big Sky). Plus, with the number of poor college students skiing there, it’s retained the rustic charm of a much less developed hill. It’s also the only ski area in Montana that’s run as a non-profit cooperative.

Not sure if it’s going to be a great powder day at Bridger? Look up at the Baxter Hotel in downtown Bozeman, which has a large blue beacon that flashes whenever the mountain gets at least two inches of snow. 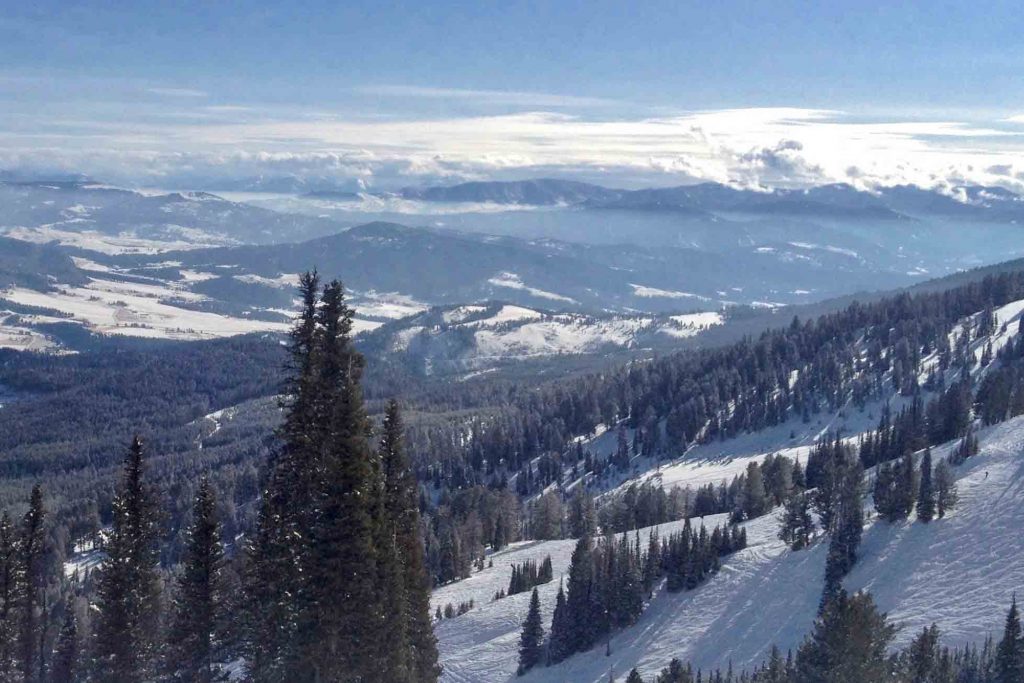 These six Montana ski resorts are some of my favorites and some of the most popular among locals, but the state has plenty more:`

Blacktail Mountain Ski Area – Small but well-developed ski hill overlooking the impressive Flathead Lake. Funny quirk: the lodge is at the top of the hill.

Lookout Pass Ski Area – Lowest-elevation ski area in the state, with a summit of 5,560 feet, straddling the Montana-Idaho border right off I-90 (fine, it’s technically considered an Idaho ski hill).

Lost Trail Powder Mountain – A hill that doesn’t get too much traffic, but has an impressive five lifts and 900 acres of terrain. Located on the Idaho border, two hours from Butte or Missoula.

Maverick Mountain Ski Area – Used primarily by residents of Dillon, and open from Thursday to Sunday with $39 lift tickets. 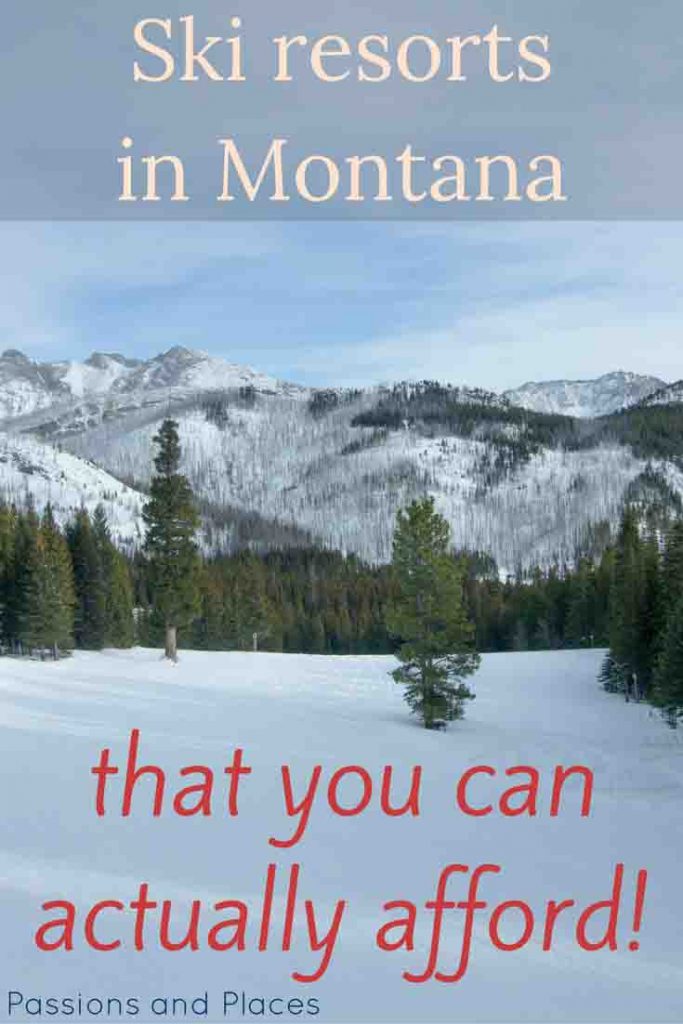 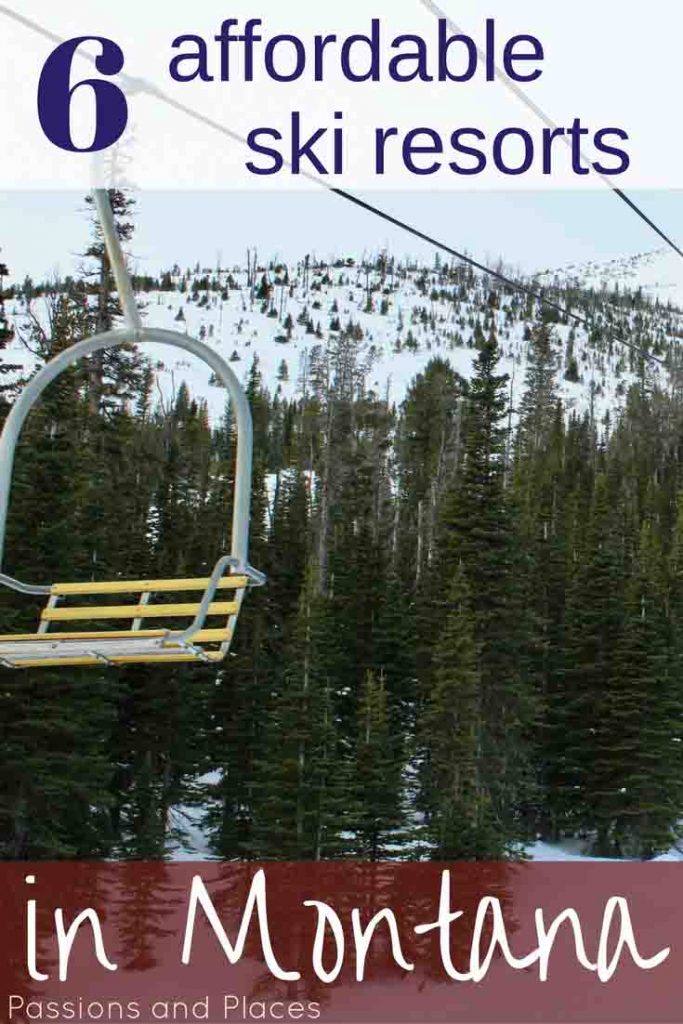