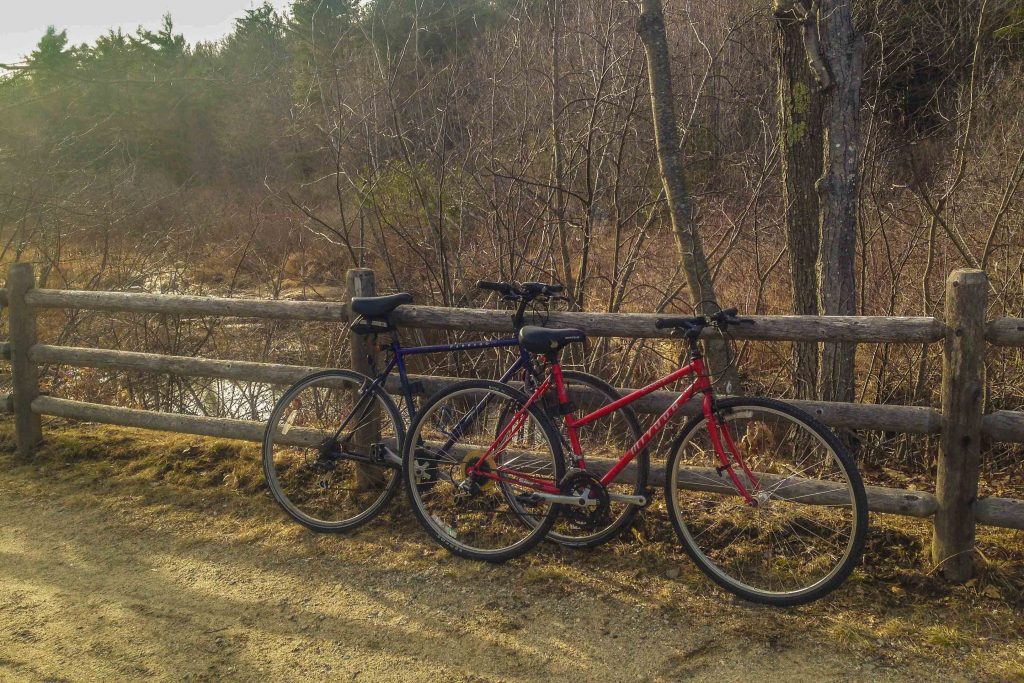 Just over a century ago, New England was crisscrossed by dozens of railway lines, competing against one another to transport people and goods between the area’s port cities and its interior. Trains were the primary mode of transportation at the time, but they declined in importance with the development of the automobile and construction of paved roads. The lines were eventually closed, and the tracks were left idle.

Thankfully, passionate outdoors groups have taken over much of the land formerly owned by the railroads and turned these vacant pathways into excellent trails for hikers, runners, and cyclists to enjoy. Old trains often passed through some pretty interesting and historic places, and now you can follow in their formerly soot-choked footsteps.

Plus, since they follow the grade of the railways, rail trails usually have little change in elevation, so you can enjoy pedaling them even if you’re not in great shape or an expert cyclist.

We’ve loved biking in New England, so we wanted to share some of our favorite routes. Each of these five bike paths near Boston are easily accessible from the city, and all but one is reachable on public transportation. And if you don’t own a bike, four of the five trails have a nearby rental shop.

Back in the 1800s, the Blackstone River was at the heart of the New England’s industry. From Worchester to Providence, textile mills dotted its shores, using the river’s flow to power their machines. Sadly, it was also where all the dyes and heavy metals from the mills were deposited, leading to substantial pollution of the waterway and of Narragansett Bay in Providence.

Fortunately, Rhode Island and Massachusetts have both invested significantly in cleaning up the riverbed and building trails alongside it.

The ten miles of trail from Woonsocket to Pawtucket passes through a mixture of verdant parklands, peacefully flowing waters, and relics of the river’s industrial past. On much of the path, you don’t even realize there’s a road only a few hundred feet away. The peace is broken occasionally on the northern half of the trail, where the path parallels an active rail line – though a few toots from the train shouldn’t ruin your day.

This is an especially nice trail to ride in the fall, right as the leaves are changing. Riding along the canal under a canopy of copper and gold showcases some of the best scenery inland Rhode Island has to offer. It’s a perfect example of how a formerly industrialized area can be returned to its beautiful state of nature.

Transportation: Take the Providence/Stoughton purple line to the South Attleboro stop (50 min. from Boston, $10.50 one-way). Warm up for your bike ride by cycling the three miles to the Pawtucket end of the trailhead.

Rental: Sadly, there’s nowhere to conveniently rent bikes near this trail; you’ll need to bring your own.

Unlike most of the other trails mentioned here, this one wasn’t built purely for recreation. The Minuteman connects the towns of Bedford, Lexington, and Arlington with the Alewife MBTA station in Cambridge, allowing suburbanites to commute into the city without needing a car.

This means it can get a bit more crowded than your average rail trail, but its location in Cambridge and proximity to the MBTA makes it one of the most convenient cycling options for visitors to Boston.

Much of the path parallels the route Paul Revere rode as he announced the arrival of the British in 1775. About half way along the trail is the town of Lexington, home of the Battle Green, where the first deaths of the Revolutionary War occurred, and the historic Buckman Tavern, where Minutemen awaited the attacking British. You can pedal, or walk, the town’s main street in just a few minutes; the interesting little shops (and Rancatore’s Ice Cream) make it worth taking a break there.

From Lexington on to Bedford, the trail feels farther removed from the urban landscape, and you begin to feel that you’ve truly left the city (though you do cross over bustling I-95 towards the end of the ride).

If you decide 20 miles isn’t enough cycling for the day, you can switch trails at Depot Park in Bedford and follow the Reformatory Branch Line Trail for four more miles over to Concord. (The path turns to dirt in Bedford, so road bikes should stay away.) From there, it’s a short 2-mile ride down Route 126 to Walden Pond, following in the footsteps of its most famous resident, Henry David Thoreau. 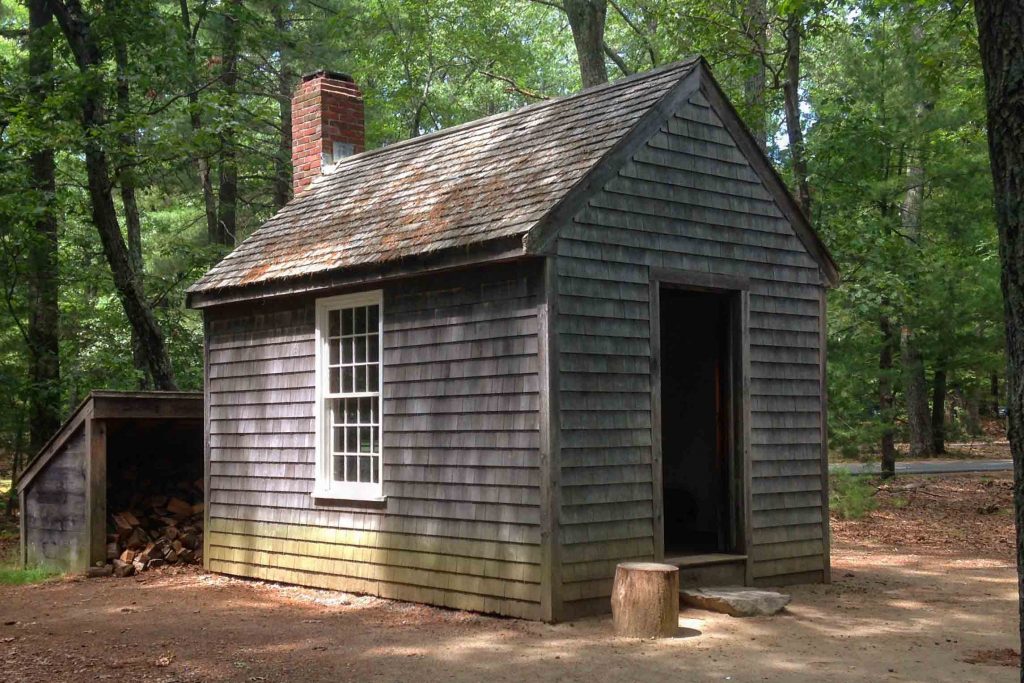 Transportation: Take the red line to the Alewife stop in Cambridge. If you cycle the Reformatory Branch Trail out to Concord, you can also take the Fitchburg purple line from there back to Porter Square in Cambridge or downtown Boston (45 min., $9.25 one-way).

Rental: Pick up a rental from Urban Adventours for $45 per day.

There’s really nothing better than a bike ride on Cape Cod in the summer. This trail from Falmouth to Woods Hole is a straight and mostly level path through the Cape’s farm country. It takes you through the woods, past salt marshes, and finally along the sandy beaches the area is so famous for.

I love the scenery in the northern section, particularly the wetlands and cranberry bogs – if you come in the fall, you’ll get to see flooded cranberry beds with their berries floating to the top.

The last two miles before Woods Hole are the most impressive of the whole trail. The landscape opens wide to the classic Cape Cod coastline – windswept beaches and steeply pitched roofs on clapboard houses, with white sailboats sprinkled out to the horizon.

If the weather isn’t cooperating, it’s also the most challenging section of the ride, as you’re completely exposed to the elements. But on a calm day, it’s an excellent place to put your bike down for a few minutes and just watch the waves roll in.

Upon reaching Woods Hole, there’s not too much to do. But Quick’s Hole Tavern and Pie in the Sky Bakery both have good food, and there’s an opportunity for people watching as the ferry from Martha’s Vineyard comes in.

Transportation: Unfortunately, this trail can only be reached by car.

Rental: Pick up a bike at BikeZone for $20 for the day; they’re located a hundred feet from the trailhead in North Falmouth.

If it isn’t clear from our last couple posts, we love Vermont, especially the town of Burlington. It’s got a plethora of outdoors activities, and if you’re visiting in the summer, the Island Line Trail is an essential trip. It’s easily among the best bike paths in New England, and it’s even been ranked one of the most scenic rail trails in the country.

The trail starts in Oakledge Park in Burlington’s south end, an excellent place to take in the views of Lake Champlain and explore the community treehouse (yes, there’s a community treehouse, Burlington is that awesome). From Oakledge, the path snakes along the lake, passing through part of Burlington’s warehouse district before reaching Waterfront Park, just west of downtown.

If you need a break from the heat of summer, there’s a popular “creemee” shop right across the street from the ECHO Science Center – get the maple, you’re in Vermont.

From the park, the trail follows the lake’s shoreline for another 5.5 miles, with a few side trails along the way leading to campgrounds and sandy beaches on the water. Past the town of Colchester, you’ll reach the true gem of the trail – the spectacular section known as the Causeway. 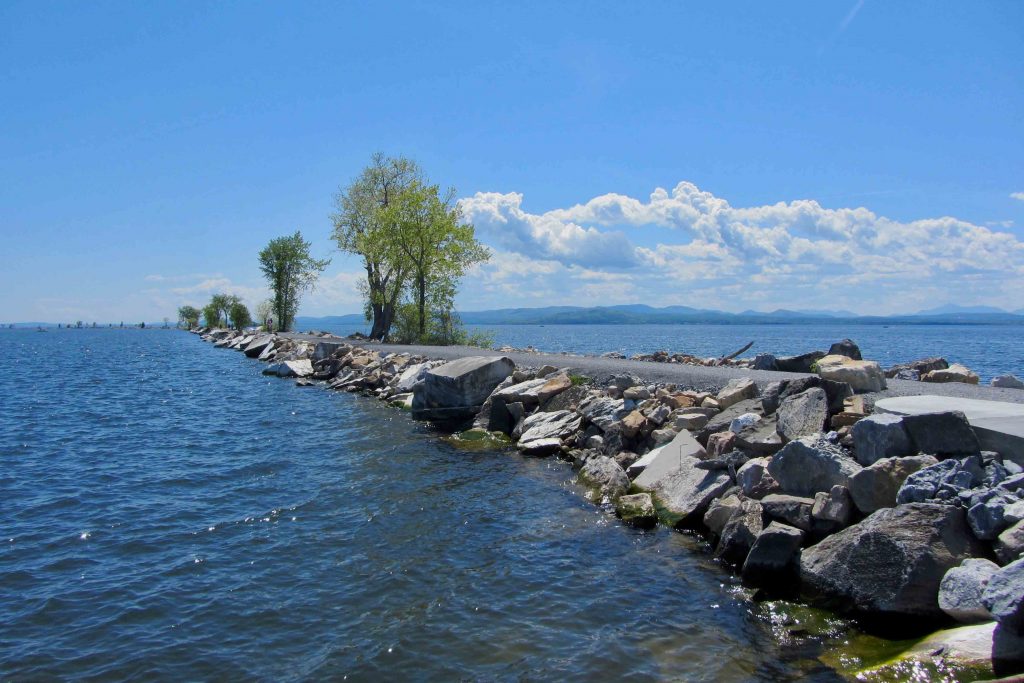 It was here that Rutland Railroad constructed a rail bed straight through Lake Champlain. Now that the tracks have been removed, a beautiful gravel trail extends for three glorious miles through one of America’s largest freshwater lakes, connecting mainland Burlington to the island of Grand Isle.

You can only complete the full trail between May and October, as there’s a 200-foot gap in the Causeway to allow boats to cross the lake. During the summer, a ferry operated by the non-profit Local Motion shuttles cyclists across the gap (you’ll need $8 cash for the round-trip ride).

The trail technically ends less than a mile after the end of the Causeway, but you can always pedal around the picturesque roads on Grand Isle. Better yet, head to Snow Farm Winery, about 2.5 miles from the end of the trail, for a wine tasting and some snacks.

Transportation: Burlington is too far away (almost 4 hours) to be a comfortable day trip from Boston, but you can certainly make a great weekend out of it. Megabus and Greyhound both run from Boston to Burlington (about $30 one-way).

Rental: Rent a bike for $24 for 4 hours or $38 for the whole day from Local Motion (the same organization that runs the ferry). They’ll also fill up your water bottle and pump your tires for free, even if you’re not renting.

In the distant future, when our political leaders decide to invest a lot more money in trail systems and infrastructure, Maine’s Eastern Trail will be part of the East Coast Greenway – a paved cycling trail that will run from the Canadian border in northern Maine all the way down to the southern reaches of Key West, Florida.

At this time, the completed sections are scattered up and down the East Coast, and the Eastern Trail in Maine is one of them. The trail is currently split into two pedestrian-friendly segments, separated by an on-road section.

The first segment starts at a Park & Ride near the Kennebunk Service Plaza on I-95. It quickly makes its way overtop the interstate and then weaves into the forest. The pathway is packed dirt, but it’s very wide, allowing most hazards to be avoided (like the thick mud pits we maneuvered around during our ride last spring). 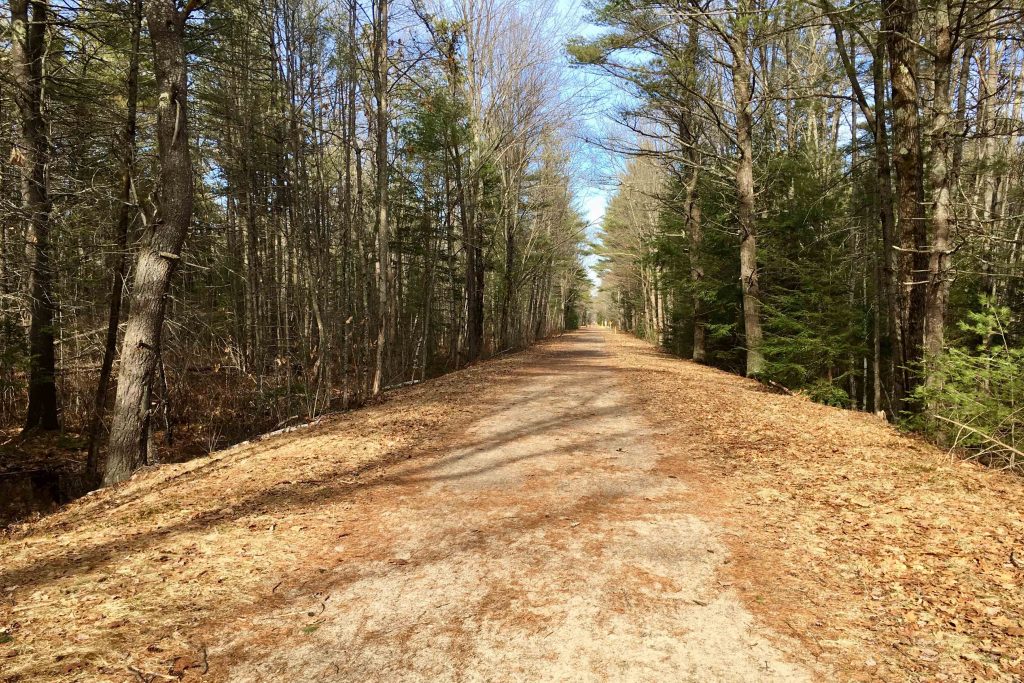 After six miles, the trail approaches the southwestern edge of the town of Biddeford. For almost five miles between there and the neighboring town of Saco, you’ll have to navigate city streets and country roads, though hopefully an off-road route will be created in the near future.

The trail then continues on through the woods for another 7.5 miles, where it unceremoniously ends at a small parking lot in Scarborough. While the start and end points are a bit anticlimactic, the trail is a fantastic way to see the dense forests of Maine from a dirt path that blends in with its surroundings.

Transportation: This trail is much more accessible by car, but if you’re an avid cyclist, the Amtrak Downeaster connects Boston to Portland (2.5 hours, $20 one-way + $5 to bring a bike onboard), which is 9 miles from the northern end of the Eastern Trail. If you’re bringing your bike on the train, you need to reserve space for it in advance

Rental: You can rent wheels in Kennebunk, Saco or Portland at Gorham Bike and Ski for $35 per day.

There are so many great and accessible options for biking in New England – so, what are you waiting for? Oh. It’s winter. Well… start planning some spring trips, then! 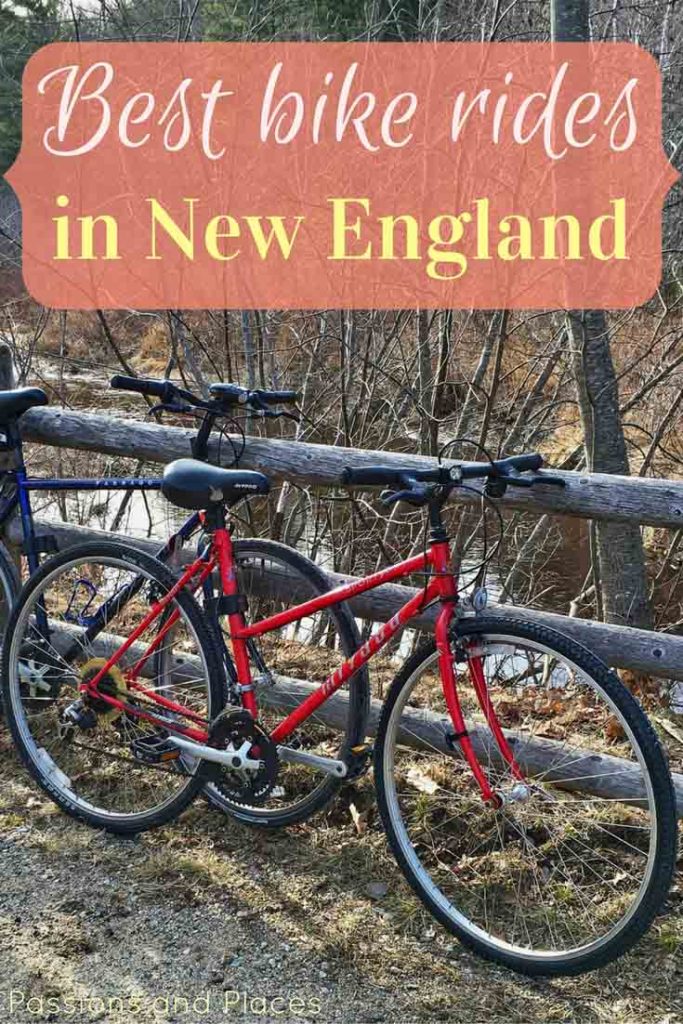 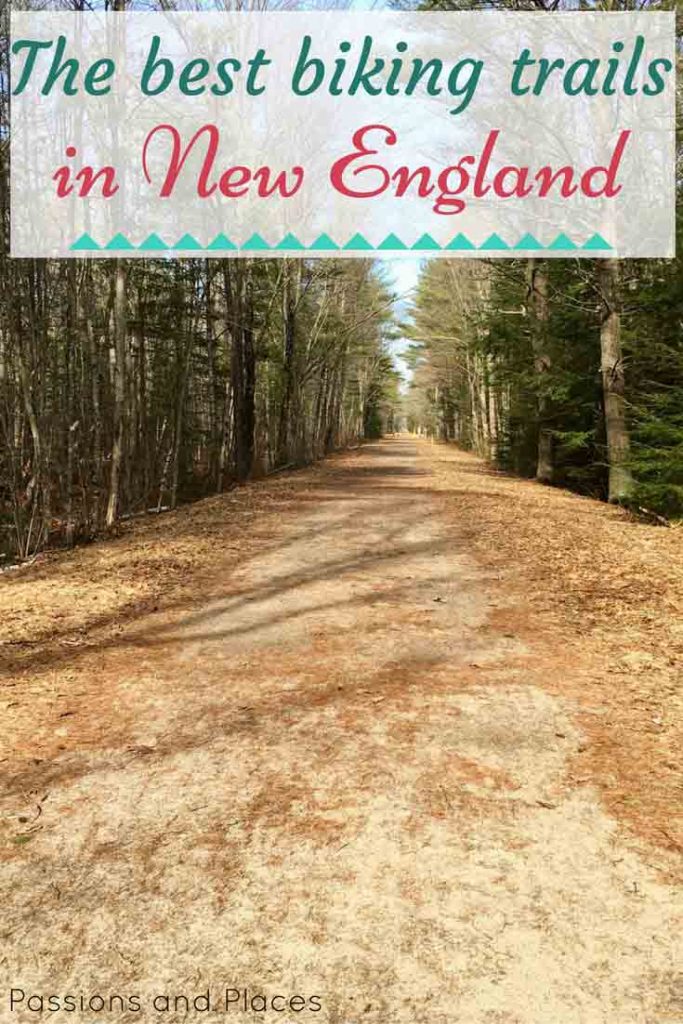