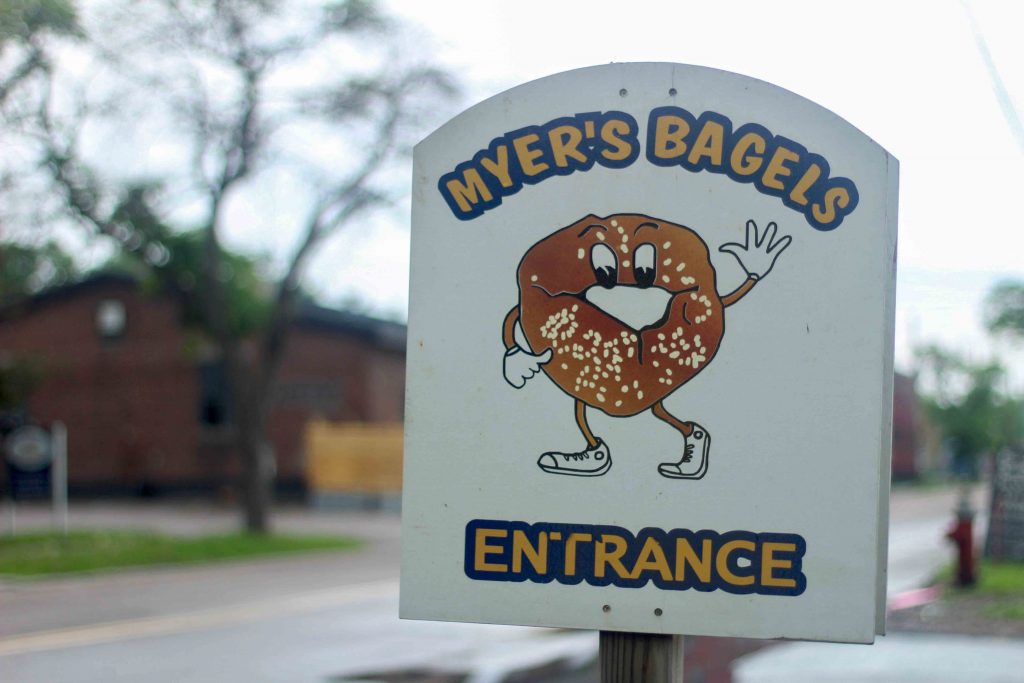 We often yak about how Burlington, Vermont, is one of our favorite towns. It has pretty much everything we love: loads of outdoor opportunities (cycling the Island Line Trail, hiking the Green Mountains, skiing Smuggler’s Notch), fantastic views of Lake Champlain, a great hippie vibe focused on sustainability and local production, and some of the best food we’ve ever had.

Not surprisingly, many of the town’s restaurants take pride in buying their meat, dairy, produce, and other ingredients from nearby farms (of which there are many). Burlington is a hotspot for vegetarian cuisine, too – not something you frequently find in a town of under 50,000 people.

All this comes together to make it a foodie paradise, so we wanted to share some of our favorite places to eat in Burlington, our beloved vacation getaway.

There are a lot of great coffee shops in Burlington, but Speeder & Earl’s is a mainstay, and it’s been going strong for over twenty years . For most of that time, they’ve been off the beaten path in the town’s industrial South End. Now that the area’s old warehouses have been converted to art studios and craft breweries, their shop feels right at home.

The wide selection of coffee beans and specialty drinks make it many people’s go-to place to start the day. One of my favorites drinks is the Clockwork Orange, a mocha flavored with hints of orange zest and almond.

Speeder & Earl’s South End location has a few tables and decent Wi-Fi if you’re looking to get some work done. They also have a convenient location on Church Street if you’re looking for a caffeine buzz during your shopping trip. It doesn’t have much seating, though (or much standing room, for that matter); don’t expect to check your email here.

Haven’t tried a Montreal-style bagel? They’re a significant, though not unwelcome, departure from the rotund baked goods of New York City (which seem to deteriorate in quality the farther they’re prepared from said city). These ones are smaller with a larger hole in the middle, and they’re boiled in honey-sweetened water and baked in a wood-fired oven, a process that gives them an earthier flavor and a crunchier texture.

As far as I know, Myer’s prepares the most authentic version of francophone Canada’s take on the bagel this side of the border. Traditionally, Montreal-style bagels are topped with poppy or sesame seeds, but Myer’s deviates from the conventional by adding maple (it is Vermont, after all), rosemary salt, chocolate banana, and a host of other unorthodox flavors to their menu.

They also serve up several sandwich options, in case you’re looking for more than a little cream cheese to compliment your bagel.

It’s kind of hard to go wrong with crepes – anything filled with Nutella is going to taste good, right? That being said, The Skinny Pancake has some really good crepes, made with very fresh ingredients; there’s a board on the wall showing how most of what goes into the crepes is produced within a hundred miles.

They have a few locations around Vermont, but the restaurant in Burlington is adjacent to the city’s beautiful waterfront park. Once you’ve had your fill of sweet and savory treats, take a walk along the edge of Lake Champlain – there are some very comfortable swinging benches overlooking the water if you do.

Look out for The Skinny Pancake’s cart on Church Street, too. It has a more limited menu, but a crepe always sounds great after a day of perusing the stores.

¡Duino! (Duende)’s cuisine is described as “street-food fusion,” but that doesn’t really do it justice. Some of their dishes are traditional – like hummus with pita and olives – while others meld multiple cuisines, such as Korean tacos with coconut rice and kimchi. Every menu item lists its country of origin, so you can tour the world with your taste buds.

The restaurant is connected to Radio Bean, a coffee shop, bar, and excellent live music venue. If you’re looking for a quiet evening out, ¡Duino! (Duende) might not be the best choice. But if you’re interested in experiencing some of Burlington’s bohemian culture, global street food-inspired dishes make an excellent complement to great tunes.

Great pizza made with local ingredients, a brick oven in the middle of the dining area with a roaring fire, and a partnership with Zero Gravity brewery – it can’t get much better than that. Pizza at American Flatbread has been my post-race meal after the Vermont City Marathon two years running (see what I did there?).

Recovery fuel it is not, but I don’t really care after 26 miles. We usually get the Revolution, a pie topped with caramelized onions and fresh mushrooms. During the summer, there’s outdoor seating on the patio, plus live music every Wednesday and a number of other events.

This is hands down Burlington’s best pizza, serving up wood-fired pies with a deliciously smoky, crispy crust. Beyond that, their toppings are gourmet and often locally sourced – ranging from creamy burrata cheese from Bennington’s Maplebrook Farm to their own house-made sausage.

If you’re not interested in filling up on pizza, no problem; it’s also a great place to have one of the area’s numerous craft beers (and Vermont has more breweries per capita than any other state, so there’s a lot of them to try). The fireplaces and oak barrel bar tables invite you to stay and have a few drinks with friends even if you won’t be dining there.

For dinner though, it’s a good idea to make reservations ahead of time, especially on the weekends, as it does get crowded.

This was Jen’s first dining experience in Burlington, and oh boy, did it set the bar high. Everything on the menu is vegetarian (most are actually vegan), and about a third of them are gluten-free. Positive as that may sound, for vegetarians accustomed to only having a few options at each restaurant, the number of choices can be overwhelming.

If you’re considering becoming a vegetarian, planning a dinner out with a veggie friend, or just want to eat healthier, this place is a good starting point – I promise, you won’t even miss the meat.

This is a place we just keep going back to, with its lively atmosphere and huge selection of area microbrews. There are tons of good choices on the menu, and even for vegetarians, it can be hard to choose.

The cheese platter is always a good starter, though, with offerings sourced from nearby farms, and the fries are the best in town (sorry, Al’s French Frys). The spiced roots & quinoa plate is great if you’re feeling like something healthy – and the mac ‘n cheese is even better if you’re not.

The Farmhouse is also known for its burgers, and the two veggie burger options are great, too. Bonus: they allow half pours of the beers on tap, so you can try more of them.

The Farmhouse is one of the busiest restaurants in Burlington in the evenings, so expect a bit of a wait (they don’t take reservations). During the warmer months, there’s a small beer garden out back where you can wait. When it’s cold, you can wait in the basement where there’s a bar and some seating. Relax and enjoy yourself, your table will eventually be ready.

A post shared by The Farmhouse Tap & Grill (@fhtgburlington)

Okay, this one isn’t unique to Burlington, BUT it’s the birthplace of the famous ice cream company – so why not indulge in a cup or cone while you’re there? Their location on Church Street makes it an easy dessert to pick up after a day of exploring the town.

Ben & Jerry’s comes out with new flavors all the time, but my favorite right now is Jimmy Fallon’s Tonight Dough: caramel and chocolate ice cream swirled with chocolate cookies and both chocolate chip and peanut butter cookie doughs. It’s a tasty assortment of all things late-night sweets.

Got a few (or several) friends with you? Pick up the bucket of flavor known as the Vermonster (a twenty-scoop sundae with toppings) and dig in.

Click here for an interactive version of the map. 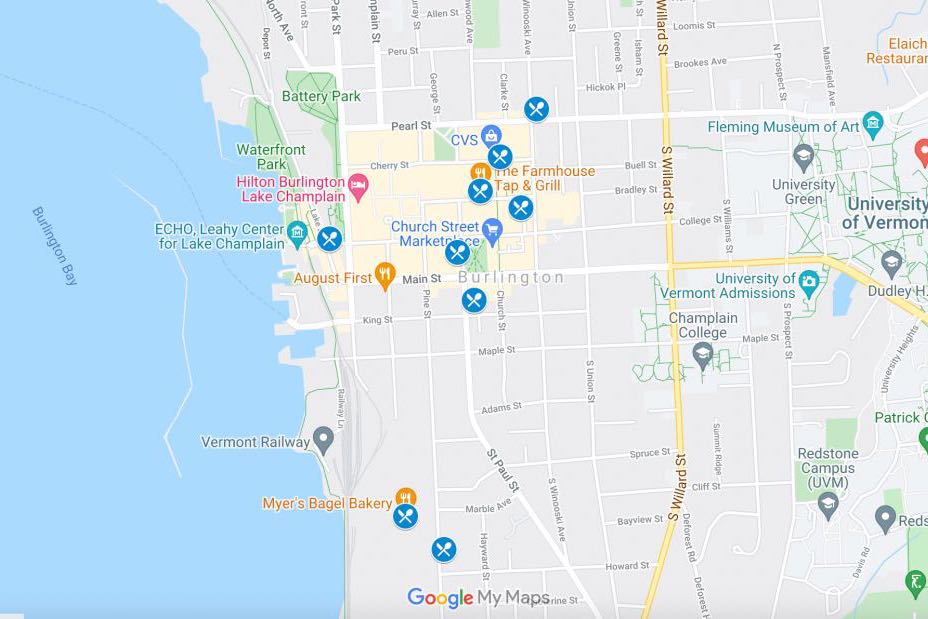 Did we leave out your favorite Burlington restaurants? Let us know in the comments! 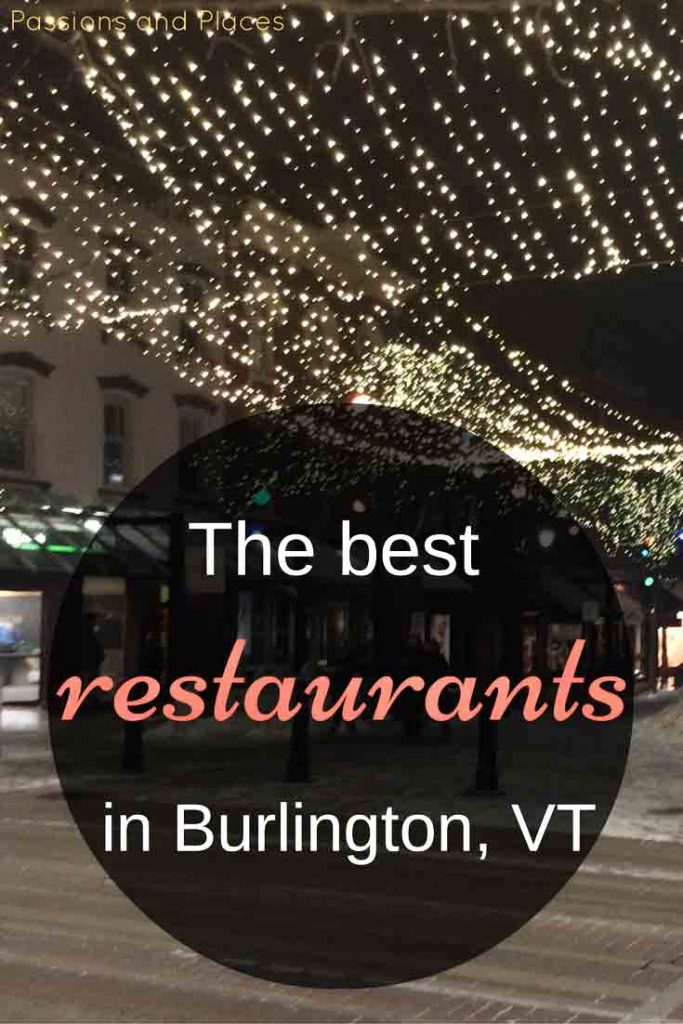 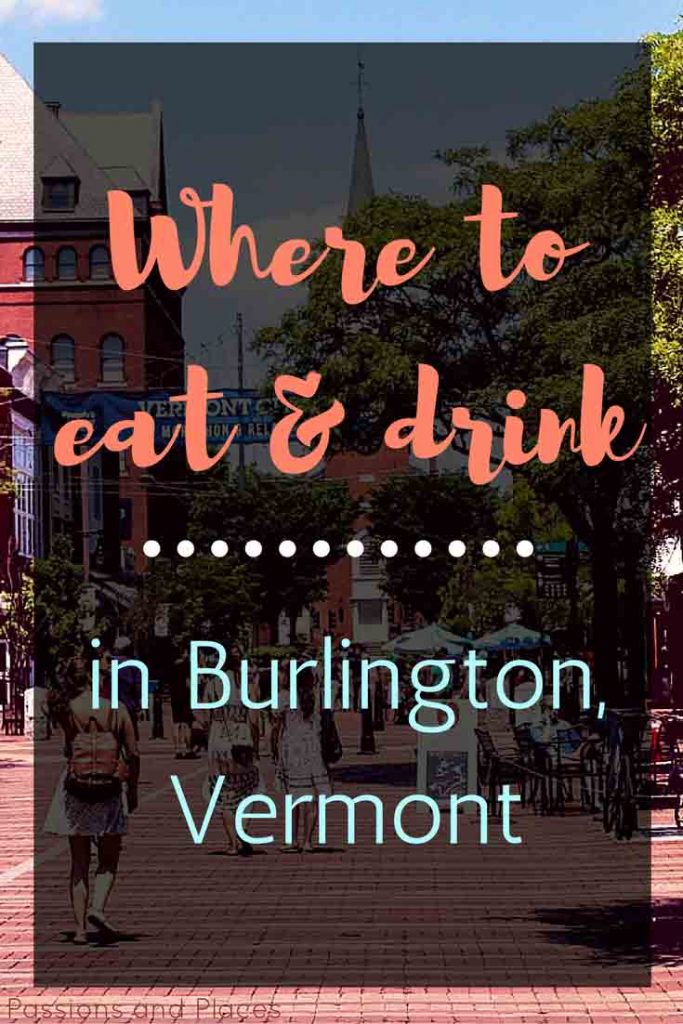