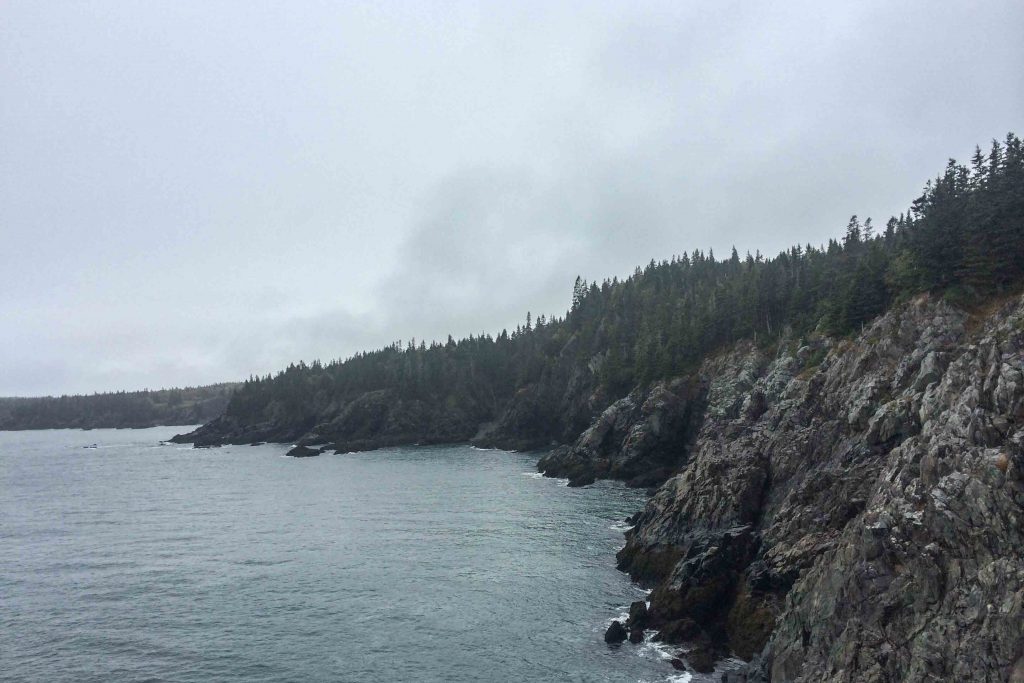 As I’m originally from Montana, it’s probably no surprise that one of my favorite things about living in New England is the easy access to nature and abundance of hiking options. Of course, many of the region’s most beautiful spots are often packed with visitors, making it hard to find that out-in-the-wild feeling.

But one place that really does feel out in the wild is Cutler Coast, a hidden gem in Maine – only a few hours from Acadia National Park, and with many of the same beautiful granite cliffs and ocean views, but far fewer crowds.

Getting to Cutler Coast

Unless you happen to live in Bangor, which is still two hours from Cutler Coast, it’s going to be a long drive; from Boston, it can take almost six hours to get there. It may not be quite as remote as the more northern parts of Maine, but Cutler Coast feels like the middle of nowhere.

So, if it’s so difficult to get to and the terrain is similar to Acadia anyway, why am I suggesting Cutler Coast? Essentially because it’s difficult to get to. Acadia is one of the most crowded parks in the U.S. – it’s one of the smaller parks, but gets over two million visitors each year. As it is the only national park in the Northeast, Acadia’s a great vacation spot.

But it’s harder to enjoy the sounds of the ocean crashing against the natural granite seawalls when you’re surrounded by crowds of people. At Cutler Coast, though, you’re unlikely to see more than a handful of other hikers the whole time you’re there.

Two trails run through the Cutler Coast Public Reserved Land: the Coastal Trail and the Inland Trail. While you technically could hike out and back on either trail, a more interesting option is to combine them for a loop hike. The two trails can be used to make a 9-mile loop through Fairy Head, where there are three campsites, or you can make it a five-mile loop by using the Black Point Brook Cutoff Trail between the Inland and Coastal sections.

Both trails start at the same point, and the first half-mile winds through dark, lush cedar woods. It’s the kind of forest I love coming to Maine for. In New Hampshire and even Vermont, so many of the trails are lined with granite boulders, and the flora is limited to some meager trees trying to eke out a life in their harsh environment. Not here on the coast of Maine, where the forest is thriving.

The moisture of the nearby ocean makes everything green and alive, and I love the damp, woodsy smell of it. After a half-mile, the trail splits in two, and you can choose to start the loop on the Inland Trail or the Coastal Trail. Using the Coastal Trail, the ocean is only a mile from the fork. 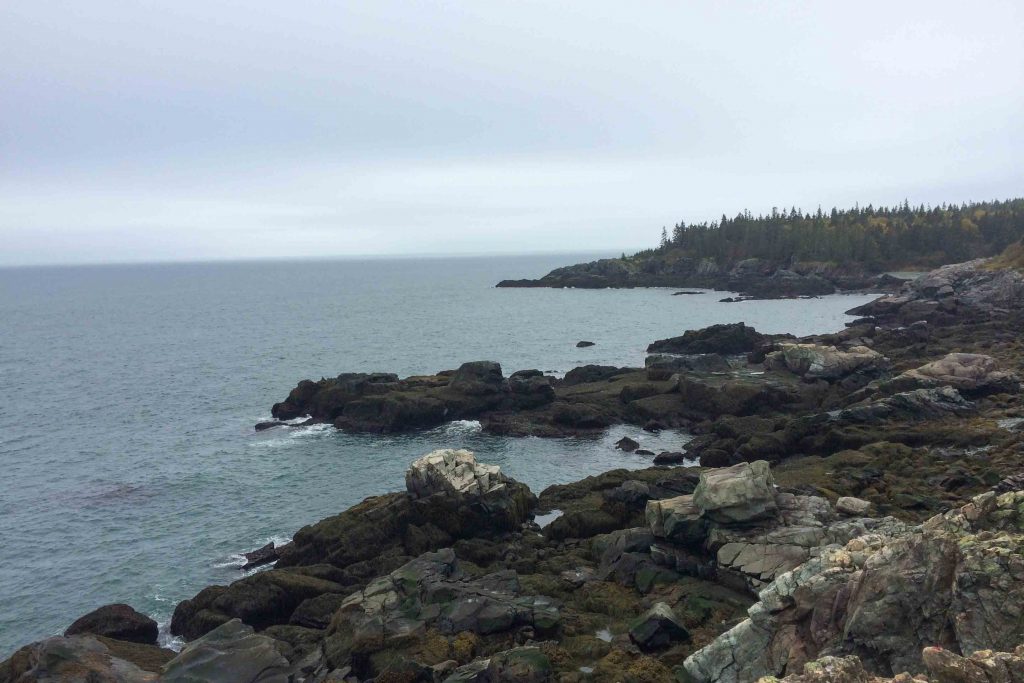 From there, the Coastal Trail meets the ocean and turns to run alongside it for the next three and a half miles. The scenery in this section is amazing, with hundred-foot-tall black granite cliffs that drop sharply into the dark waters of the Bay of Fundy.

You can climb down into one of the little coves if you want to get to the gravel beaches below. Make sure you don’t fall asleep on the beach, though – the tide rises fifteen feet and completely fills the cove with seawater!

The Coastal Trail rises and falls in elevation with the natural terrain of the granite cliffs; it’s not a grueling hike, but you’ll be getting some exercise. Some sections of it are a bit overgrown, with bushes reaching into the middle of the trail at times. 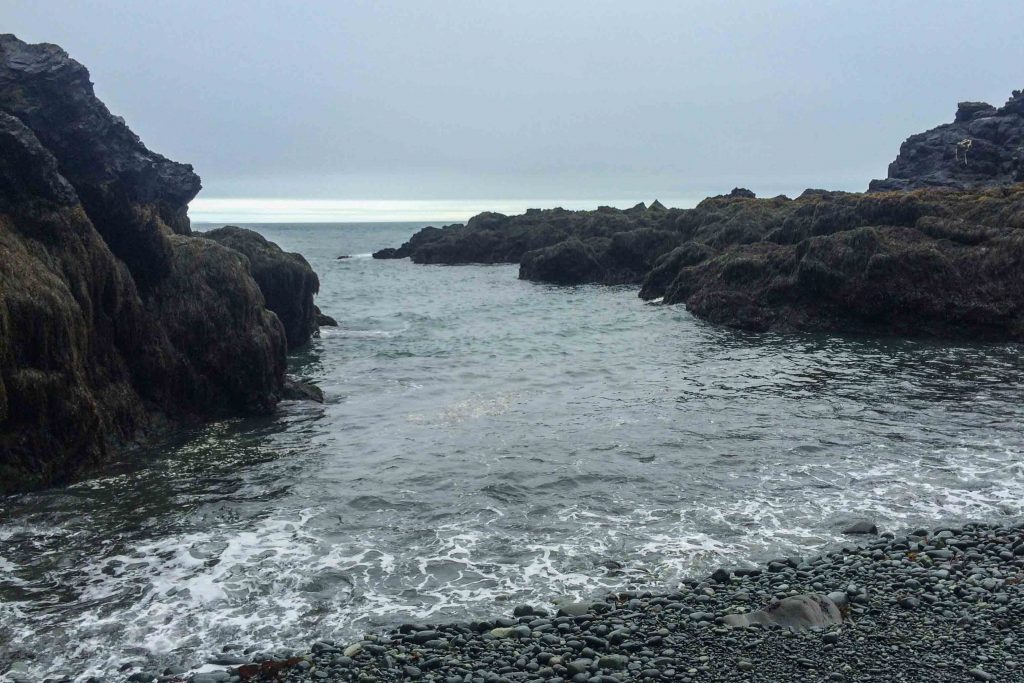 If you’ve had enough of these striking ocean views after a mile and a half of hiking (though I’m not sure why that would happen) or you need to get back to civilization, you can cut the loop in half by taking the Black Point Brook Cutoff Trail, which takes you to the Inland Trail in under a mile. If you want to do the whole loop, it’s another two miles to Fairy Head, which marks the end of the Coastal Trail (and the ocean views) and the beginning of the Inland Trail.

The scenery at Fairy Head is similar to the section at the beginning of the hike, with lots of cedar trees and swampy marshlands. There are also some nice open meadows along this section, if you’re looking for a place to relax or maybe have a picnic lunch.

You can also make this an overnight trip by camping at Fairy Head, four and a half miles from the trailhead. Even though it isn’t very crowded, there are only three campsites, so it’s probably a good idea to get started early if you’re hoping to nab one. Of course, watching the sun peek out over the Bay of Fundy makes an early start worthwhile in itself.

Other Things to Do near Cutler Coast

While this area of the coast is very remote, there are a couple other destinations nearby, if you’re eager to explore Maine’s Down East region. Quoddy Head State Park is only 25 minutes away and has several miles of hiking terrain that’s similar to the Cutler Coast.

More importantly, it’s the site of West Quoddy Head Lighthouse, the easternmost point in the contiguous U.S. Its red-and-white-striped paint is an iconic landmark of Maine and a monument to the state’s maritime history.

If you packed your passport, Roosevelt-Campobello Peace Park is also only about 25 minutes from the Cutler Coast, but requires crossing into Canada. Campobello Island, where the park is located, is something of a geographic oddity, as its sole connection to the mainland is a bridge into Maine. Other points in Canada can only be reached by ferry from the island. Nonetheless, the bridge to the island does have a staffed border crossing where you’ll have to show your passport.

The peace park is the site of the Roosevelt family cottage, where they came to summer (yes, that is “summer” as a verb) back in the early 20th century. It’s a beautiful park with plenty of walking paths and open spaces for a picnic, and the cottage has been turned into a museum with historical artifacts of the Roosevelt aristocracy and a free seminar that includes tea, cookies, and a lecture about the life of Eleanor Roosevelt.

Cutler Coast is definitely one of my favorite hikes, not because it has the most impressive scenery or because it’s anything challenging to overcome, but because the whole experience reminded me of the peace that we can find in nature.

It’s so hard to feel alone with your thoughts in the chaos of Boston, and even out in the wilderness of New England, you’re never the only one on the trail. Cutler Coast is a place where you can have some time with yourself and the vastness of the ocean, and the space to think about what’s important in life.

Where’s your favorite place to go hiking in Maine? 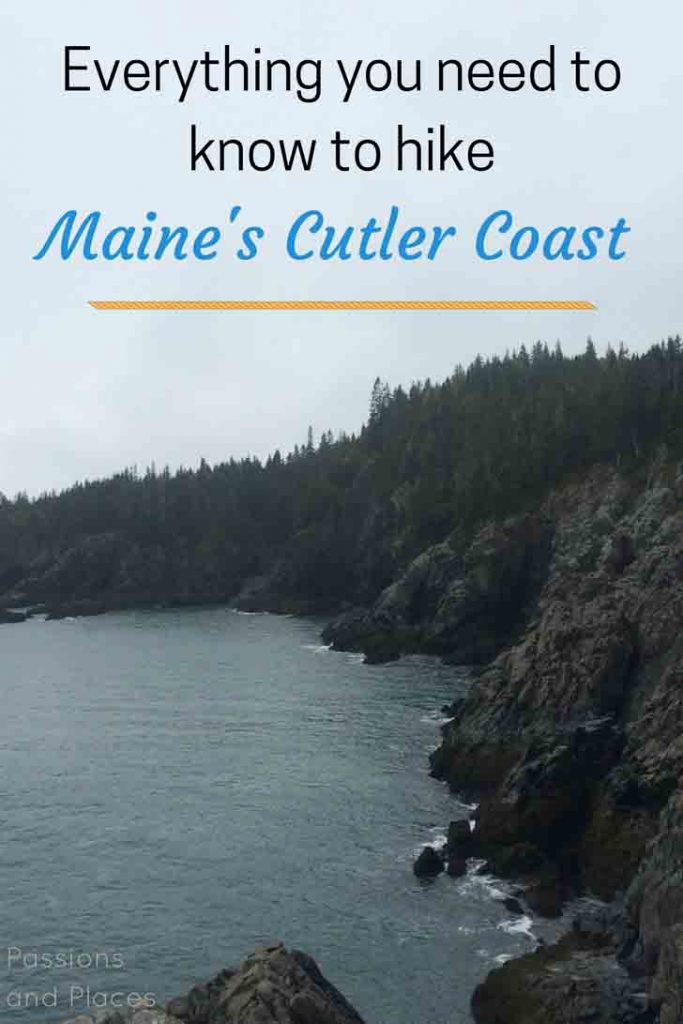