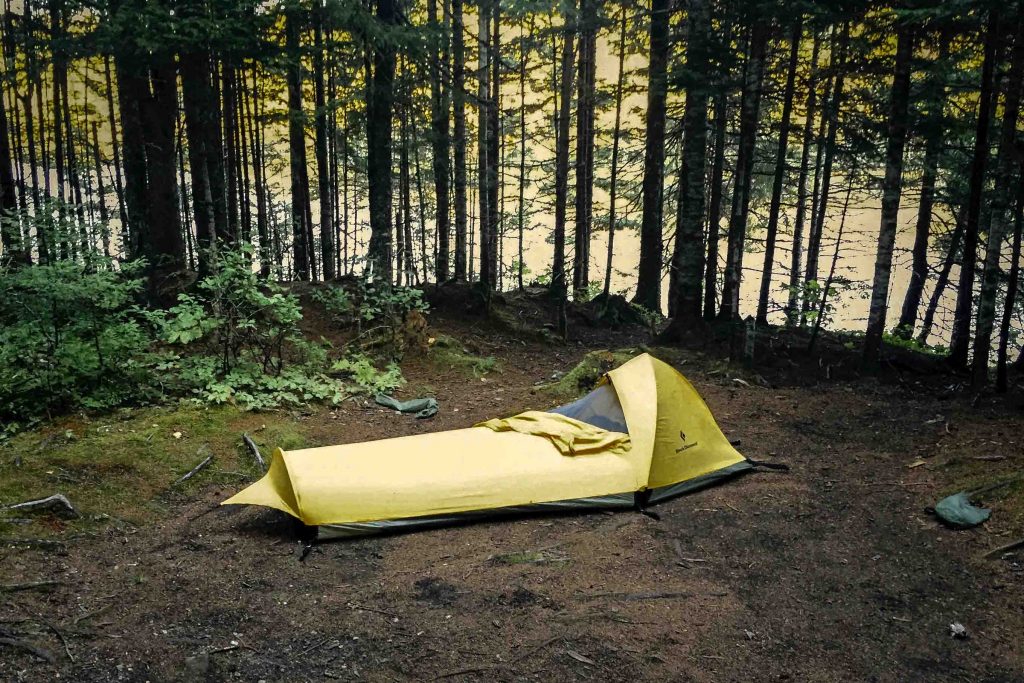 If you’re not Canadian, you’ve likely never heard of Fundy National Park, and even if you are, you may never have considered a trip there. With just 281,000 visitors last year, Fundy doesn’t even crack the top 10 of Canada’s most popular parks.

Its claim to fame is that it has the highest tide in the world – the greatest difference in elevation between high tide and low tide. Doesn’t sound like something to make a big trip for, does it? So what makes this such a great park, besides that whole tide thing (which is actually really cool)? Its location, size, and lack of crowds, not to mention all the activities and landscapes it has to offer. 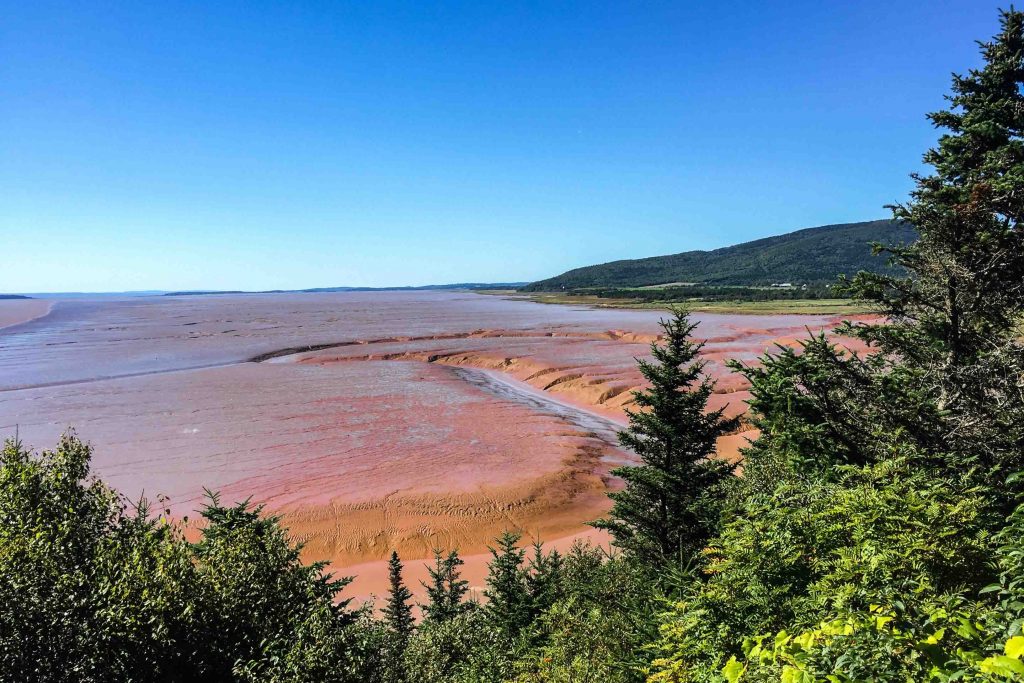 I had a chance to visit Fundy a while back, but never got around to blogging about it. Well, what better occasion to write about one of the coolest Canadian national parks than Canada Day? 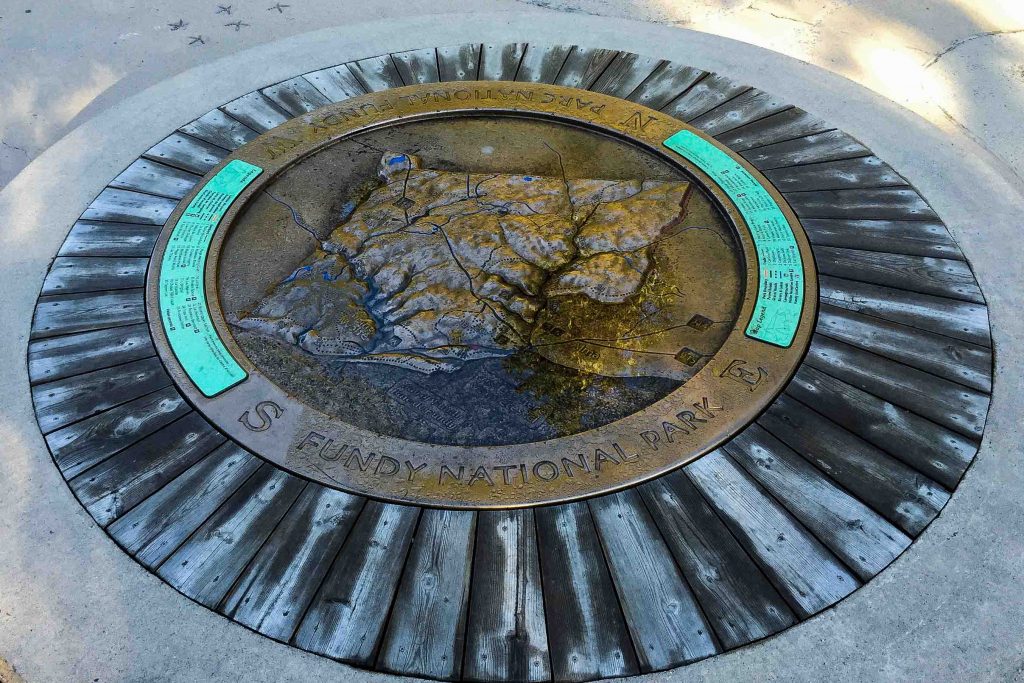 Located in New Brunswick, one of Fundy’s biggest benefits is its proximity to urban areas; it’s eight hours from Boston and a little under ten from Montreal. That doesn’t sound close at all, does it?

If you live out West and have plenty of national parks at your disposal, being “within a day’s drive!” of one doesn’t seem like a big deal. But for East Coasters wanting to visit a park, Fundy is one of the most accessible. Nature lovers in Boston know that America’s East Coast has a dearth of national parks (yes, Acadia, but Fundy’s relative lack of visitors makes it an attractive option in comparison to the hoards that descend on New England’s only park each summer).

A trip from the East Coast to one of the more popular national parks, like Yellowstone or Banff, necessitates a week off of work when you take the travel time into account, while Fundy can be enjoyed over a long weekend – which brings me to the next point. 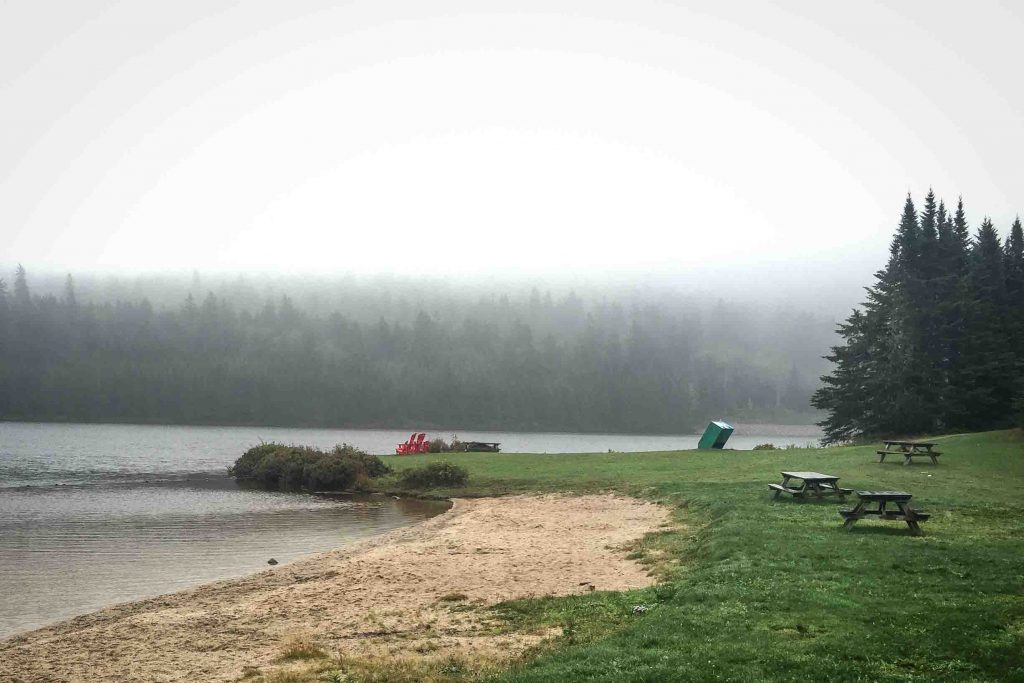 I love how manageable this park is. You might think a small park would be less interesting than a massive one – Banff is 32 times larger than Fundy – but Fundy is a park you can explore in its entirety in just one visit. There are a dozen or so trails, and none of them require extended backpacking trips. The park has only four backcountry campsites, making it easy to sleep in each of them during one trip.

The Lack of Crowds

Some visitors complain about the $14 entry fee given that it’s such a small park, but those people are discounting the unique beauty that Fundy offers. It doesn’t have raging geysers like Yellowstone or the soaring mountains of Jasper – it’s a quiet place that forces you to look for the subtler forms of beauty: moss-covered bogs, lush pine forests, and the dramatic cliffs along the Bay of Fundy.

But the real beauty of it is that all of these sights can be enjoyed without a crowd of selfie stick-wielding tourists breathing down your neck. In fact, half of the park’s visitors are actually residents of the Maritime Provinces and live within a few hours of the park. 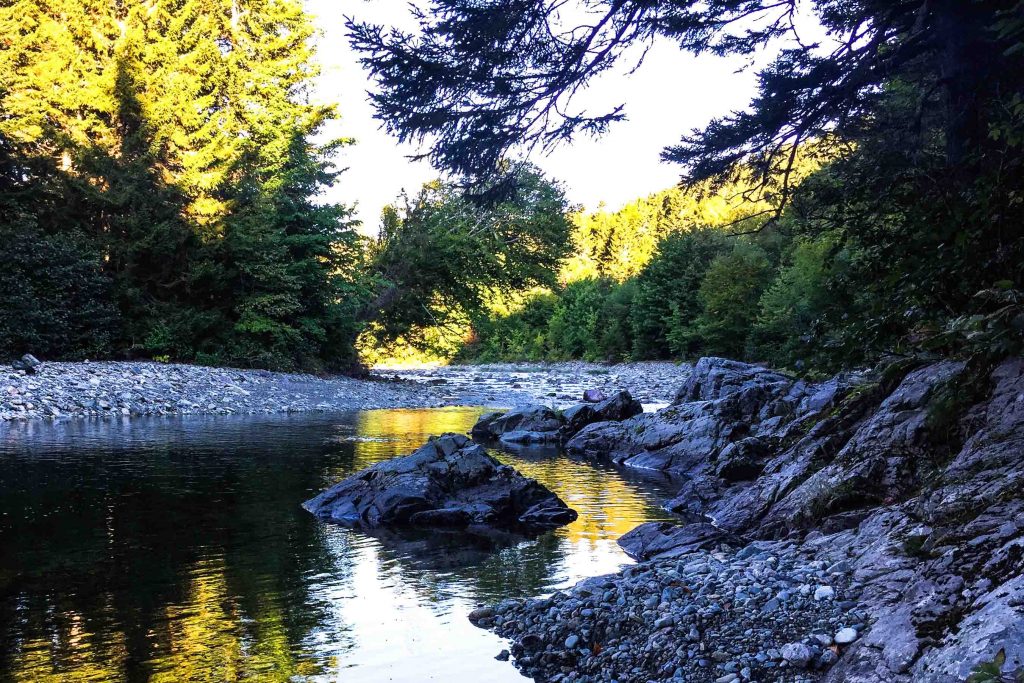 It’s free this year! In celebration of 150 years of Canadian confederation, there are no admission fees to any Canadian national parks all year. (Note that the admission fee waiver doesn’t apply to backcountry camping permits, which are $9.80 per person per night.)

Okay, so Fundy’s a small, under-visited, but actually-pretty-cool national park, but what is there to do there?

Dickson Falls are the perfect introduction to Fundy, and the trailhead for this hike is only two miles from the visitor’s center. The trail is just a mile long, but in that short distance, there’s still a whole lot to see. 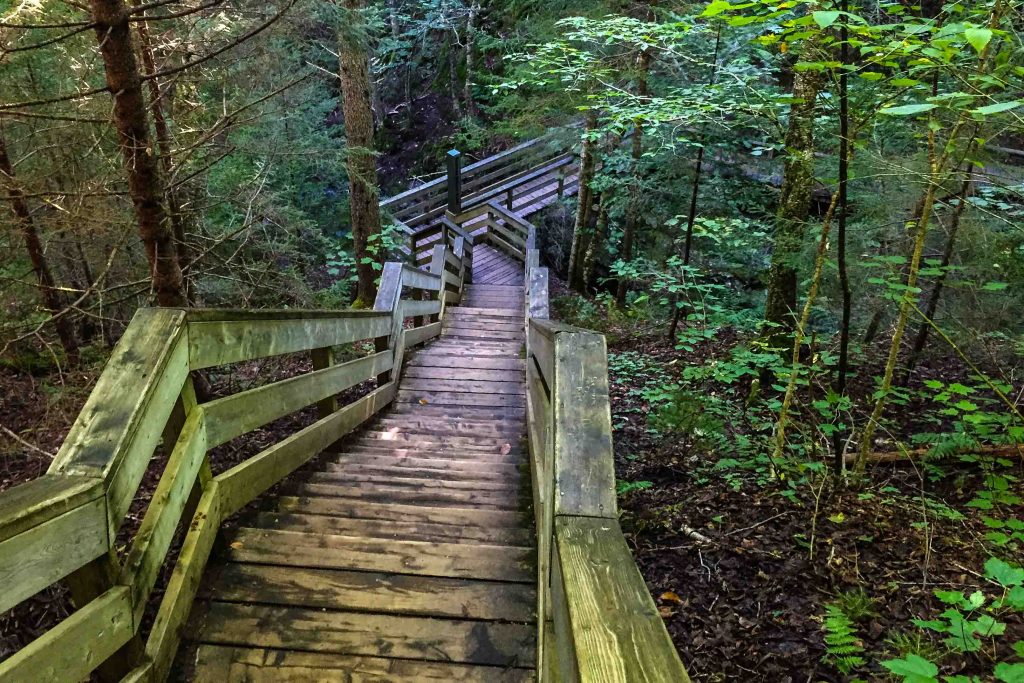 The hike starts off by descending through a pine forest, and the temperature quickly drops a few degrees as you reach the stream below. The dozens of waterfalls in this area create a unique microclimate that’s cooler and more humid than the rest of the park, and the landscape of pine trees above transforms into a tiny temperate rainforest as you descend.

The hike then follows a series of wooden boardwalks around the waterfalls, to both protect the fragile ecosystem and prevent visitors from slipping on the wet terrain. After a short walk, the trail ascends back to the starting point. It’s a great quick day hike, and a really cool one for kids and anyone who doesn’t want a big backcountry adventure. 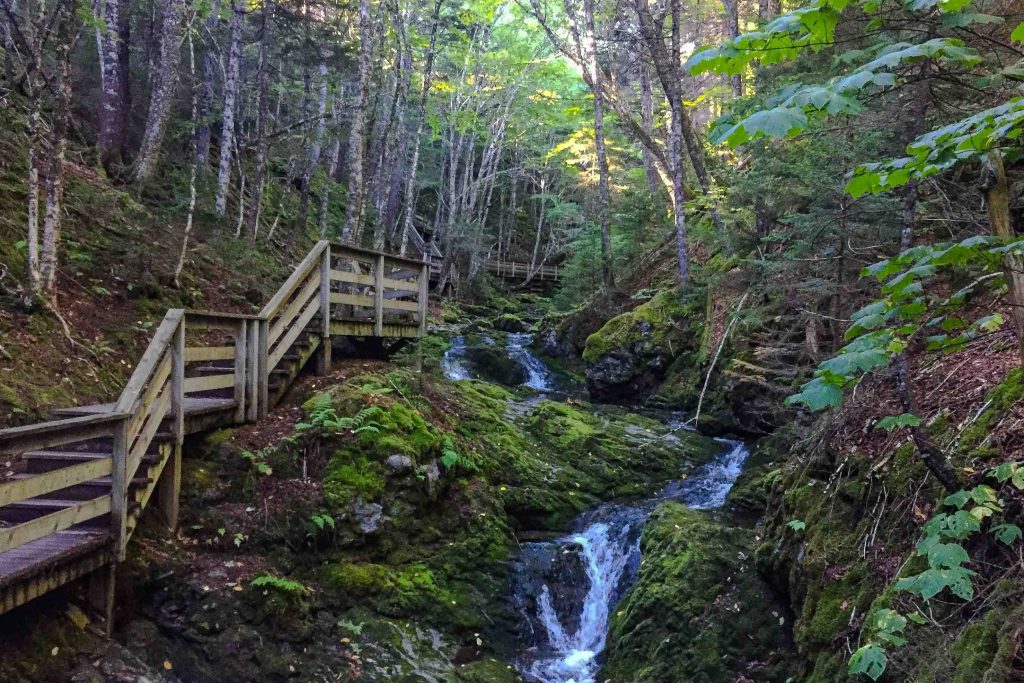 This is one of the premier hiking trails in the park, but it starts at a fairly nondescript pullout in the road just before Point Wolfe Campground (if you reach the red covered bridge, you’ve gone too far).

The Coastal Trail embarks on a five-mile journey along some of the park’s most dramatic seaside cliffs, with spectacular views of the Bay of Fundy throughout much of the trek. Right away, there’s a 350-foot rise in elevation within the first mile, which can make it seem like it’s going to be a more strenuous trail than it really is. But that’s the most challenging section, and most people can easily do the hike in three hours or less. 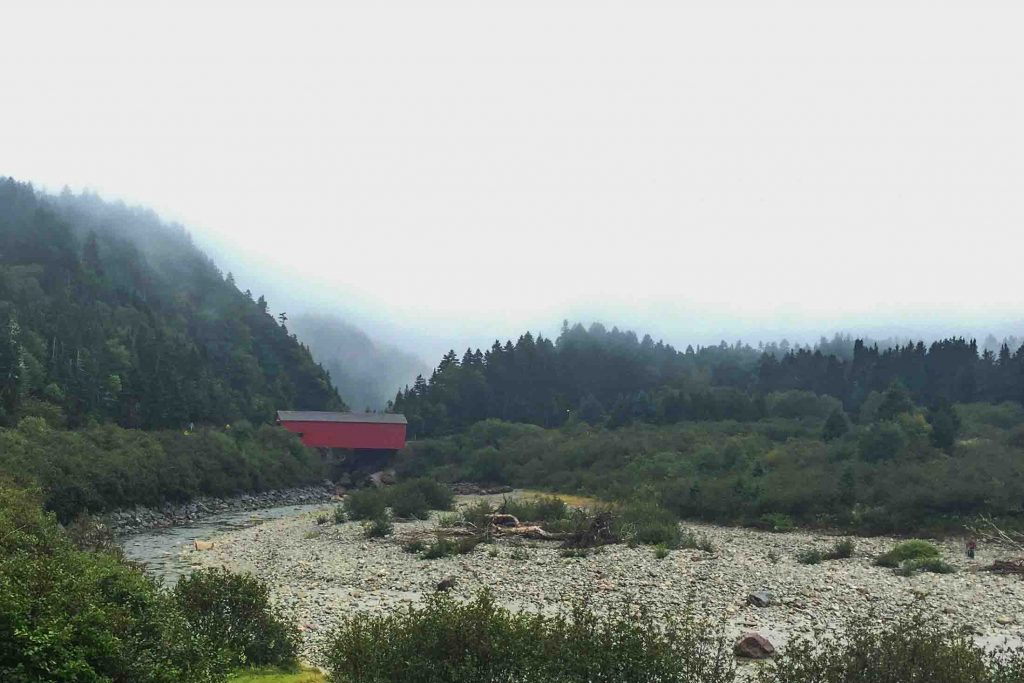 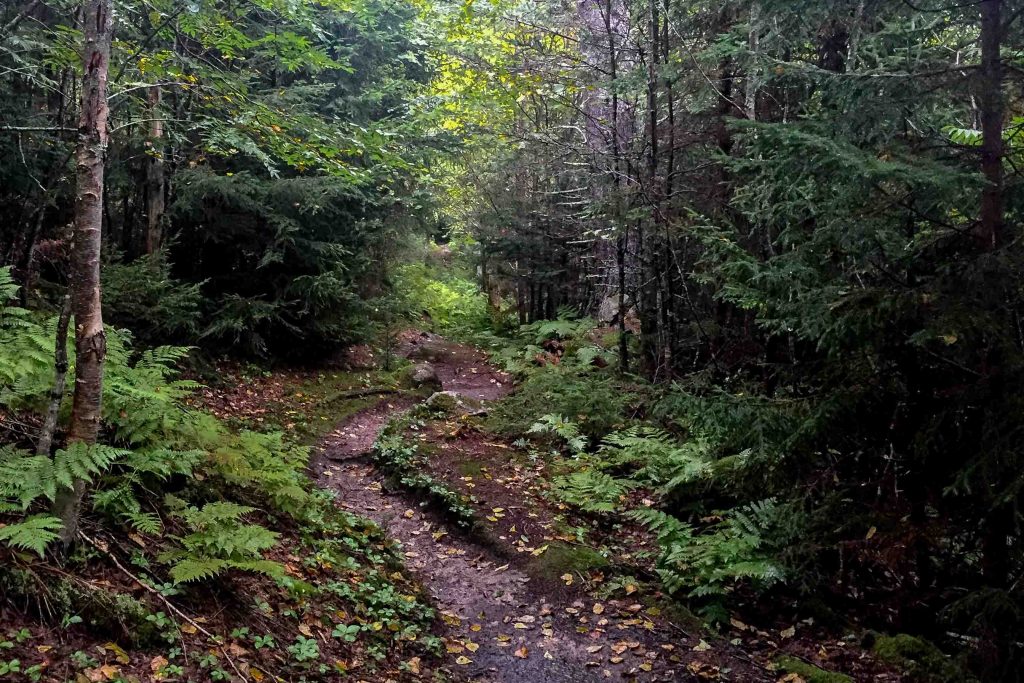 The first few miles of the trail wind through dense forests that can get a bit creepy when the heavy fog from the bay rolls in. When it does, it’s challenging to see more than 20 feet in front of you. But around its mid-way point, the trail starts to descend to the beach and out of the fog; it will feel like a completely different world than just a few miles before.

A few miles later, the trail terminates at a parking lot at the northeastern edge of the park’s golf course. If the tide is out, you can walk along the beach all the way to the town of Alma almost a mile farther east. Since this is a one-way hike, I dropped a bicycle in Alma beforehand and pedaled back to the trailhead along the main road instead of retracing my steps. 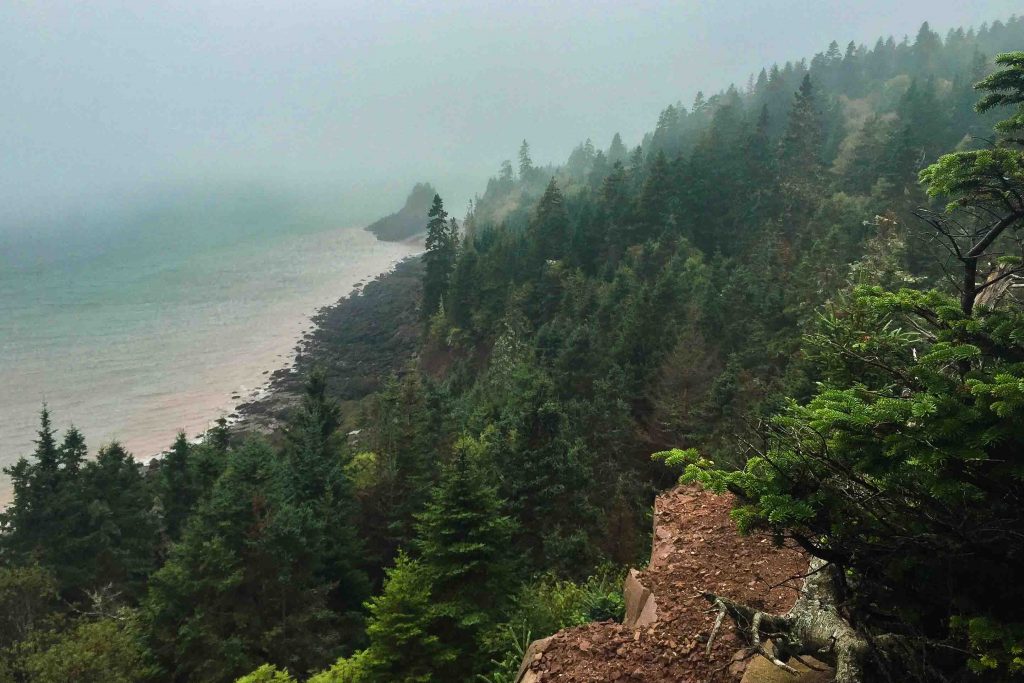 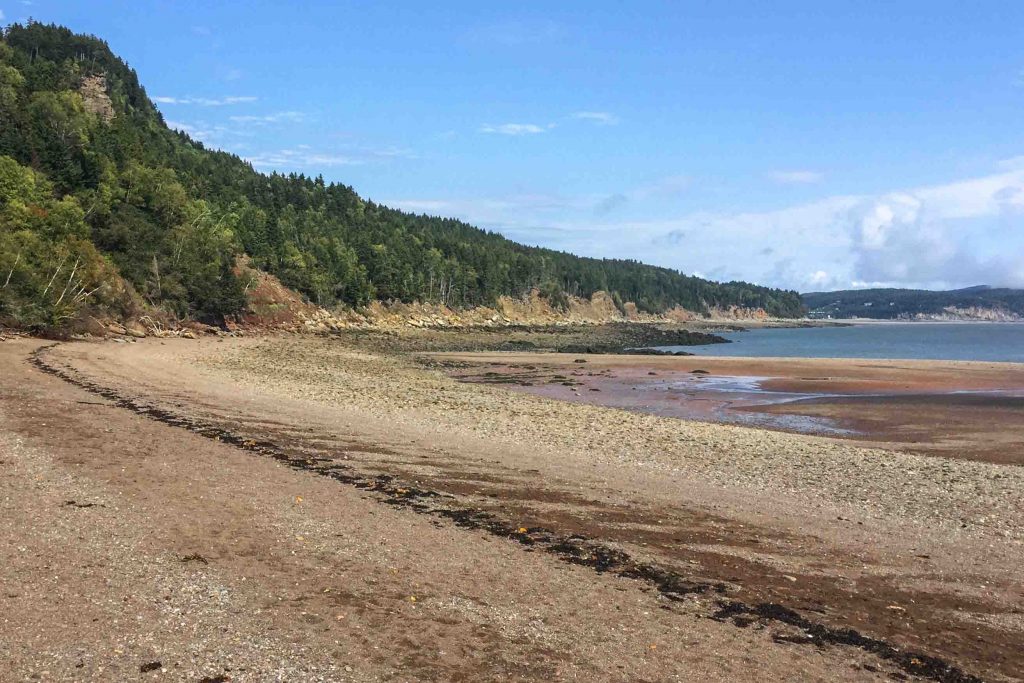 Fundy has four backcountry camping areas, each with two campsites: Marvin Lake, Tracey Lake, Chambers Lake, and Goose River. I spent a night at each one of them, and Goose River is easily the best.

Though the other camping areas are located next to incredibly beautiful and tranquil lakes or creeks, the Goose River site is situated on a gravel beach at the mouth of the namesake river. Dramatic stone cliffs frame your picture-perfect views of the Bay of Fundy and in the morning, you’re treated to a striking view of the sunrise over Nova Scotia across the bay. 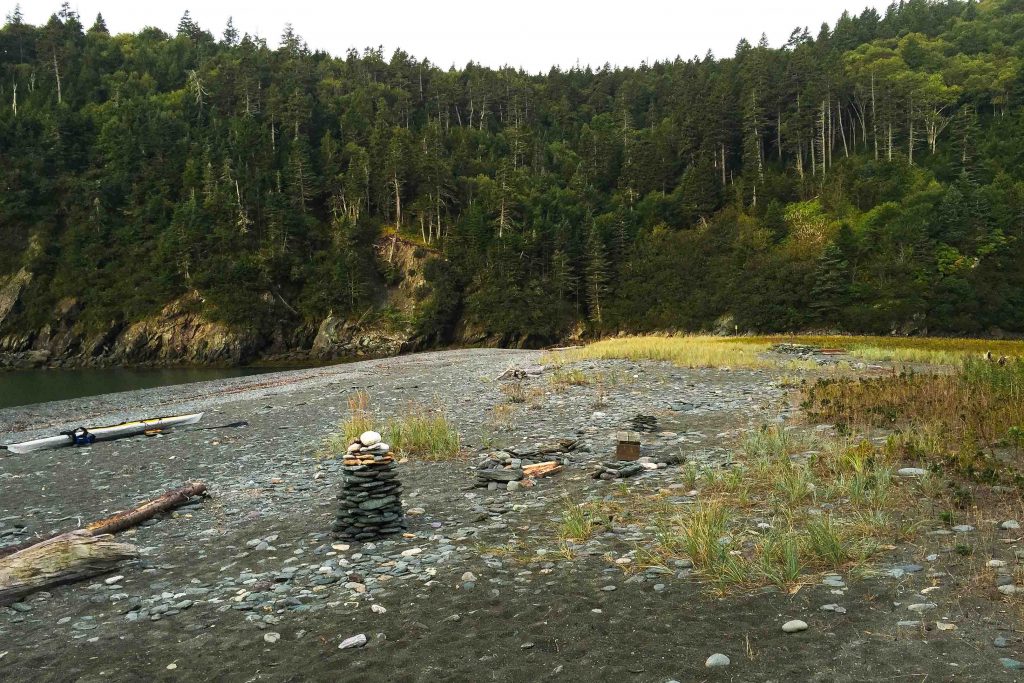 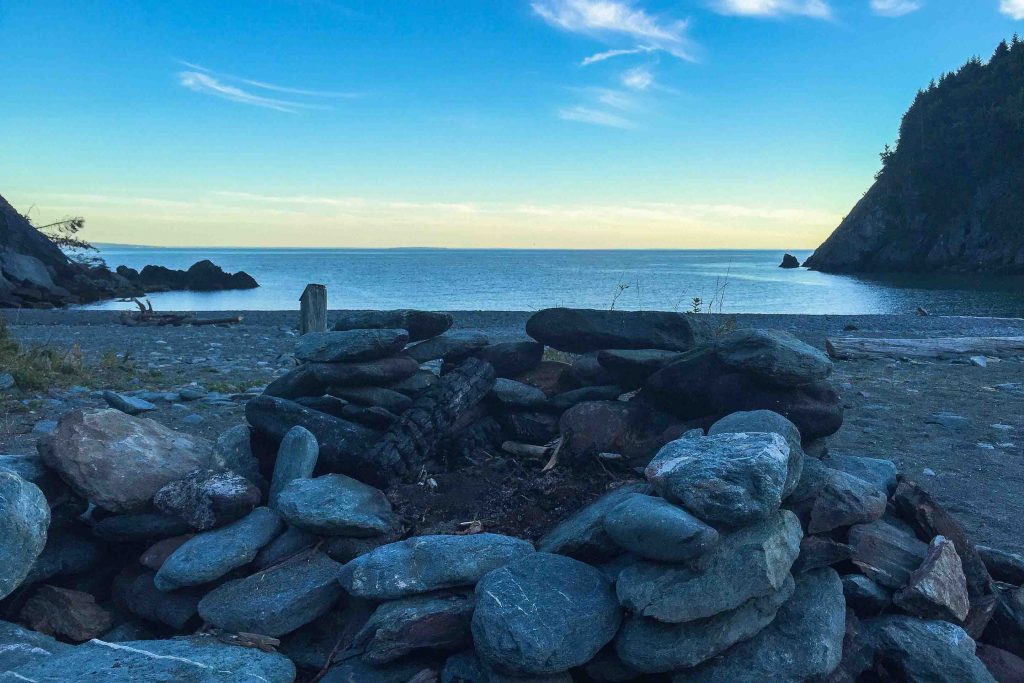 The trail to reach Goose River is five miles long and is rather difficult compared to most in the park. However, it can also be reached by kayaking six miles from Wolf Pointe campground. There are no kayak rental facilities in the park, so you’d have to bring your own (another time it was nice having a folding kayak that fits in the trunk of my car).

Admittedly the waves were a bit rough, and the chilly water and gusting wind made for some cold paddling when I visited in September. But it was well worth it to see so much of the rocky coastline that is inaccessible to most park visitors. 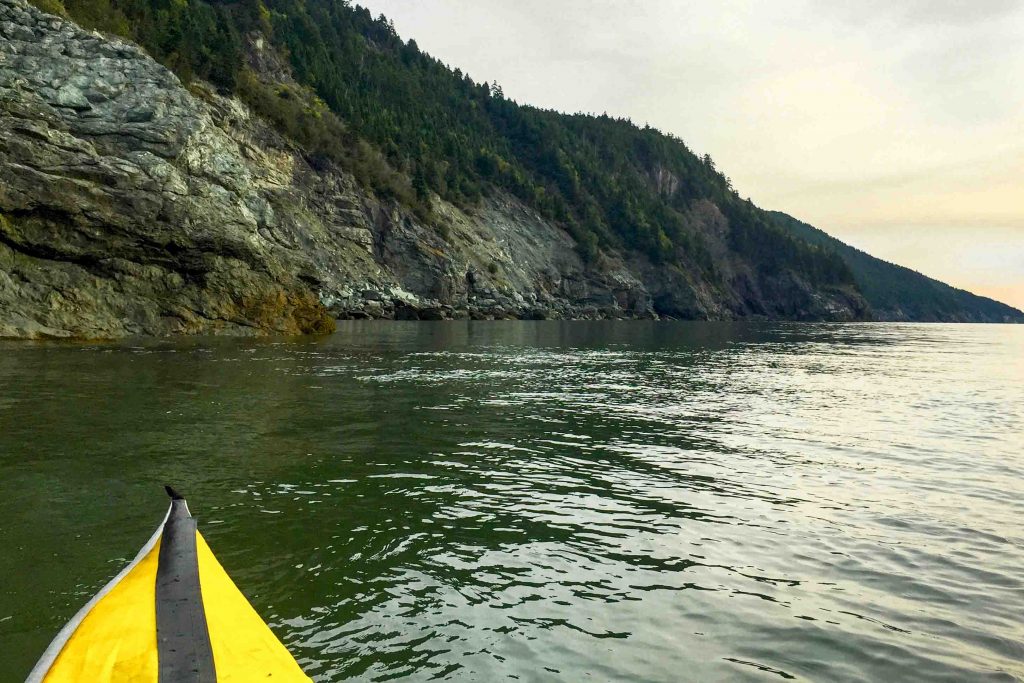 The Hopewell Rocks actually lie outside the park, but any trip to Fundy should definitely include a visit to this strange geological/hydrological feature. Like I mentioned before, the Bay of Fundy is known for having the highest tides on Earth – but it’s not that easy to imagine what it looks like.

In other parts of the bay, it’s possible to see a mile or two of ocean floor at low tide, which is interesting in itself. But the Hopewell Rocks are a totally different sight, and it can really only be explained with a photograph. 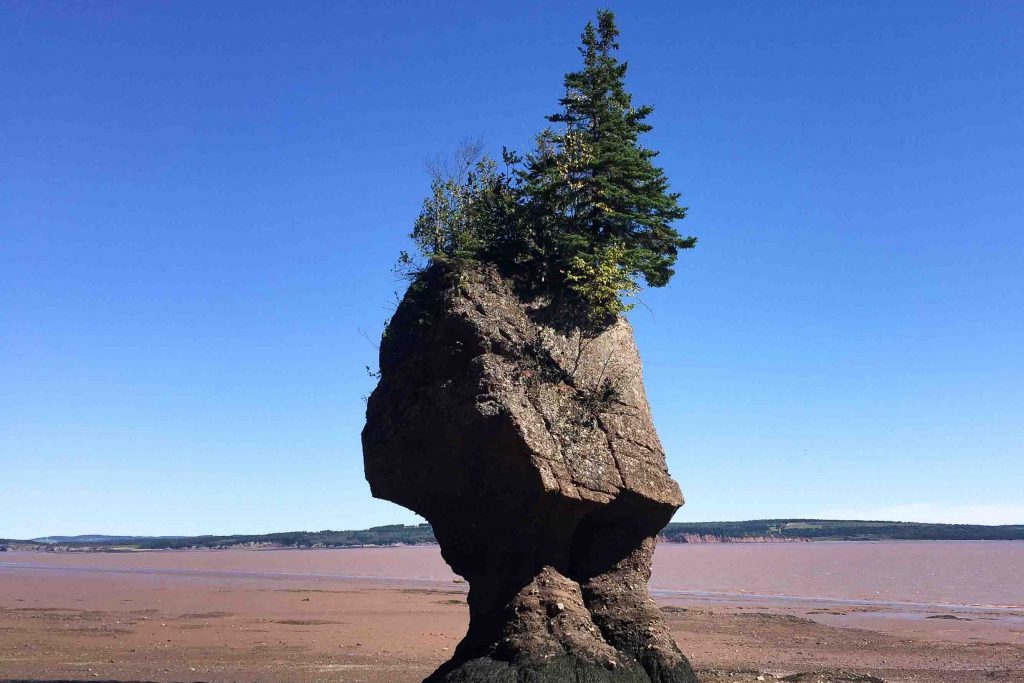 When the tide goes out, a few miles of ocean floor are exposed, revealing that the bottom of the rocks have a very different shape than what is visible during high tide.

As it’s not part of the park, there is a separate admission fee to access the Hopewell Rocks ($10 for adults and $7.25 for children). The rocks are open for tours from May to October; no admission is charged during the off season, but you’ll have to walk or snowshoe from the main road, as the parking lot is not open.

The visitors center doesn’t have a whole lot of information, so just head down to the shore and have fun milling around underneath the rocks. But be sure you head back up before the tide comes in… 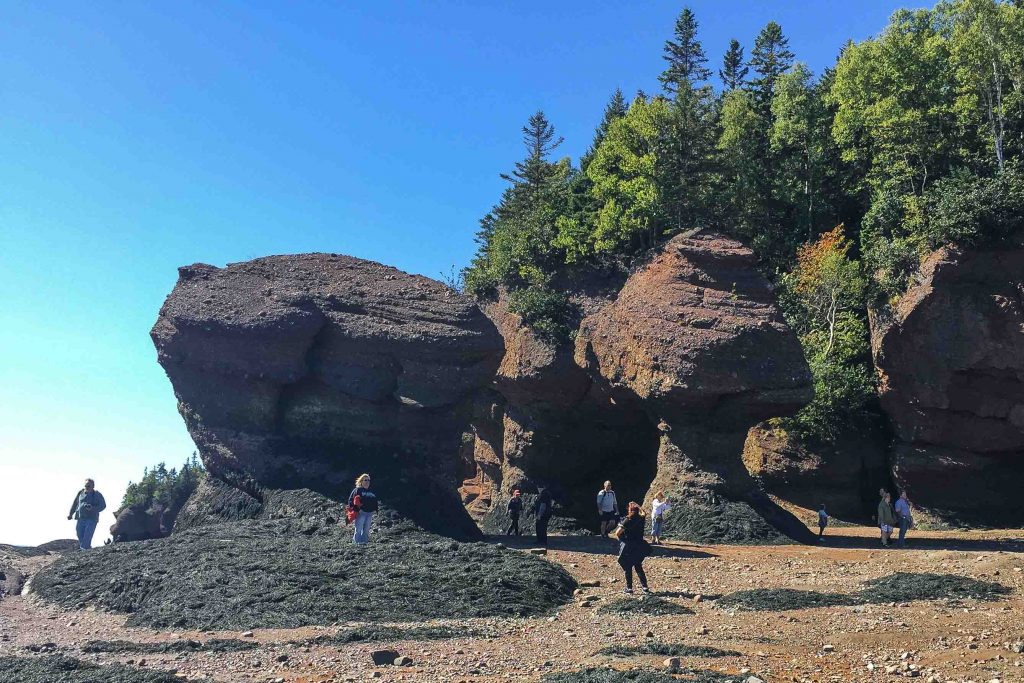 I have a bit of a love-hate relationship with national parks. On one hand, they have these astoundingly beautiful landscapes that have been protected from commercial development, so outdoor enthusiasts like myself can enjoy them in their natural state.

On the other hand, they’re often crowded, and while free from commercial development, the projects that park systems undertake to attract tourists (Fundy National Park Golf Course, really?) can make them seem artificial.

Fundy is no different, but I loved it because it has been spared some of this overdevelopment – and because of its small size and lack of crowds. It’s a place to escape and to explore, which is what national parks should be about.

What are your favorite Canadian national parks? 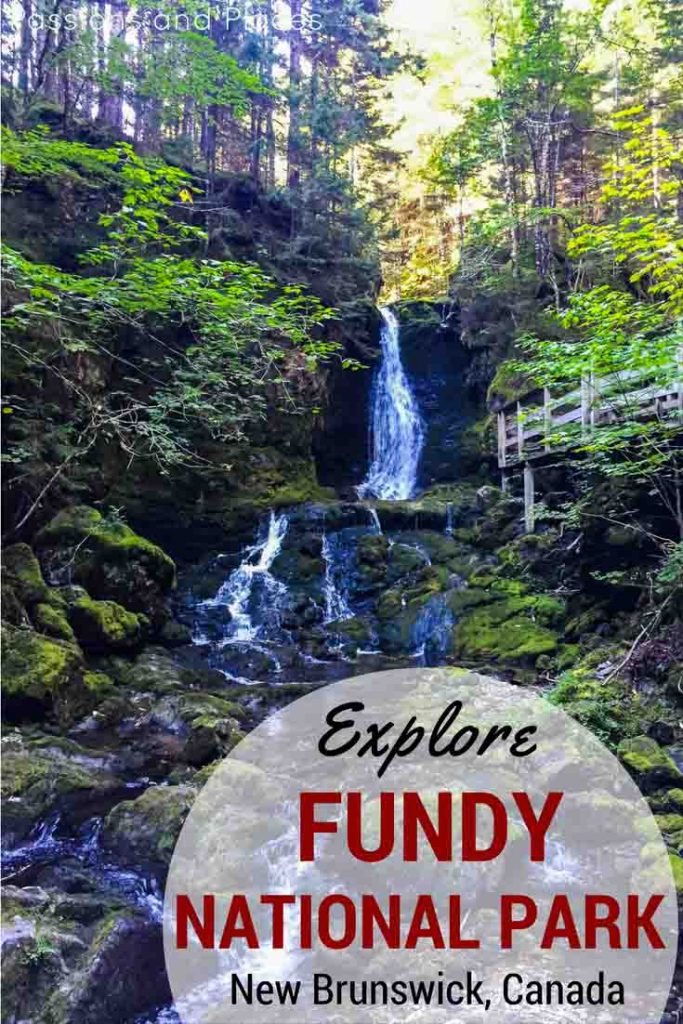 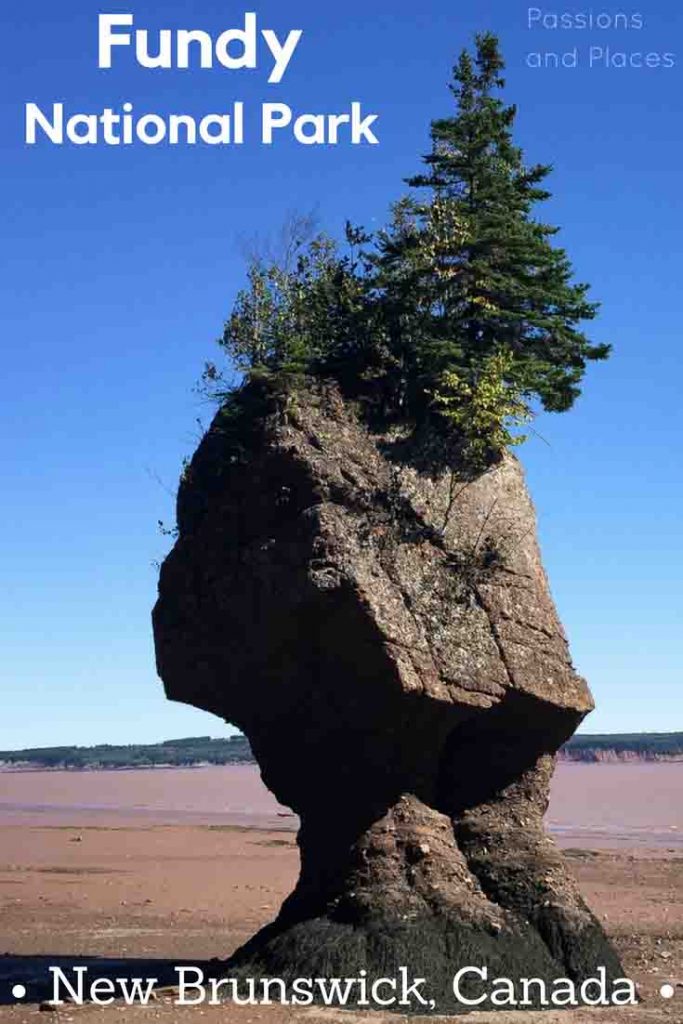