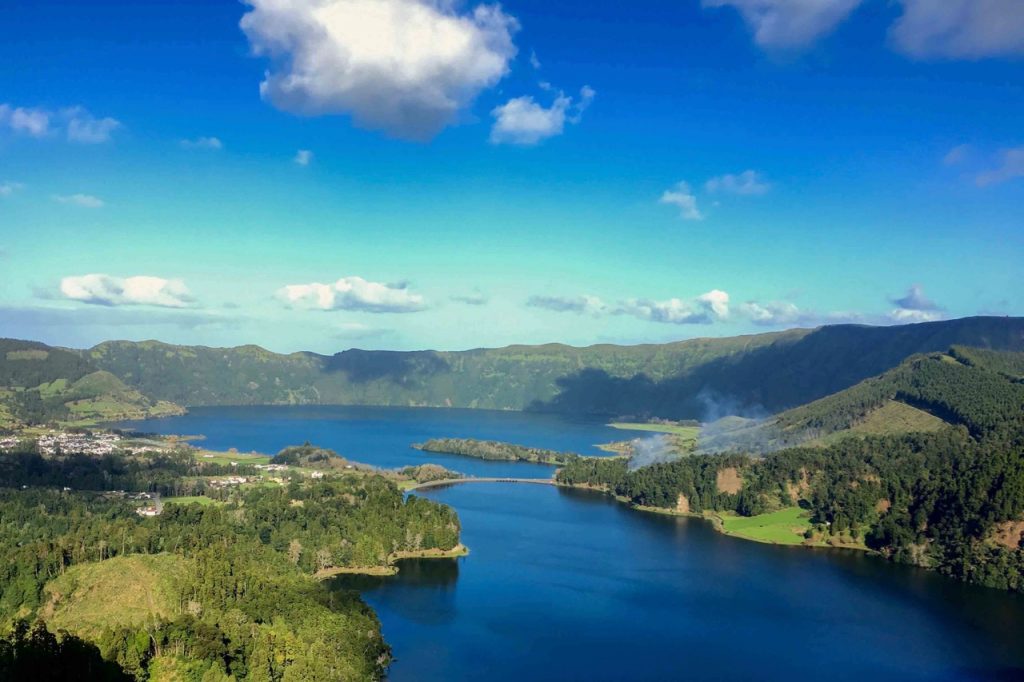 Why visit the Azores, a group of Portuguese islands in the Atlantic? Well, we knew we’d be heading to London for a wedding right after Christmas, and were searching for a place to spend the holiday that would be accessible from both London and our home in Boston, not too expensive, a bit off the beaten path, and at least somewhat warm. Turns out, the Azores met all our criteria.

But even if your trip choices aren’t being guided by a friend’s wedding location, these islands are still a more than worthy destination. So, how can you take your own trip there?

Getting to The Azores

Fortunately for budget travelers, several low-cost carriers fly to São Miguel. Azores Airlines, the islands’ flagship airline, offers year-round flights from Boston and Toronto, making the Azores one of the cheapest places for North Americans to fly to in Europe. Not surprisingly, multiple airlines also fly to the Azores to Lisbon and Porto, and Ryanair flies there from London as well.

Getting Around São Miguel

While it’s easy to wander the Azorean capital of Ponta Delgada and most of the other towns on foot, the options for traveling between them on public transportation aren’t great. São Miguel does have an inter-city bus system, but its schedule might not suit the needs of visitors who don’t have a lot of time to spare.

We don’t often rent a car while traveling, but it seemed like a good option for part of our trip in this case, especially since we were spending most of our time in a very rural area of the island. If you decide to rent your wheels too, the airport and the main road in Ponta Delgada have numerous car rental agencies, where you should be able to find something for $30 to $40 per day.

If getting from point A to point B is your only concern, a car will obviously get the job done. But if you’re looking for a bit more adventure along the way (and you have the training), you can rent a motorcycle from ANC instead. They have both scooters and full-sized motorcycles that can comfortably carry two people and a large backpack.

If you’re more interested in a human-powered vehicle, you can also rent a bicycle from Rent-A-Bike’s offices in Ponta Delgada or Lagoa. Be warned that cycling here is no joke, as the island is made up of steep volcanic hill. But if you’re an avid cyclist, you might love the winding mountain roads.

One word of caution: if you’re going to rent a motorcycle or bike, reserve it for a couple days and then extend the rental if you want to. The weather in the Azores is notoriously unpredictable and often very rainy and windy, making for less-than-desirable riding conditions, and the rental companies often don’t allow early returns.

Places to Stay in São Miguel

São Miguel has a wide variety of options for accommodations, and luckily, many are very inexpensive for their quality. Ponta Delgada has all of the standard offerings you’d expect in a small European city, mostly ranging from $50 to $100 per night.

If you want a more posh space to lay your head, Terra Nostra Garden Hotel in Furnas not only has amazing-looking rooms for about $200 per night, but also has a botanical garden and hot spring you can lounge in right outside (if you don’t mind the orange, iron-rich water staining your swimsuit). Even better, if you’re not interested in spending that kind of money on accommodations, the garden and hot springs are also open to the public.

If you want to stay in the center of the island, Pico Do Refugio also offers unique loft apartments for around $120 per night, which might appeal to those with a quirkier sense of style. And of course, there’s always Airbnb, usually our go-to option, where you can get private rooms for under $20, stay in a seaside cottage, or even spend the night in a windmill. 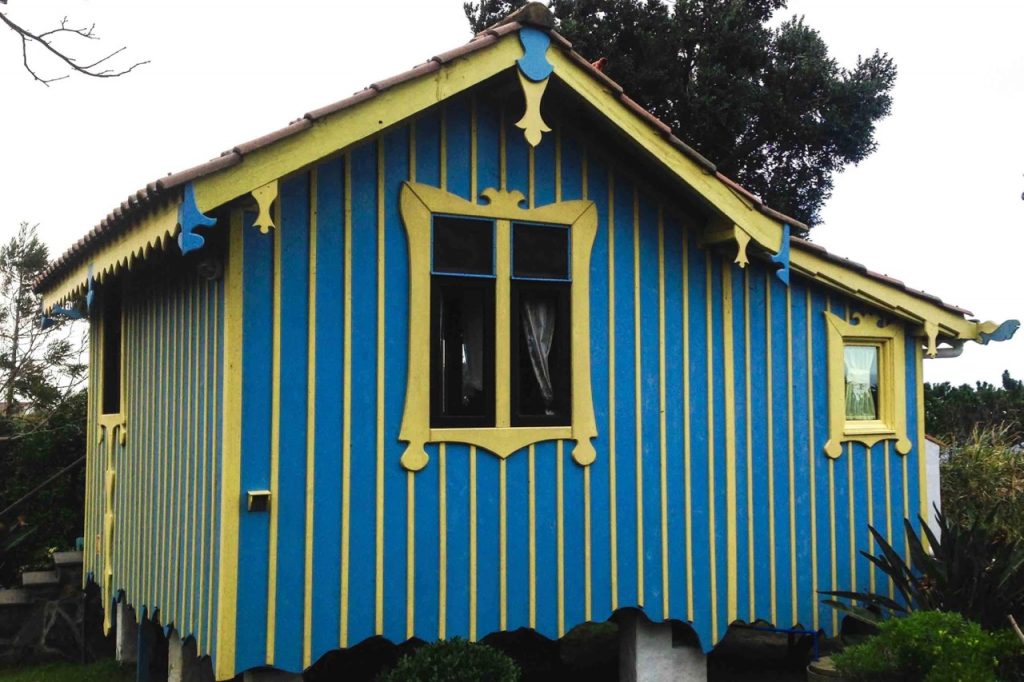 What to Eat in São Miguel

The cuisine of Portugal consists predominantly of meat and fish (along with some excellent cheeses), and the Azores are no exception; there aren’t many options for vegetarians. Ponta Delgada does have one dedicated vegetarian restaurant, Rotas – though as Jen pointed out, it was closed the whole time we were there, with no indication of when it would re-open.

For the most part, vegetarians either need to get used to salads (often with fresh cheese!) or rent a place with a kitchen. If you choose the latter, study up on some Azorean recipes, and prepare a local-flavored meal in your Airbnb, like this kale soup.

Things to Do in São Miguel

As most of the things we found to do on the island are outdoors, summer is the ideal to visit; but, if you bring a rain jacket and a positive attitude, winter in the Azores can be just as exciting.

The postcard-esque town of Sete Cidades sits in the bottom of a volcanic caldera and overlooks the twin blue and green lakes that have come to symbolize the Azores. There’s not too much to see in the town itself, but it’s a great jumping-off point for hiking in the volcanic area.

We started our hike at the town’s Church of São Nicolau, making our way along the edge of the lake and through the lush green valleys at the bottom of the mountain. Eventually, a fairly steep but manageable ascent took us to the rim of the caldera, where there’s a parking lot and, unexpectedly, an abandoned luxury hotel, Monte Palace (check out my photo essay on urban exploration of the hotel).

The rest of the hike is a fairly easy walk along the rim of the volcano, where you’re treated to a gorgeous 360-degree view, with the twin lakes on one side and the Atlantic Ocean on the other. We loved this route, and the island is full of excellent hiking options for all levels. 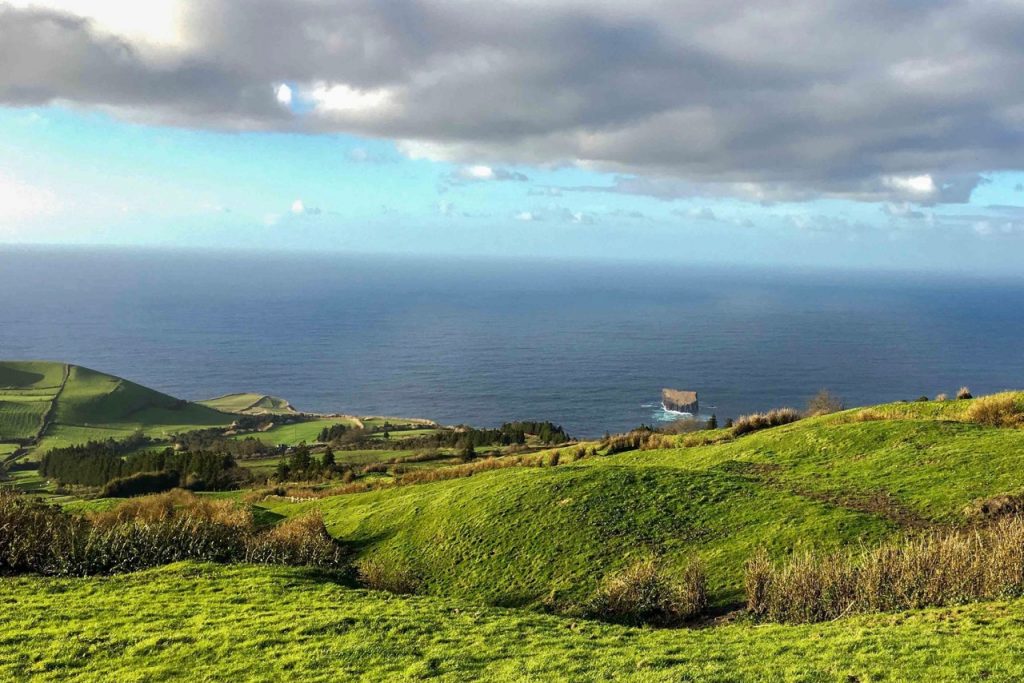 Check out a tea plantation.

The island of São Miguel has Europe’s only industrial tea plantations. At our Airbnb host’s recommendation, we visited Gorreana Tea Estate, just outside the town of Maia in the northern part of the island. We visited a little late in the day and unfortunately couldn’t take an official tour. But, we were able to wander around the factory looking at the machines, and also saw a few workers sorting tea leaves.

Afterward, we sat in the factory’s shop to enjoy an Azorean pastry and sample some free tea while we watched the sun setting over the tea fields outside. Before it got completely dark, though, we headed out into the fields for a short hike. Walking the steep, winding paths through the manicured tea hedges was a great end to our visit. 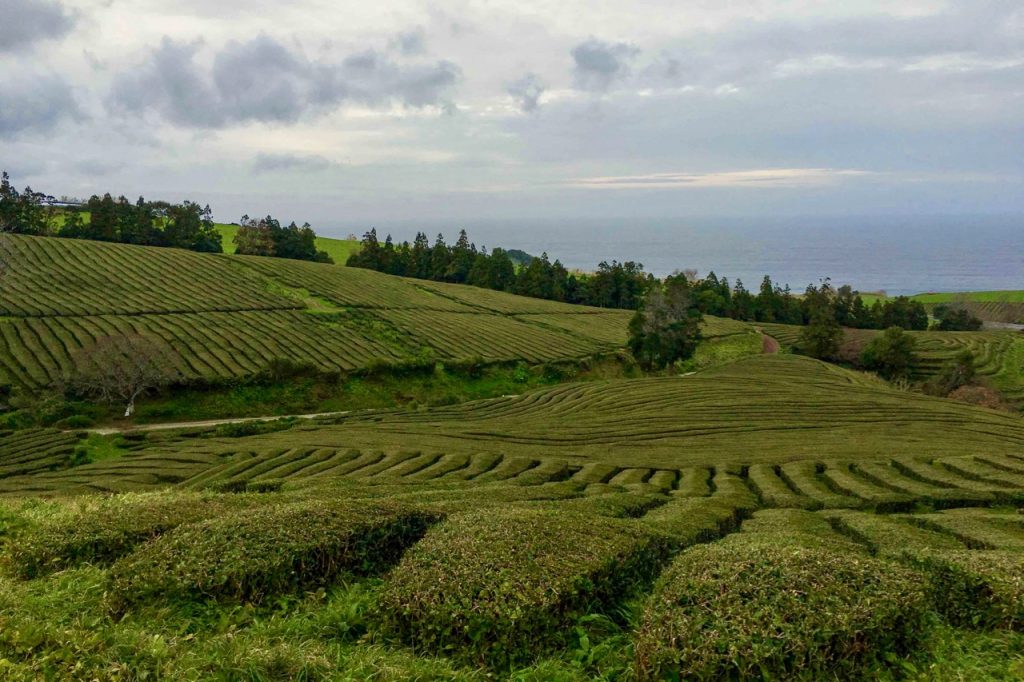 Watch the earth cook your food.

The Azores sit atop the Mid-Atlantic Ridge, where the North American and Eurasian plates are being pulled away from each other. The geological activity means a lot of heat right below the surface, creating hot springs and volcanoes – and providing local people with a free and rather unique method for cooking their food.

Along the shores of Lake Furnas, you can witness pots full of cozido, a Portuguese stew of meat and vegetables, being lowered into the ground, where they’re left to simmer for a few hours. Once it’s cooked, the stew is served at a number of restaurants in the area. I concluded that a vegetarian cozido could not be had, but it’s still worth it to watch the process. 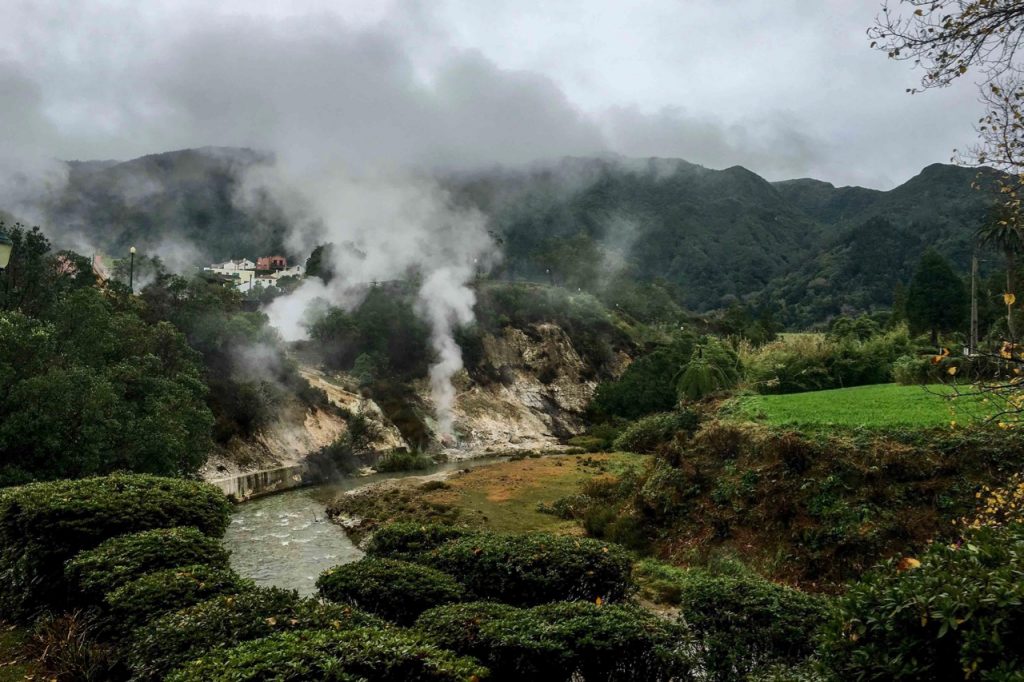 Wander the streets of Ponta Delgada.

There’s no better way to get to know a new town than just wandering its streets and noticing what daily life looks like there, so be sure to make time for exploring Ponta Delgada’s many nooks and crannies. 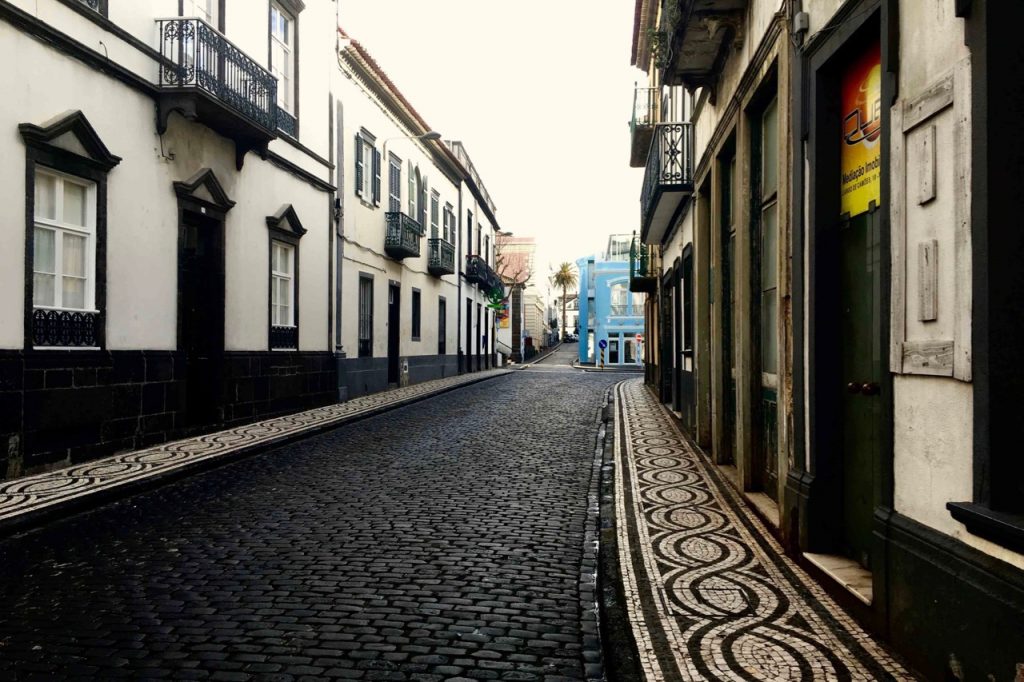 Once you’ve tired of walking, pick up a book from the town’s Microbiblioteca, a phone booth in the downtown plaza that’s been converted into a tiny library. Then, settle into one of the many cafés, and enjoy your book with a cup of espresso. As in any town, this is also the perfect way to spend the day if there’s a sudden rainstorm, which are not uncommon on the islands.

The Azores are an up-and-coming destination, but still relatively unknown and not too touristed. If you’re looking for a quiet place to relax combined with great hiking options and a few other fun activities, you just might want to consider a trip to these islands.

What are your favorite things to do in São Miguel, or on the other Azores islands? 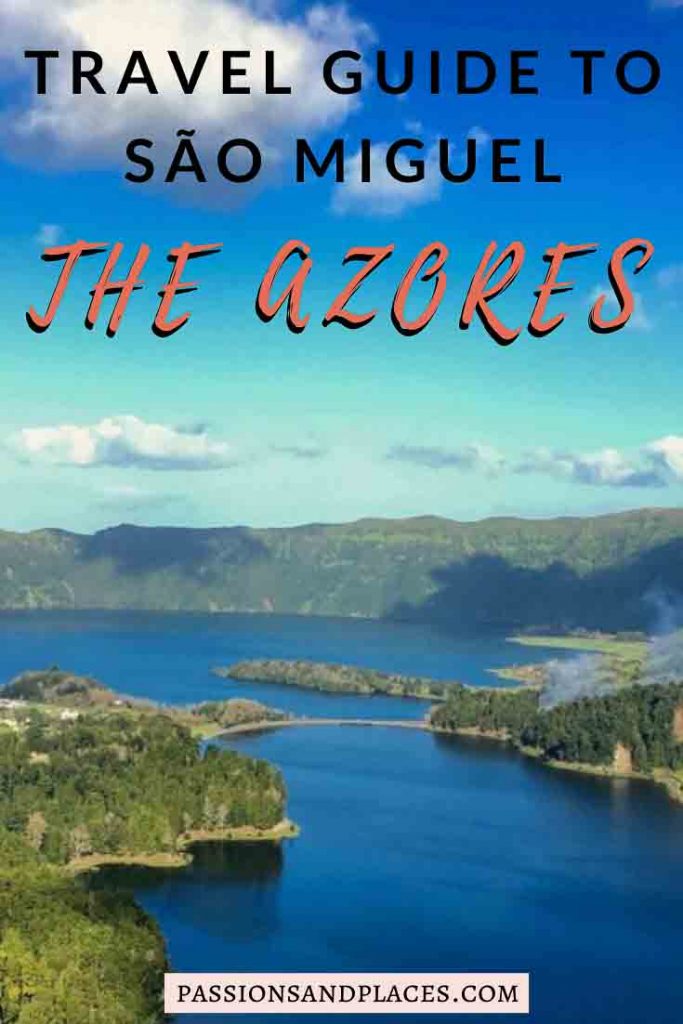 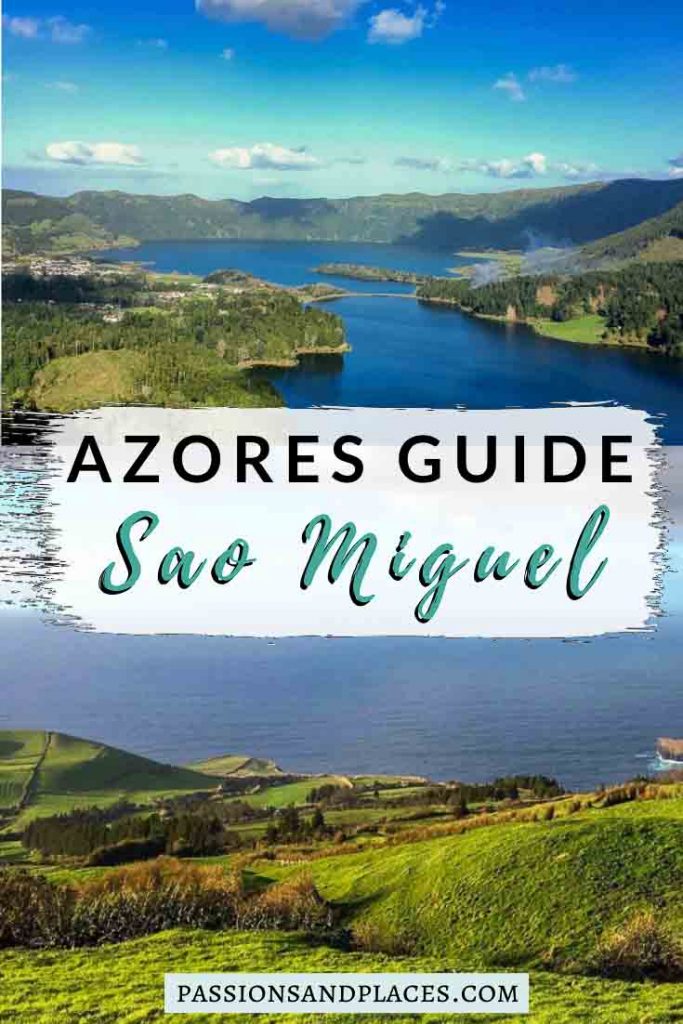