As you know if you follow us on Instagram, we recently got back from a holiday trip to the Azores. Before we started planning the trip, we knew very little about these islands. But between the research, daydreaming, and, you know, actual travel there, we got to learn a lot about a somewhat unknown destination. These are a few of the most interesting facts about the Azores. 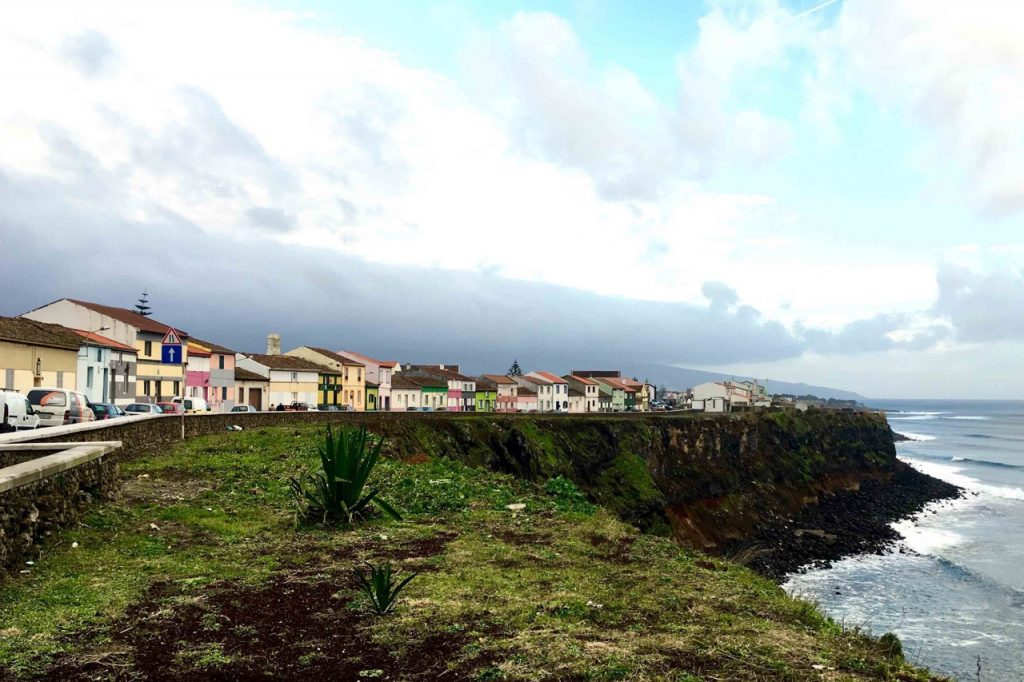 1. The Azores are part of Portugal.

That the Azores are part of Portugal may not be news to Europeans, but it probably will be to many Americans. The Região Autónoma dos Açores – or Autonomous Region of the Azores – is comprised of nine volcanic islands whose citizens speak Portuguese and use the Euro, but elect their own President and parliament (which can be dissolved by the President of Portugal).

While the Azores are subject to Portuguese laws, Azorean legislation overrides national law in “specific provisions of interest,” which include areas from environmental and resource issues to labor and public health to folklore and crafts. Another area where the Azorean government has the final say? Quality of life. Based on our experience, it seems like they’re doing a pretty decent job in that category.

2. The Iraq War started there (sort of).

This must be one of the most unexpected facts about the Azores. In mid-March 2003, President Bush, Tony Blair, and Spanish Prime Minister José María Aznar met on the Azorean island of Terceira, home to a U.S. Air Force base. Of course, the trio’s short meeting ended with their announcement that they were ready to go to war in Iraq, with or without UN approval.

3. There are loads of colorful buildings.

And they were one of my favorite things about the Azores. All over the island of São Miguel, many of the homes and apartments range from pastel to neon. And if a building itself isn’t colored, it just might have a picture of a flower painted on an exterior wall. 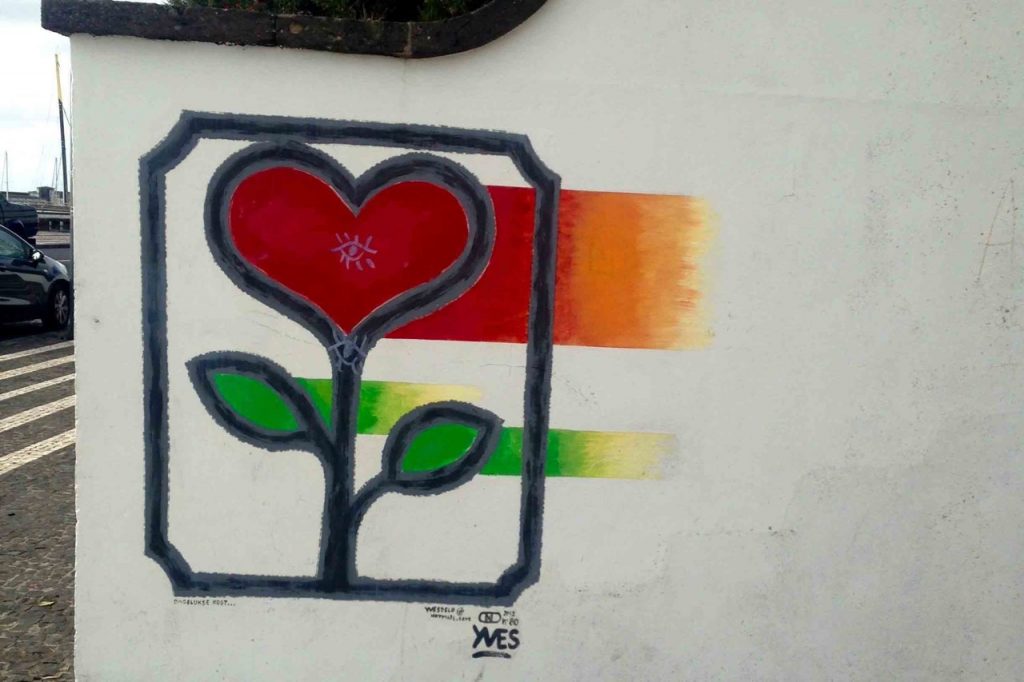 I first noticed the islands’ seeming abundance of bright colors when we were looking at Airbnb options and came across places like Casa Banana and Casinha. If you’re as into blue- and yellow-striped cabins as we are, the Azores are your place. 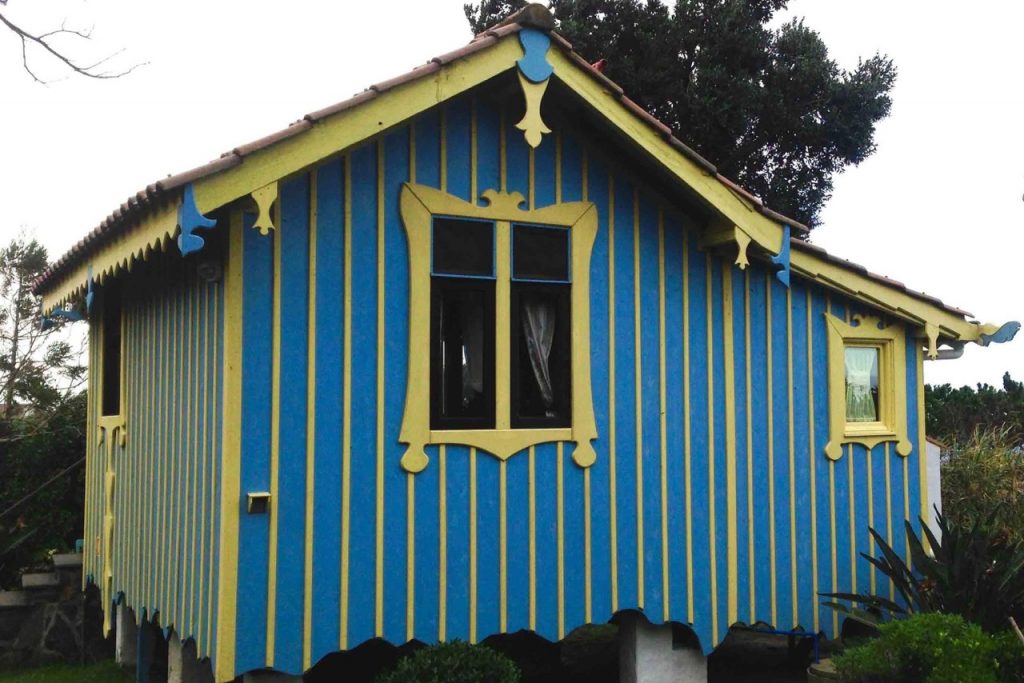 4. Reminders of Catholicism are everywhere.

As over 90% of Azoreans are Catholic, it’s no surprise that the center of each town seems to have a large church with bells that ring at least every hour. But more interesting were the pictures of Jesus, Mary, or patron saints built into the walls of many homes. 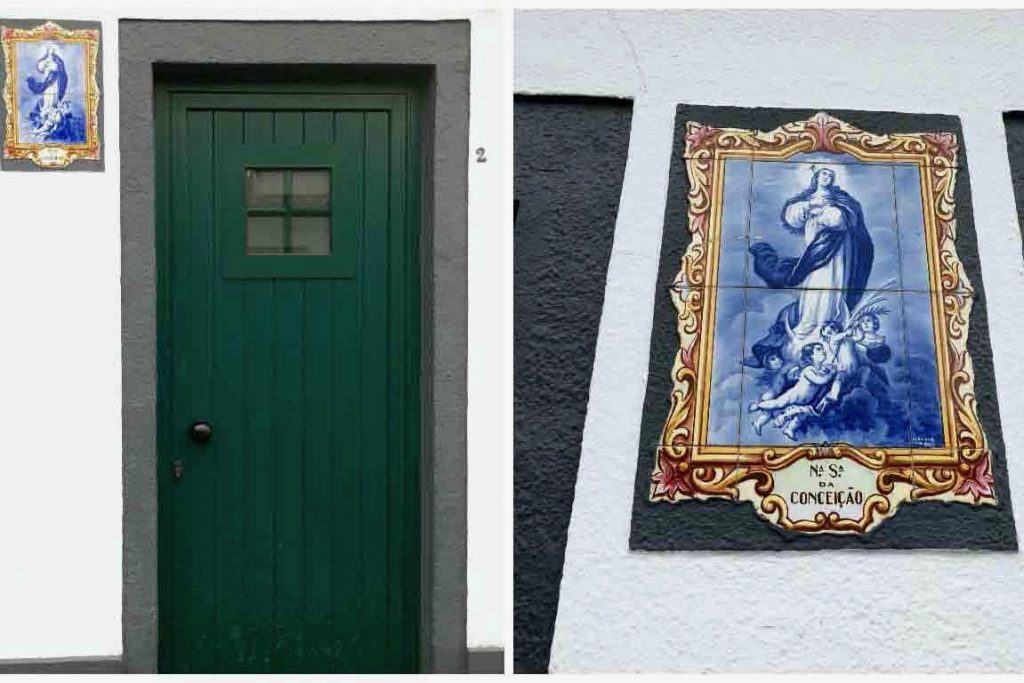 São Miguel has a handful of towns, but the rest of the island is mostly made up of farmland – and inhabited by cows, lots and lots of cows. 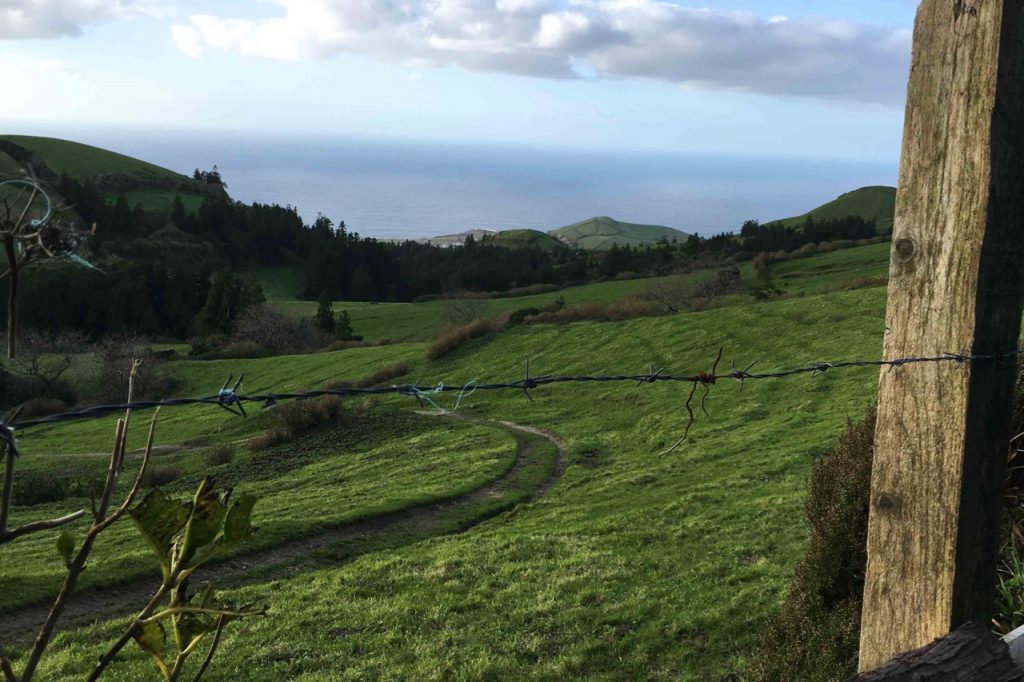 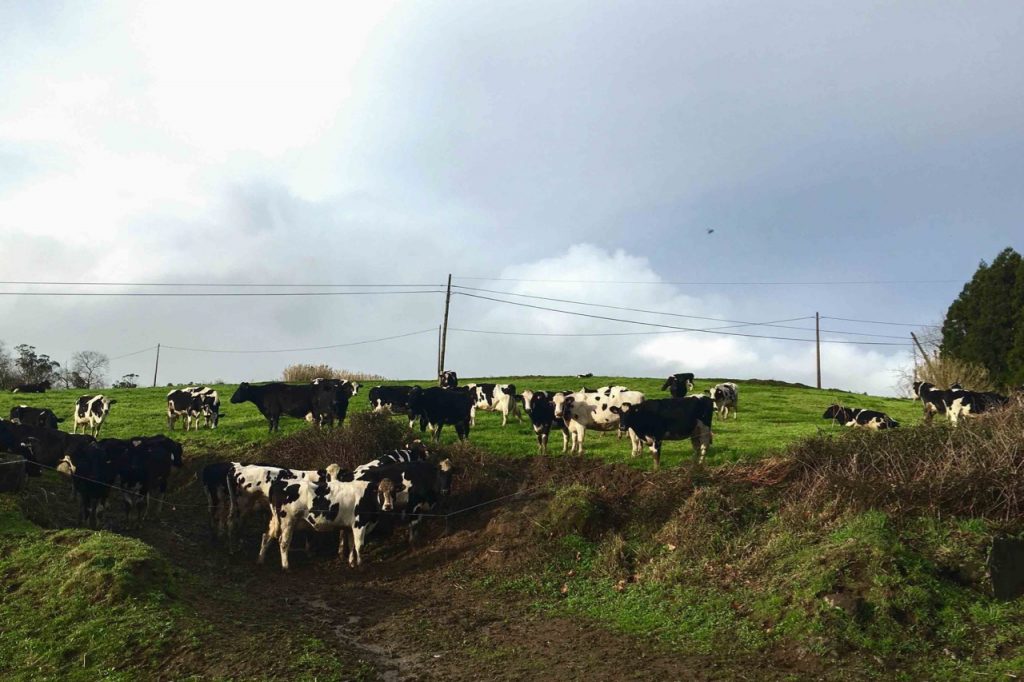 6. The Azores are known for cheese and wine production.

And with all those cows, we encountered cheese at every turn. There seemed to always be two types of cheese available: “fresh,” which somewhat resembles fresh mozzarella, and “São Jorges,” which is most akin to Gruyere.

Of course, the islands also produce the perfect complement to all that cheese – wine! Sadly, restaurants were often out of the local Azorean wines, offering up selections from mainland Portugal as a substitute. We still got to sample a couple local types, which made a solid complement to the cheeses, but weren’t anything to write home about. At least, not the reds or whites…

The first time I saw “vinho verde” featured on a restaurant menu in the Azores, I thought my romance language instincts were playing tricks on me. But no, green wine is real, although it has nothing to do with color nor eco-friendliness.

Green wine, at least in the sense of vinho verde, comes only from grapes in particular regions of Portugal, and it’s wine that is bottled shortly after harvest and meant to be drunk right away. In other words, green wine is young.

While I was (obviously?) skeptical of the green wine at first, it turned out to be my favorite of the local wines we tried. The greens we encountered could be likened to slightly fizzy whites, or very light champagnes. I’ll definitely be on the lookout for vinho verde, vin verd, vino verde, or even just “green wine” on future trips.

8. It’ll be difficult if you’re a vegetarian.

As a group of islands and part of a country known for meat-based cuisine, this comes as no surprise – but still warrants a warning to my fellow vegetarians. The majority of restaurant menus are divided into two sections: “Meat” and “Fish.” There are meat dishes and fish dishes, and that’s it.

If asked, many restaurants are willing to put together a salad, which is much appreciated, although it’ll likely be an underwhelming one. Some restaurants do offer vegetarian dishes, but they may also leave something to be desired. Like anywhere, sandwich places usually have a plain cheese option and maybe a veggie one, and pizza places are the same, making good (if not overly nutritious) bets for vegetarians.

I do have to mention the one vegetarian restaurant on São Miguel, Rotas, whose dishes sound amazing (and have fabulous reviews). Imagine my disappointment when we went by twice, and they were closed! The second time, someone from the yoga studio next door told us the restaurant was closed for remodeling. Hang up a sign (or better yet, post a Facebook update), people – all the vegetarian visitors to the Azores are counting on you! 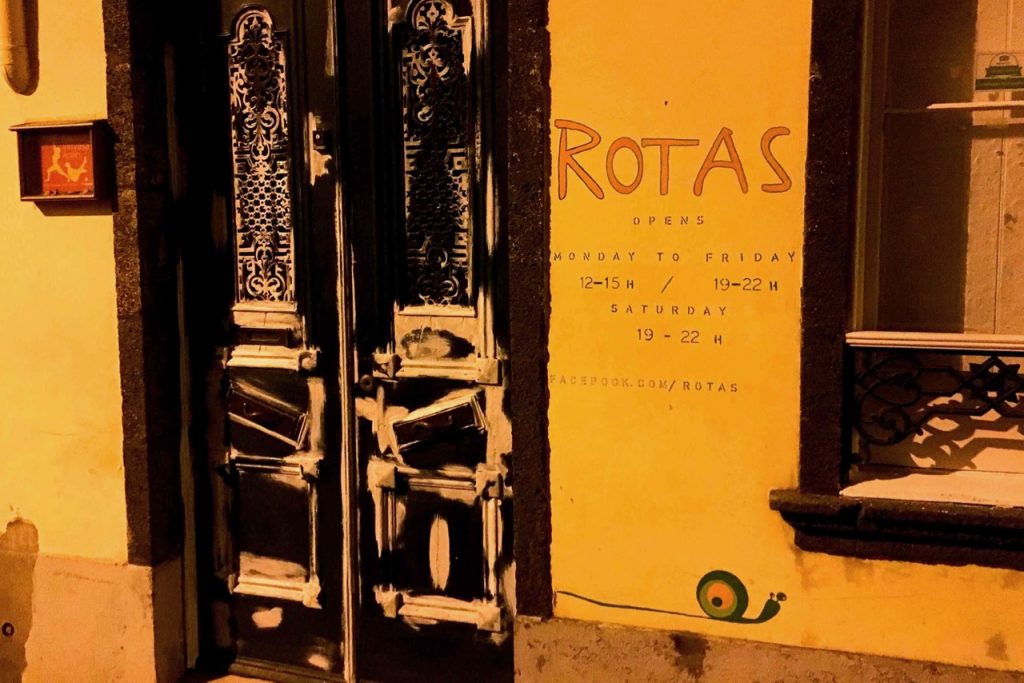 With Rotas being closed, I was happy to discover Arriba, a Mexican place in Ponta Delgada. Some TripAdvisor reviews complain that it’s not “authentic” Mexican, but with multiple vegetarian dishes and pretty tasty food, I was a happy camper. I’ll admit the service was very slow and not terribly friendly, but, hey, sometimes vegetarians can’t be choosers.

Menus at most of the restaurants we visited were written in both Portuguese and English, and nearly everyone we encountered in restaurants and grocery stores spoke English (and spoke it very well in most cases). The signs are generally only in Portuguese, but you can make some sense of them with knowledge of French or Spanish.

We did encounter a few people who spoke little to no English, and as always, it would have been really nice to be able to speak to them more. But for non-Portuguese speakers, the Azores can still easily be visited.

10. Visiting the Azores is affordable.

We were a little nervous about how a week in Europe would hit our budget, but for the most part, the Azores turned out to be surprisingly cheap, especially in comparison to mainland Europe. In fact, we questioned our restaurant bills more than once, certain that at least one item must have been left off.

We found appetizers for under five Euros and entrées for under ten, and I even ordered cheese toast for €0.80 at one café. And bottles of wine? Often six Euros or less at the grocery stores.

With the Euro currently at $1.16 to the U.S. dollar, the Azores is an especially good destination for Americans right now. And with five-hour flights direct from Boston on Azores Airlines – and the option to add a stopover on any trans-Atlantic trip – what’s stopping you? 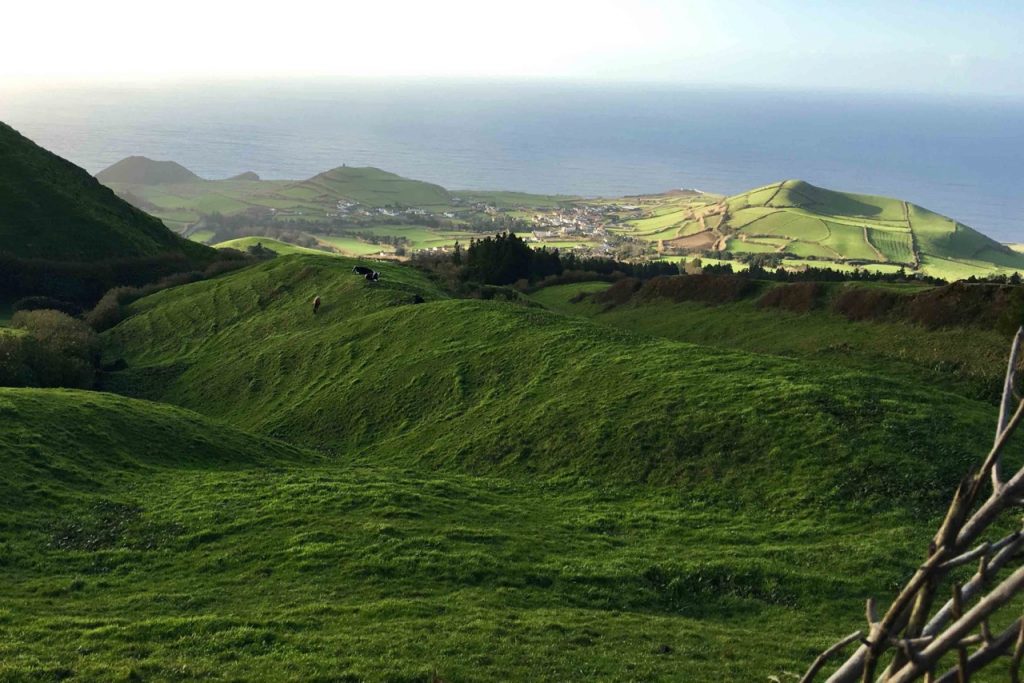 If you have questions about these Azores facts or planning a trip there, leave them in the comments! 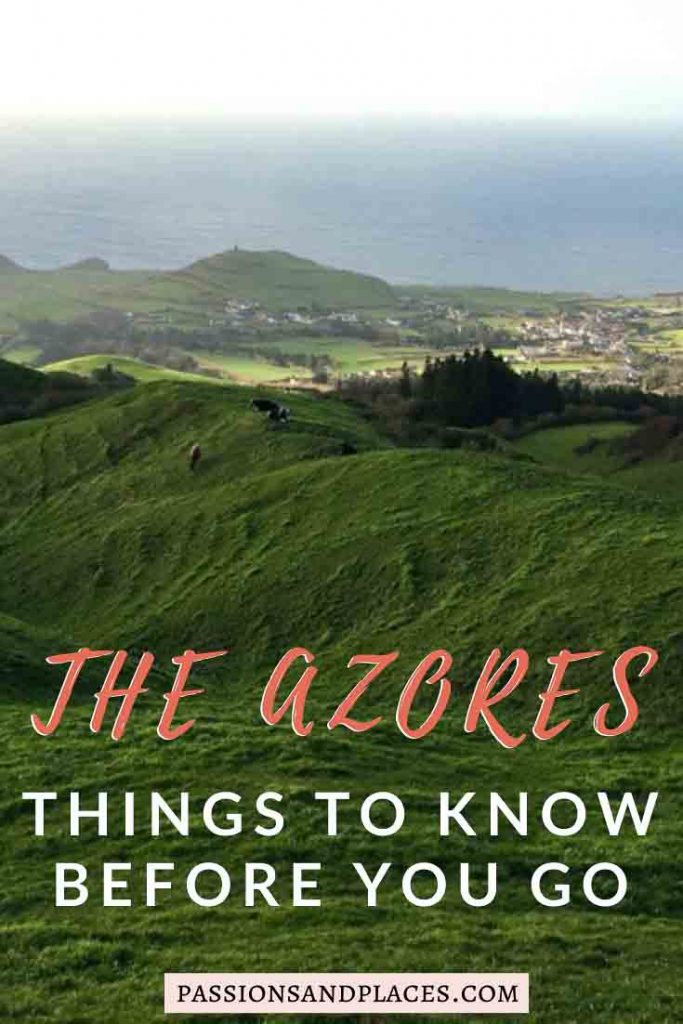 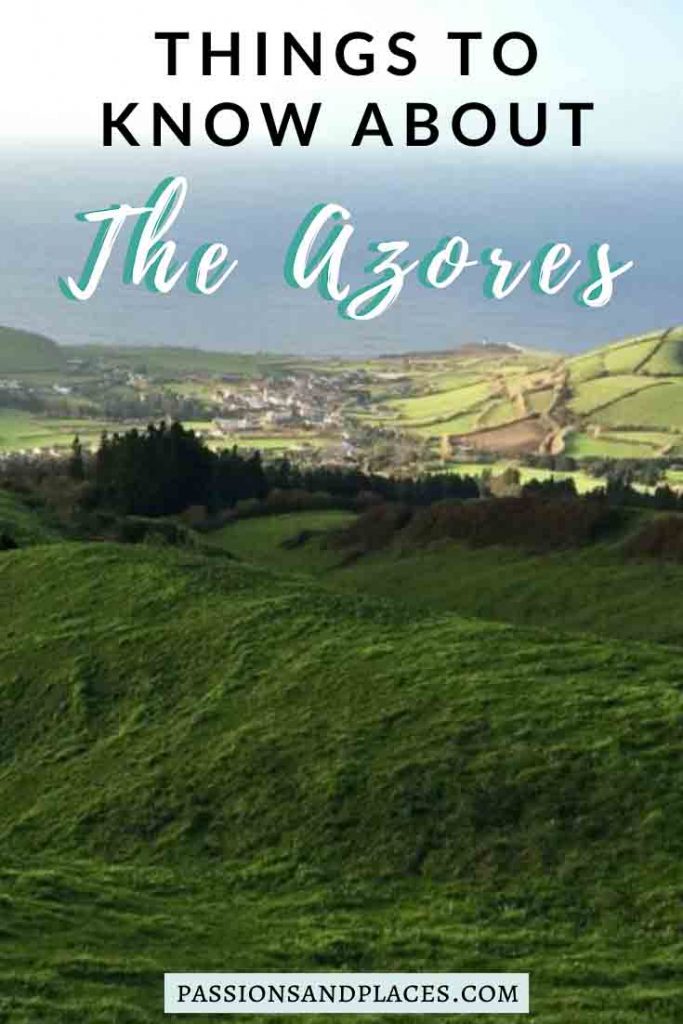 Note that we only visited São Miguel, so our experiences are not necessarily representative of the other eight islands that make up the Azores.