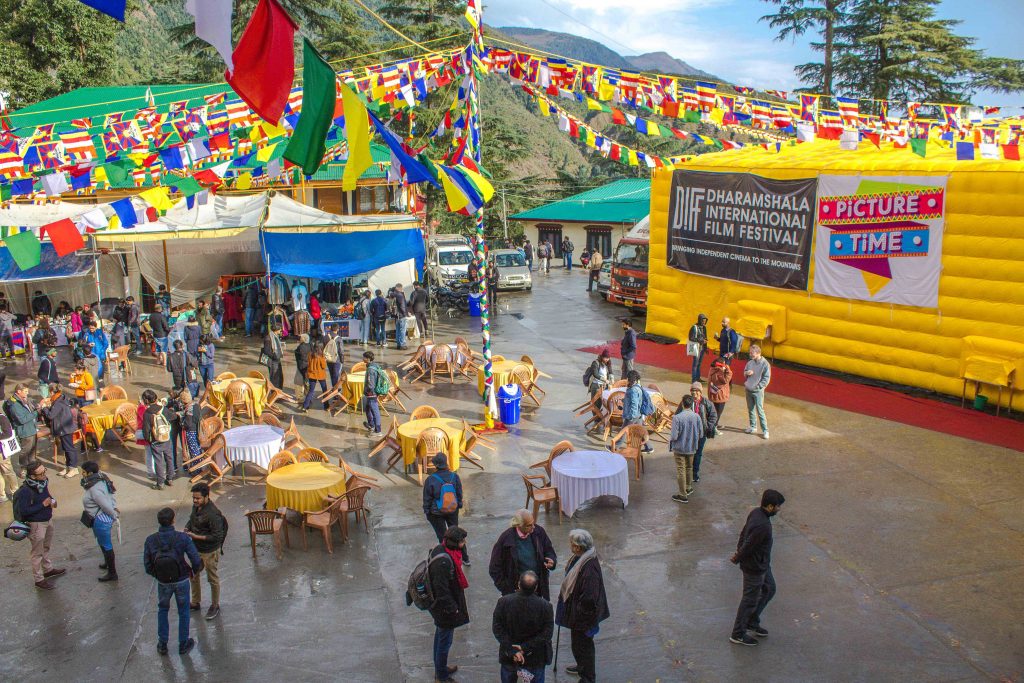 When we stumbled off the two-day boat trip from Thailand a couple years ago, one of the first things we noticed in Laos were signs advertising the Luang Prabang Film Festival. As it turned out, the festival was taking place during the exact dates we were going to be in Luang Prabang.

We had no idea what to expect, but it turned out to be SUCH a cool experience. The films were super interesting, and the town was buzzing with excitement.

So when we saw that the Dharamshala International Film Festival (DIFF) would be happening right after we arrived in India, we couldn’t believe our luck. And that’s how we came to spend last weekend high up in the Himalayas, watching film after indie film from India and around the world.

DIFF was founded by husband-and-wife filmmaking team, and long-time Dharamshala residents, Ritu Sarin and Tenzing Sonam, who wanted to give their community an alternative to commercial movies. Besides the founders, there’s a pretty big team behind the festival, including nearly 100 volunteers. While we noticed a few Westerners checking wristbands, it seemed like almost all of the people involved (and in attendance) were Indian and Tibetan.

The festival’s mission is “bringing independent cinema to the mountains,” and by that measure, I’d say it’s more than succeeded. 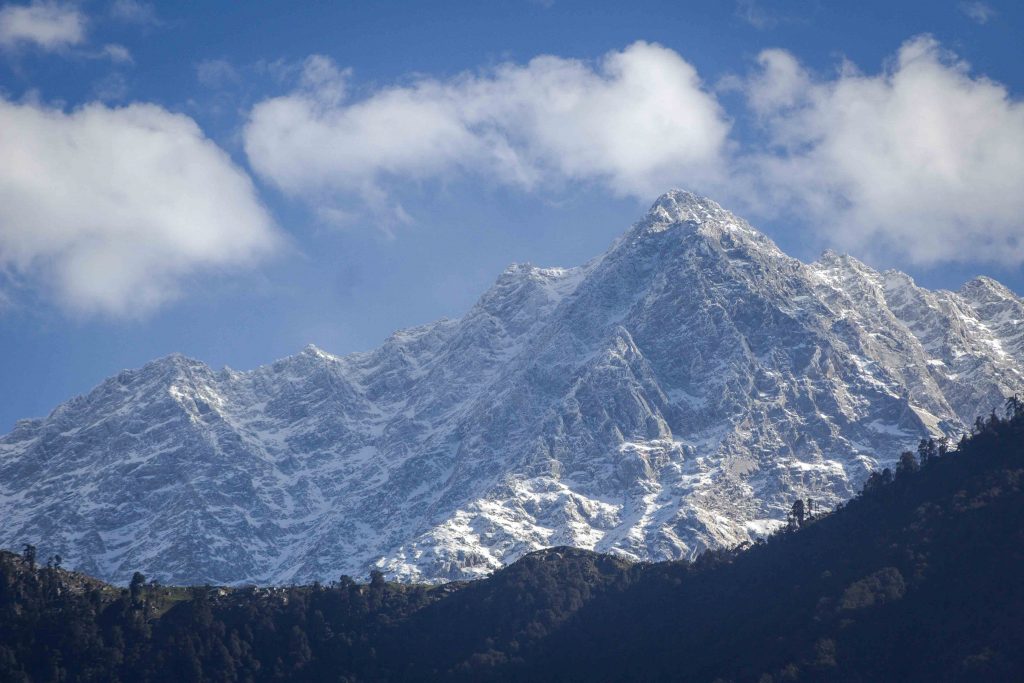 Why the mountains, though? Well, Dharamshala is a diverse community and a cultural and spiritual hub that’s beloved by visitors from other parts of India and from around the world.

For the past 60 years, it’s been the home of the Dalai Lama; when he was forced to flee Tibet in 1959, India welcomed him to Dharamshala. Thousands of Tibetan refugees have followed, and now the democratically-elected Tibetan government-in-exile is located there as well. 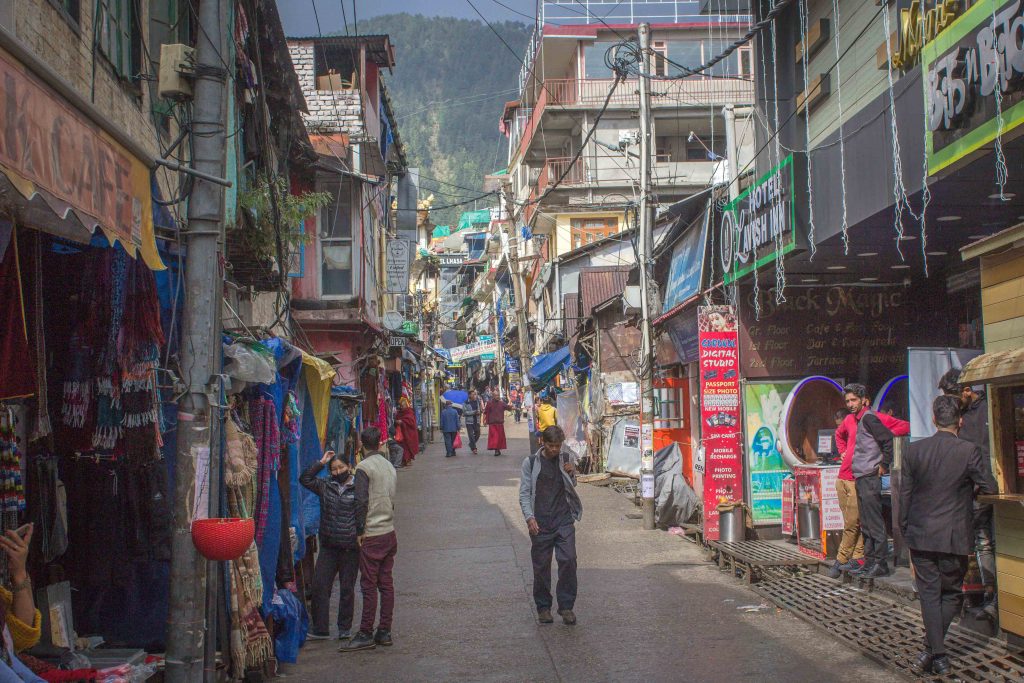 Today, Dharamshala is a mixed Indian and Tibetan – and Hindu, Buddhist, and Muslim – community, giving it a very different feel from most other parts of India. Thousands of people come every month to visit the Dalai Lama’s temple, and a huge industry of yoga, meditation, and other spirituality and wellness activities has sprung up in the surrounding area.

The film festival has used a couple different venues in McLeod Ganj, the small town people are usually referring to when they say “Dharamshala” – it’s located just up the hill from Dharamshala proper. This year, DIFF was held at the Tibetan Institute for Performing Arts (TIPA), which is a steep but gorgeous walk uphill from town. 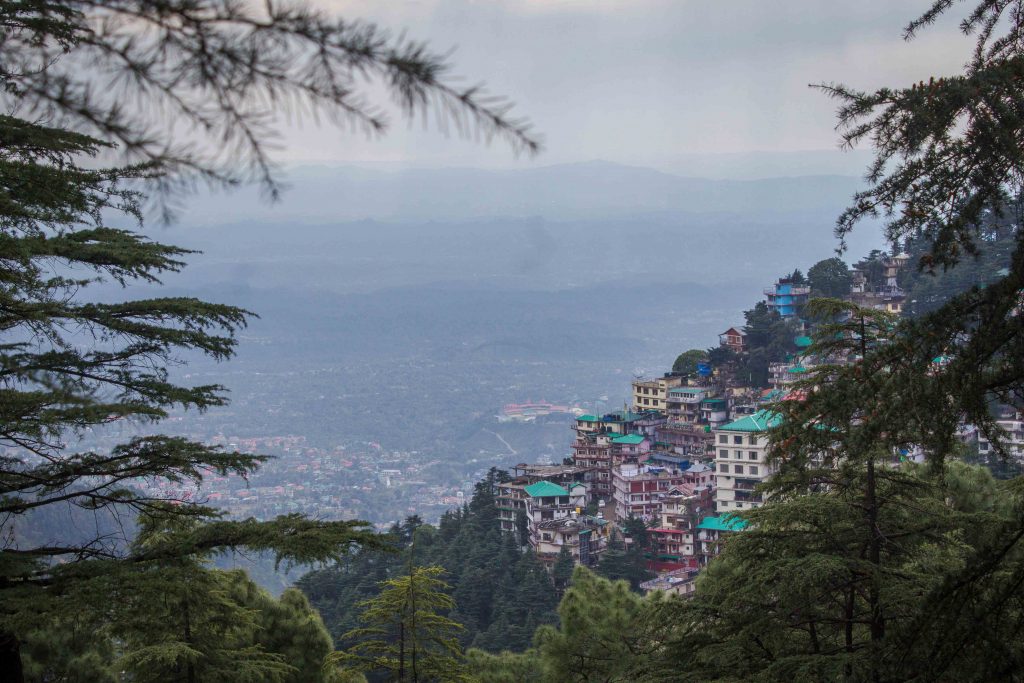 In addition to the brand new theatre at TIPA, which had been inaugurated just in time for the festival’s opening night, there was also a huge inflatable theater set up outside, which felt a little like watching a movie inside a giant bouncy house.

There were also a dozen or so vendors serving food and selling all kinds of goods. We picked up a wool sheep Christmas tree ornament from one of them (ornaments are basically the only souvenirs we ever buy, and we try to get at least one in each country we visit), and had some tasty coffee, pastries, and momos. I was really happy to see that almost none of the vendors were using any plastic. 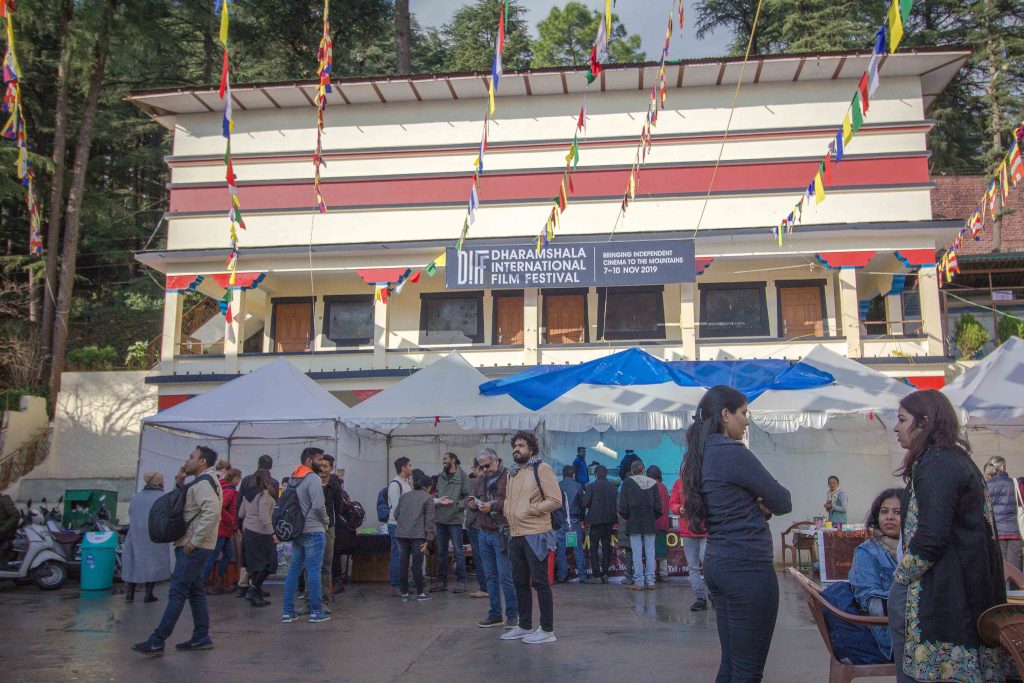 Films Screened at the 2019 Festival

DIFF screens only independent films, both documentaries and narratives, and they come from all over India and around the world. This year, about a third of the 25 feature-length films (and most of the 30 or so short films) were from India, with others coming from Portugal, Macedonia, Iran, Peru, Japan, Cambodia, and elsewhere.

That meant films were shown in over 20 languages, including at least six different Indian languages, but all had English sub-titles. English is widely spoken in India, and often used as a lingua franca among people from different parts of the country. While English sub-titles are usually written with a Western audience in mind, the sub-titles on the Indian films we saw were written in the distinctive dialect that’s spoken in India, which felt like it gave them another layer of authenticity. 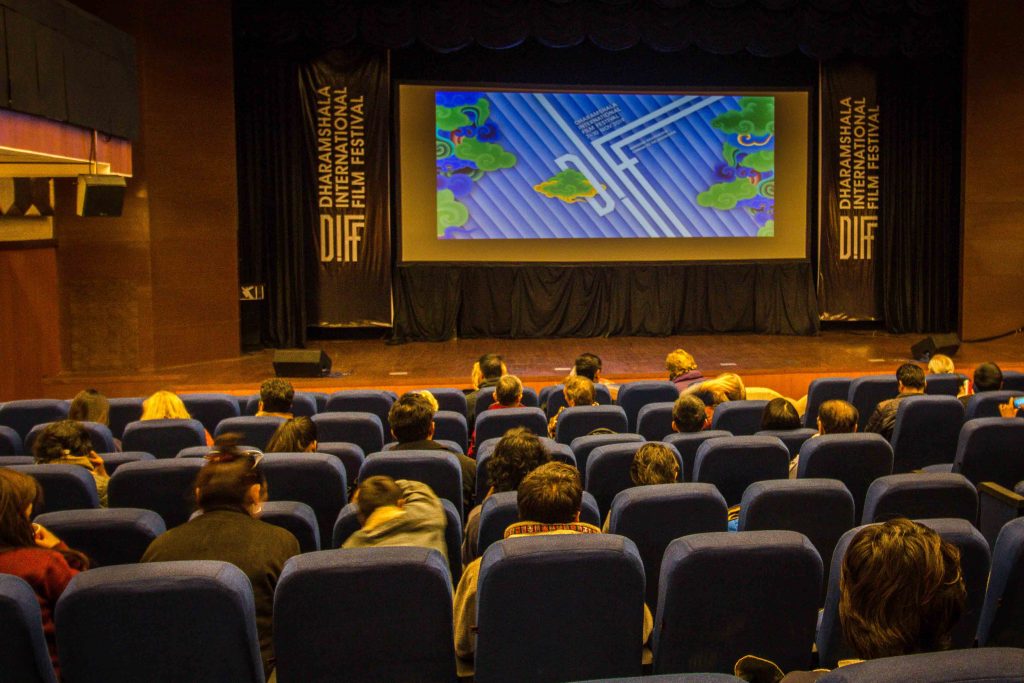 Unlike many festivals, there are no awards at DIFF, which touts itself as a celebration of film instead of a competition. One award was given this year, though, for the first time: the Gender Sensitivity Award. It went to Yeh Freedom Life, a film set in Delhi, selected for breaking “stunning new ground in capturing and portraying identity, gender, and sexuality beyond the heteronormative.”

And while the festival may not have reached gender parity, I was impressed that over a third of the feature-length films screened were directed by women.

The Films We Saw

Chosen as the festival’s opening film, Eeb Allay Ooo! is a satirical story, but in many ways, it’s also a realistic portrayal of daily life for many of Delhi’s residents. The movie’s main character comes to the city from a rural area, and gets a job at a high-level government office – as a “monkey repeller.”

Yes, his entire job is to scare away the monkeys who hang around government buildings and officials’ residences in an upscale part of the city (and he more or less loses his dignity doing so). Apparently, this is a real job in Delhi – and one of the actors in the film is a monkey repeller in real life!

For Sama, which won Best Documentary at the Cannes Film Festival this year, was the most powerful of the films we saw – and definitely the hardest to watch. Syrian filmmaker Waad al-Kateab taught herself to film during the siege on Aleppo, while her husband was running what would become the city’s last functioning hospital.

They chose to stay in Aleppo with their newborn daughter until the very end, treating the injured and documenting the atrocities. The film portrays the unimaginable effects of war and also paints a realistic picture of daily life under attack. Everyone should see it.

This was another of my favorite films from the festival, and it was fitting, since we got to see the Dalai Lama teach in person just a couple days before. The film documents his (perhaps surprising?) commitment to science and technology and his collaborations with physicists, chemists, psychologists, and other researchers from Europe and the U.S.

It also points out the many parallels between Western science and Buddhist thought, as well as the scientific evidence for mindfulness and meditation. And if you’ve never seen the Dalai Lama speak, you’re in for a treat.

This was another fitting movie to see at DIFF since it was filmed in Bir, just down the road from Dharamshala, and portrays life in a small mountain town in Himachal Pradesh. It tells the story of a young boy who works in a café as he considers moving to the city to look for a job or returning to his home village to become a carpenter like his father.

The filmmaker spoke after the screening, and we got to hear all about its making. It’s an indie movie to a T: the director lived in Bir for three years and operated a café, most of the scenes were shot in one take, and the people in the film aren’t professional actors, but are residents of the village playing themselves.

When we saw there was a movie about dogs on the festival’s schedule, seeing it immediately became our top priority for the weekend. Pariah Dog is about the street dogs that are ubiquitous in Kolkata (and elsewhere in India) and some of the eccentric people who watch over them for no reward. It was sweet, sad, and occasionally very difficult to watch.

The film even won Best Documentary at our home state’s Big Sky Documentary Film Festival – and in a dog-loving town like Missoula, we aren’t surprised.

We were originally drawn to Tehran: City of Love by the poster, which shows a woman sitting on a bench with a human-sized teddy bear, and the film was just as humorous and absurd as we’d hoped.

It follows the intertwining stories of three people in Iran’s capital: a woman who works at a plastic surgery clinic and catfishes the clinic’s male patients, a personal trainer who’s secretly attracted to his male client, and an “expert mourner” who gets arrested for singing at an illegal private wedding. But it also reveals a lot about daily life in Tehran and about how conservative cultural norms and an oppressive government affect people’s lives and relationships.

Another Day of Life

An animated documentary, the final film we saw at DIFF was totally different from the others. Another Day of Life is based on a memoir by legendary Polish journalist Ryszard Kapuściński, which details his experience covering the Angolan Civil War in the 1970s. Maybe animation is a surprising medium for this kind of story, but it made for a really unique and memorable movie.

It tells of Angola’s fight for independence, the devastation of the war, and the influence of international actors who got involved for their own purposes, as well as the role of journalists during conflict. Interspersing the animation are recent interviews with the real-life characters from the story, who share their experiences and reflect on the war decades after the fact.

We also saw a handful of short narratives, ranging from about five to thirty minutes long, and I was surprised by how well they developed the storylines and characters in such a short amount of time.

My favorite of the ones we saw was called Laddoo, told from the point of view of an extremely curious little boy. It’s a sweet and funny take on similarities between Hinduism and Islam (and all religions), artificial barriers among people, and coexistence in a diverse society like India. It’s 12 minutes long, and you can watch the whole thing here.

We really enjoyed all the movies we watched last weekend, and there were plenty of others that looked great, too. These are a few more we’d have gone to if we’d had time:

Screwdriver, about the horror a Palestinian teenager goes through while imprisoned by Israeli forces for 15 years

Aise Hee (“Just Like That”), about an older Indian woman who bucks all norms and expectations after becoming a widow

About Love, the story of three generations of family members living together in Mumbai and their relationships with one another

Bombay Rose, an animated love story about a dancer who works at an illegal nightclub in Mumbai and a Muslim man whose parents were killed by the military in Kashmir 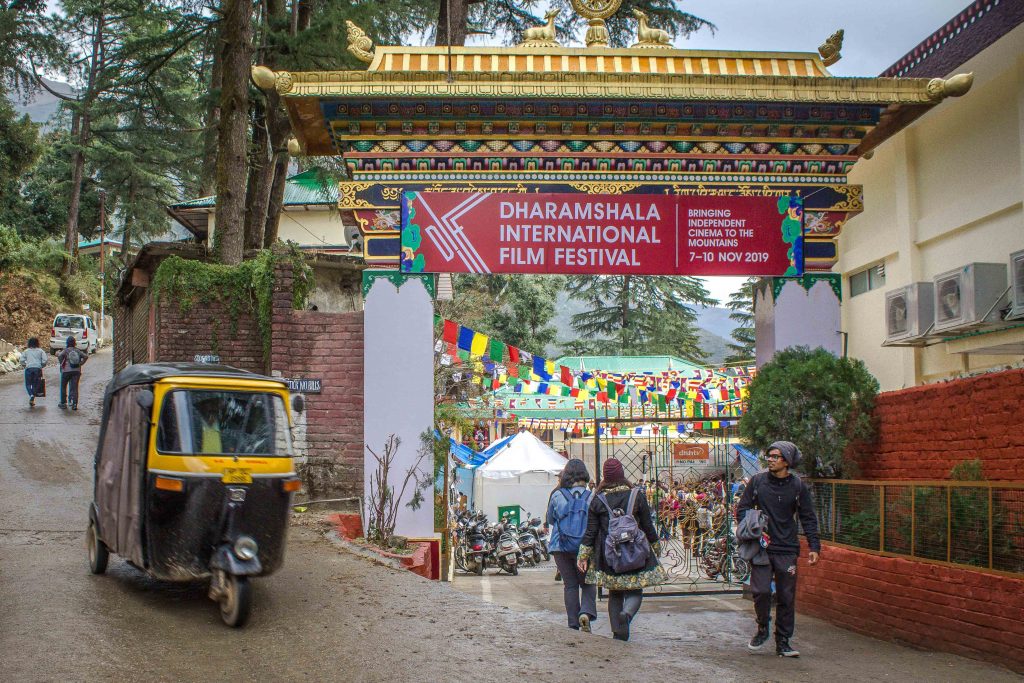 The Dharamshala film festival was our second one, but I’m betting it won’t be our last. In our experience, film festivals have been a really cool way to participate in a local cultural experience and watch films that teach us about life in other places.

We also love them for many of the same reasons we love small businesses: they’re a platform for something unique and innovative, they provide alternatives to anything corporate or mainstream, and they’re a way to support the little guys.

Have you been to any film festivals? Tell us about it in the comments! 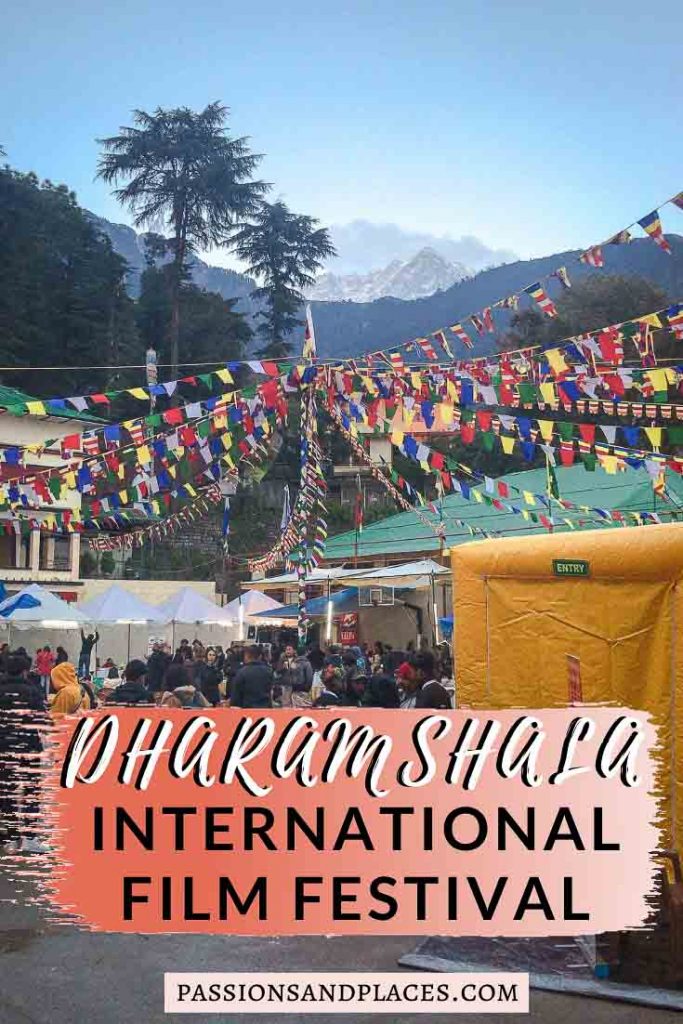 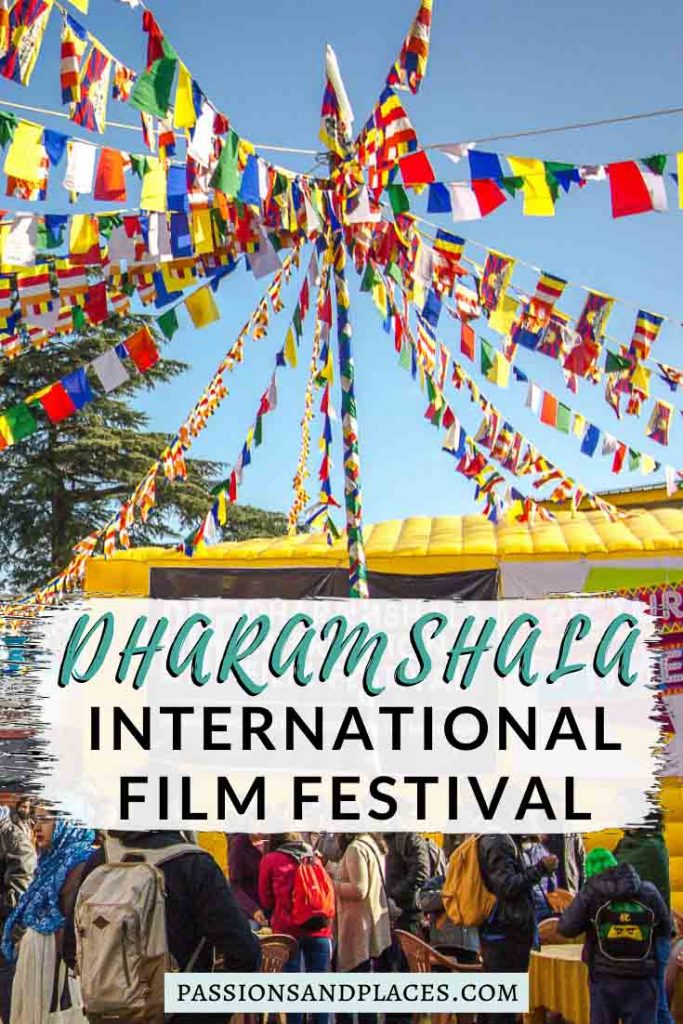