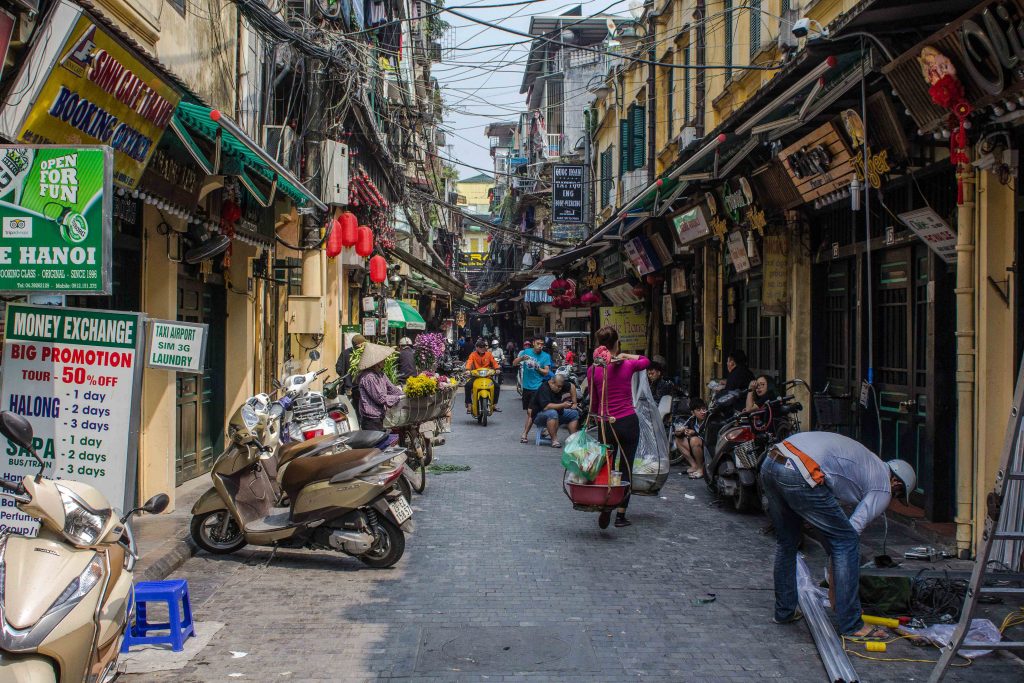 The Hanoi Old Quarter, with its picturesque French colonial architecture and plethora of street food, is one of the most popular destinations in Vietnam. This neighborhood is a maze of narrow winding streets with hoards of motorbikes driving on the sidewalks, weaving in between cars, and generally occupying every last inch of open space.

It’s the sort of place where just wandering around is a captivating experience if you’re willing to brave the mayhem. But it might be even better explored with a guide, who can point out the beauty amid the chaos and give context to the many fascinating sights.

Enter Hanoi Free Walking Tours, a non-profit organization founded in 2012 by a group of local university students who wanted to improve their English and share the rich history of Vietnam’s capital.

The organization has trained hundreds of volunteer student guides to lead tours of Hanoi and act as cultural ambassadors to visitors from over eighty countries. The guides get a chance to practice their English and their speaking skills, and visitors get to learn all about the city. These walking tours must be some of the best in Southeast Asia, and as the name suggests, they’re completely free!

Hanoi Free Walking Tours now offers several different tours, including one through the key war sites, one of the French Quarter, and a food tour. They range in length from a few hours to a full day, and all of them sound amazing, but I eventually settled on the half-day Hanoi Old Quarter Tour.

The tours include free pick-up from hotels inside the Hanoi Old Quarter, but since we were staying right by the organization’s office, I just walked over to meet up with the group. As it turned out, the only other people on my tour were a young couple from Argentina. The office was so small, though, I don’t think it could have fit any more than the three of us.

As soon as I arrived, our very cheerful leader introduced herself and hurried us off in the direction of our first stop. The online description of the tour was a little light on details, so I really had no idea what to expect until she led us into the Old Quarter’s bustling streets. 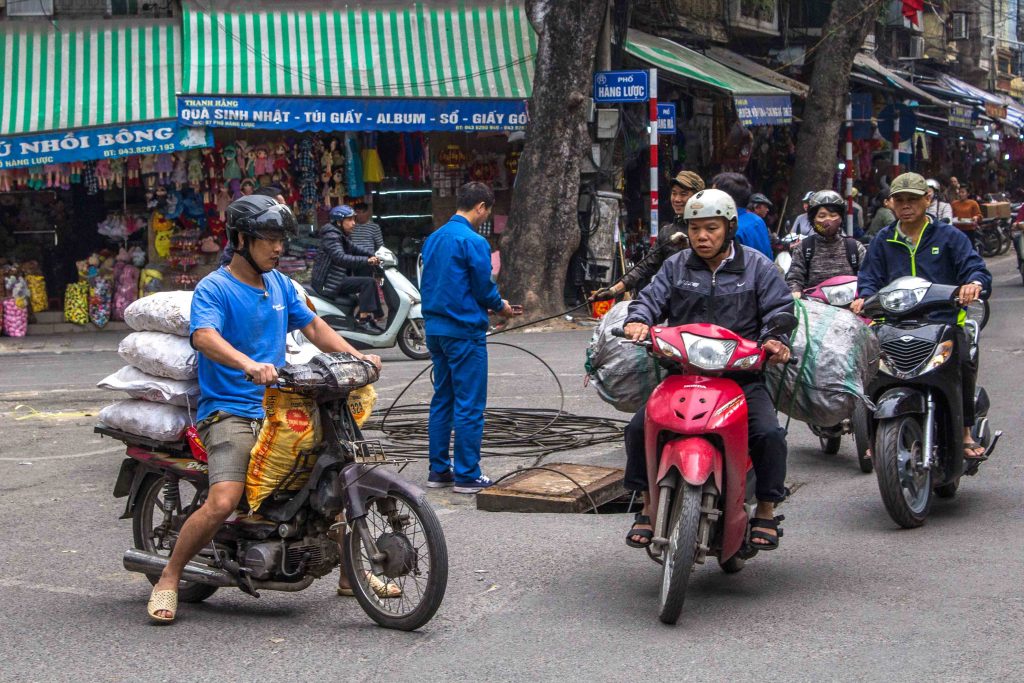 After ten minutes or so of dodging motorbikes, we came upon one of the most famous areas of the Old Quarter: the Guild Streets, a collection of over 70 avenues, each representing a single type of product or service sold by its residents.

The highly structured layout is the result of hundreds of years of migration, during which people from the same rural villages would take up residence on the same street and find employment together at the neighborhood workshop. Today, you can find whole streets devoted to such specific items as bamboo rafts, silk dresses, and brass doorknobs.

One of the most curious avenues was one my guide referred to as “Death Street,” the go-to place for everything necessary for putting on a first-rate funeral. The shops don’t sell tombstones and caskets, though. Instead, they’re filled with smartphones, iPads, elegant dresses, sports cars, all the luxury goods your heart could desire – all made from paper. These paper models, along with stacks of fake money, are burned during the funeral as a way of sending ancestors into the afterlife with all the material things they might need. 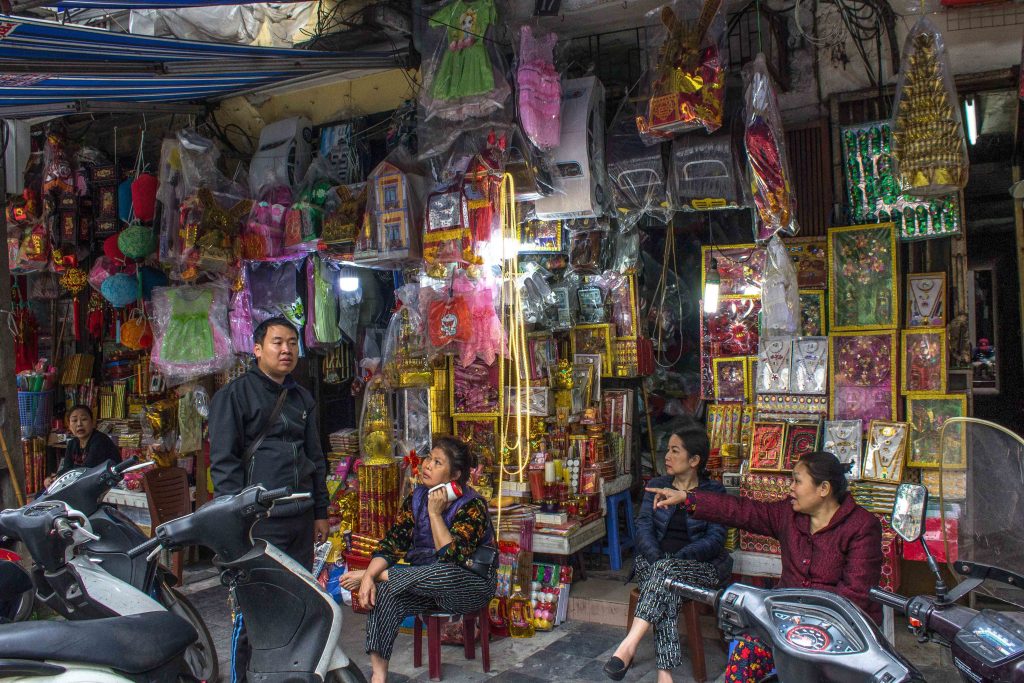 The shops on the Guild Streets have an unusual look to them; most are only about ten feet wide but extend over sixty feet back. When the streets were being laid out hundreds of years ago, taxes were collected based on the width of the storefront, so it only made sense to have the narrowest possible opening on the street.

The next stop on our tour was Đồng Xuân Market, the largest covered market in the city, which has been one of Hanoi’s busiest shopping centers ever since it was built in the late-1800s. Unlike most Southeast Asian markets I’ve visited, Đồng Xuân is quite fancy and even had some escalators to give it a mall vibe.

Everything from winter coats to counterfeit sunglasses to high-end TVs can be found here. As a tourist, it seems impossible to find what you’re looking for, but there’s clearly a logic to its layout. 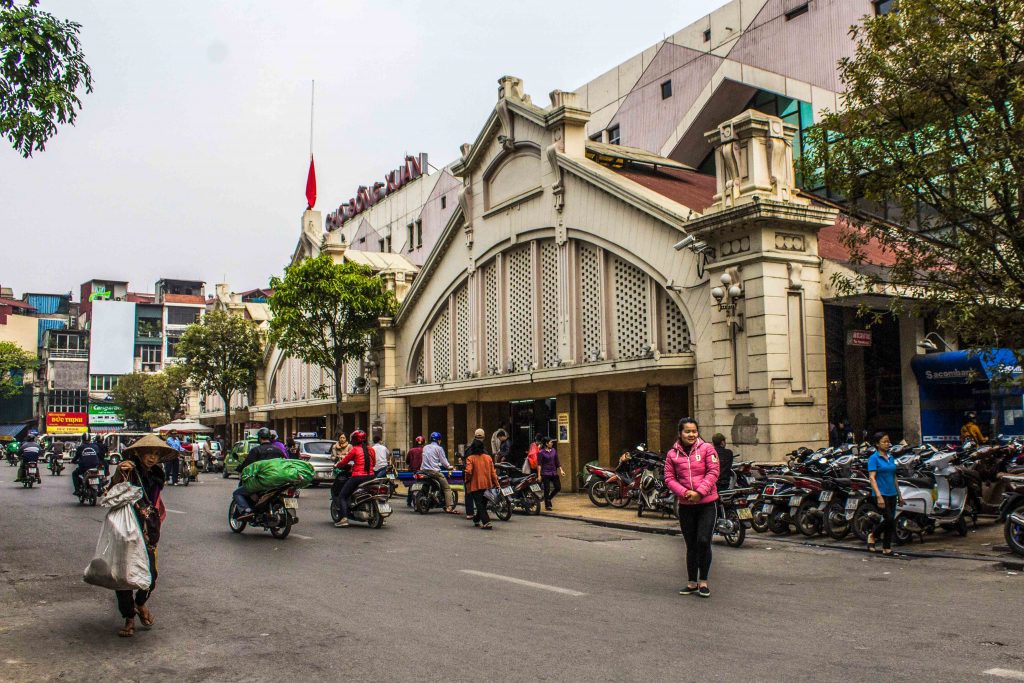 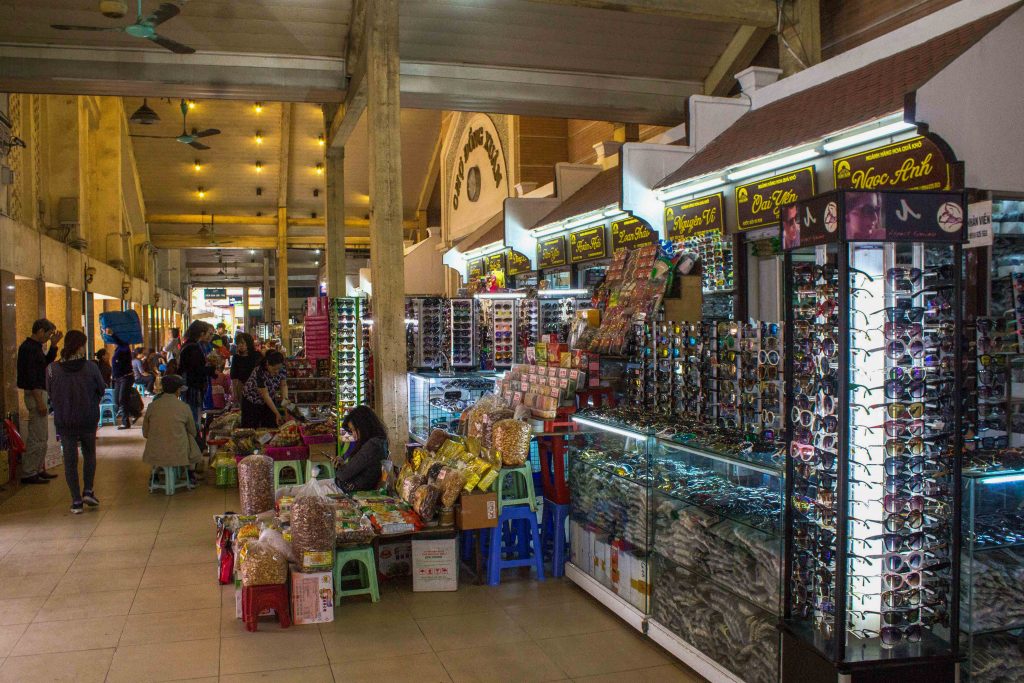 After squeezing our way through dozens of clothing racks, we reached the “wet” portion of the market, which sells meat and produce and will look much more familiar to anyone who’s explored other Southeast Asian markets. If you’re the least bit squeamish about where your food comes from, this part of the tour might not be for you (our guide gave us the chance to opt out).

In the wet market, buckets of squirming eels, partially-butchered pigs, and freshly gutted fish emit an overwhelming aroma that will have many considering the merits of vegetarianism, especially once you reach the assortment of choices over at the much less noxious fruit and vegetable stalls. 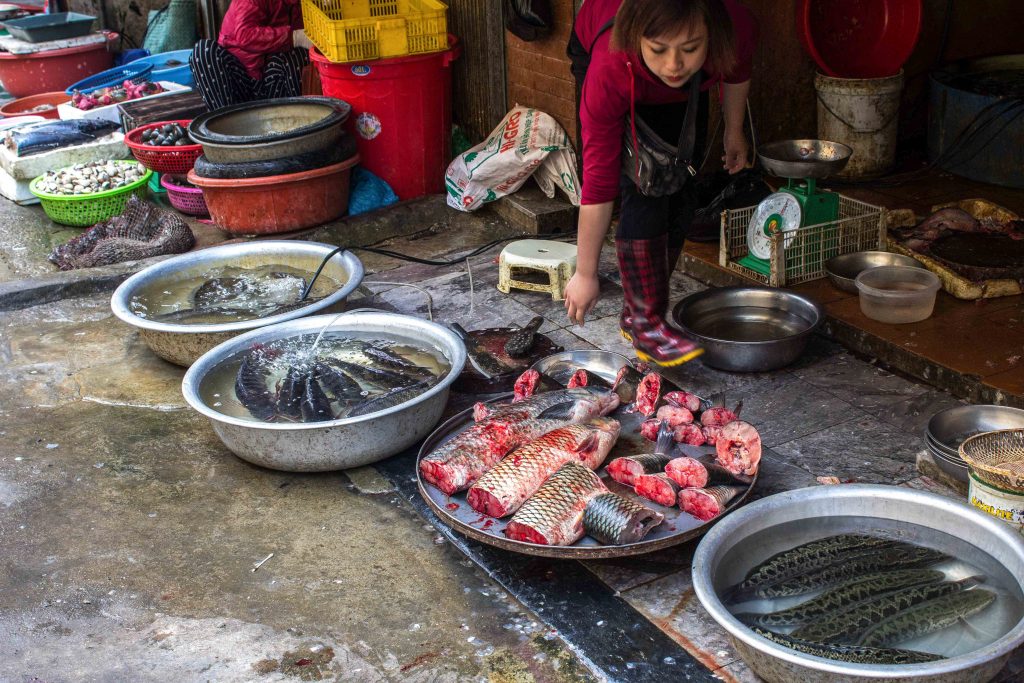 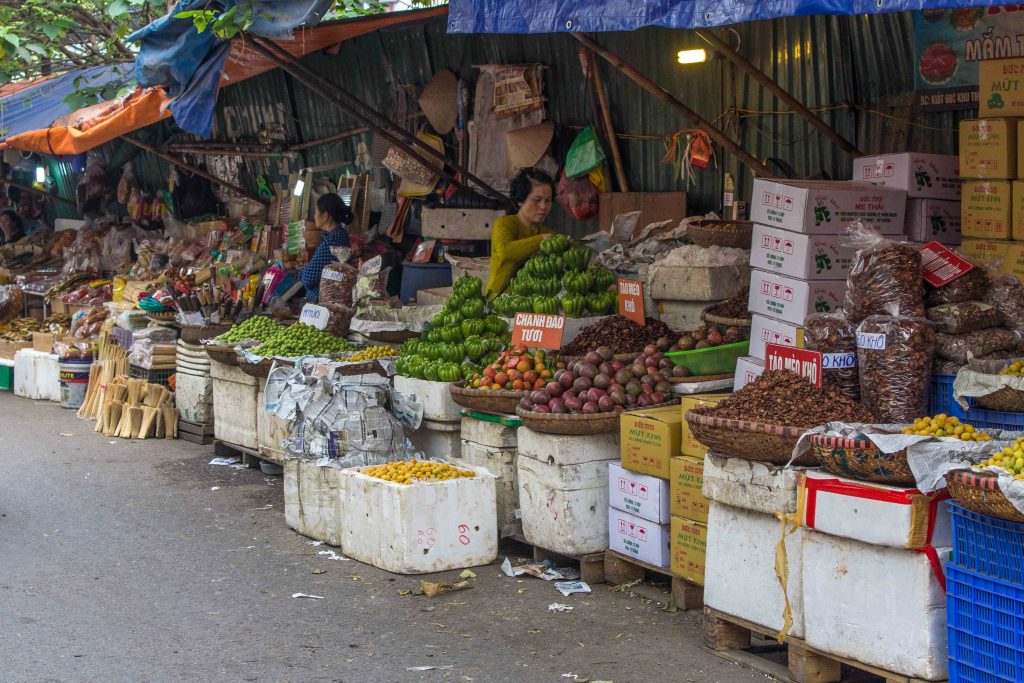 The market is completely different at night when street performers come out to entertain and artisans can be seen working on their creations. It’s more of a tourist attraction than a functioning market then, so try to visit at both times to get the full experience.

From the market, we wound our way through a series of narrow passageways that are only about as wide as your shoulders, which makes for an uncomfortable encounter whenever you meet someone going the other direction. These walkways are the primary way for pedestrians (and a few intrepid motorcycle riders) to efficiently move through the Old Quarter of Hanoi. But it’s like a maze, and there’s no way I could have figured out where I was going without a guide. 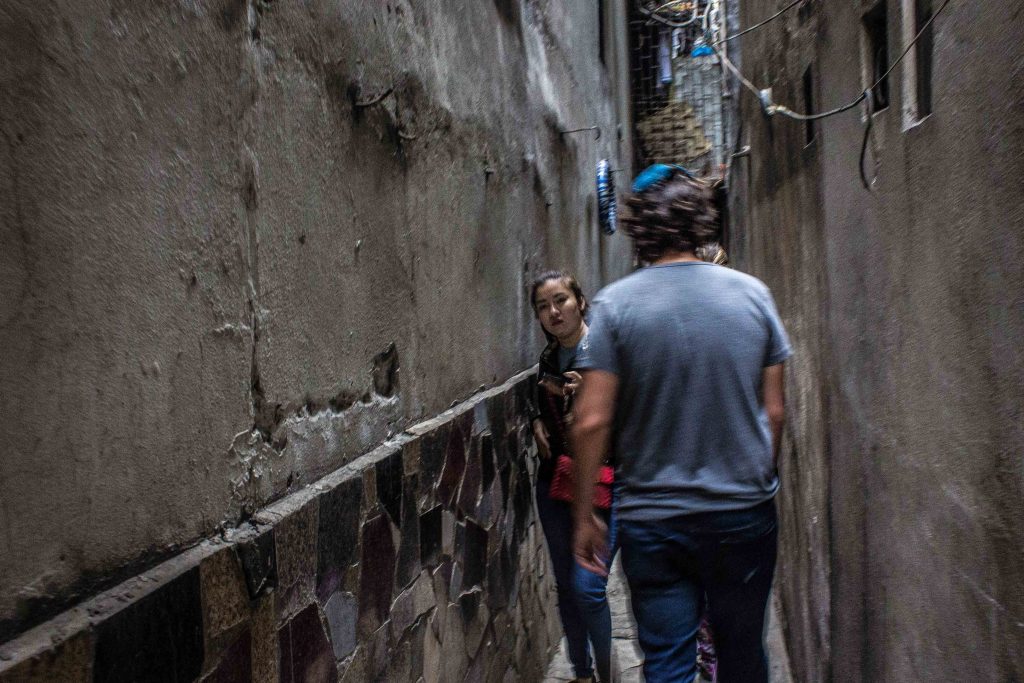 However, when we emerged from one of these indistinguishable concrete corridors, we were greeted by the magnificent Bach Ma temple. The fittingly compact temple is incredibly ornate, with red lacquered doors and intricate gold-plated artwork. It’s believed to be the oldest temple in Hanoi, dating back to the 10th century, though it was moved to its current location in the 1700s.

Seemingly out of place inside the temple is a large statue of a white horse. But if you’re up on your Vietnamese, you already knew that Bach Ma actually translates to “white horse.” It’s said that an immense white stallion stamped out the perimeter of the temple to help its designer, King Ly, create a structurally sound building. 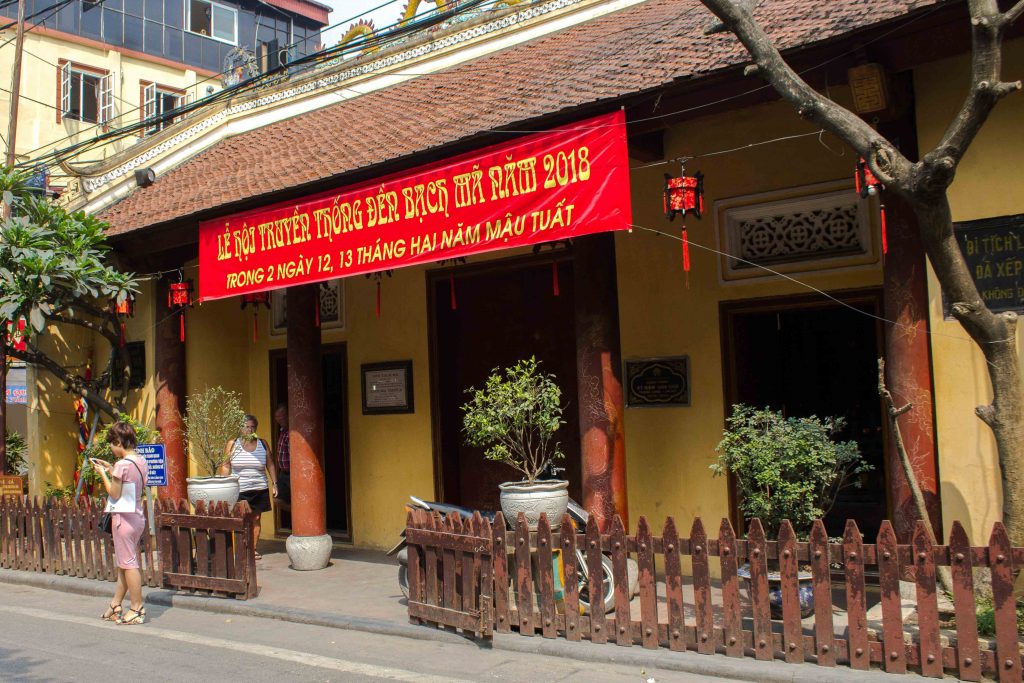 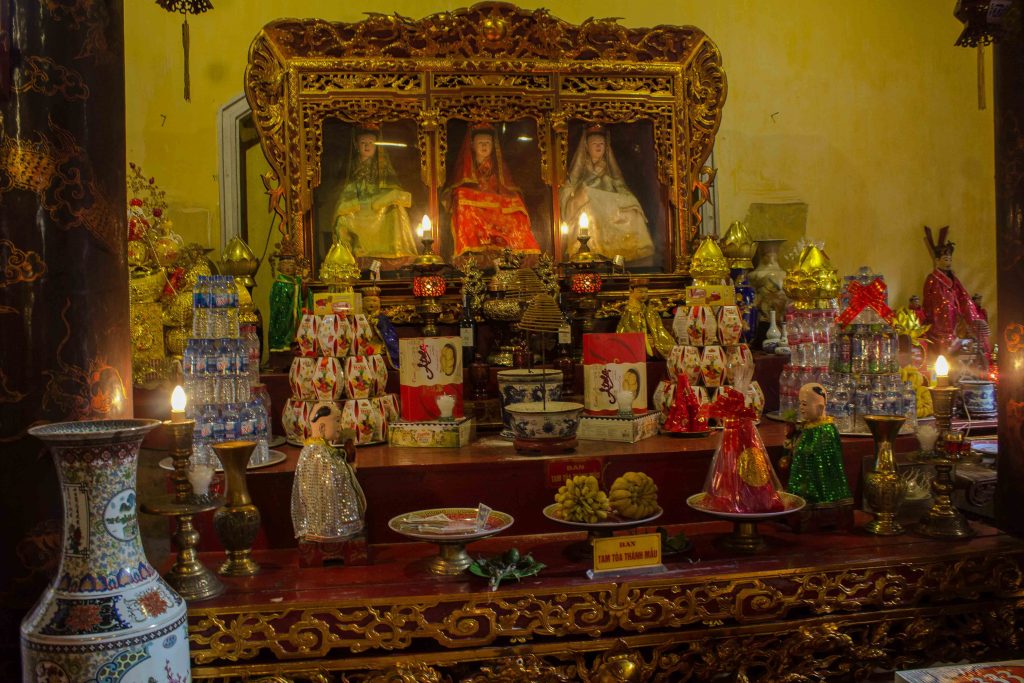 I also learned that the temples built along the edge of the Old Quarter have three openings: one in the middle for the king to enter and exit through, one on the right for commoners to enter, and one on the left for them to exit. So be mindful in how you approach the buildings, and make sure you always go in on the right side.

Undoubtedly the most scenic spot on our tour, Hoàn Kiếm Lake is Hanoi’s premier patch of nature. In this hectic city, it’s a tranquil refuge for those looking for a respite from the chaos. The path around the lake is popular with joggers, and you’ll find tai chi practitioners in the green space along the water. 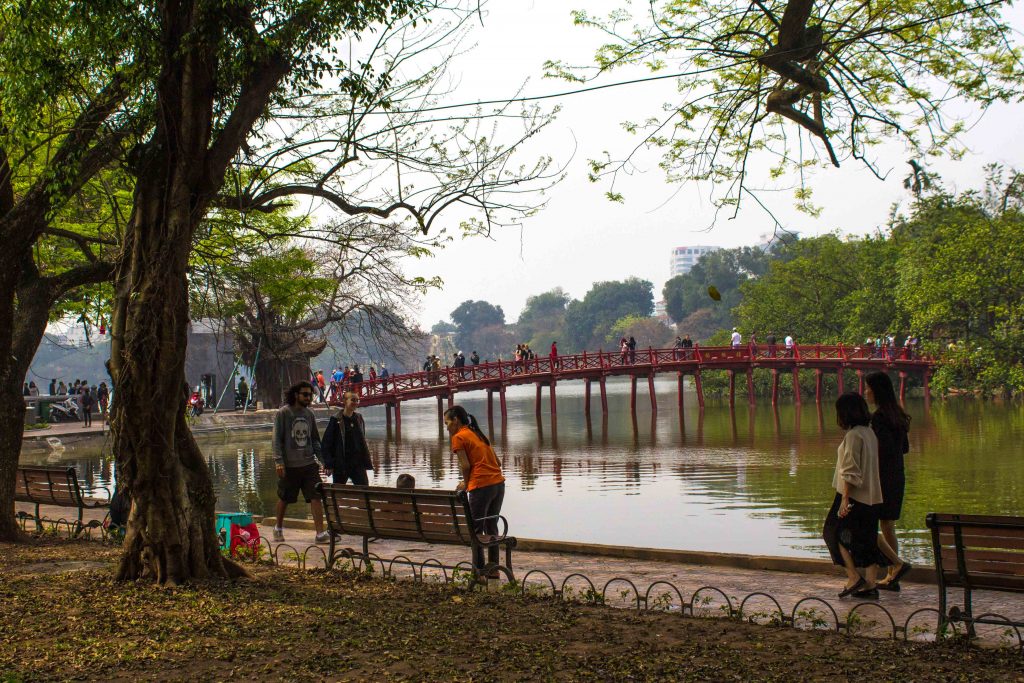 Sitting out in the lake is Ngoc Soc Temple, which is connected to the shore by the iconic Thê Huc Bridge, a beautiful red wooden walkway. It’s one of the most popular places for tourists and locals to snap a selfie, so expect crowds throughout the day. 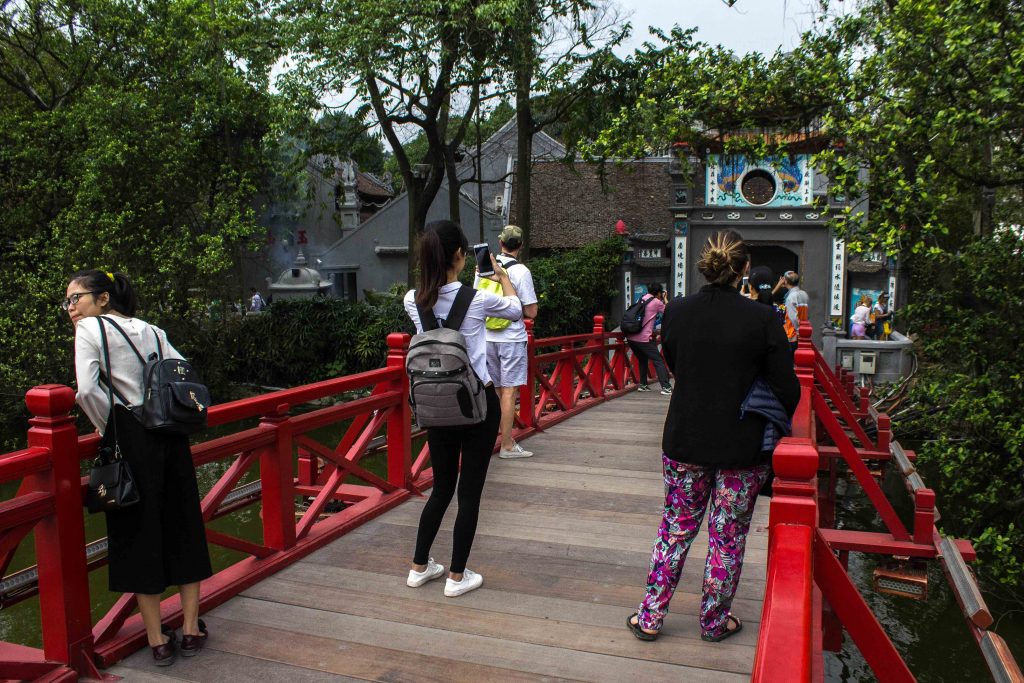 Legend has it that a Vietnamese king was once rowing across the lake when a giant turtle approached him and asked for his sword. The king had used the sword to quash a Chinese invasion of his country, and it was said to be magic. Today, the park stands as a symbol of Vietnamese independence.

One of the last things you’d expect to find at the end of an incense-filled alleyway in the Old Quarter of Hanoi is an ornate gothic church, but that’s where we ended our tour. Although nearly three quarters of the Vietnamese population follow folk religions or no religion at all (the country is officially atheist), a solid seven percent of its residents are Catholic. In fact, one of the first things we noticed when we got to Vietnam was how many more churches it seems to have than other Southeast Asian countries. 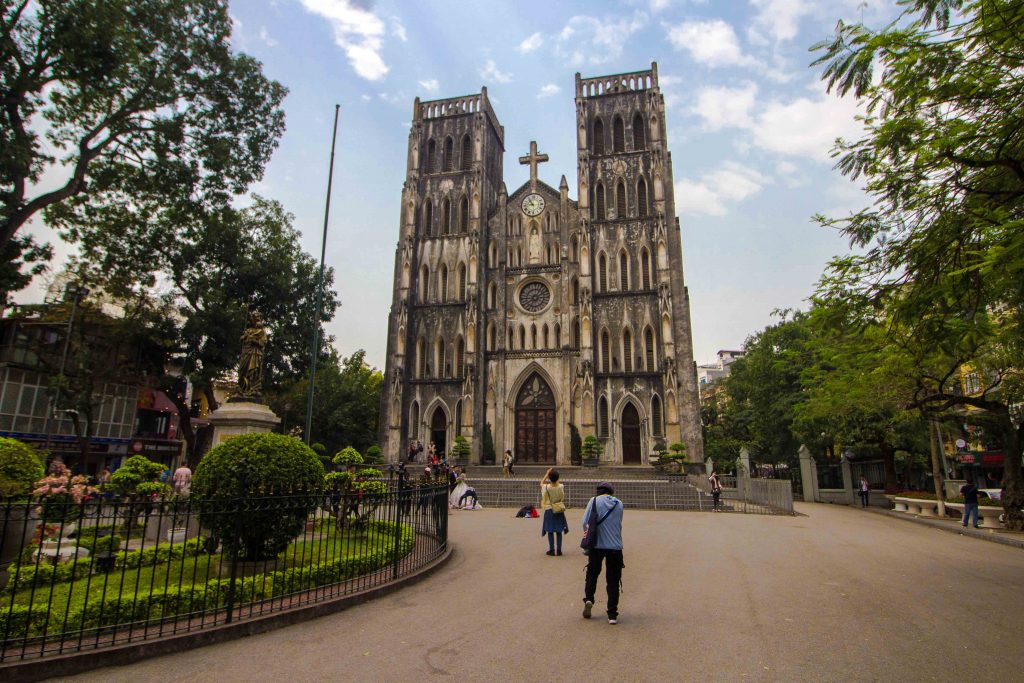 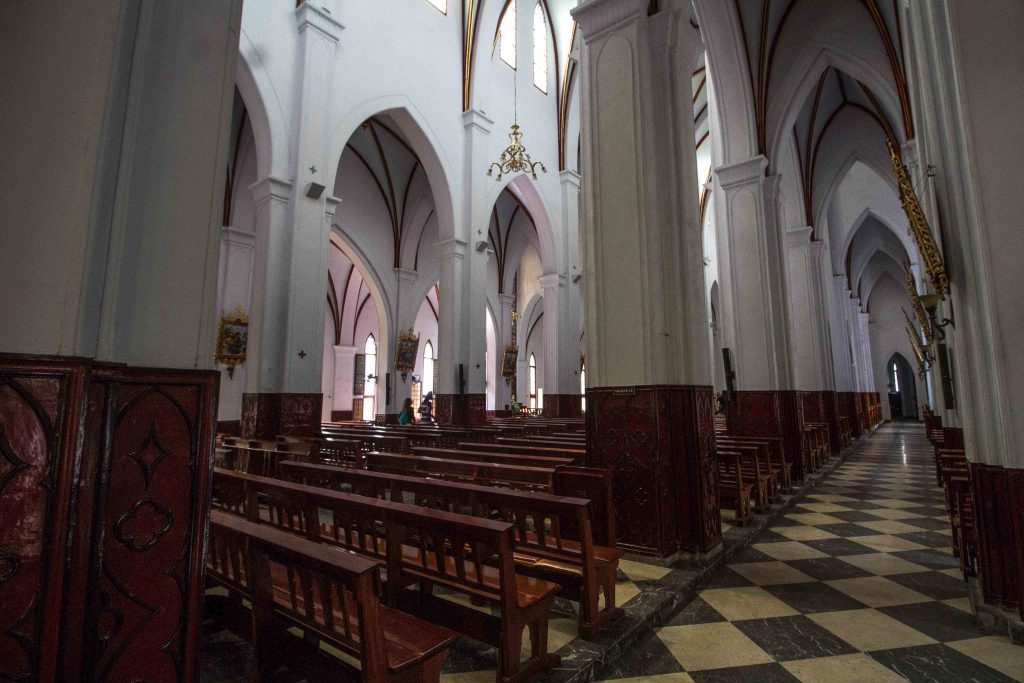 St. Joseph’s is the oldest church in the country and the headquarters of the Catholic Church in Vietnam. Mass is held every day, but it’s the Sunday evening service that draws the biggest crowds – the church overflows with people, and congregants sit in the lush gardens outside to listen in over the loudspeakers.

The gardens are also a popular location for wedding shoots; there was even one happening during our tour! In between services and when nothing else is going on, it’s possible to pop into the church for a look at the massive sanctuary and a quiet moment in the pews.

Unlike many tourist activities offered in Southeast Asia, Hanoi Free Walking Tours requires advance notice. To get a spot on one of their tours, you need to book online at least 48 hours in advance; if you don’t have a lot of time in the city, be sure to make your reservation before you get to Hanoi.

All of the organization’s tours of Hanoi are completely free, though you still need to pay for any entrance fees or food (and a portion for the guide) if that’s part of your tour. Tips are accepted, but not required or expected, and my guide seemed to accept the one I offered begrudgingly. But I don’t think I’ve ever encountered a tour guide as friendly and knowledgeable as she was, so I wouldn’t have felt right not tipping.

Have you done a free walking tour of Hanoi or some other city? Tell us about it in the comments! 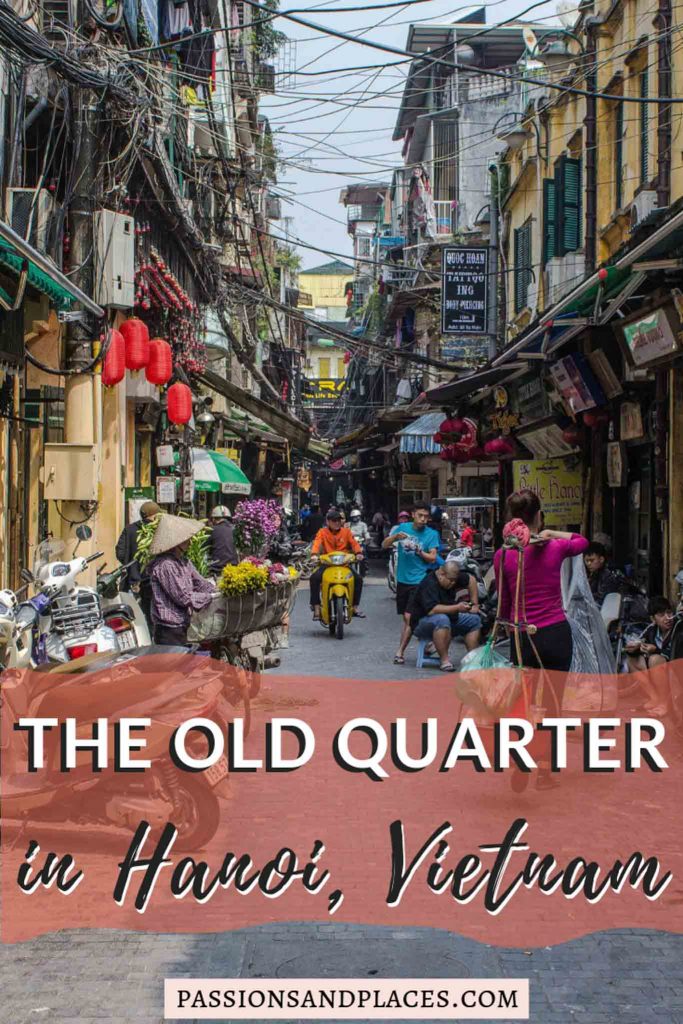 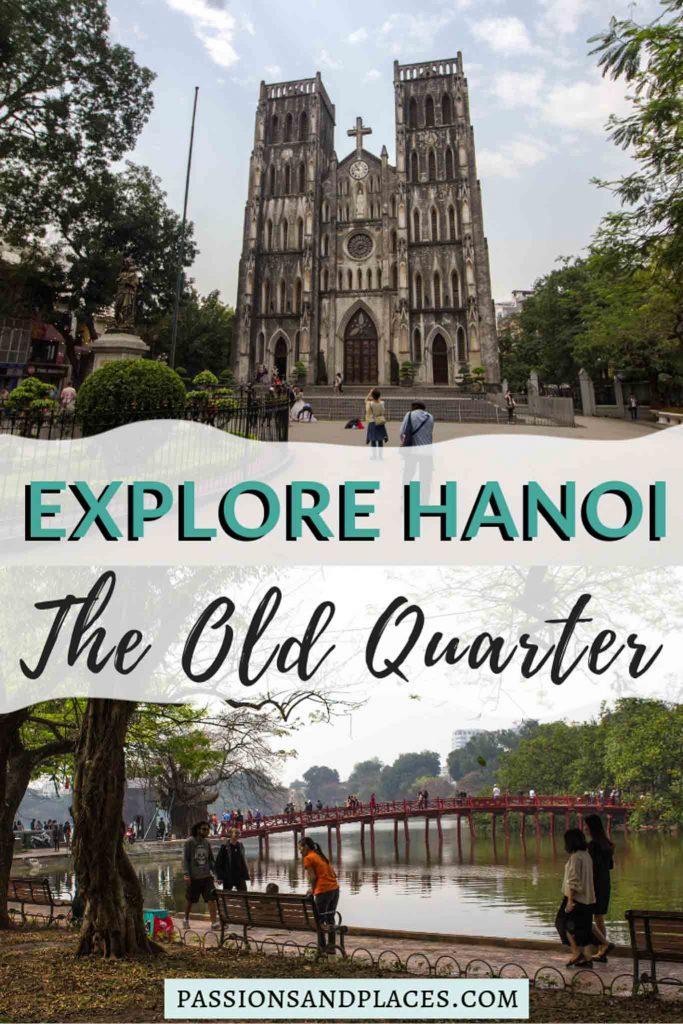