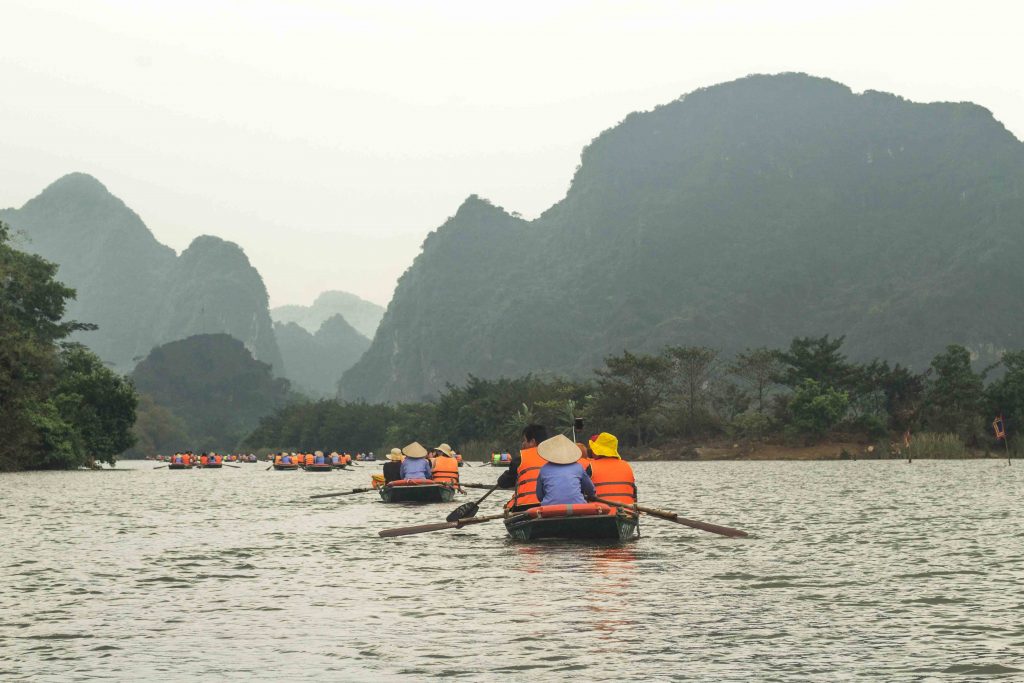 If you asked someone where to find the most beautiful scenery in Vietnam, they’d probably direct you to the famed Halong Bay. Its striking karsts rise straight up out of the sea, framing the alluring blue-green waters to create postcard-ready scenery. While Halong Bay has become marred by crowds, pollution, and overtourism, there’s no denying that the scenery is beyond belief.

So what if you could find that same breathtaking beauty in a quieter spot – and on land? The much less known area around the towns of Ninh Binh and Tam Coc offers just that, the same karsts rising up out of the ground and towering over rivers and lakes. And once you get out of town, you’ll feel like you have it all to yourself.

We didn’t realize until we arrived that most visitors just do a Tam Coc day trip from Hanoi – it’s only about 60 miles away – instead of staying overnight. While that’s enough time to experience a few hours of paddling through the enchanting canyons, we’d definitely recommend staying a couple days to really enjoy the area.

Getting to Ninh Binh and Tam Coc, Vietnam

Coming from Da Nang or Hoi An (or really anywhere), the best method for getting to Tam Coc is the overnight train, a thirteen-hour journey that will set you back about $35. With beds that lie flat and space to walk around, it’s much more comfortable than the cramped night buses that speed along the highway, not to mention a whole lot safer.

Unlike on Thailand’s trains, Vietnamese train cars are separated into four-bed cabins, each with a lockable door. On one hand, this setup probably helps prevent theft, as there aren’t any passersby with access to your bags. On the other, the isolation of a cabin could be uncomfortable for solo female travelers, especially if they end up with all-male cabin mates. 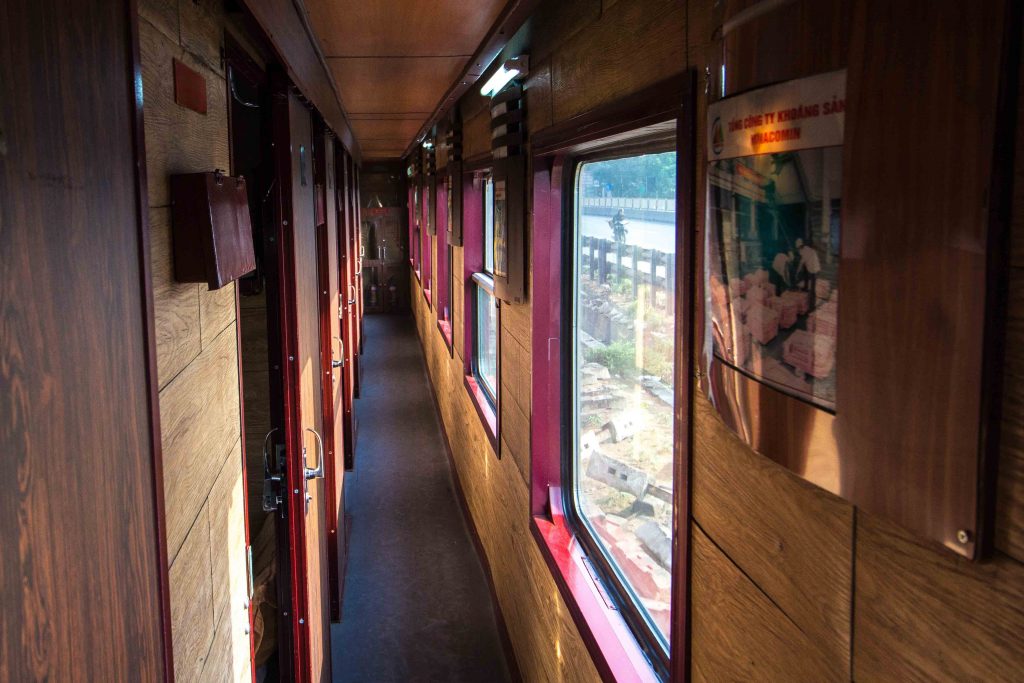 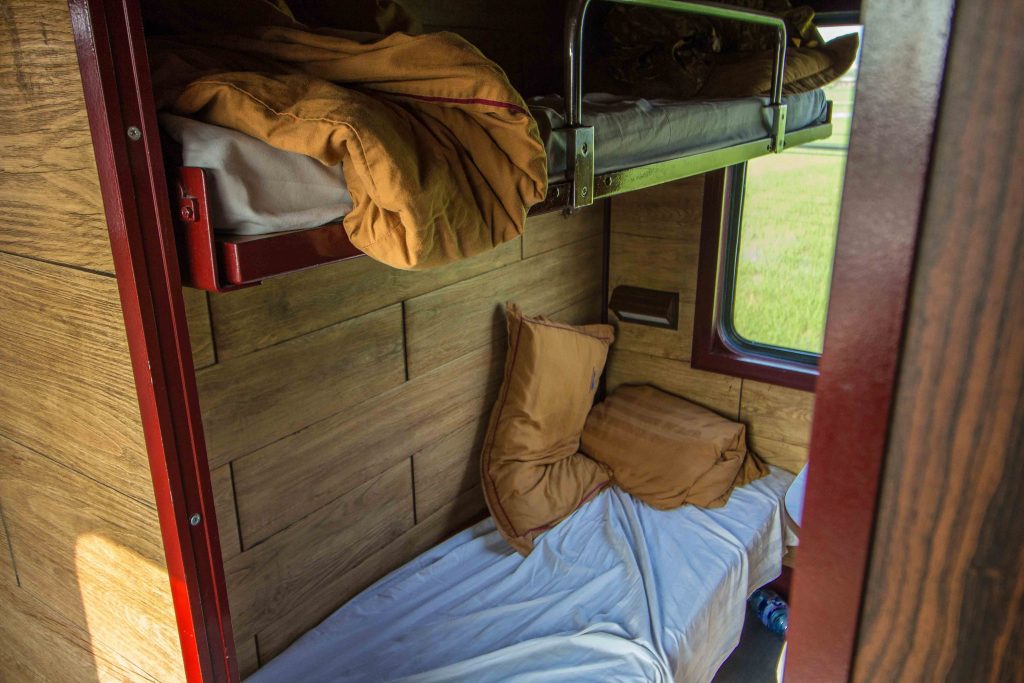 Our ride from Da Nang to Ninh Binh was uneventful, with the exception of one of our cabin mates thinking it was a good idea to play music on his iPhone without headphones (who doesn’t carry headphones on the train?). Since the other Vietnamese guy in our cabin didn’t say anything, we figured it must be culturally acceptable? But the beds were pretty comfortable and the cabin was gloriously dark, allowing us a quality night’s sleep before we arrived at 10:00am.

The train station is in the much larger town of Ninh Binh, about four miles away from Tam Coc. After reading that Ninh Binh has little to offer in the way of tourism, we decided to go straight to Tam Coc and base ourselves there. But both towns have lots of hotels, and it’s super easy to travel between them. The taxi from the train station to our hotel in Tam Coc was about $4.

Things to Do in Tam Coc

If there’s one activity that attracts visitors to Tam Coc, it’s the boat tours. The town is situated around a lake where dozens (hundreds?) of local guides offer scenic tours in their rowboats. 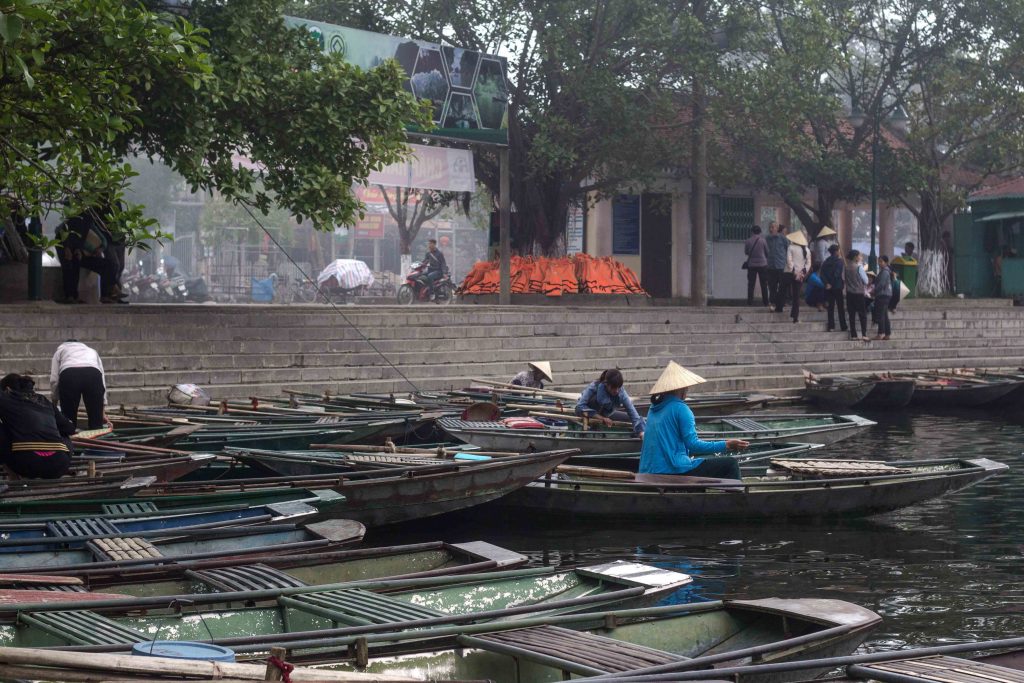 Unfortunately, from what we read and saw, many people walk away from their boat ride disappointed. The rowers are known to ask for tips mid-ride (with the implication that they’ll stop paddling in the middle of nowhere if one isn’t given) and insist that passengers buy them snacks and drinks at the end of the ride (which they promptly return to the store for cash). 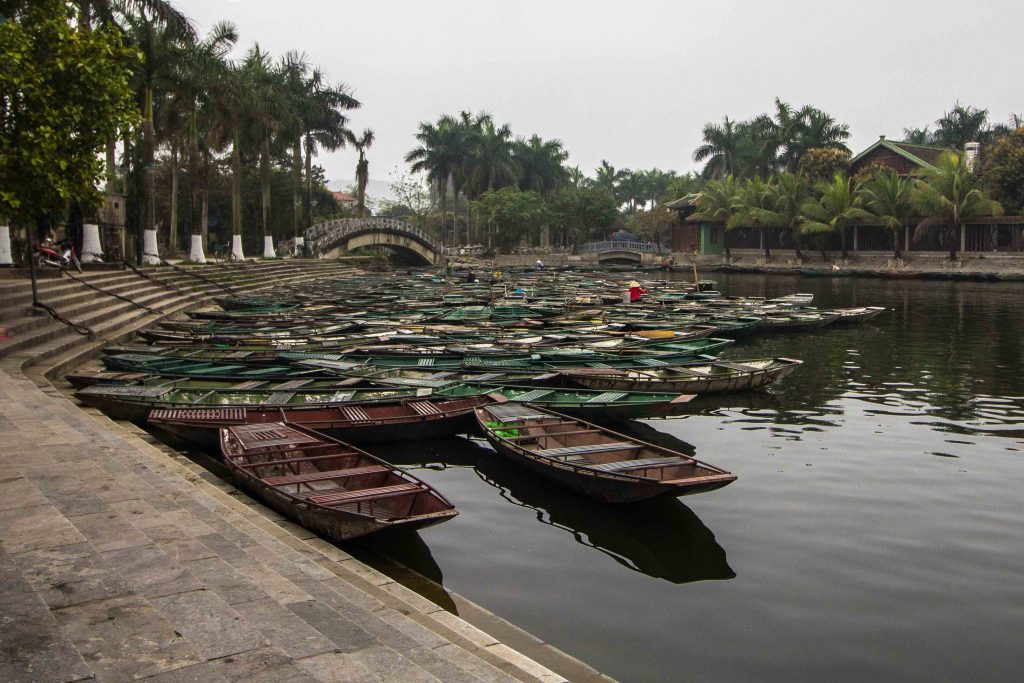 In an effort to avoid getting scammed and find a less touristy option, we rode a pair of rickety bicycles out to the UNESCO World Heritage site of Trang An, fives miles away, which we heard offered a more professional experience.

Unlike the lake in Tam Coc, Trang An is much more popular with Vietnamese tourists. It was packed with local people, but we were just about the only foreigners there, and it was free of scams. Trang An boat tours cost 200,000 VND (about $8.80) per person, making them about the same price as in Tam Coc, but without the forced tips and snacks on top.

Once we bought our tickets, we headed over to the boat dock, where a staff member (who was the only English speaker we encountered there) told us we actually had three different tour options.  Two of them involved stopping at a site where the movie King Kong: Skull Island was filmed, which seemed like it was bound to be a tourist trap involving selfies with leftover set pieces.

We opted for the third option, which visited the most caves, and were eventually shuffled onto one of the boats with three Vietnamese tourists and a rower. 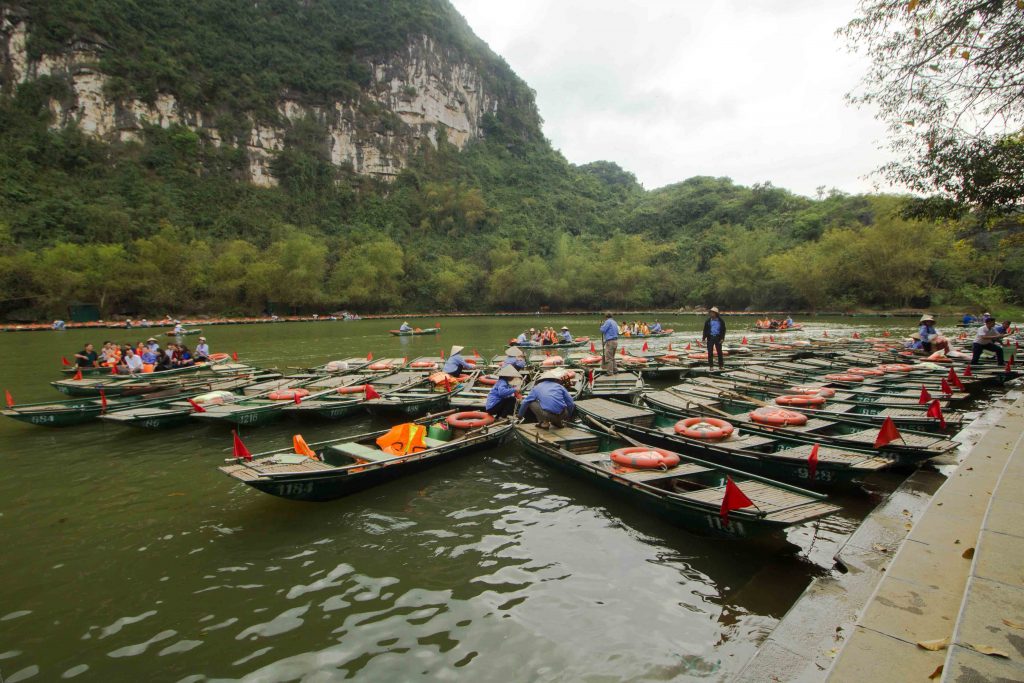 For the next few hours, we paddled our way through spectacular limestone canyons and crouched down as the boat glided through nine caves (some natural, some artificial) that cut beneath the mountain peaks.

A few times during the ride, we were prodded to pick up a paddle and “assist” the rower – only I don’t think our efforts accomplished much, since the paddle blade was broken in half and we didn’t have an equal number of rowers on each side of the boat. In fact, it seems like it would have made it more difficult, but everyone was asked to pull their own weight nonetheless. 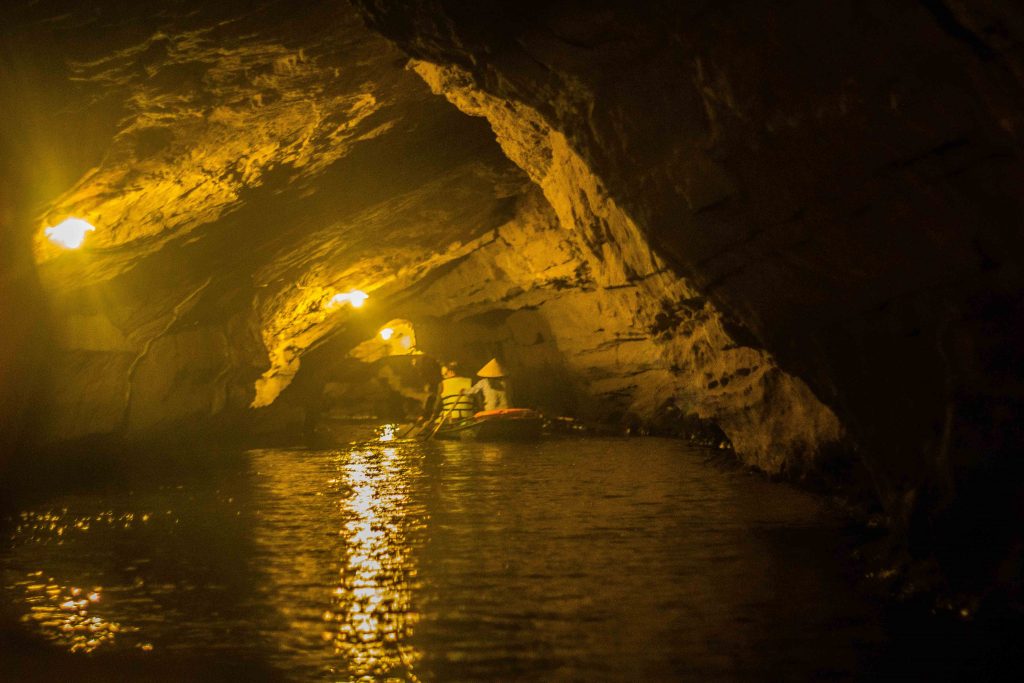 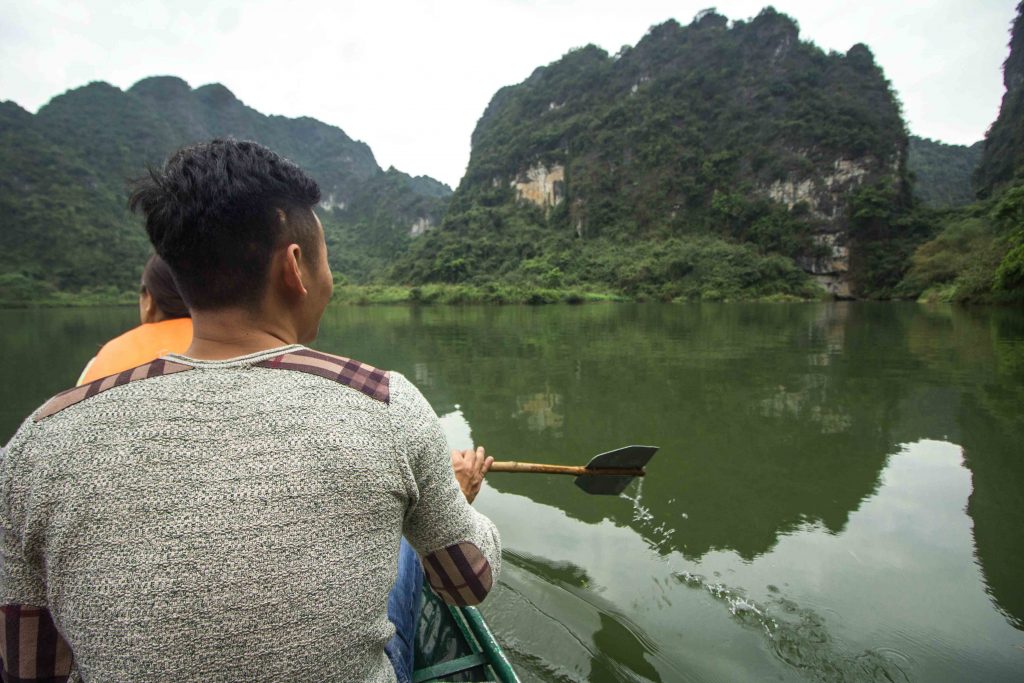 The boat also stopped at three temples, which, though not as elaborate as some of the other ones we’ve visited in Southeast Asia, were amazing to see nestled amidst the rocky cliffs. The locals from our boat made offerings and took time to pray at each of them, while we enjoyed the scenery. 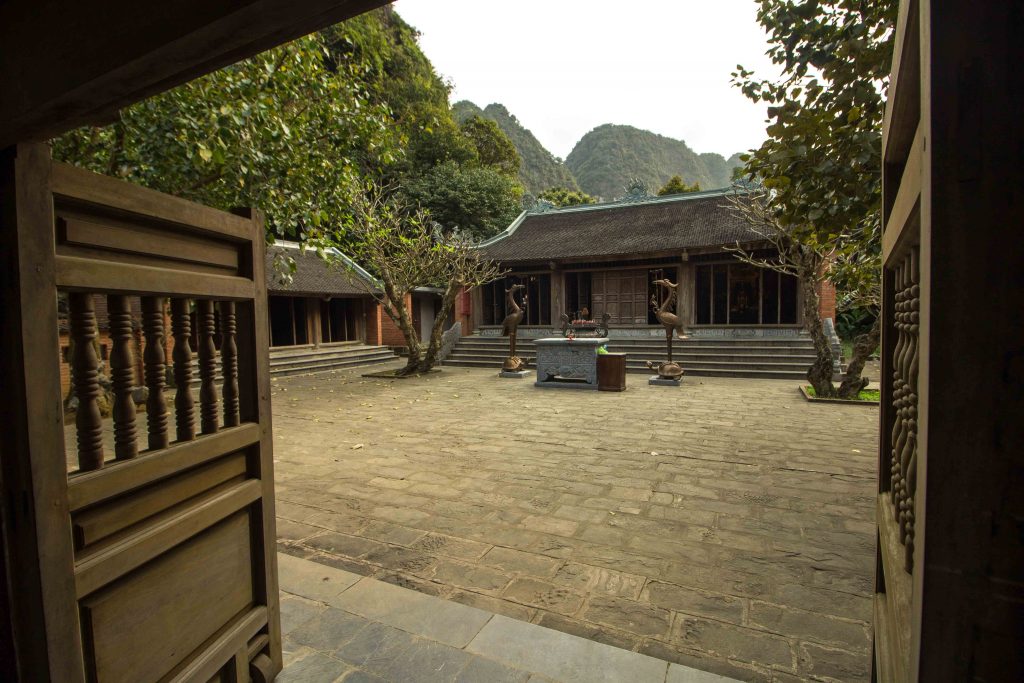 If there’s one other thing we’d suggest doing in Tam Coc, it’s exploring the surrounding countryside by bicycle, which can be rented around town for about $2. While Tam Coc itself is smoky (the smell of burning garbage was ever-present) and crowded with touts, the emerald green rice fields and ornate temples just outside it beckon anyone up for some independent exploration.

Some people rent motorbikes instead, but I didn’t really see the point. Almost everything you’d want to visit is within an hour’s bike ride; why move faster and see less along the way? 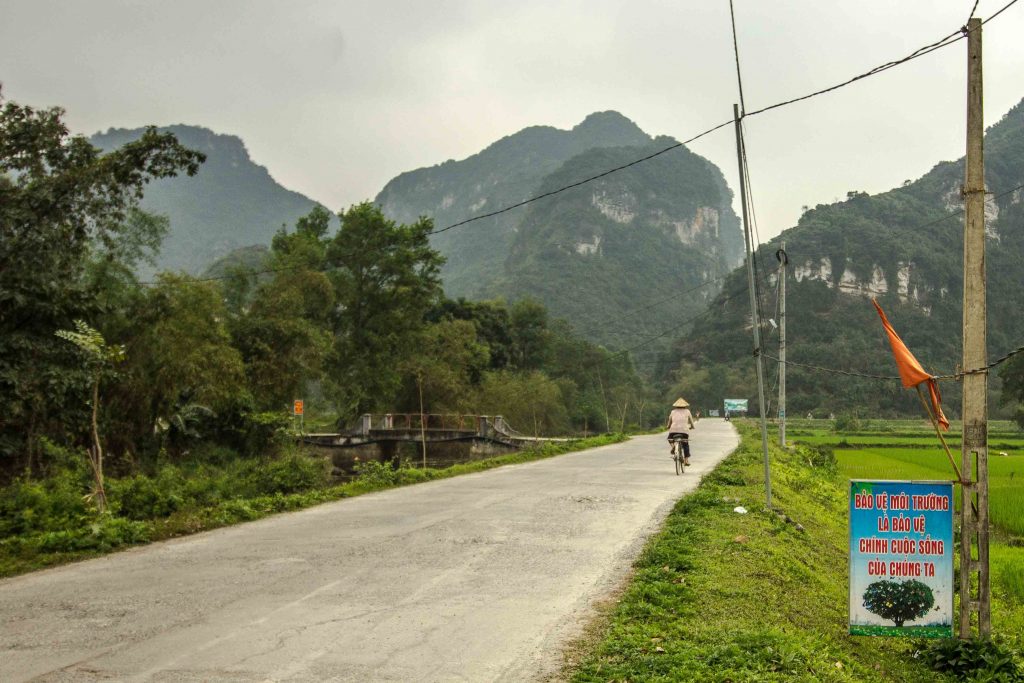 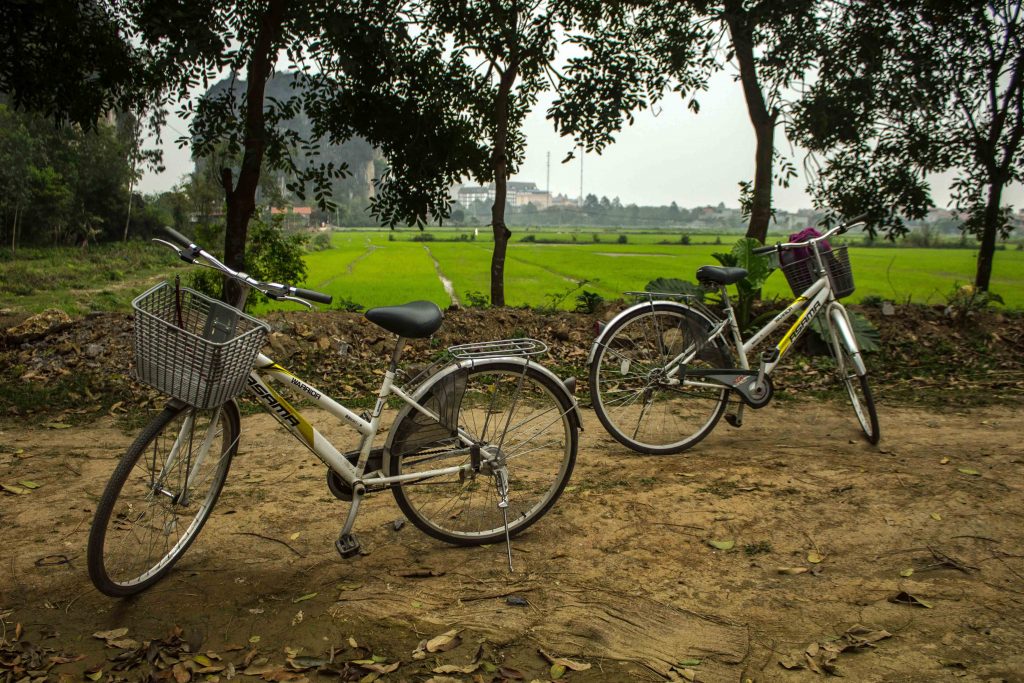 The first stop on our cycling adventure was one of the top sites near Tam Coc, Bich Dong temple, just a few miles down the road. It’s a series of three pagodas carved into the cliff face and was the perfect opportunity to see one of the types of temples Vietnam is known for.

Near the entrance to the temple, we came upon a “security guard” directing traffic, who sent us to a covered area where we were told to pay 50,000 VND each to park our bikes. Having heard about this scam, we backtracked fifty yards to a coffee shop, grabbed a couple of drinks, and then left our bikes there. The temples are supposed to be free to visit, and this “parking lot” is just a way to get some money out of unsuspecting visitors.

After we finished our coffees, we crossed an ornate archway to see the first pagoda, and were immediately struck by the utter tranquility of the site. Picturesque temples with upturned roofs surrounded a small courtyard where visitors could sit and reflect on their experience. 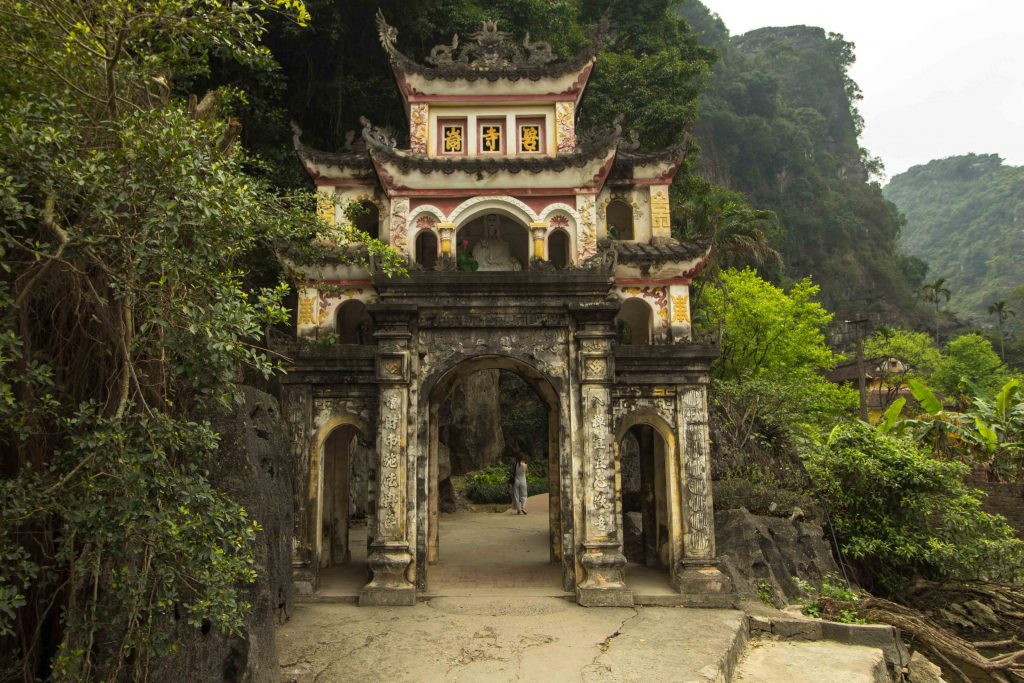 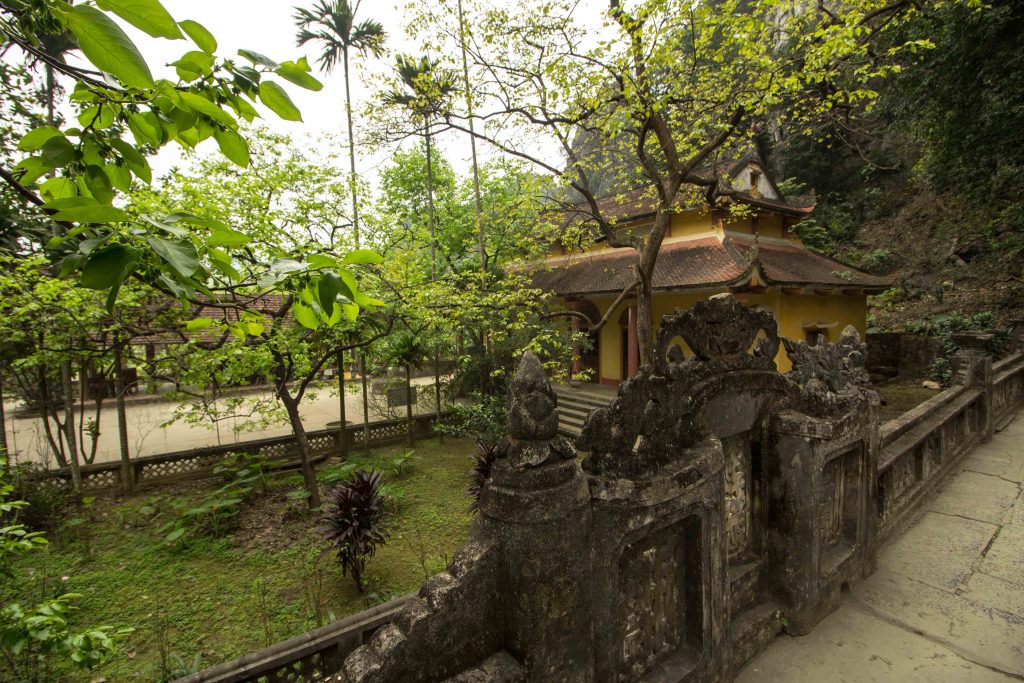 A steep rock staircase led up to the second tier of the pagoda, where another temple greeted us. But the best part was the small passageway behind the temple that led inside the cliff face and ascended to the third level. Some parts were lit, but others were pitch black, so it pays to have your phone out for light in this section.

The top level consisted of a much smaller and fairly unadorned temple with a small patio for looking out at the rice fields. These were some of the best views we had in Tam Coc and are reason enough to visit the temple. 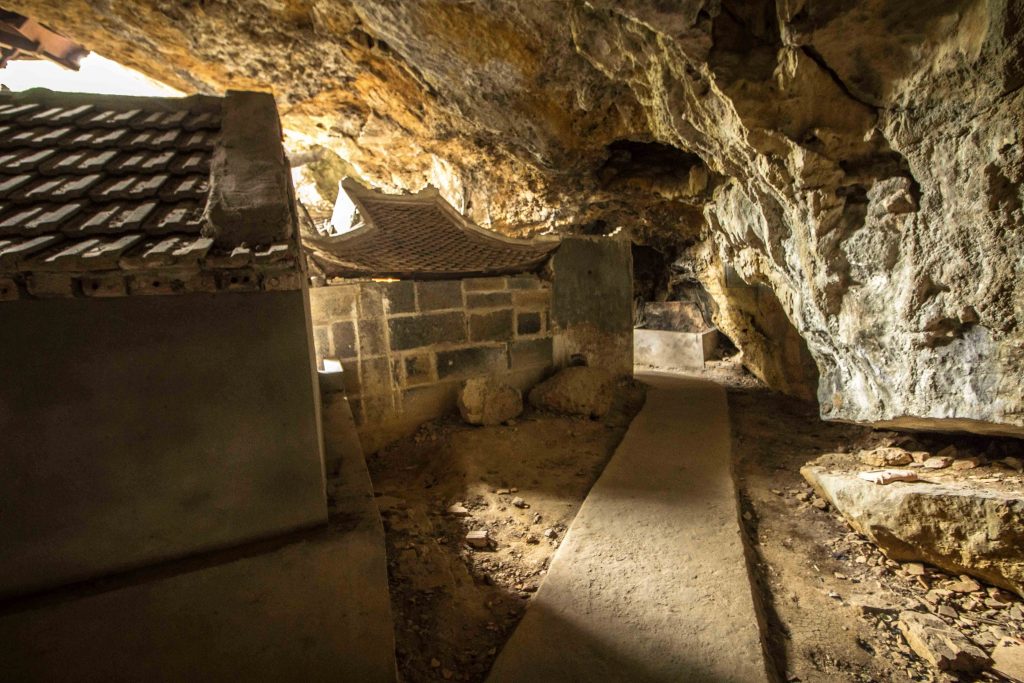 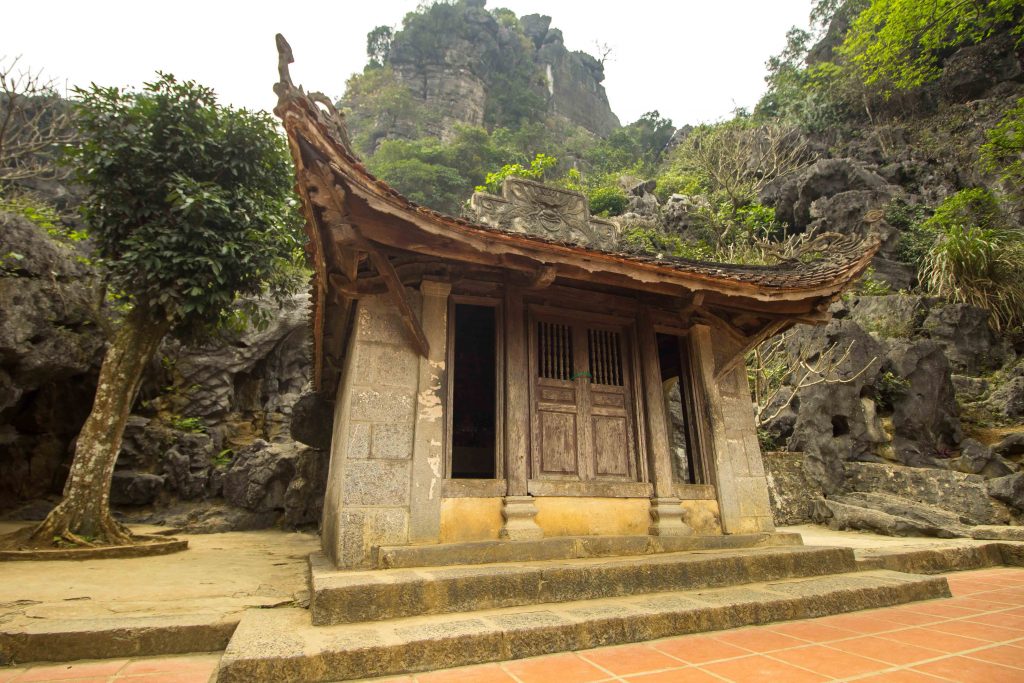 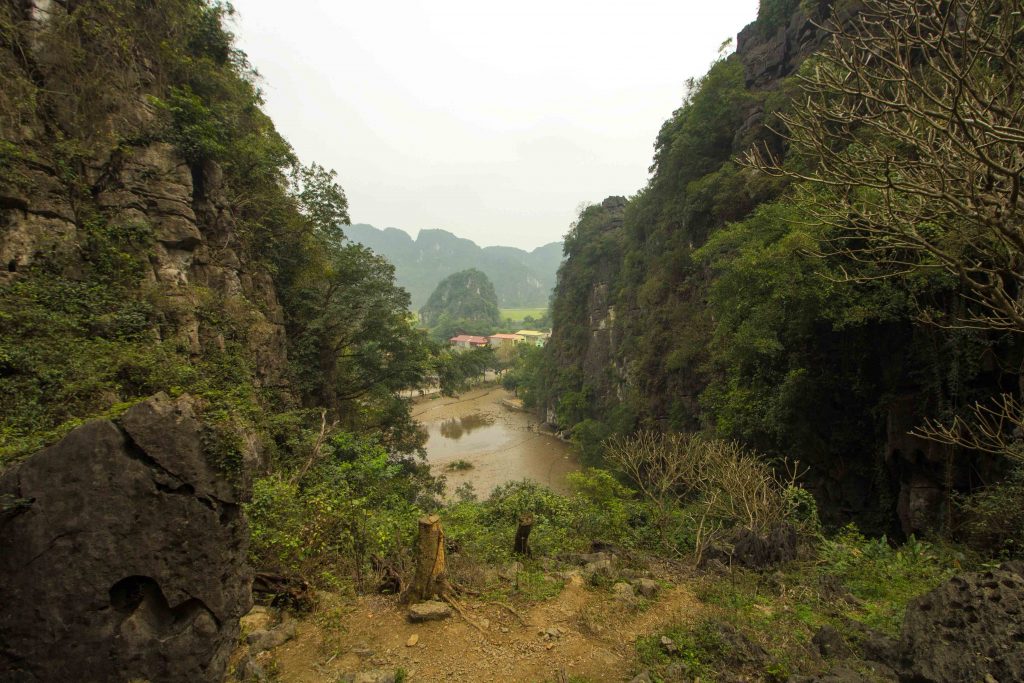 After Bich Dong, we briefly considered a ride through Thung Nham Bird Garden, but it seemed to be an artificial park set up as a tourist site, and the countryside was more intriguing to us. So we crossed back through Tam Coc and headed north to check out some of the backroads on the other side of town.

This was definitely the right choice, as it wasn’t long until we reached the most scenic bend in the river, with dozens of rowboats passing by. We also came upon a Chinese cemetery, which was an interesting site, as cremation is so prominent in Southeast Asia that we’ve seen almost no cemeteries anywhere in the past year. It was quite peaceful, with lots of different interesting headstones. 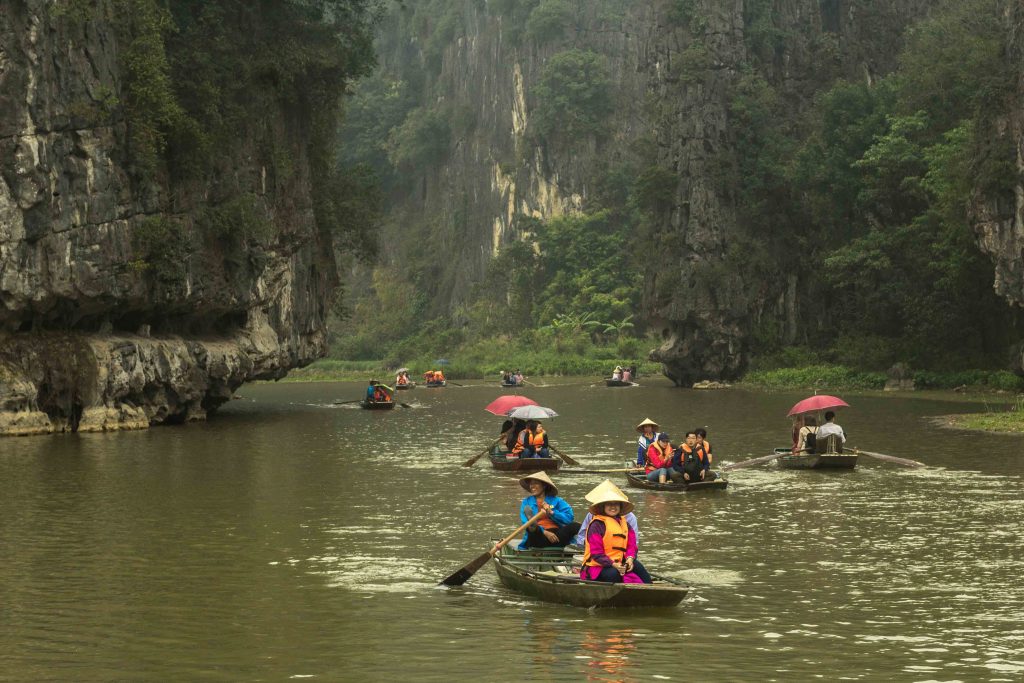 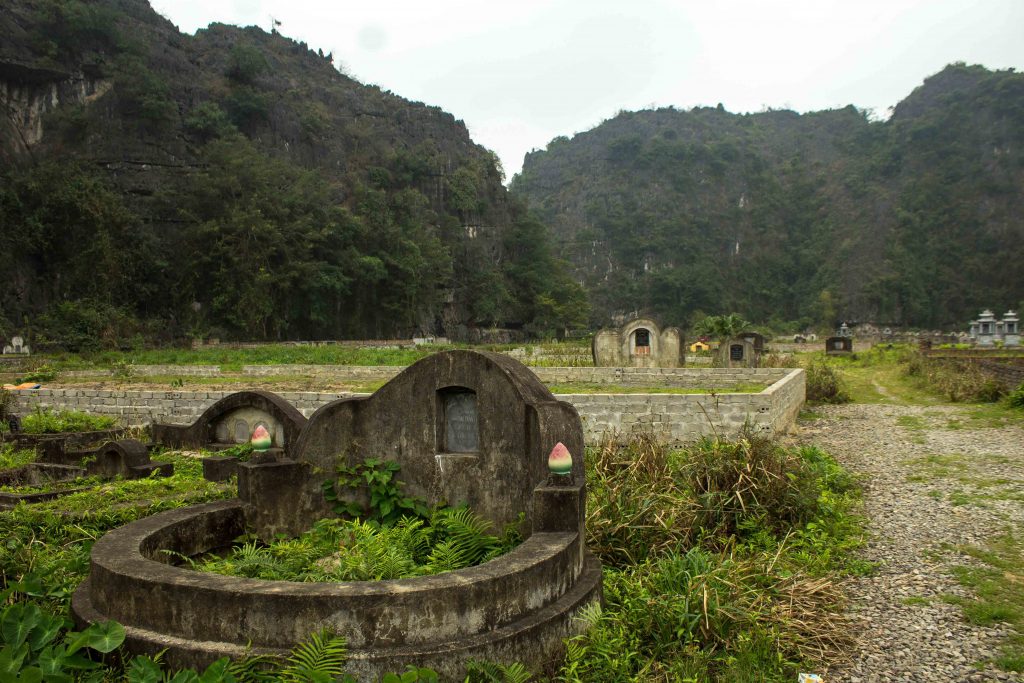 Throughout our travels elsewhere in Southeast Asia, we kept hearing about Vietnam’s amazing food scene. Our previous stop, the tourist hotspot of Hoi An, didn’t disappoint, with its impressive selection of soups, curries, and spiced tofu that radically differed from the Thai-influenced food we’d been enjoying in Cambodia and Laos.

So it came as a surprise that most of the restaurants in Tam Coc served the exact same mediocre food: bland noodles, greasy tofu, and flavorless stir-fried vegetables. Where was the culinary variety we’d seen in Hoi An and heard Vietnam was famous for?

I think Tam Coc’s status as a popular day trip destination is the problem. Many people don’t even spend the night there, much less the six nights that we booked, and restaurants can get away with food that’s overpriced and underwhelming when nobody eats in the same place twice. We did find a restaurant called Sun Flower to be a half-step above the others though.

One other bright spot in Tam Coc’s food scene was Chookie’s Beer Garden: veggie burgers, smoothies, espresso drinks, and tofu scrambles, all served in a pleasant open-air setting. And from the looks of the oven being constructed during our visit, wood-fired pizzas will be coming soon.

Though Chookie’s is a bit pricey compared to the other places in town, it’s completely different from everywhere else and was a welcome break from what we’d been eating. Besides, Chookie’s was the perfect place to rest after a day of cycling through the countryside. 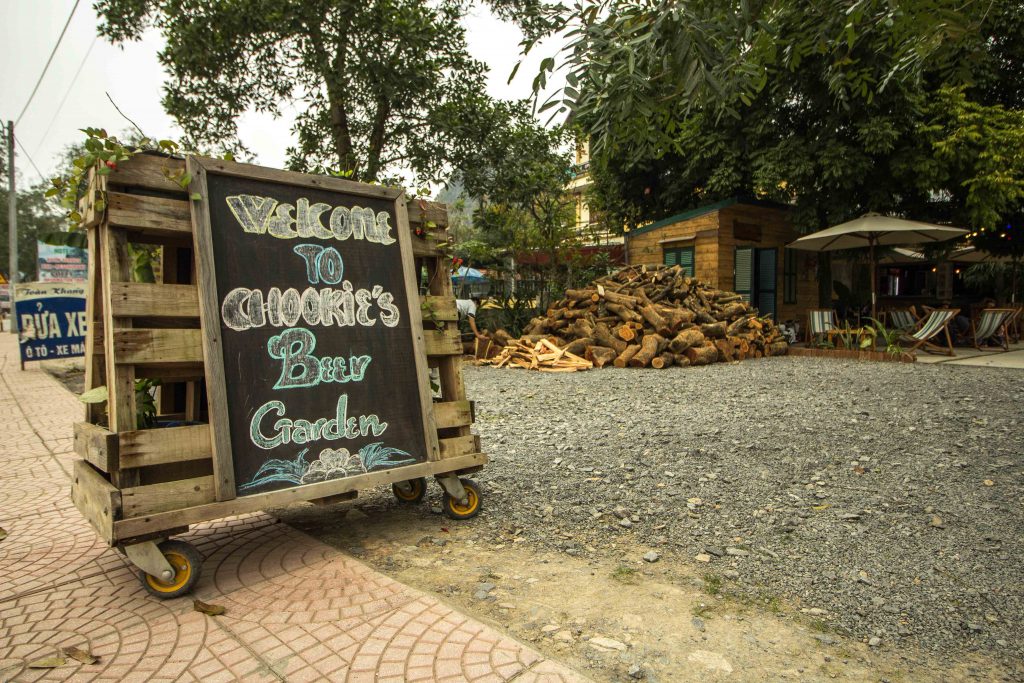 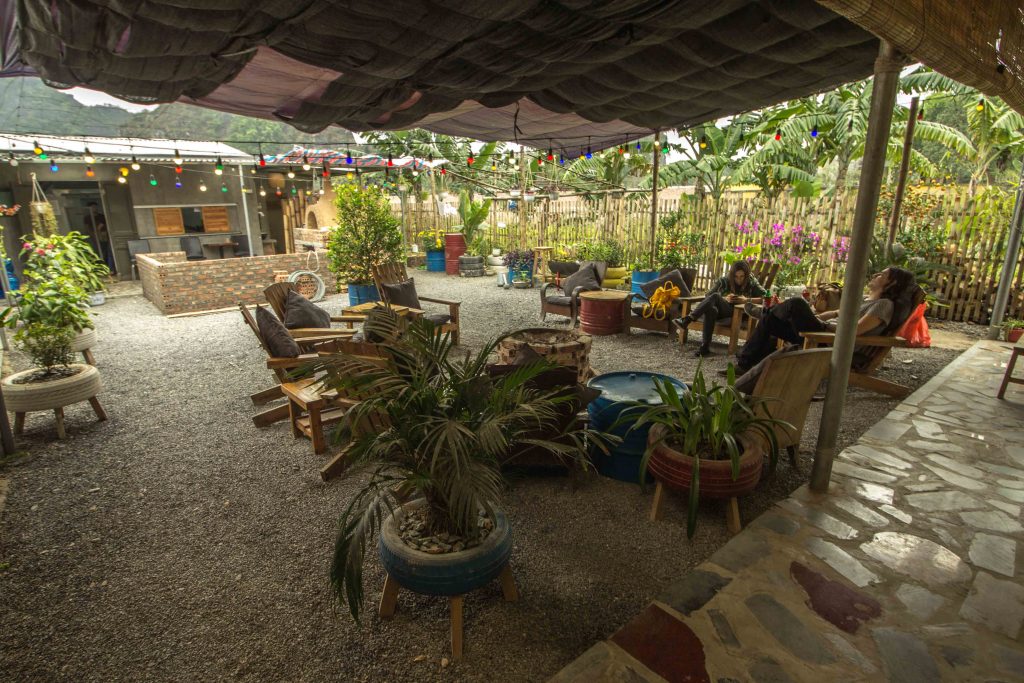 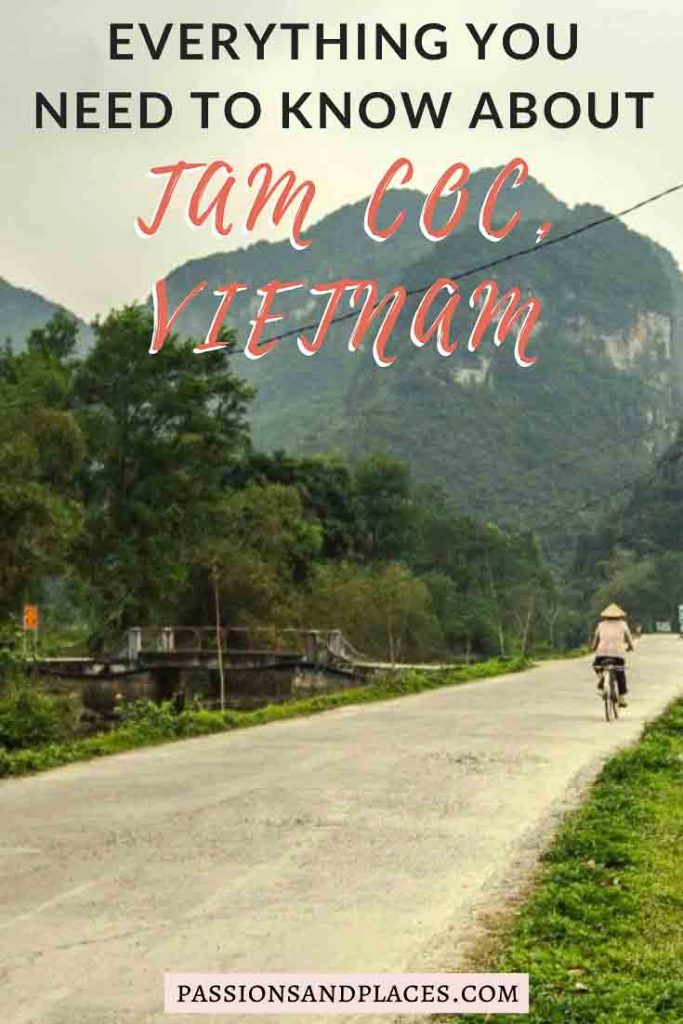 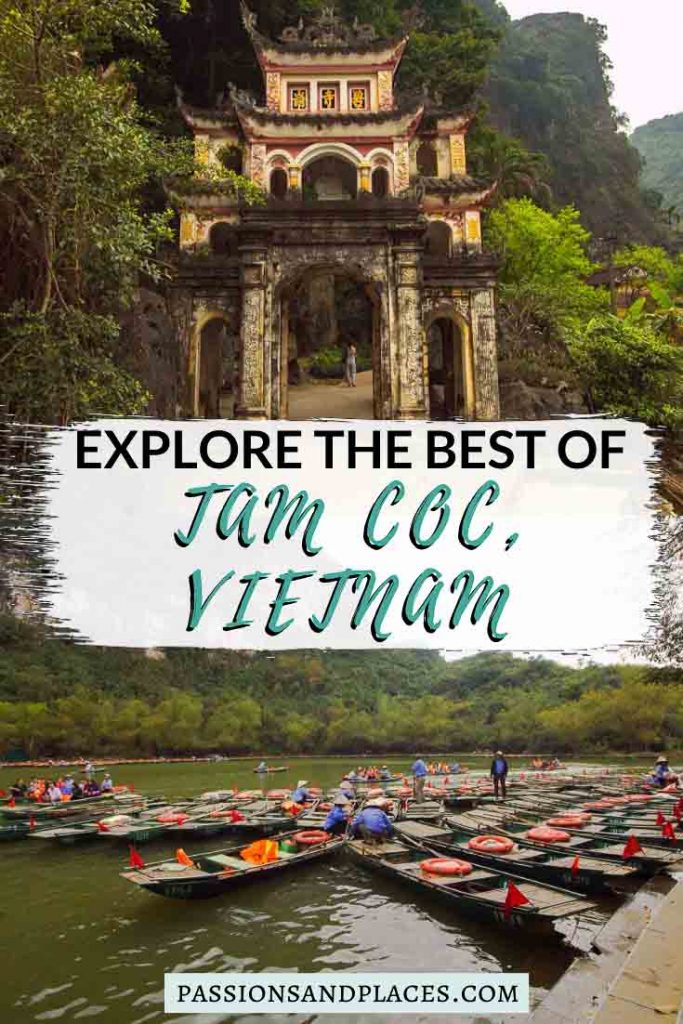