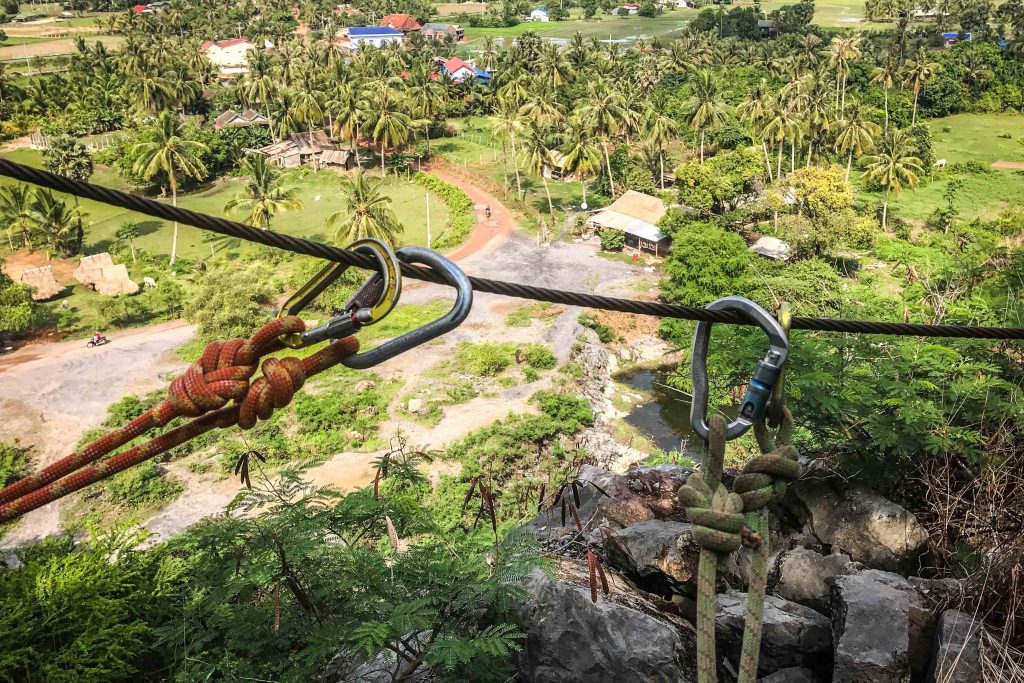 If you’ve traveled around Southeast Asia, you’ve probably been treated to views of the magnificent limestone karsts that dot the landscapes. Maybe you’ve even glanced up at one and, like a child looking up at a particularly inviting tree, thought, “I could climb that.”

These magnificent rock walls attract climbers from around the world, but even if you’re not experienced, you’re in luck: there are a few places around Southeast Asia that offer rock climbing opportunities for complete beginners, and Climbodia (can you guess what country this company’s located in?) is one of the best. 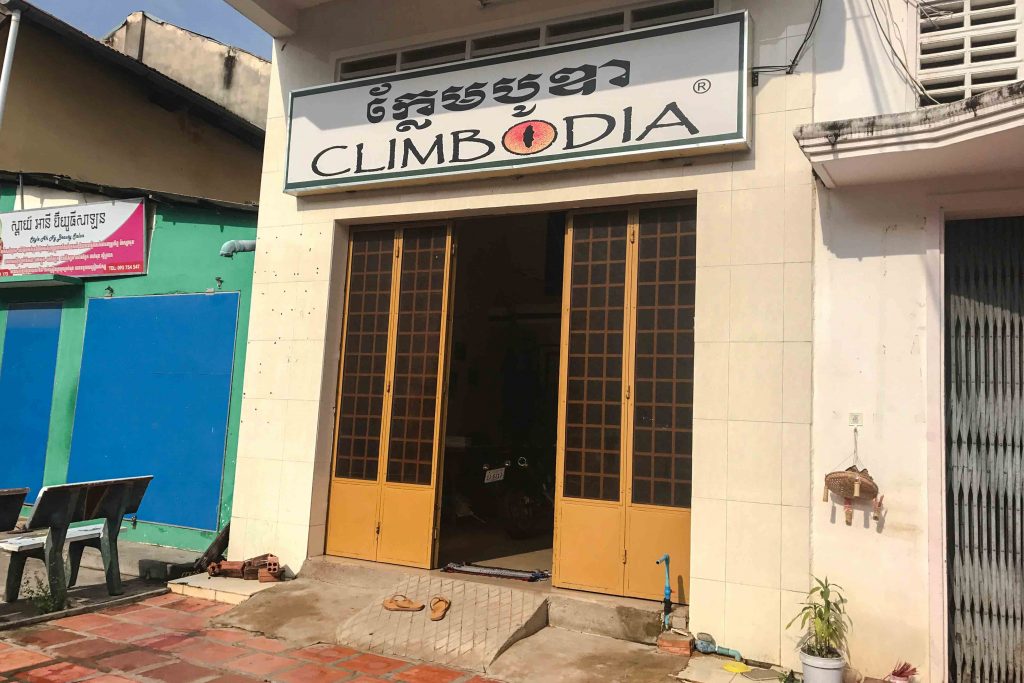 If the idea of rock climbing in Cambodia appeals to you, you’re in luck. A Belgian climber, David van Hulle, who wanted to bring the thrilling sport of rock climbing to Southeast Asia, set up shop in the sleepy riverside town of Kampot. Since 2013, he’s been showing the ropes (literally) to a group of Khmer guides, who take customers up the iconic karst mountains a few miles outside of town.

A trip with Climbodia is a great way for beginners to get a taste of the rock climbing experience. Their four-hour Discovery Tour costs $40 and takes participants on various types of terrain using four different climbing techniques: scrambling/top roping, via ferrata, abseiling (rappelling), and caving.

While the price tag might seem a bit high compared to some of the other activities available around Kampot, this is a unique experience that’s well worth the cost. Additionally, part of that money goes into buying the high-quality equipment that will keep you safe.

Unlike some adventure activities in Southeast Asia, Climbodia is serious about safety standards. You’ll get the adrenaline rush of rock climbing while being relatively certain you’ll return to your hotel in one piece.

While most visitors will complete their climbs with a few other people, we visited Kampot during low season (April), so I ended up with a private tour. While it makes things easier and faster for belaying, I was a bit uncomfortable with all the focus being on me and my less-than-stellar climbing skills. 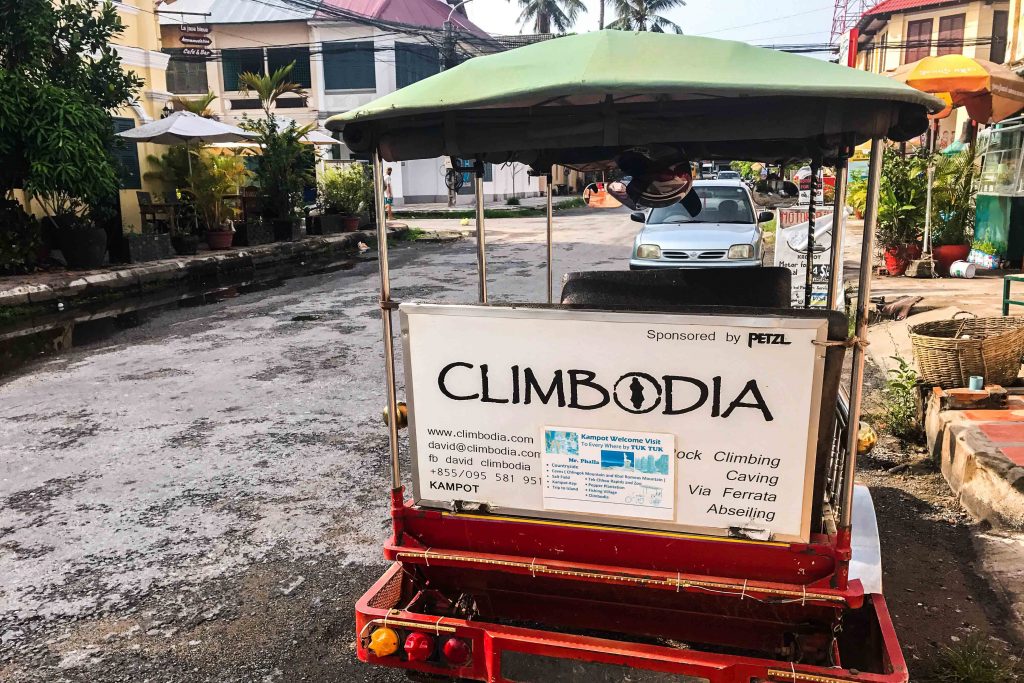 The day before you want to go climbing, head over to Climbodia’s office, a block from the Old Market in Kampot, to sign up. If David, the owner, is around, he might arrange to meet with you that evening to discuss what will be happening the next day and let you ask any questions you might have.

The next morning, a tuk-tuk will take you to the climbing site, twenty minutes outside of town (if you have your own transportation, you can meet the guides out at the site). The climbing site is a solitary limestone formation at Phnom Kbal Romeas, which doesn’t look like much from the bottom – just a rocky hill with a small cave opening in the front. The guides will fit your harness and go over the schedule for the day before you get to climbing. 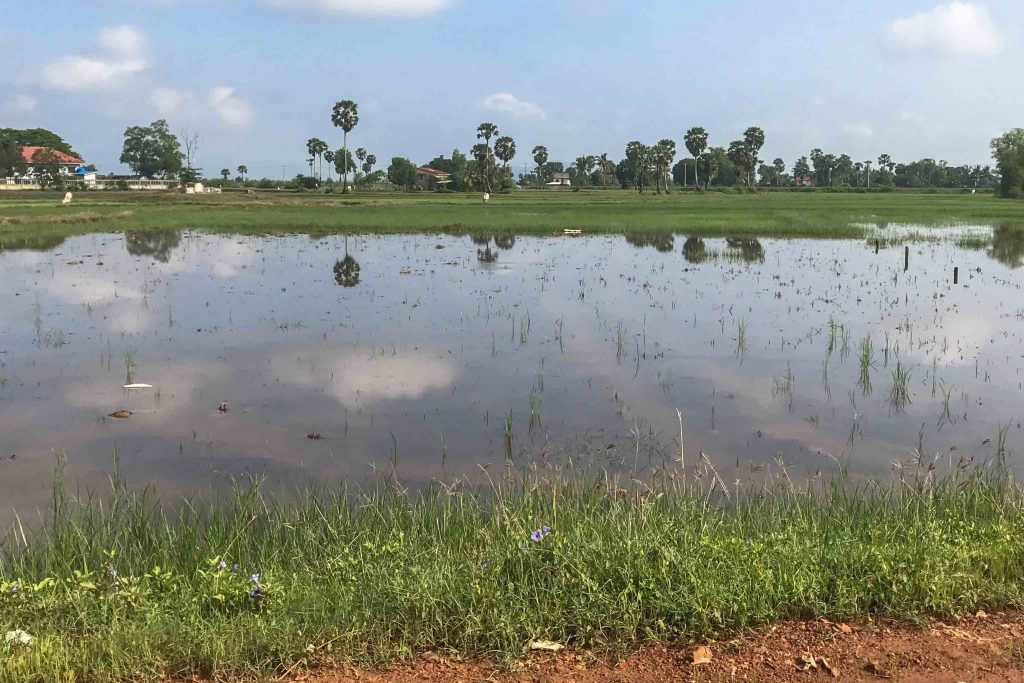 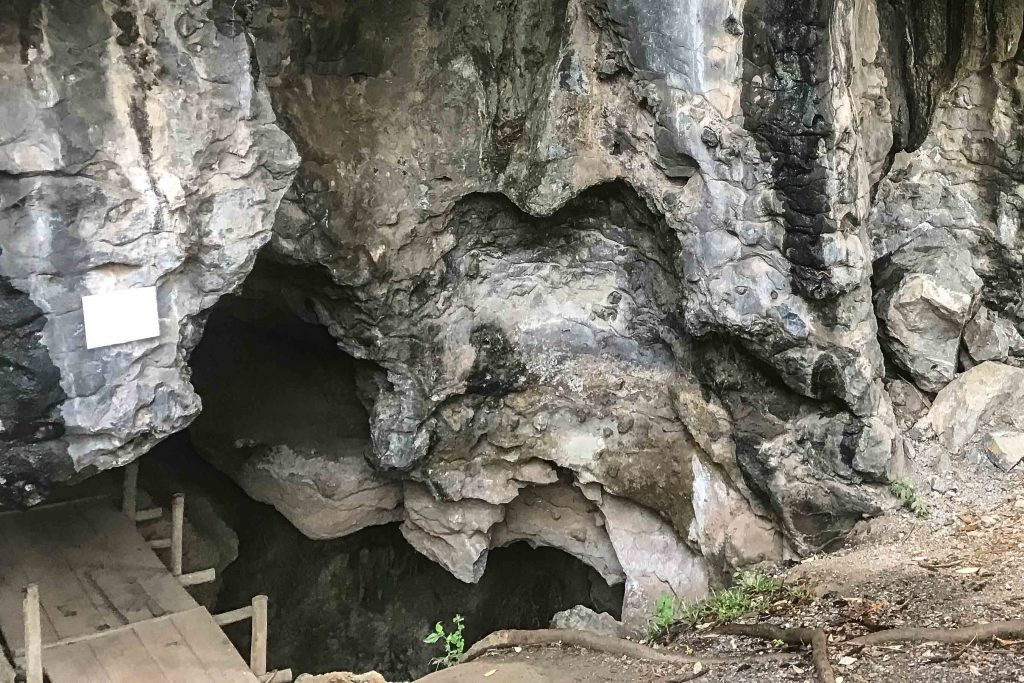 The first climb of the Discovery Tour is the least technical, which makes it a great way to ease into the day, especially for beginners. It’s more of a scramble and only gains around 100 feet of elevation, so it doesn’t take very long.

Though it’s really just a rocky hike that could be done without any equipment, this section is considered top roping because one of the guides will be belaying you. A rope connected to your harness runs up to an anchor point at the top of the climb and then back down to the bottom of the rock face where a guide holds on to the end. If you do fall, it won’t be more than a few feet before the rope catches you.

Having been out of New England for a while and missing my rock scrambles in the White Mountains, I loved this section of the trip. It was something I was familiar with, and I had plenty of confidence in my ability to climb it. Having a belayer was strange, though, because it made me feel like I could sprint up the side of the mountain without having to worry about falling.

Don’t get into too much of a rush, though, since this section has some of the best scenery you’ll see while climbing. Take your time and enjoy the views of the ocean and Phu Quoc Island across the bay. 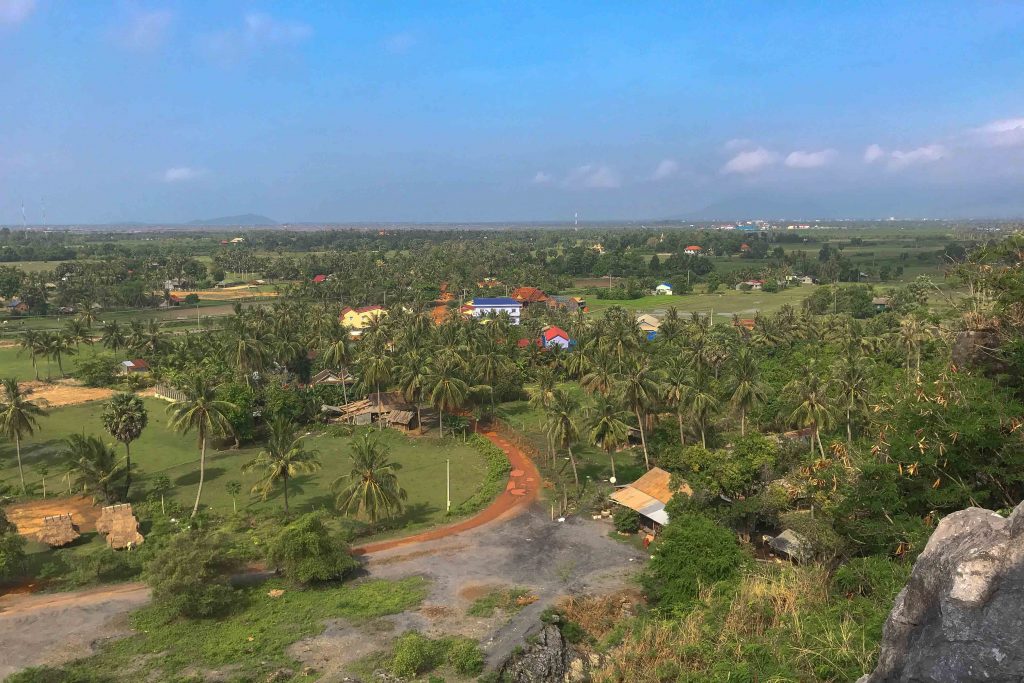 Maybe this is just a sign of my ignorance of the rock climbing world, but I had never even heard of via ferrata before my trip with Climbodia. If you haven’t either, it’s a style of climbing that uses a steel cable that’s anchored into the mountain every dozen or so feet. Participants clip their harness onto the cable and slide along it until they reach the next anchor point and clip onto another cable.

Like a belay rope, the via ferrata cable prevents you from falling too far if you slip. You’ll still fall until your harness clip hits an anchor point (possibly several feet), but fortunately the slope of the terrain is usually gradual enough that falling isn’t too much of a concern.

This style of climbing is less common in the U.S., where installing permanent anchor points on public property is frowned upon. That being said, one of the country’s most popular climbing routes, Yosemite’s Half Dome, can be traversed this way. 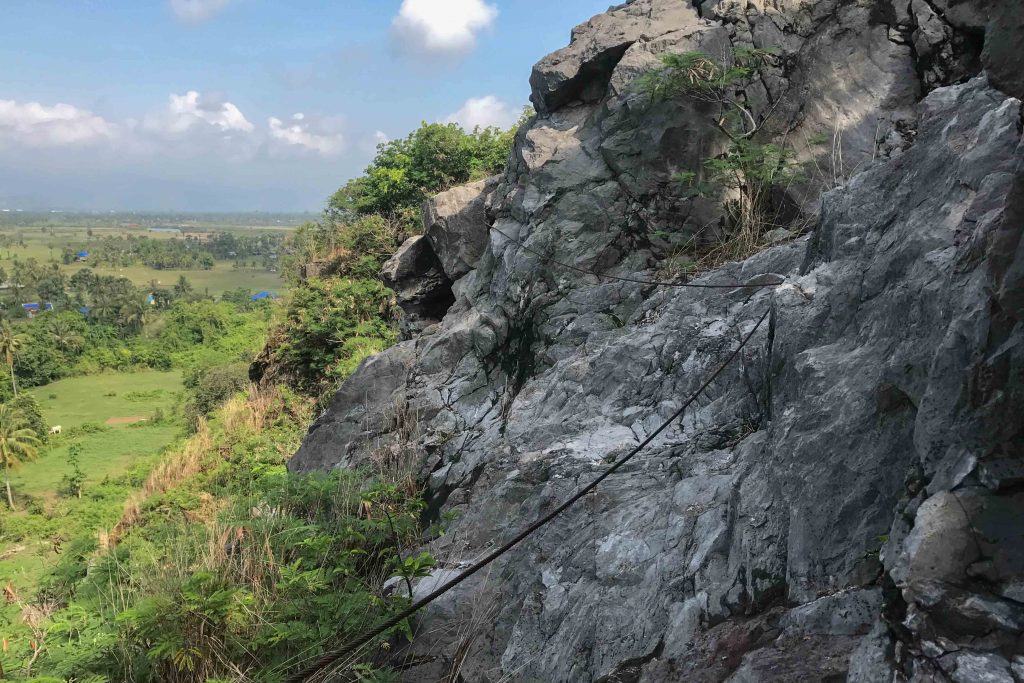 Trying via ferrata was a novel experience, and it was fun being able to do a scramble without any serious risk. Climbodia’s via ferrata route takes a mostly horizontal path for a couple hundred feet across the top of a cliff face.

It’s not particularly hard, but the cable runs through numerous anchors where you need to unclip from one cable and attach to a new one. One carabineer always stays attached, though, so there’s no risk of falling.

This is the only climbing section where you can take your own photos, but the guides will also take pictures so you can get some shots of yourself.

Also known as rappelling, the abseiling section involves descending down a 100-foot-long rock shaft. The first forty feet of it is narrow enough that you can push off the rock while adjusting a friction knot on your harness to lower yourself down. The second half opens up into a wider space where you slide down without even touching the sides. 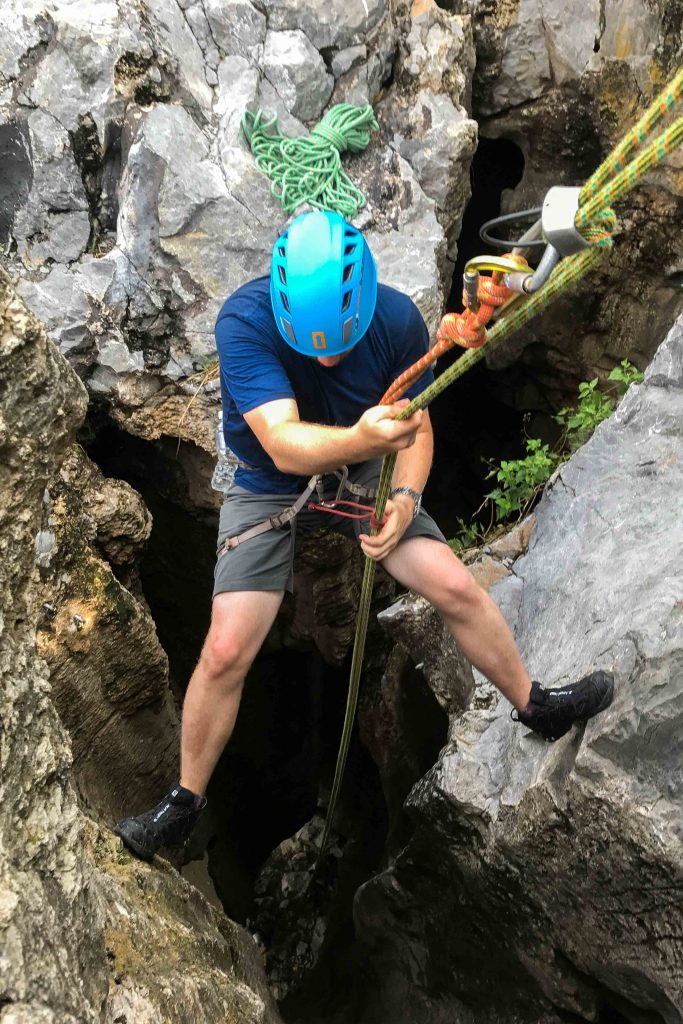 Depending on how much experience you have, this is probably the least interesting section of the Discovery Tour. If you’ve been to a climbing gym (or a real rock face), you know how fun it can be to hop down the wall after a successful ascent.

Unfortunately, it only takes a minute or so to descend down the shaft, and like a little kid on a playground slide, you just want to do it again. That’s not how things work here, though, and it’s time to move on to the caves. 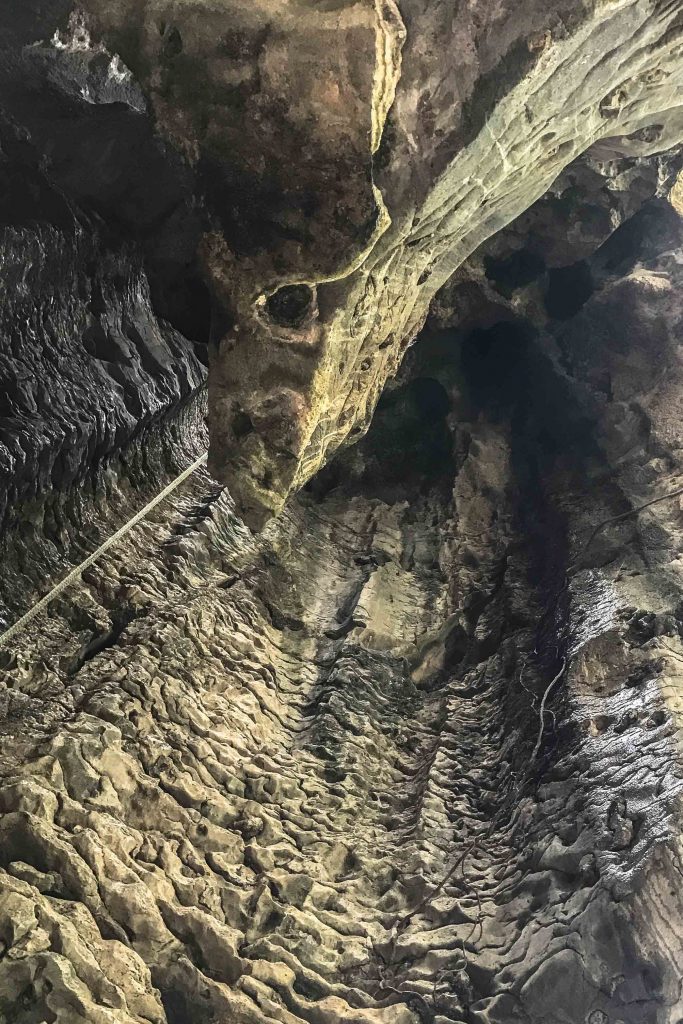 The caving section is actually a fairly leisurely walk through one of Cambodia’s largest limestone caverns. There are no crazy descents down blind shafts or possibilities of being impaled on a stalagmite.

The caves have some fascinating history, too, both as a sacred place for Buddhist worshippers and as a place of refuge during the Khmer Rouge era. Your guide will explain all the history and point out interesting rock features inside the cave, like the hollow wall that can sound like a drum if you strike it with your hand. 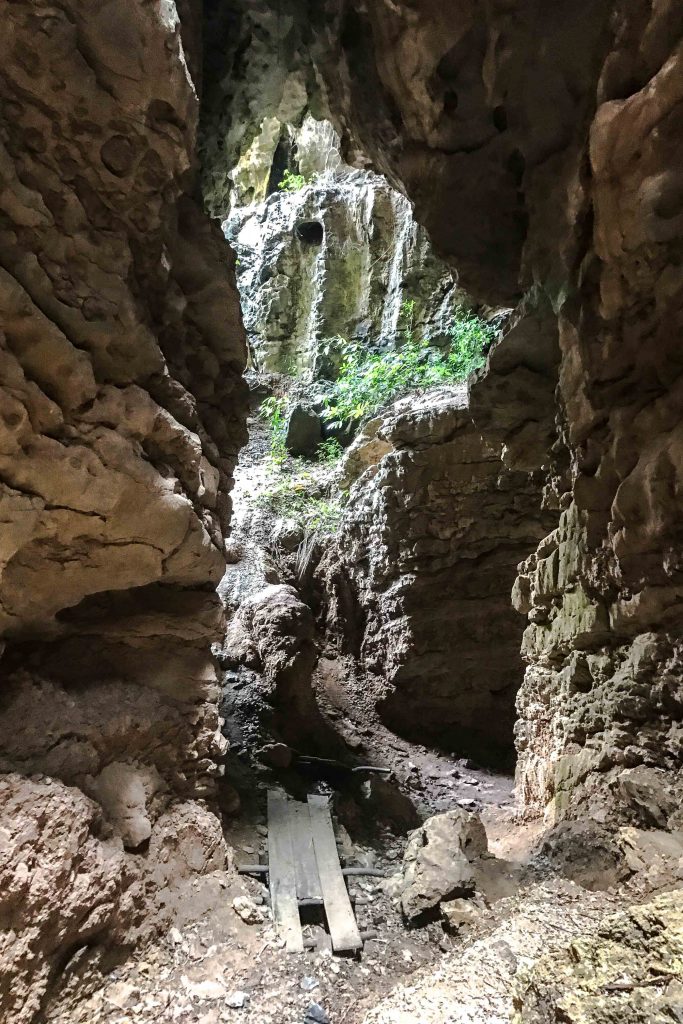 The latter portion of the cave expedition involves another via ferrata scramble along some really slippery rocks. Always check that the foot or handhold you’re using is firm before putting any weight on it. If there’s any loose debris, you could slip, and the razor-sharp rocks can cause some nasty injuries.

While there’s not much rock climbing in this section, it’s a welcome break from Cambodia’s oppressive heat (it must have been twenty degrees cooler inside the cave), and the otherworldly landscapes are captivating. When you finally reach the light at the end of the tunnel, it’s a short walk through some beautiful green pastures back to the main climbing site.

This final section takes up about half of Climbodia’s Discovery Tour and is essentially free time. You have two hours to practice on a series of increasingly difficult rock faces, going as high as you can and climbing as many times as you want.

The rock face is completely vertical here, unlike the scramble/top rope climb at the beginning of the day, and it’s considerably more challenging. You have to place your hands and feet inside cracks in the rock to pull yourself up, and the holds won’t always be obvious. Should you slip (and you inevitably will), the guides will pull the rope tight to stop your fall and ask if you want to come down or just hang there until you feel rested enough to try again.

I only made it onto the first two routes, which were enough to test my climbing skills. I’ve done some indoor climbing before, but I was shockingly bad at it here. I probably should have rented some climbing shoes from Climbodia – my trail running shoes didn’t fit in a couple of footholds the guides were telling me to use. If you’ve got larger feet, climbing shoes are almost a necessity and would be well worth the $5 rental fee. 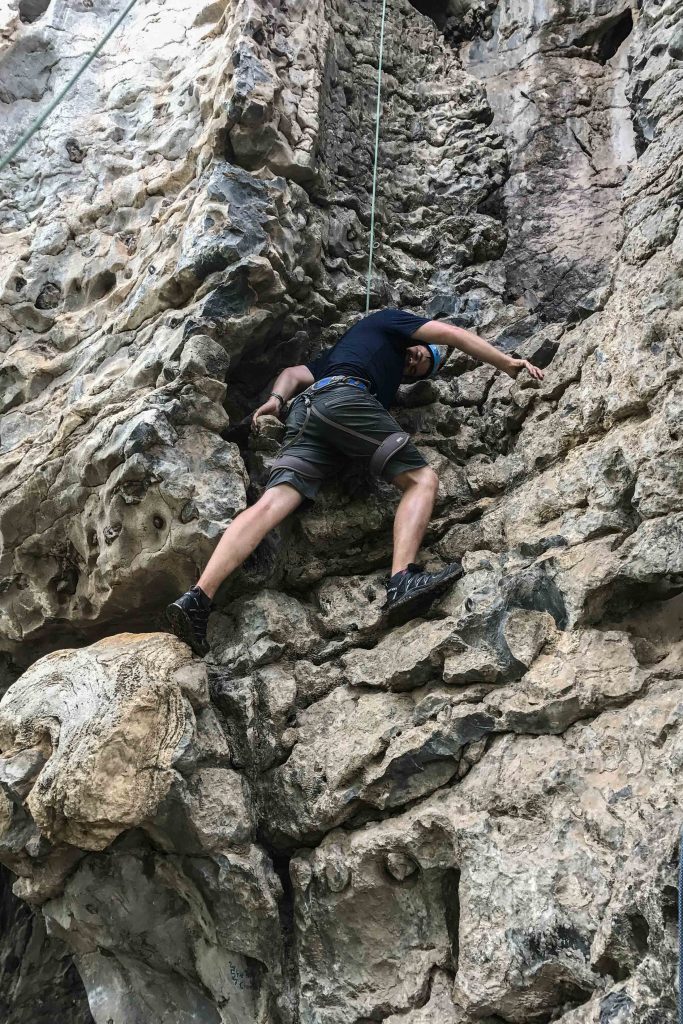 If you’re climbing by yourself like I was and don’t need to take turns with a partner, it can get tiring very quickly. Unless you’re really experienced (or quite physically fit), you’ll probably exhaust yourself before you run out of climbing time.

A Truly Unique Experience in Kampot

While I’m usually opposed to tourists trying out risky activities they wouldn’t normally do because “we’re on vacation, what could go wrong?” (looking at you, everyone who thinks Southeast Asia is a good place to learn to ride a motorcycle), I’d recommend Climbodia to anyone who’s ever had a passing interest in rock climbing.

It’s incredibly safe: the equipment is in good condition, the guides are always there to help, and the terrain isn’t difficult enough to put you in any real danger. If you already have some climbing experience, they also offer courses on lead climbing and rent out gear if you want to climb on your own.

I never would have thought Cambodia would be where I did my first outdoor rock climb, and Climbodia wasn’t even on my radar until after we arrived in town. But being active outdoors is always my favorite way to travel, and getting to learn some new skills and enjoy beautiful views at the same time made this one of my most memorable days there in Kampot. 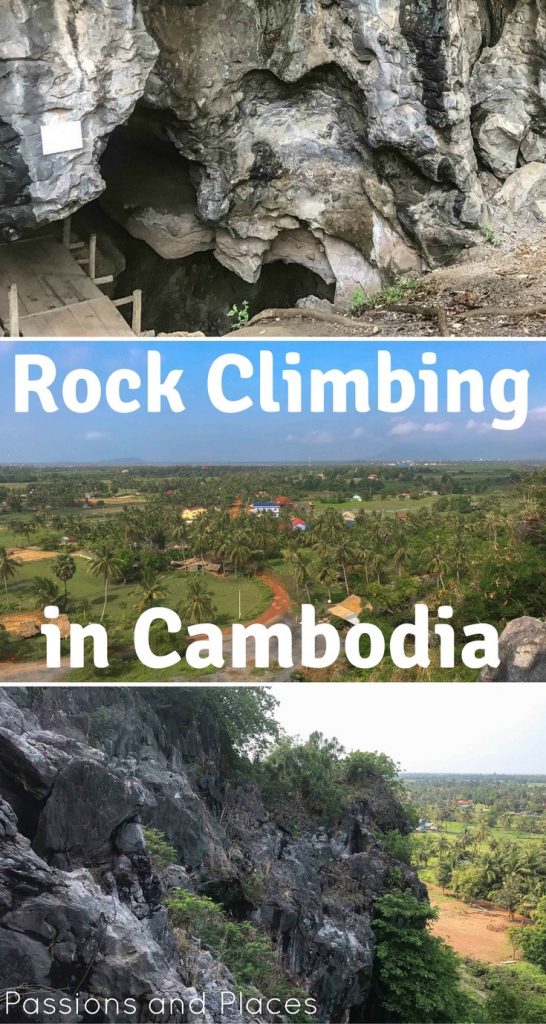 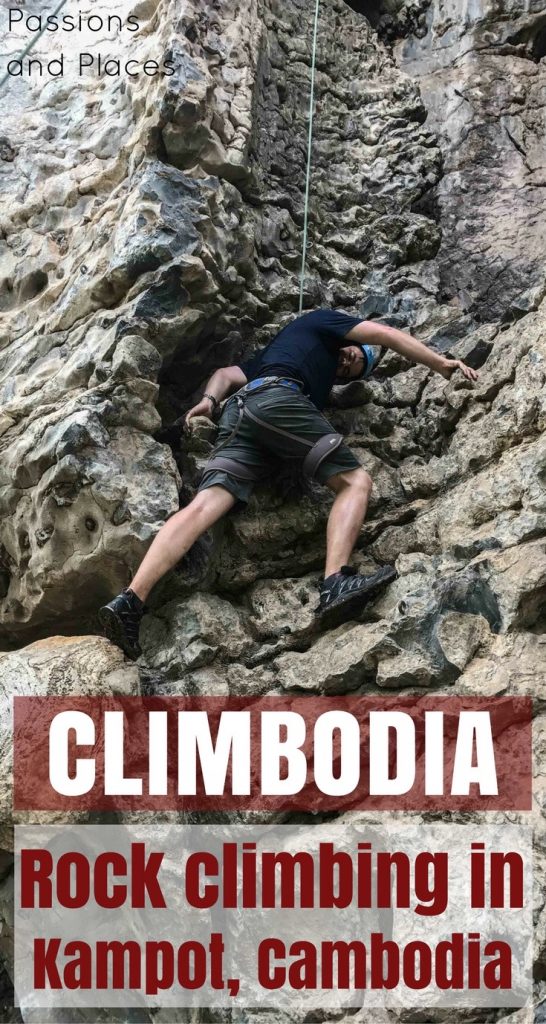