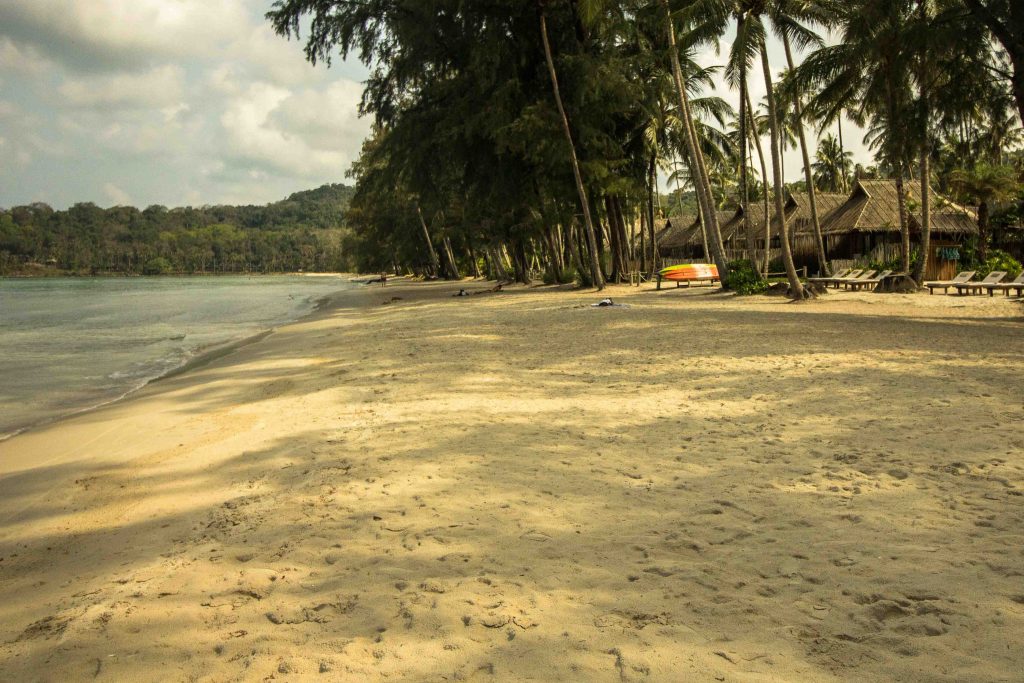 After spending a week apart, Ryan scuba diving on Koh Chang and me at a yoga retreat, we reunited on the little-visited island of Koh Kood, Thailand. Located on the country’s eastern seaboard, it sees relatively few visitors despite being one of the most accessible islands near Bangkok. 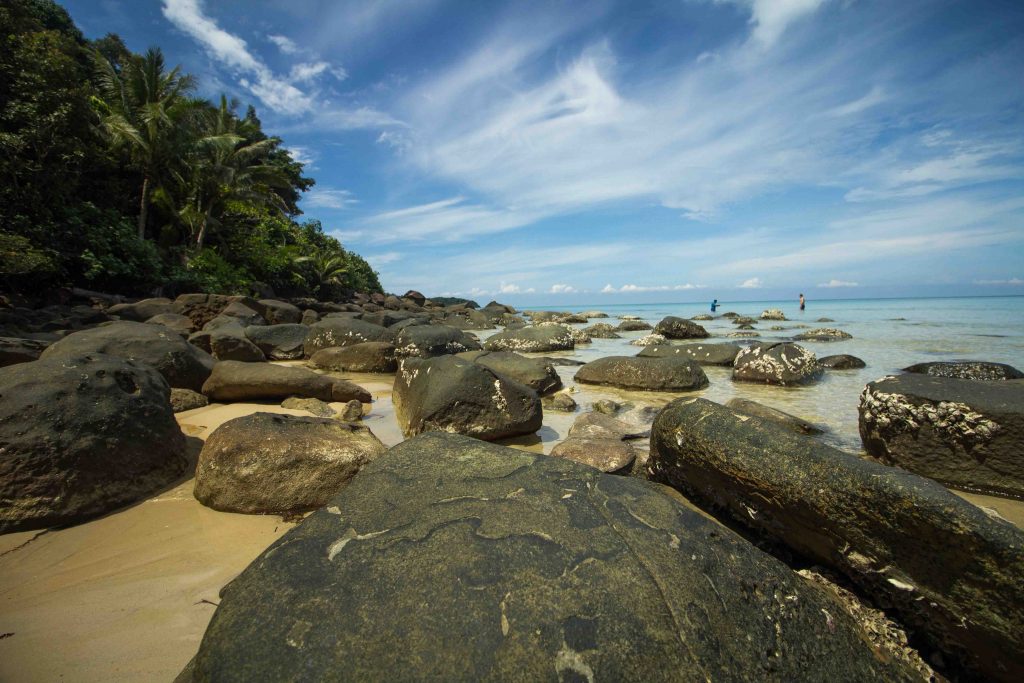 When we started planning our time in Southeast Asia, we imagined visiting one of the quiet islands in Thailand, where we could avoid the crowds and get off the beaten path. We’d been looking for unspoiled beaches, small villages, and local businesses, and when we realized we’d already be near Koh Kood, it was the obvious choice. It lacks a lot of the things many of the top Thai islands have – like raging parties and busy beaches – but its quiet charm is what drew us in, and it didn’t disappoint.

We both had a lot of work to get done that week, so we really didn’t explore the island as fully as we’d have liked to (or spend as much time on the beach as we wanted!). But it was a lovely place to divide our stay between work and fun and get a taste of Thailand off the beaten track.

Unlike in many parts of Thailand, the dirt-cheap backpacker hostels and amazing-value-for-the-money guesthouses are notably lacking on this island. But though Koh Kood hotels cost more than those in other parts of the country, the guesthouse we stayed at was lovely.

The owner of Cozy House runs the place along with his daughter, and they’re both incredibly friendly and helpful and really made us feel welcome during our stay. They even reimbursed us when the motorbike we rented got a flat tire.

We paid 600 baht ($17) for a very basic fan-cooled bungalow (with an almost comically large shower), but the guesthouse offered a lot of extras we loved: a massive and delicious breakfast, free kayaks to use, and a kitchen where we enjoyed being able to do some of our own cooking. And as a totally unexpected bonus that we didn’t even find out about until we’d been there several days, they make you a free dinner if you stay for five nights. It was such a treat! 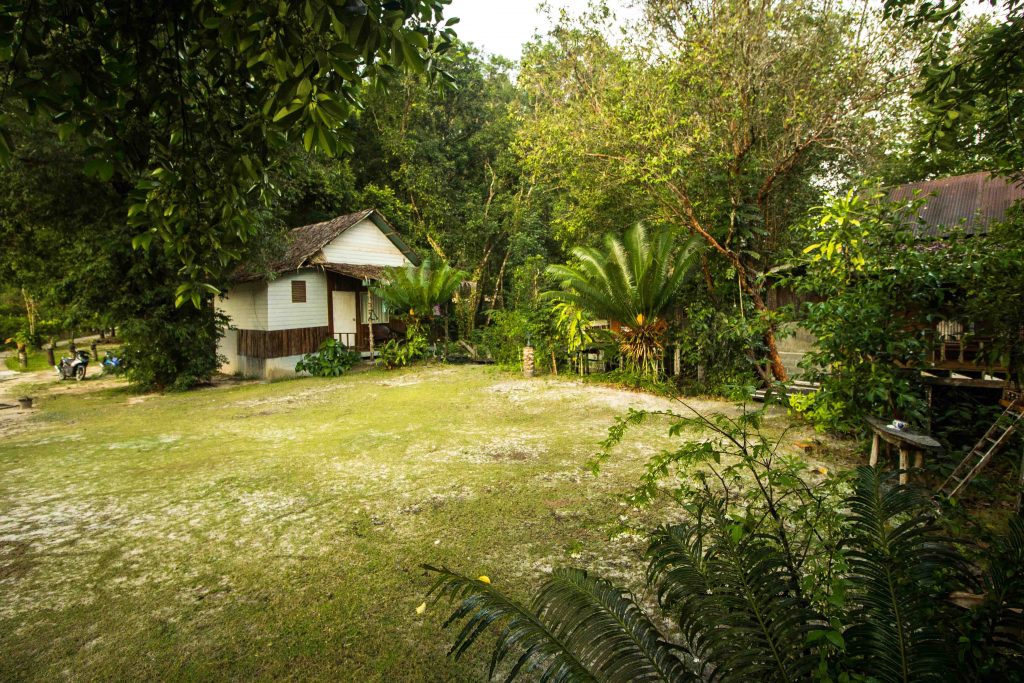 The other thing that made Cozy House great for us was the large patio situated right on the river and across from a mangrove forest. It was the perfect spot for working, and we spent many of our days on the island there. If you have to be looking at a computer screen all day, you really can’t beat that setting for it (even if the other guests who are just there for a relaxing vacation look at you funny). 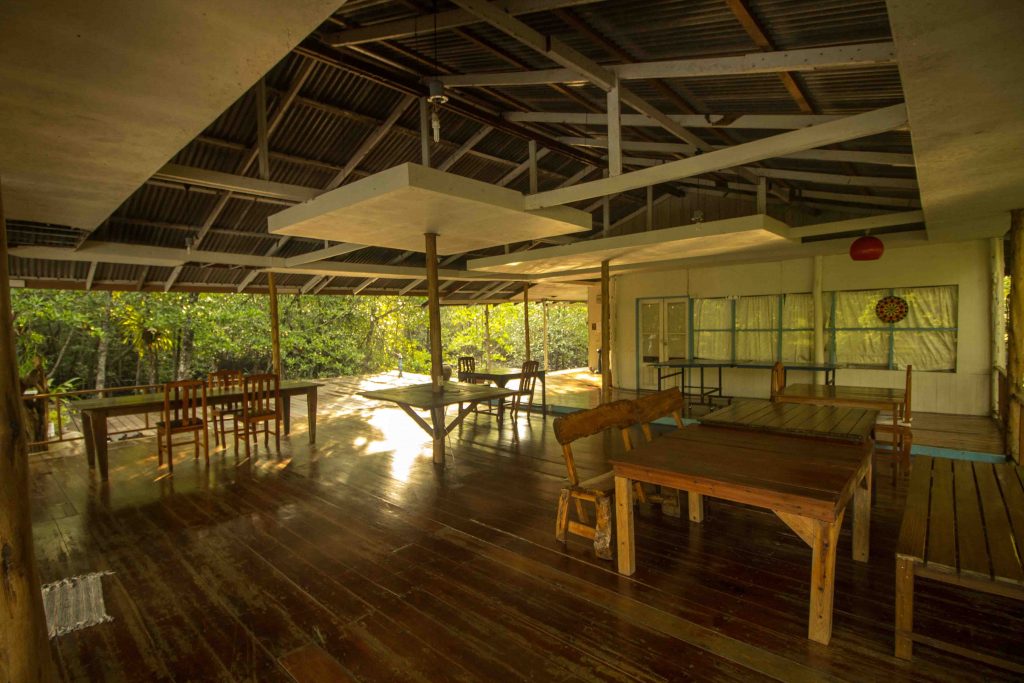 Koh Kood is home to many picturesque settings, and another of our favorites was the View Point Cafe, where you can eat dinner overlooking the beach with your legs dangling down from an over-water boardwalk.

And when we weren’t there, we were often at the just-as-aptly-named Good View Cafe, situated high up on one of Koh Kood’s many hills and in eyesight of some incredibly blue water, or at Sunset Bar, the perfect spot to grab an ice-cold Leo and watch the sun go down. 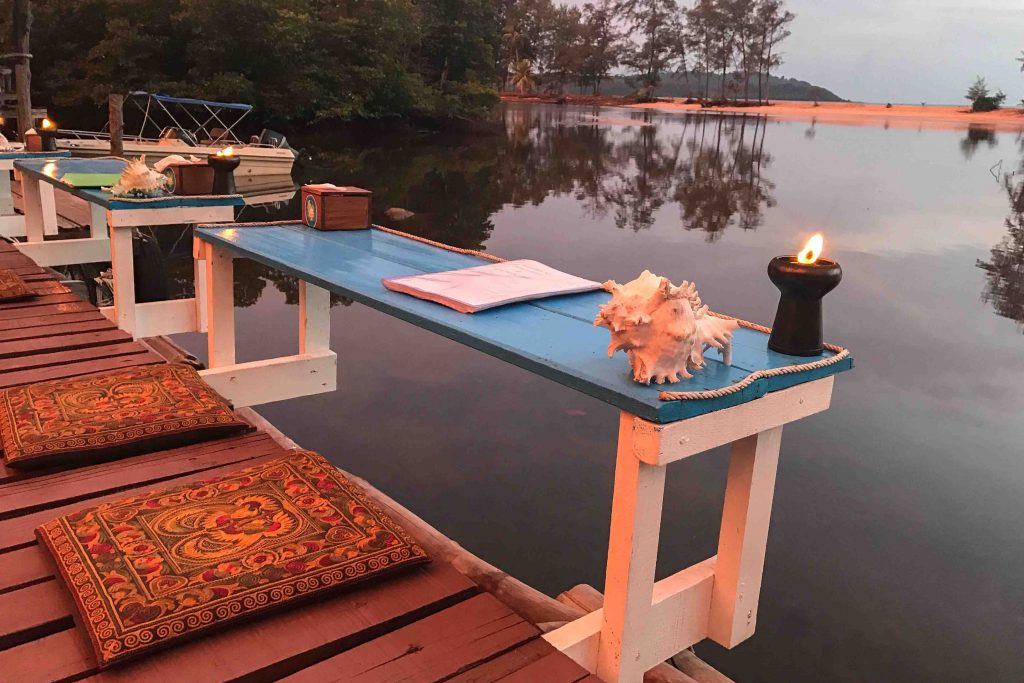 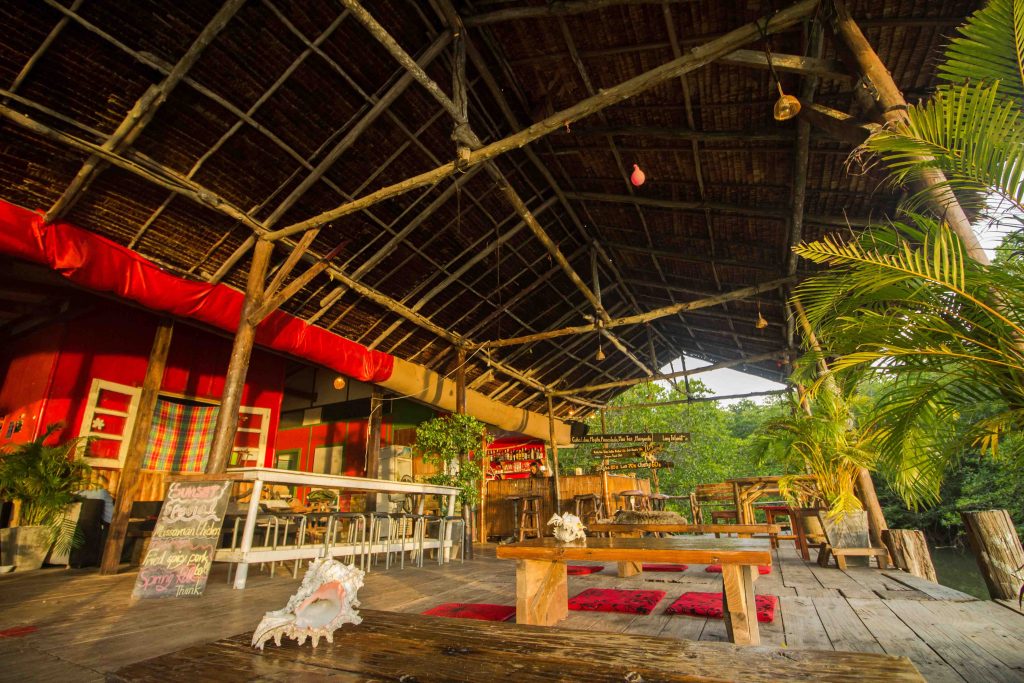 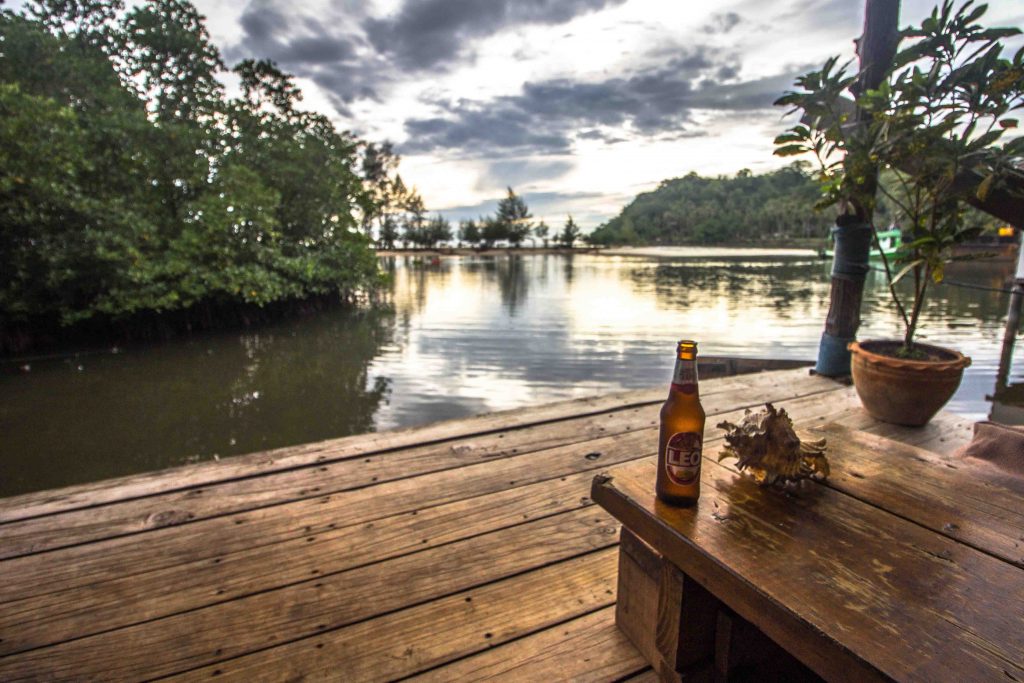 Things to Do on Koh Kood

Even compared to some of the other relatively untouristed islands near Bangkok, Koh Kood doesn’t have a whole lot to do, but that’s really part of its appeal. Unless you’re planning a diving trip with one of the few dive shops around, it’s pretty easy to fill your days there lying on the beach, walking from coffee shop to restaurant to bar, or taking a leisurely paddle along the shore or up the river.

We loved taking our guesthouse’s kayak out on the river early one morning, when nobody else was on the water, and paddling along the edge of the mangrove forest. The waters were calm, and we were able to paddle upstream for a half hour before it got too shallow. Going in the other direction, the ocean is only ten minutes away. There’s very little current and even less boat traffic, so it’s a great place to explore if you’re new to kayaking. 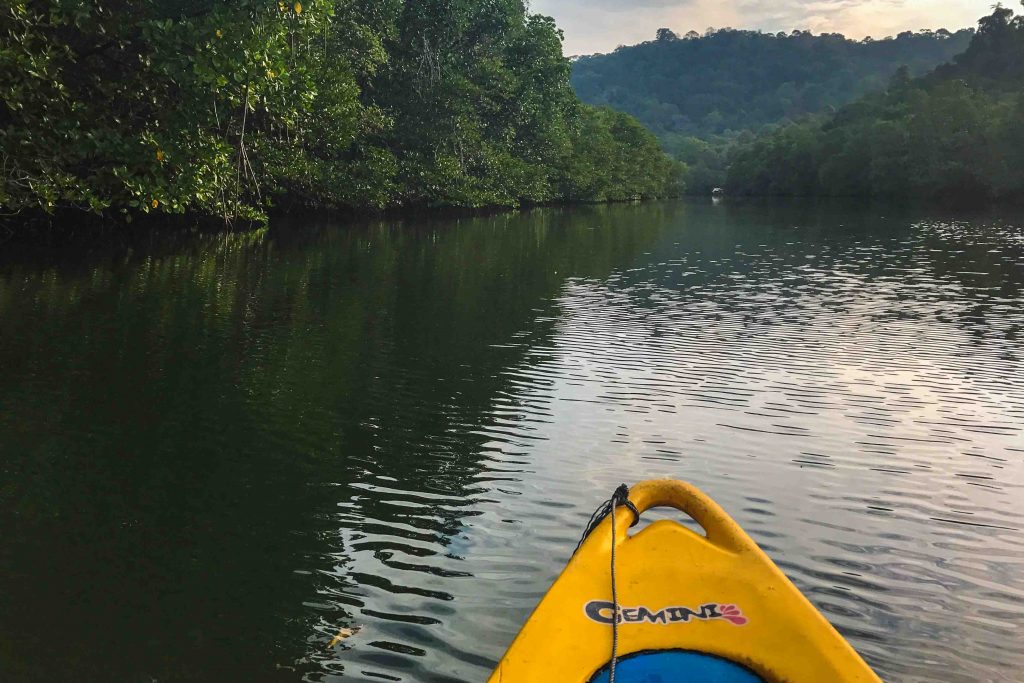 Motorbiking Around the Island

Because Koh Kood is super hilly, pretty large, and sparsely populated, renting a motorbike is really the only way to get around. Riding around to explore the island’s jungly interior and far-away corners was one of the highlights of our time there. Since there’s so little development on the island, it’s often just you on your bike, riding through the jungle.

But if you want an actual destination to seek out, one of the island’s main inland attractions is The Giant Trees, also known as The Old Trees – there are even signs pointing the way. The road leading to them can be challenging to navigate, though, and it’s pretty isolated. If your bike gets a flat tire, it might be a while before you can get help.

We weren’t really sure what to expect, but trees that huge and complex were fascinating to see. Despite their size, they seamlessly blend into the jungle, and without the well-marked trail, it would be hard to even notice them. The trees are so big and the jungle is so dense that it’s hard to really take them in and even harder to capture their enormity. 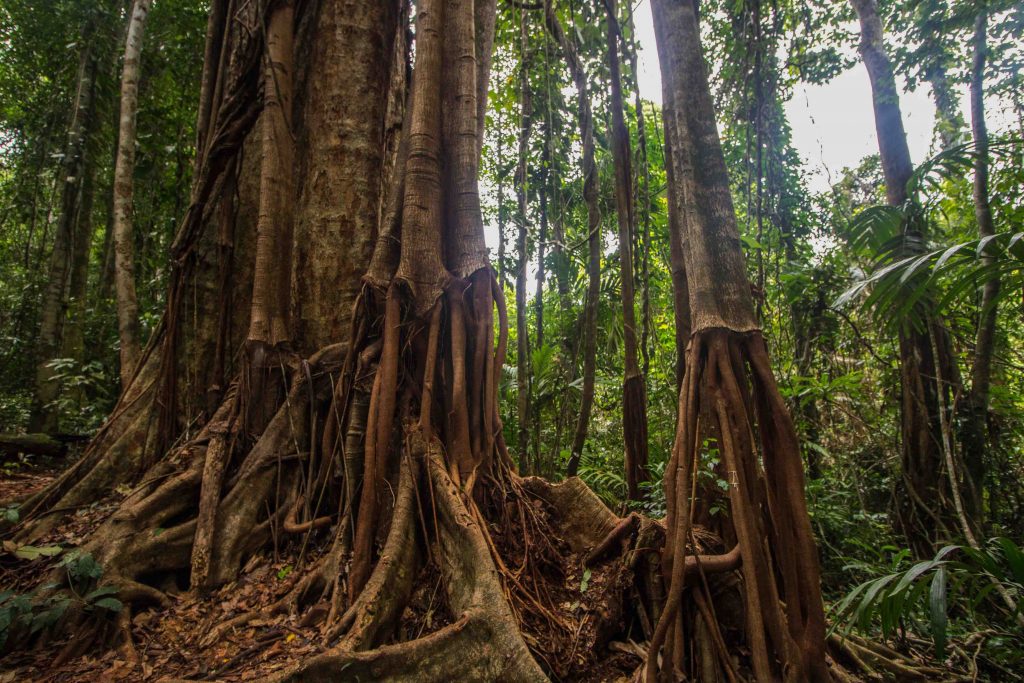 Koh Kood’s three waterfalls are also popular spots to ride to. Located near the Giant Trees is one called the Secret Waterfall. You have to love the simple, descriptive naming conventions on this island, although that waterfall isn’t so secret anymore. It does require a more challenging ride than the other two, though, so it doesn’t get quite as many visitors.

My best memory of visiting the waterfalls is definitely watching Ryan flail on a dilapidated swing that someone hung over the water at one of them (which unfortunately I didn’t get a good picture of). 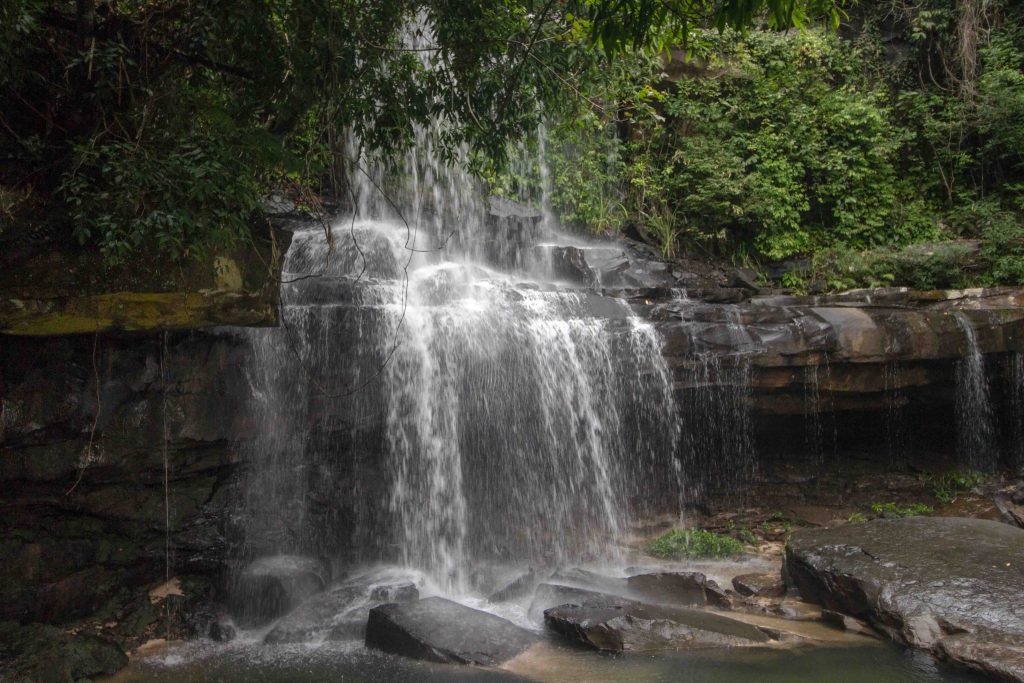 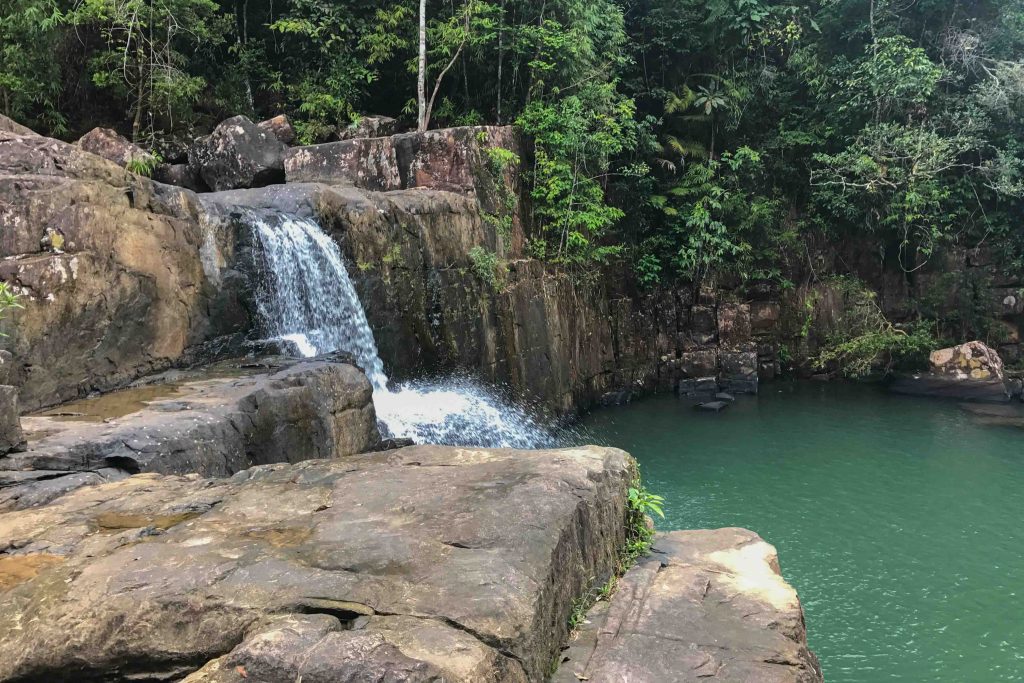 We also visited one of the original settlements on Koh Kood, the tiny fishing village of Ban Ao Yai on the island’s southeastern edge. The 40-minute journey across the island to the village took us through lots of jungle and past some of the rubber plantations that dot many of the islands near Bangkok.

Even though there are just a few main roads crisscrossing the island and signs pointing the way to the village, there are also quite a few turn-offs. On a couple occasions, we found ourselves riding down roads that quickly became teeny paths through desolate bunches of coconut trees, where the few signs were all, for whatever reason, written in Russian.

We eventually arrived in Ban Ao Yai, and it’s really the one place in Koh Kood where you can get a sense of the local culture and traditional way of life. Until about twenty years ago, there was no tourism on the island, and it was almost completely undeveloped. There was very little local population, save for a couple small villages, where people made (and still make) their living by fishing and farming coconut and rubber trees.

The village is made up of stilted boardwalks that jut out into the ocean, and very basic homes are interspersed between small shops and restaurants. You can also see the catch of the day in all its fishy glory here. Restaurants display crabs and eels jostling around in buckets, hoping to entice customers with their freshness. We settled on some sodas at one of the restaurants to give us some time to take in the atmosphere, no fishy meal required. 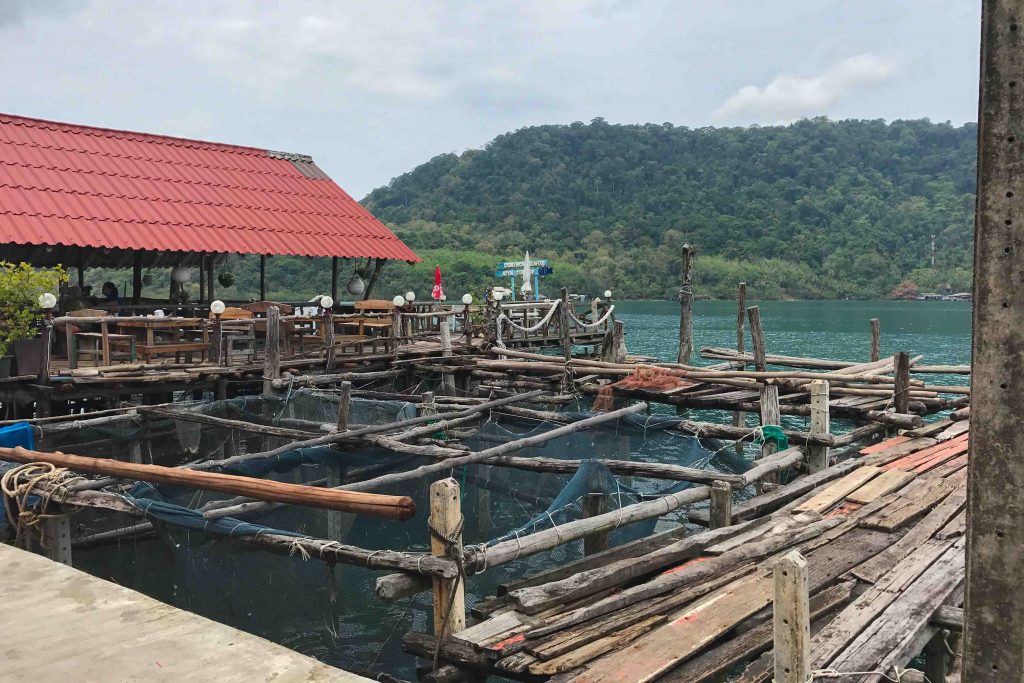 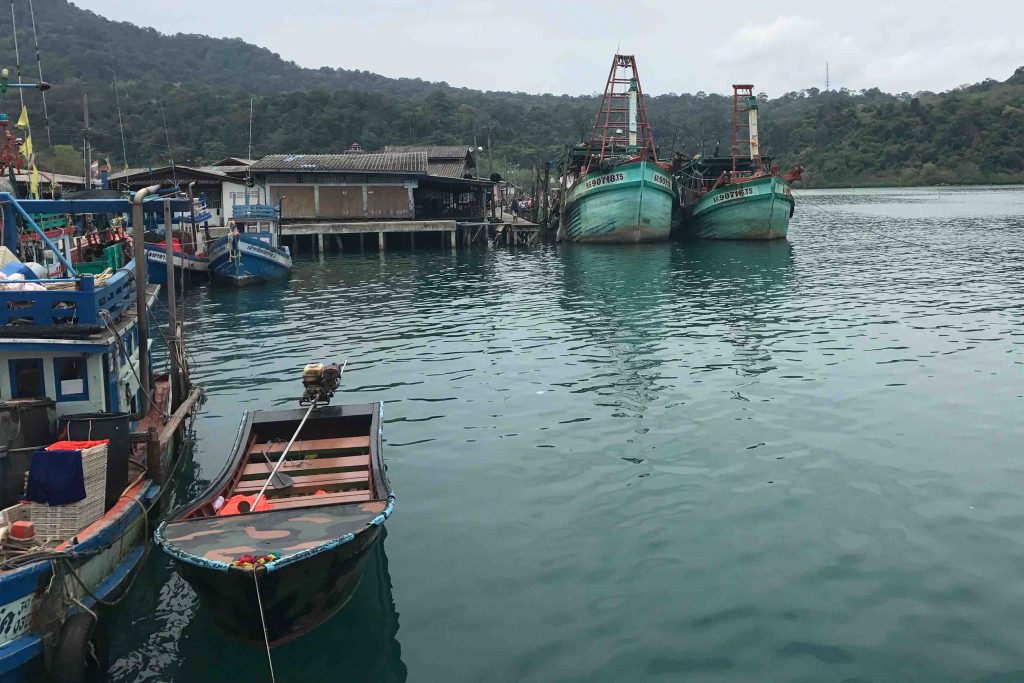 And despite the fact that Koh Kood is one of the less developed Thai islands and a place that few people have heard of… Maybe you’ve seen that viral video about a restaurant where the tables are in treehouses and the food is delivered by zipline. Yeah, that restaurant is on Koh Kood – but don’t think you’re going to be eating there.

What the video doesn’t tell you is that it’s part of one of the most exclusive resorts in Southeast Asia, Soneva Kiri, and it is only for guests – guests who pay between $1,200 and $8,000 per night for the privilege of staying there.

Fortunately, as we found out, Koh Kood has plenty to offer travelers on a more modest budget. If you want to get off the beaten path and just relax on one of the quiet islands in Thailand, you can’t go wrong here. 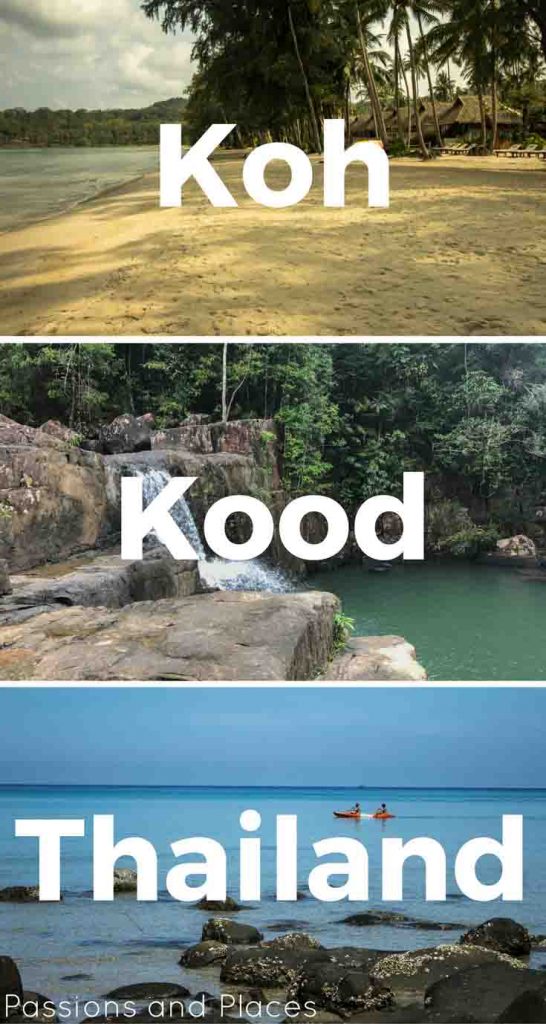 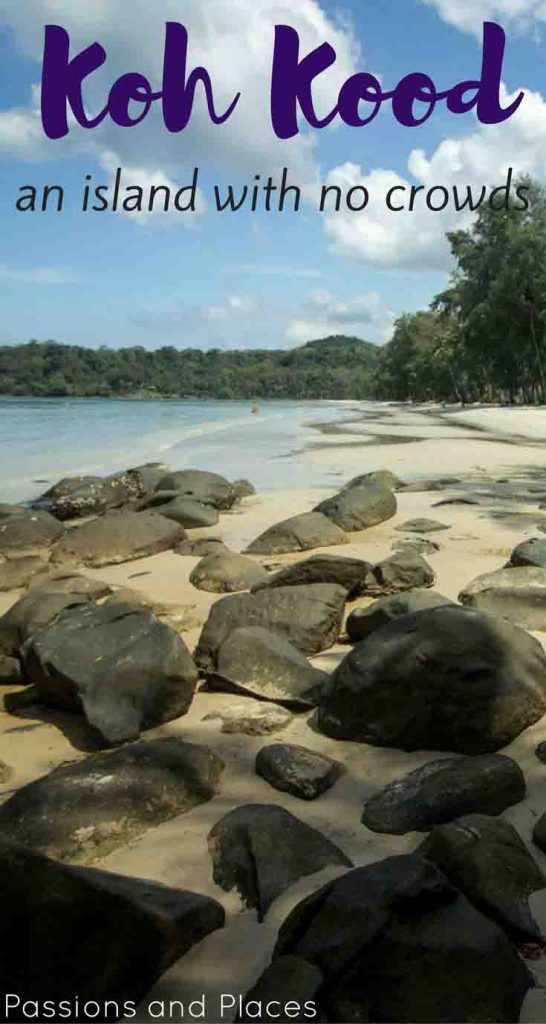