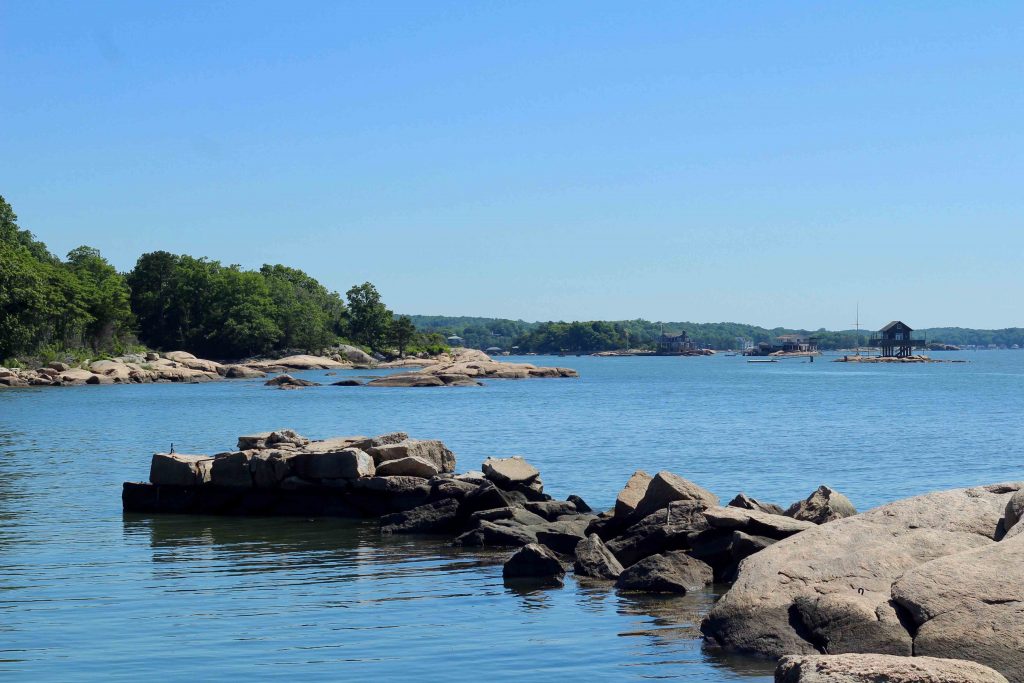 When it comes to sea kayaking in New England, it’s hard to beat Boston Harbor, with its rich history and easy access from the city. But if you’re looking for a change of scenery or something more remote, there are plenty of great options.

These three spots are some of my favorite destinations for kayaking in New England. (Bonus: They’re all within two hours of Boston, and all have kayak rentals during the summer if you don’t have your own.)

The Casco Bay Islands sit just a mile off the coast of Portland, ME. There are so many islands you could easily do a multi-day kayaking tour here. For now, I’m just focusing on a simple day trip that visits three of the islands.

If you need to rent a kayak, you can pick one up from Portland Paddle and launch from the Eastern Promenade Park (about a quarter-mile from downtown). Otherwise, the best place to start this paddle is Bug Light in South Portland, which has plenty of parking and a concrete boat ramp for easy launching.

Plus, you get to visit a tiny lighthouse; by New England standards, Bug Light is quite small at 30 feet tall. But it was built back in 1855, and the city has made great efforts to restore it to its former glory while also constructing a beautiful park around it. 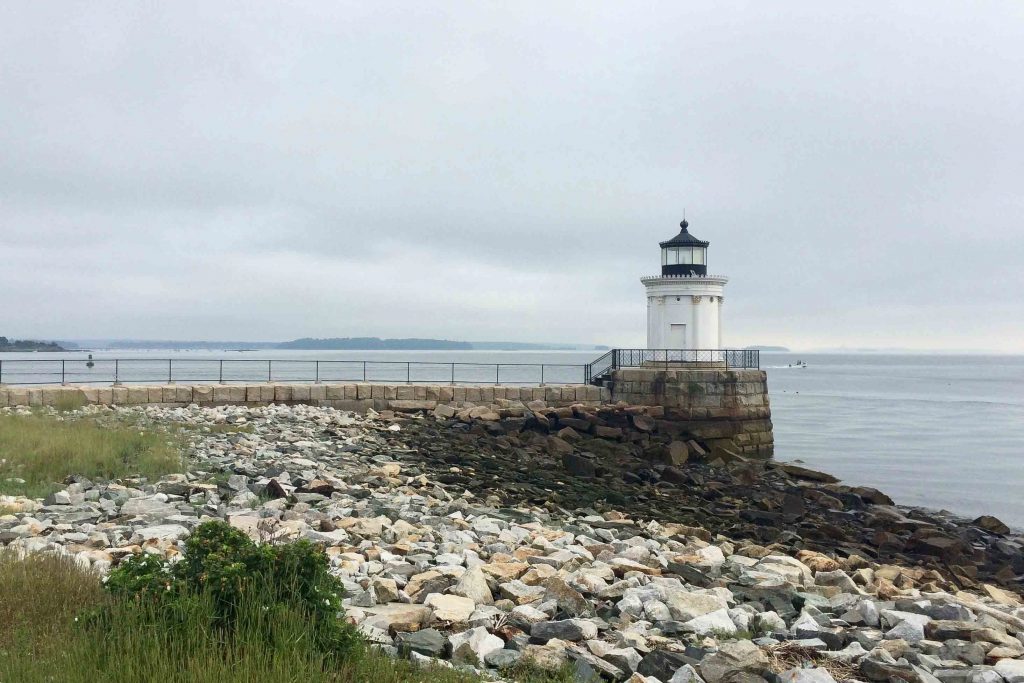 The first stop on a tour of the islands should definitely be Fort Gorges on Hog Island. Its walls rise straight up out of the ocean, and there’s only a small gravel bar on the western edge to pull your kayak ashore.

You can explore the entirety of the fort – from the central parade grounds to the second-story casements that previously held the fort’s cannons (one of which can still be found along the top of the fort). The interior of the fort and its stairwells can be quite dark, so bring a flashlight.

You’ll most likely have the place to yourself, as the ferry from Portland doesn’t stop on Hog Island, though a few companies run (pricey) tours there. 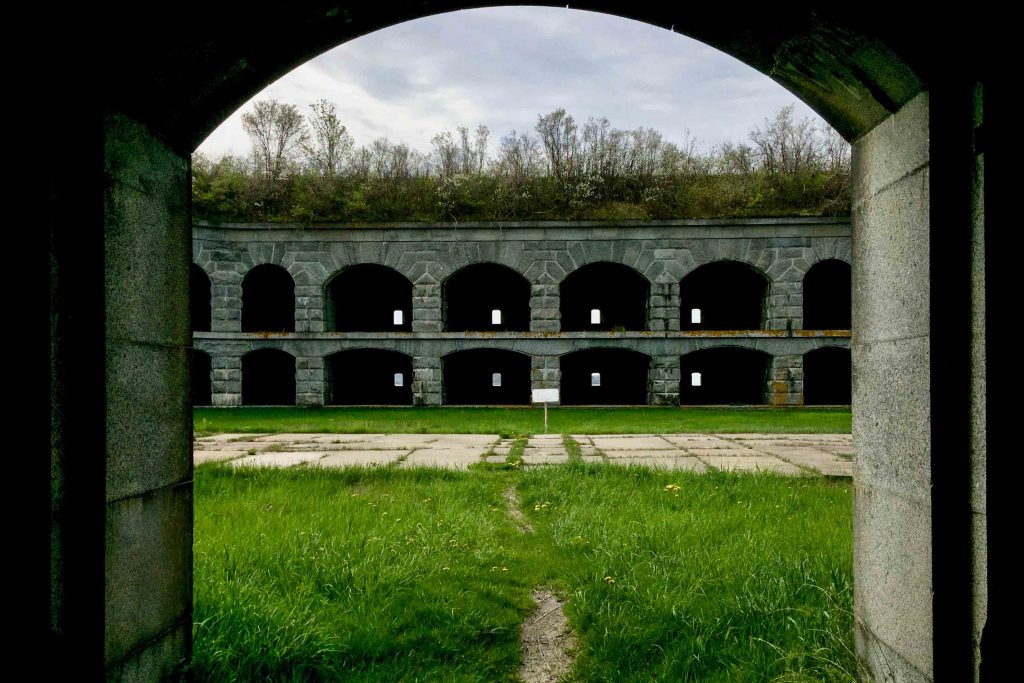 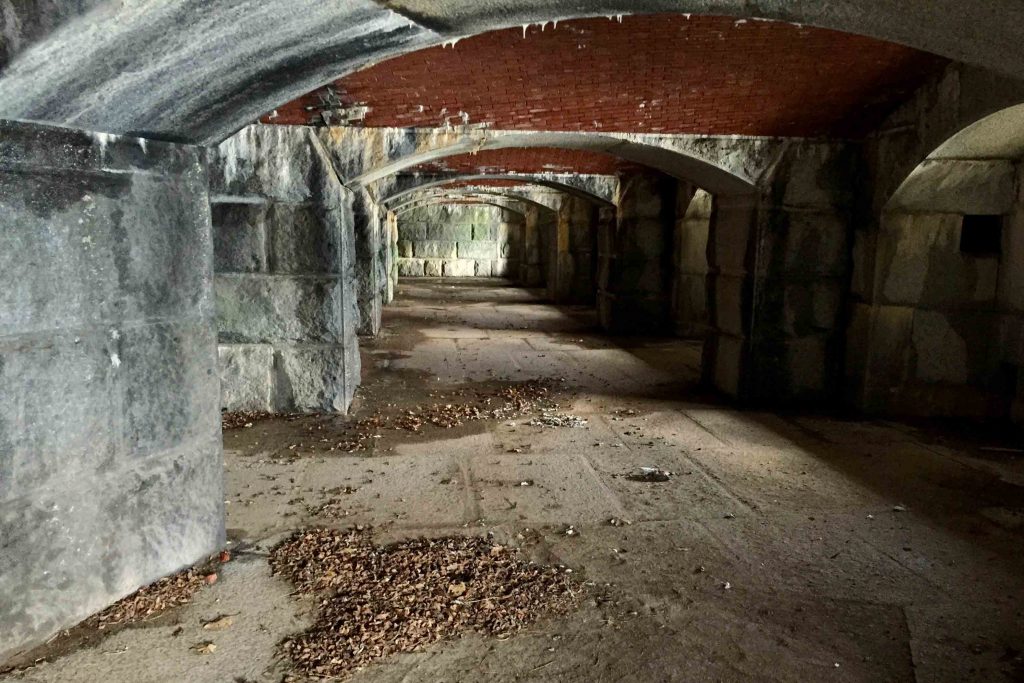 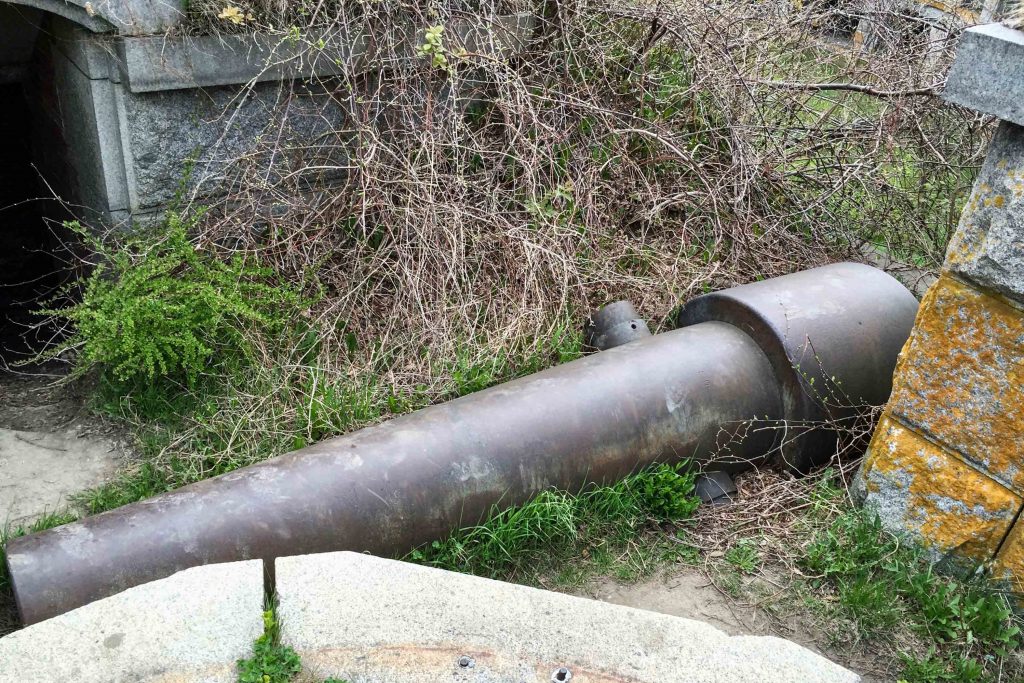 Visit the next island in the harbor, Great Diamond Island, if you’re hungry or in need of supplies. Great Diamond is one of the main jumping-off points for exploring Casco Bay, as it’s where the ferry drops off and has the largest population center in the area.

However, the island is almost entirely private. The only location open to visitors is Diamond Cove on the northeastern end. You can stop at Diamond’s Edge Restaurant for a fantastic meal – it feels a bit on the extravagant side for those arriving in kayaking clothes, but you can call ahead to make arrangements for your boat while dining.

If you’re looking for something less upmarket, there’s also the Diamond Cove General Store, which is open from Memorial Day through Columbus Day and has pizza, ice cream, and groceries. 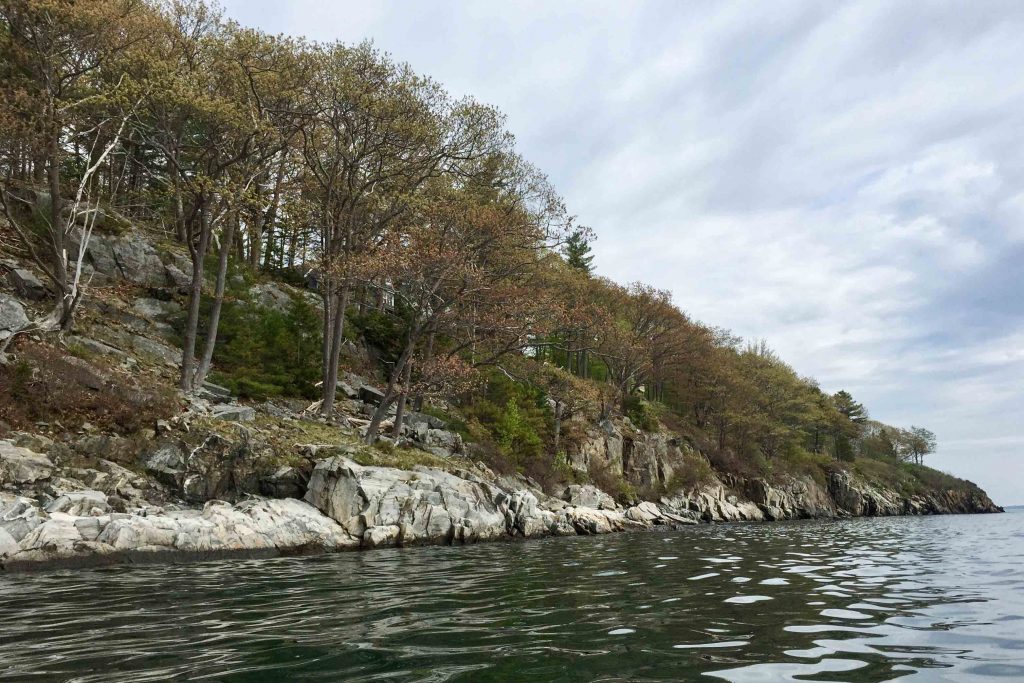 Cow Island is the last stop on the tour of Casco Bay, and it’s one of the few islands in the harbor where you can spend the night. The island is owned by Rippleffect, a non-profit organization that works with kids and runs a summer camp on the island.

However, the western side of the island is open to the public and has a few campsites, which include a space to set up a few tents, access to Rippleffect’s two composting toilets, and (in the case of one of the sites) a really nice swing and hammock. You can reserve a campsite by calling or emailing Rippleffect (they’re popular, so make sure to reserve in advance). 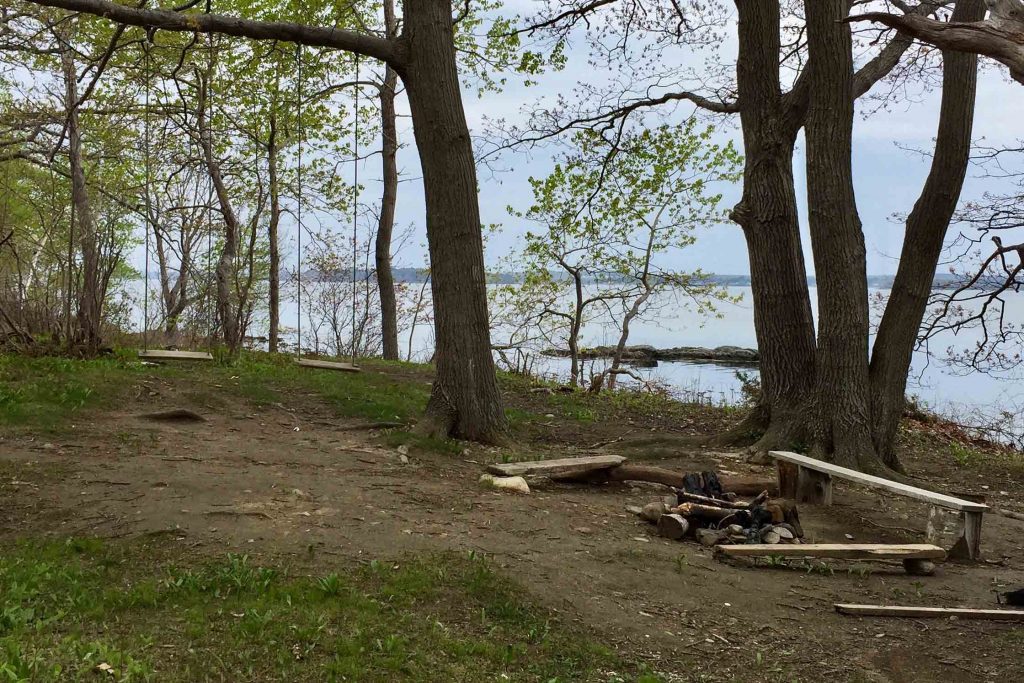 It can be a real (and potentially dangerous) struggle if you end up paddling against the current. Check tide tables the day before your trip, and ensure you’ll be paddling with the tide or at least during slack tide. That being said, Portsmouth Harbor is a beautiful paddle full of interesting sites if you plan your trip carefully.

If you don’t own a kayak, you can rent one from Portsmouth Kayak Adventures, which sits in the calm waters of Sagamore Creek, giving you a chance to ease into the currents of the harbor. If you do have your own boat, the best place to put in for a journey through Portsmouth Harbor is at Odiorne Point State Park ($4 admission), four miles southeast of downtown Portsmouth. There’s quite a bit of parking and a convenient beach for launching.

The first place worth visiting in the harbor is Wood Island, a mile and a half across the mouth of the Piscataqua River. Along the way, you’ll have some nice views of Whaleback Light, an ancient-looking lighthouse (it was built over 140 years ago) that is still operational.

On Wood Island sits the Wood Island Life Saving Station. The rocky coast of Maine and New Hampshire resulted in many shipwrecks up until the mid-1900s, necessitating the construction of a Coast Guard base for rescue operations. The station is currently being renovated and turned into a museum of maritime history.

In past years, it was possible to disembark on the island and look around the ruins of the base, but now that it’s an active construction site, it’s best to stay in your boat. 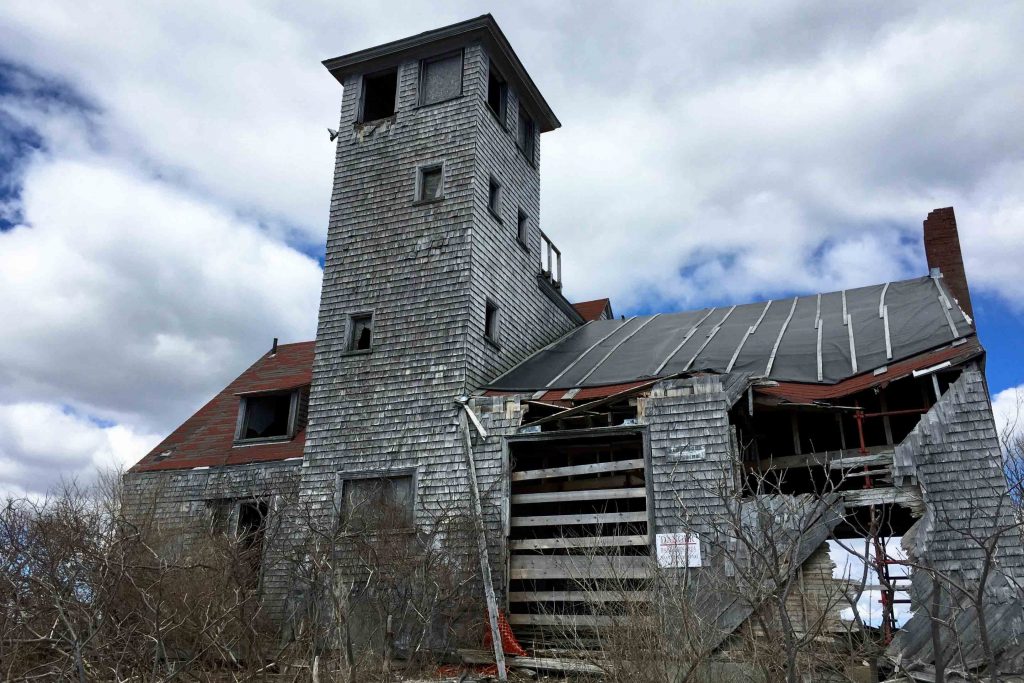 A little over a half-mile upriver, Portsmouth Harbor Lighthouse and Fort Constitution jut out into the river from the town of New Castle. Not much remains of Fort Constitution besides a crumbling outer wall, but it’s open year-round and you can beach your kayak on the sandy shore just to its north.

Portsmouth Harbor Lighthouse sits right outside the walls of the fort and is still functional. It’s open to the public for a few days each summer. 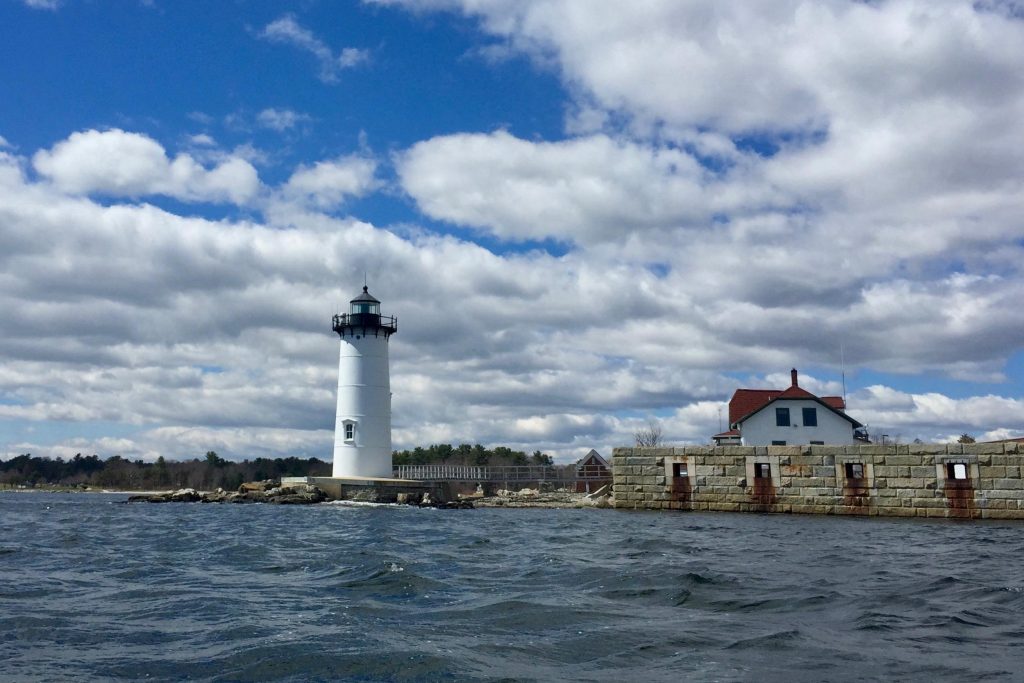 As you paddle just a bit further upstream, you’ll notice an absolutely massive building along the Maine side of the river. This is the Portsmouth Naval Prison, which was locally referred to as “The Castle” (and it’s not too hard to see why).

The building served as one of the primary correctional facilities for inmates from the Navy and Marines until the mid-1970s. Those strong tidal currents that can make kayaking the river so difficult were considered a deterrent to inmates’ escapes.

While it looks like an amazing site for some urban exploration, there’s unfortunately no way to explore the prison, as it’s located on an active naval base and has been sealed off from the public. You might end up in a different prison if you try to enter this one. 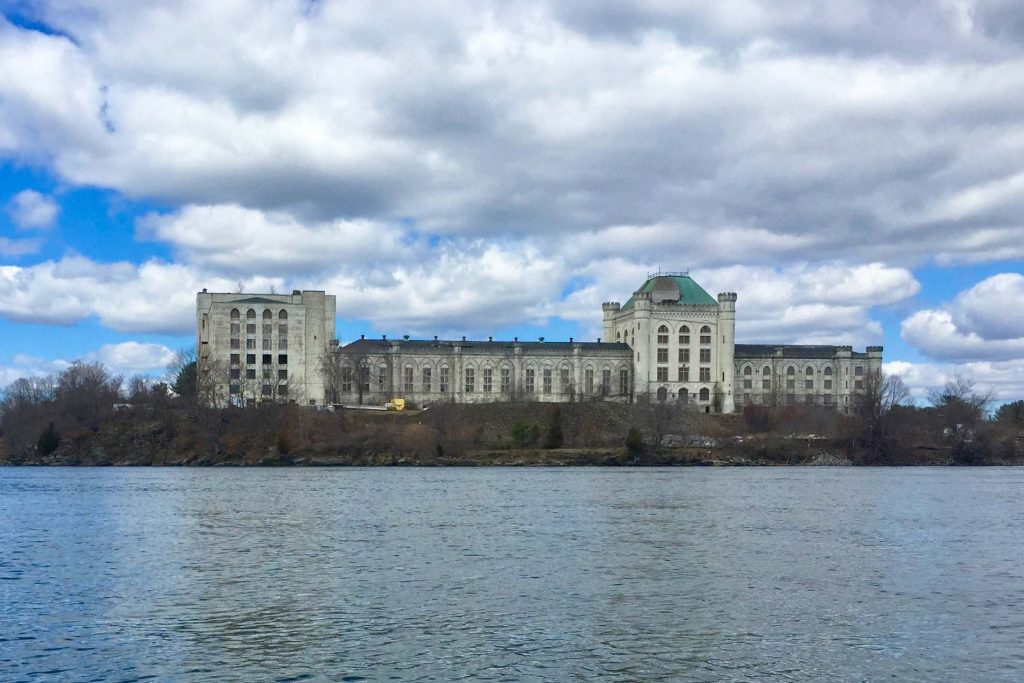 One of the most exciting aspects of visiting Portland Harbor is just seeing what a working harbor looks like. The town was built around the harbor, and all its history centers on the water.

In Boston Harbor, you can watch massive cargo ships and occasionally a cruise vessel enter the city’s waters, but it’s not quite the same as seeing small-scale happenings like the offloading of lobster traps and fishing boats and the raising and lowering of bridges in Portsmouth.

One of the best places to sit back and watch all this activity is the park on Four Tree Island in the middle of the river. There’s a pedestrian walkway that leads to downtown Portsmouth, too. 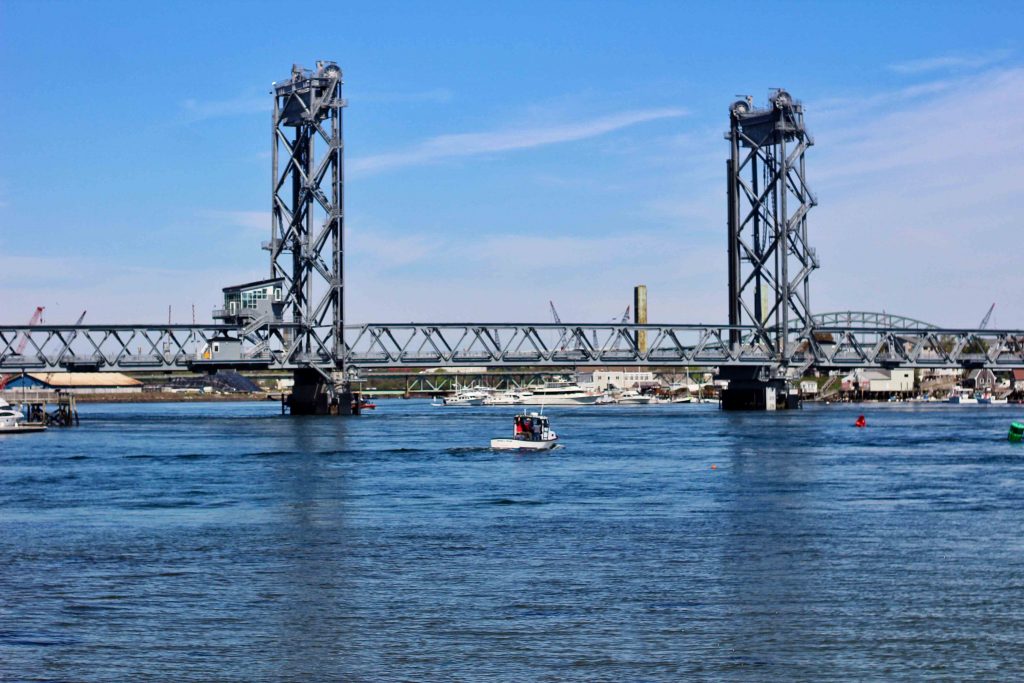 While New England’s southern waters are often neglected in favor of the rugged coastline in Maine and New Hampshire, Connecticut has some breathtaking paddling routes that easily rival its neighbors to the north. The Thimble Islands off the coast of Branford, CT, is just one of these areas. Located in Long Island Sound, the islands are only a two-hour drive from Boston or NYC.

The islands themselves are sculpted from awe-inspiring pink granite that seems to just erupt from the ocean floor. This granite was considered so beautiful it was quarried to build the base of the Statue of Liberty, the Brooklyn Bridge, Grand Central Terminal, and Columbia University.

If you’re renting a kayak, head over to Branford River Paddlesports, and then you’ll need to transport your boat to the launch site. The best place to launch for an excursion through the islands is right in front of the Branford Post Office on Thimble Island Road, where there’s a concrete boat ramp and a nice grassy area for unloading gear (or setting up your kayak if you have a folding one like me).

There’s not a lot of parking in the town of Branford – a few spaces along the water, some street parking, and the Branford Trolley Trail trailhead a half-mile away. It’s a busy coastal town in the summer, so the best solution is just to show up early (8AM or so). 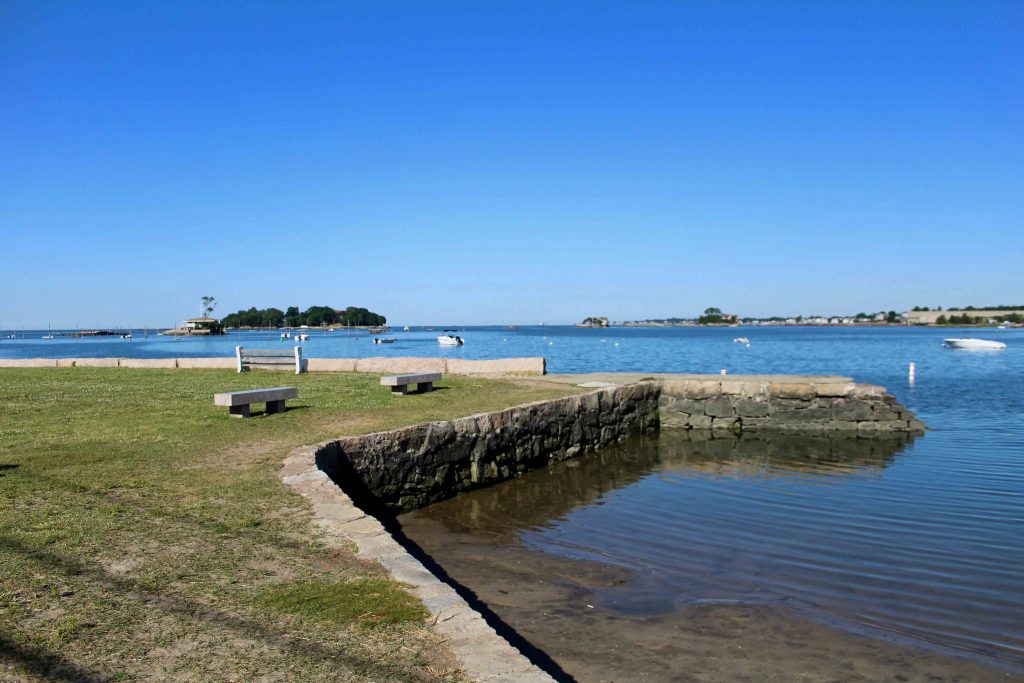 Unlike the other two locations, exploring the Thimble Islands is pretty freeform. Just weave in and out of the different islands, checking out whatever catches your eye. Nearly all of the Thimble Islands are privately owned, so this trip doesn’t allow as much exploration on land as the others.

In theory, Connecticut law allows kayakers to pull their boat ashore up to the high-tide mark. But the granite of the islands rises straight out of the sea, with no gravel or sand for you to land on, and there’s not much you’d be able to do below the high-tide mark anyway (besides take a brief rest). 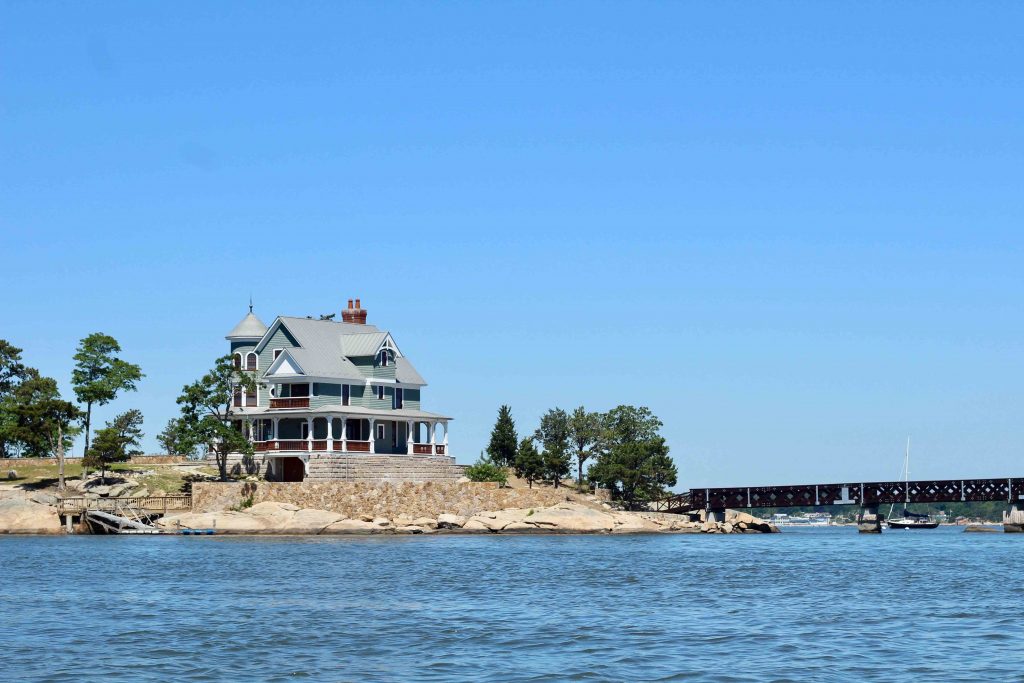 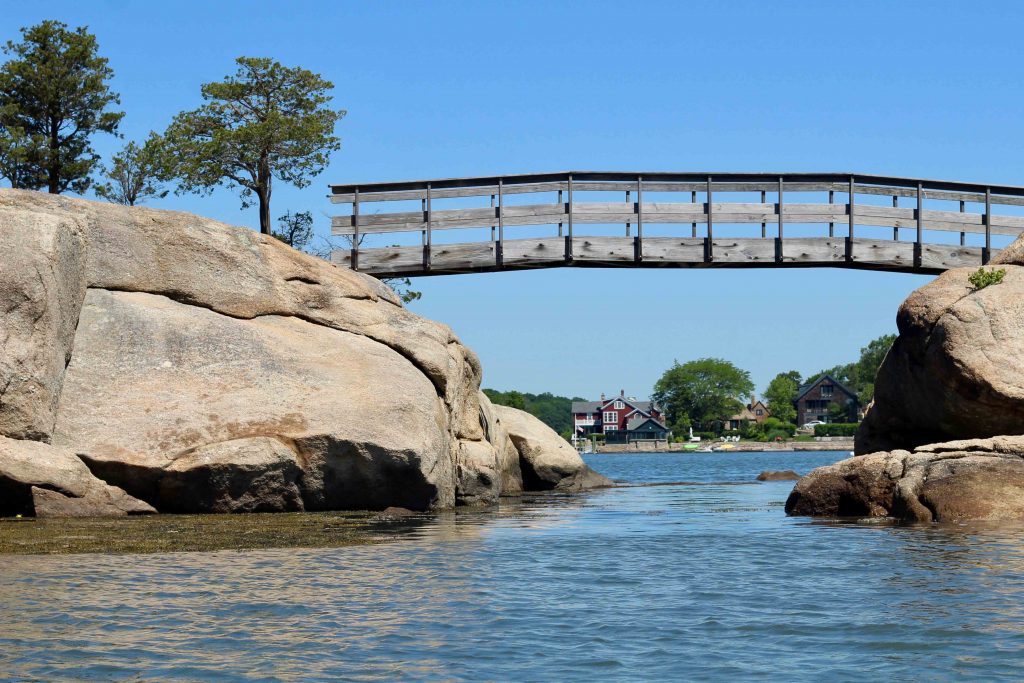 Some of the most interesting sights in this island chain are places where property owners have taken a small rocky outcropping and turned it into a place to live. For instance, the island of Exton’s Reef was so small that the owner simply built stilts into the ocean around the rock formation for his one-room dwelling to sit on.

Despite the small size of many of the islands, it is incredibly expensive real estate. Cedar Island, which is comprised of about 6,000 sq. feet of granite sticking up above the waterline, was last priced at $285,000. But it’s so small that the buyer who purchased it was surprised to find out it wasn’t zoned for building a house. Thus a gazebo is the only thing on the island, though it looks like a pretty great place for the owners to enjoy a barbecue.

While the Thimble Islands don’t provide as many opportunities for getting out and exploring as the routes near Portland or Portsmouth, there are still plenty of sights to see. 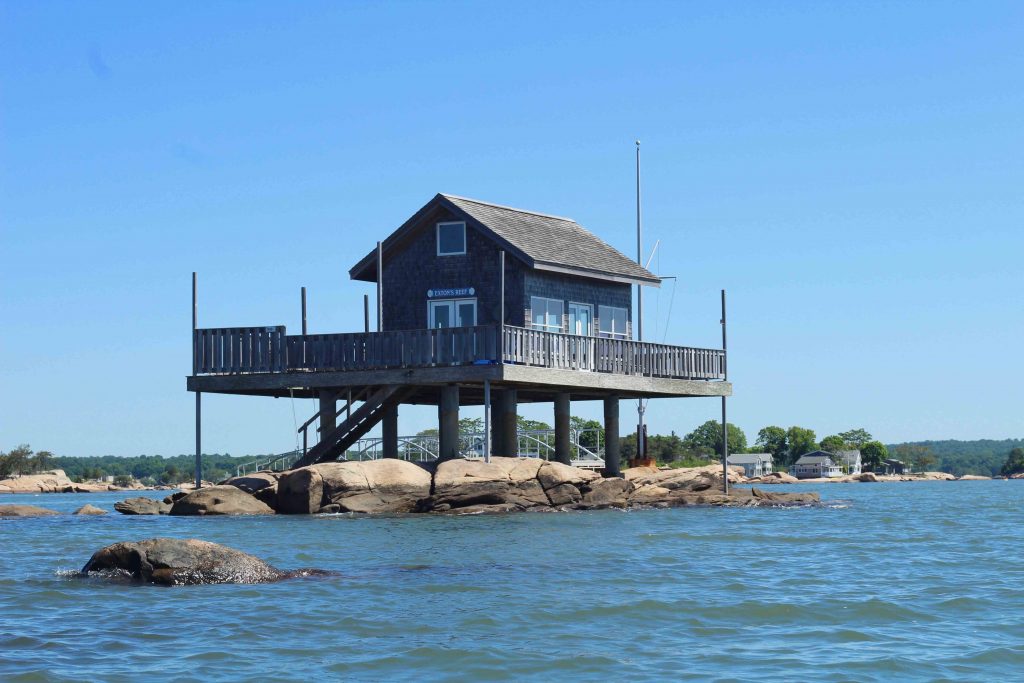 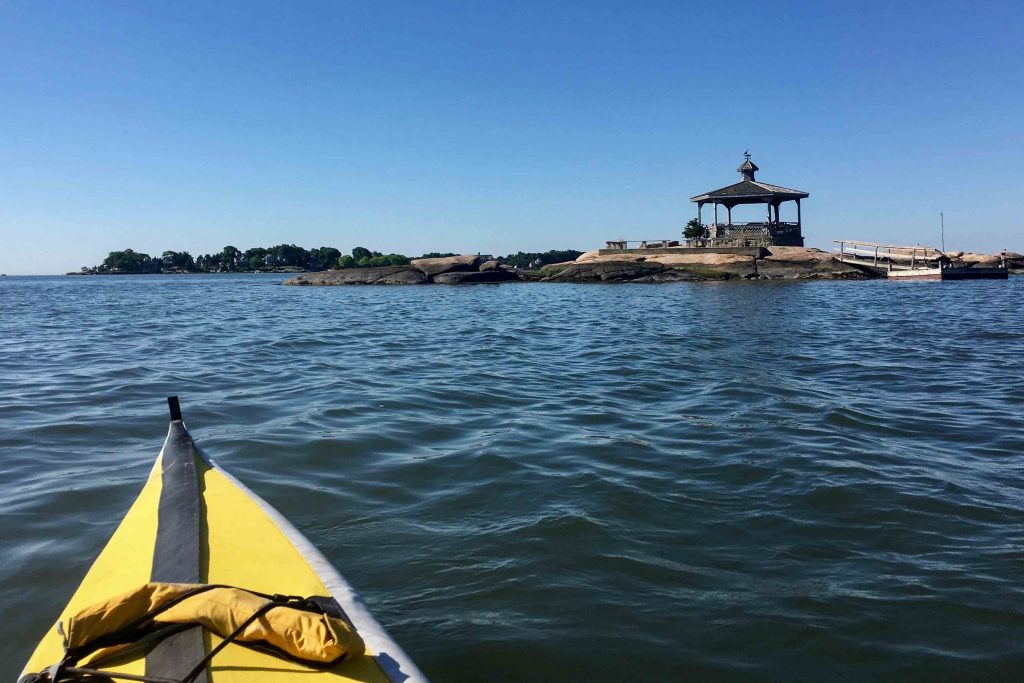 One notable exception to all the private islands in this area is Outer Island, which comprises part of the Stewart B. McKinney Wildlife Refuge and is open to the public during the summer.

There’s usually a ranger staffing the island, and if they’re not too busy leading a school trip, they’ll be glad to show you around the island and tell you more about its history. Bathrooms and picnic tables are also available, making this a great place to stop for lunch or lounge away the afternoon. 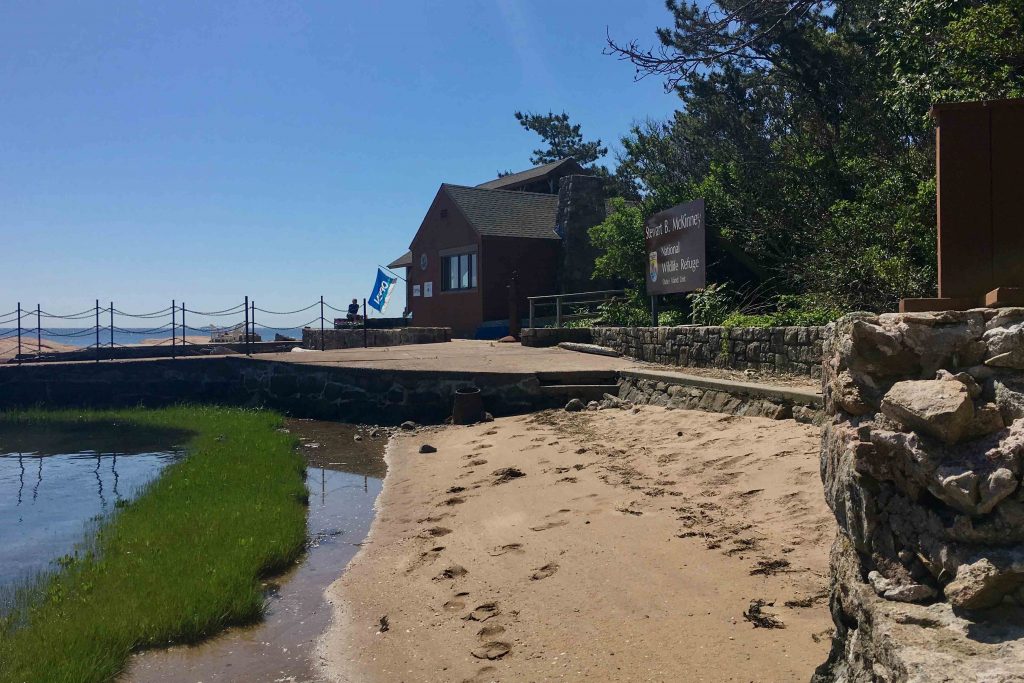 What’s your favorite place to go kayaking in New England?