“Wisdom can only be obtained from the viewpoint of solitude.”

These were the prophetic words of Jack Kerouac in his collection of short stories, Lonesome Traveler. He should certainly know, having spent two months at a fire lookout atop Desolation Peak in northern Washington during the summer of 1956.

At a 6,100-foot-high point that’s 15 miles from the nearest road, he spent his days searching the horizon for hints of smoke that he would relay to fire crews down below. In the absence of impending fire, Kerouac had a lot of time to contemplate the meaning of life and his future direction. His time at the lookout even inspired two novels: Desolation Angels and The Dharma Bums.

While fire lookouts were critical for fighting forest fires throughout the 20th century, their usefulness has waned in the age of satellites and cameras that can spot smoke better than humans. Like fire lookouts, other types of Forest Service cabins have also become preserved pieces of history.

Many former ranger stations have similarly fallen out of use, as have cabins built as living quarters for trail crews in the first half of the 20th century, when trails were being developed to accommodate America’s newfound interest in outdoor recreation.

Staying in a Forest Service Cabin

While some these jobs might be obsolete, Kerouac’s experience is fortunately not a bygone relic of the beatnik era – you too can experience the self-reflection that comes with being the lone inhabitant of a mountaintop abode, at least for a couple days. Now, decommissioned fire lookouts and other Forest Service cabins across the U.S. can be reserved by the general public for overnight rental.

Of course, the self-reflection is optional; these cabins are also a practical alternative if you want to enjoy nature but aren’t into sleeping in a tent or are just looking for a unique experience in the woods. The fire lookouts have the added advantage of being built far above treeline – where you would normally be prohibited from (or at least strongly advised against) camping.

While many of the cabins are tiny, some can accommodate up to twenty people, making them great places to gather with friends and family (or even throw a bachelor party).

Plus, some of the Forest Service’s cabins are available for rent year-round. If you’re not interested in sleeping in a snow-covered tent, the cabins can open up new possibilities of winter camping. And during cross-country season, it’s like a ski-in/ski-out rental home without all the requirements of being a millionaire.

If you’re going in the winter, though, check the amenities list carefully; you don’t want to arrive at your cabin without a means of starting the woodstove or propane heater.

Fire lookouts and other Forest Service cabins are usually pretty bare bones. You might get a bunk with a worn-out mattress, a table, a propane stove for cooking, a wood stove for heat in the winter, and some cooking utensils, but don’t expect much more than that. Still, it’s definitely more luxurious than sleeping in a tent and eating dehydrated meals out of a bag.

Instead of waking up to a tent full of condensation, you can enjoy the sunrise over the mountains from your bed. (And not all cabins are Spartan – some have electricity and even showers, but they’re the minority.)

Most fire lookouts and other Forest Service cabins are located in the western U.S., from the Rocky Mountains to the Pacific – where much more land is set aside for national forests and parks.

If you’re in New England, though, an alternative is the White Mountains Huts, scattered along the Appalachian Trail in New Hampshire. The huts are a different experience than the traditional Forest Service cabins, though, as they’re hostel-style lodges where you can reserve a bed. Rather than the solitude of a desolate peak, you’ll find the party atmosphere that can only come with a hundred dirty and hungry thru-hikers.

But what the White Mountain Huts lack in privacy and solitude, they more than make up for in services, as crewmembers from the Appalachian Mountain Club pack heavy boxes of bacon, beer, and other treats up to the huts for the enjoyment of those staying there.

Given the traffic on the AT, accommodations at the huts should be reserved far in advance. But if you’re not staying overnight, don’t let that stop you from going in to chat with the people staying there (they’ve probably got some great stories to tell) and purchase some food or drinks before heading down the mountain.

The majority of fire lookouts and other Forest Service cabins can be booked through Recreation.gov. The website isn’t the easiest to navigate since it’s the same portal used to make reservations at the hundreds of campgrounds around the country. The best way is to search for campgrounds in the state you’re interested in and then filter the results to cabins or lookouts. (Or yurts! The site also lists some backcountry yurts – yes, you want to a stay in one, they’re awesome.)

You’ll usually be given the code to unlock the padlock on the cabin door when you make your reservation. Don’t forget to write this combination down! You will be very sorry if you’ve trudged a few thousand feet up a mountain and have no way to get inside your cabin.

Whether you’re looking for solitude, a gathering place, or just heat in the winter, staying at a fire lookout and or other Forest Service cabin can be a great option when trekking into the wilderness. They’re also a way to experience some of the forest’s history and understand the often-challenging lifestyle of the people who’ve worked to protect and preserve these public lands for future generations.

Have you ever stayed at a Forest Service cabin? Tell us about it in the comments! 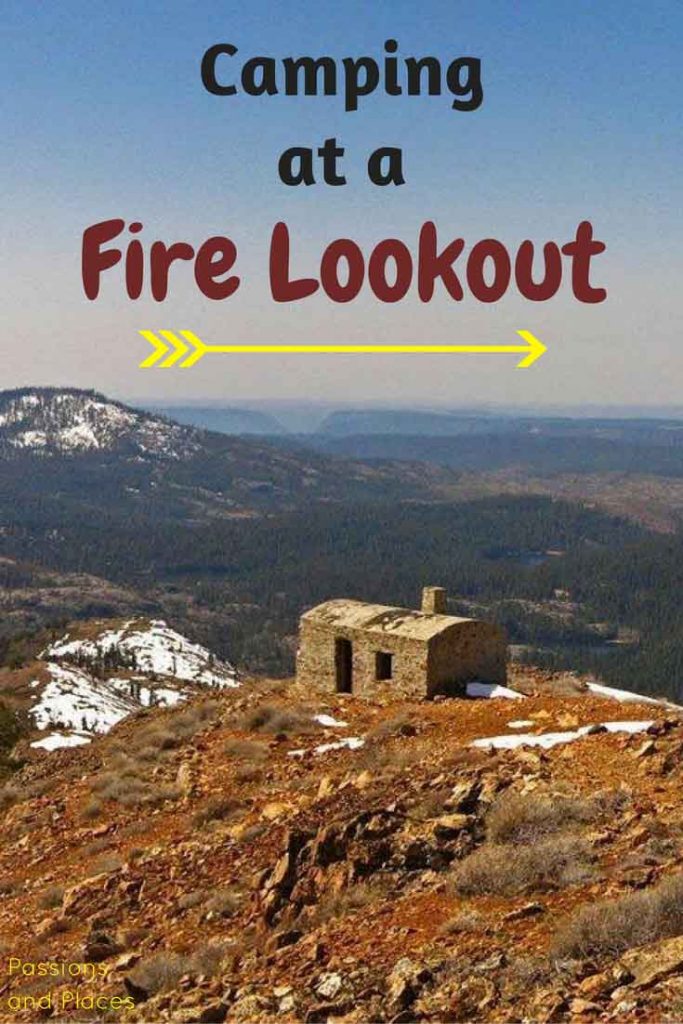